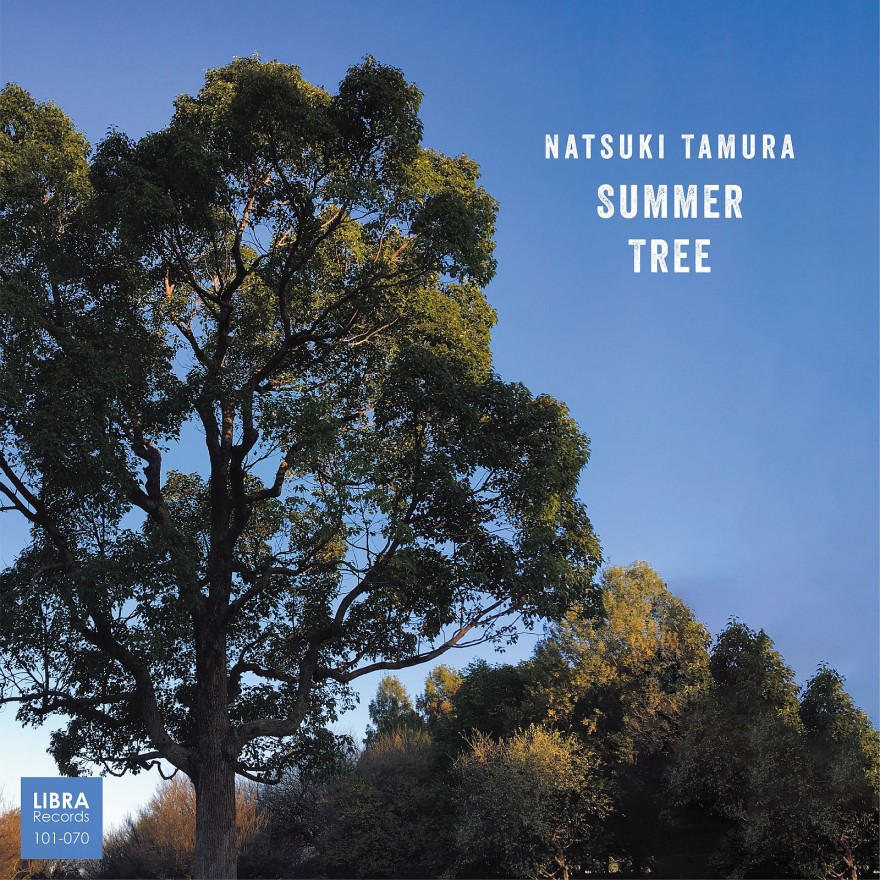 Trumpeter-composer Natsuki Tamura adds a new dimension to his unaccompanied music, several in fact, on his new multi-tracked solo album, Summer Tree. Only his fifth solo album in a career that has spanned more than five decades, Summer Tree displays all the inventiveness, lyricism, and wit as his previous solo albums, but with a few new wrinkles. For the first time, he overdubs himself, creating dense, richly textured pieces. The piano and percussion that first made an appearance on his previous solo outing, Koki (Libra Records) return to enrich his sonic palate, adding more color and texture. He also invites pianist-composer Satoko Fujii to join him for one track, not on her expected instrument, but on vocals. The music at times goes to some very dark, un-summery places but is always superbly crafted and full of surprises.

Tamura laid down a foundation track for each of the four lengthy pieces on the album, then added others on top, in a spontaneous but time-consuming process. Two of the tracks, “Summer Tree” and “Summer Dream” have composed themes played by Tamura’s muted trumpet. The other two tracks were completely improvised.

The result is unlike anything Tamura has done before. The title track and “Summer Dream” unfold slowly over low drones that resemble Tibetan horns or digeridoos, with layers of anguished howls punctuated by additional trumpet hisses and whoops. Expertly crafted and paced, they build tension that go unrelieved as Tamura’s exquisite muted trumpet melodies wend their melancholy way through the sonic turmoil. On Koki, Tamura debuted his homemade percussion setup comprised of pots and pans and wok. The metallic clang of Tamura’s kitchen-implement percussion returns on “Summer Color,” ringing like an alarm bell throughout. As the clamor relentlessly continues, faint drones hover in the background, low-register piano-note clusters explode and fade, while his trumpet snarls and grumbles. On “Summer Wind,” pianists-composer Satoko Fujii joins husband Tamura, not on piano, but on vocals. This is just the second time Fujii has recorded her unique vocalizing, which she debuted on last year’s Underground. Here she stretches out more, deploying a wide range of non-verbal vocalizations, from shrieks, trills and barking sounds to longer phrases that sound like an unknown language. Tamura, playing just piano, maintains a menacing rumble in the lower register over which enigmatic piano phrases nervously tip toe. Each piece, no matter how uncanny, invites the the listener to pay attention to all the details and nuances of the sounds. The closer one listens the more there is to hear.

Remarkably, Tamura used no post-production mixing, editing, or other manipulations to create the album’s unearthly sounds. He drew exclusively on his huge bag of extended techniques and everything you hear is as it was played.

No Tamura recording is complete without a touch of his impish humor. In this case you’ll find it in the album’s title, Summer Tree. “My name, Natsuki, is spelled by two Chinese letters, ‘Natsu’ means ‘summer’ and ‘Ki’ means ‘tree.’ I was born in summer and my parents gave me this name,” he explains.

2003 was a breakout year for Tamura as a bandleader, with the release of Hada Hada (Libra), featuring his free jazz-avant rock quartet with Fujii on synthesizer. In 2005, he made a 180-degree turn with the debut of his all acoustic Gato Libre quartet, focusing on the intersection of European folk music and sound abstraction.Now a trio, their most recent CD is Koneko (Libra), released in 2020. Writing in the New York City Jazz Record, Tyran Grillo said, “By turns mysterious and whimsical.”

In 1998, Tamura released the first of his unaccompanied trumpet albums, A Song for Jyaki (Leo Lab). He followed it up in 2003 with KoKoKoKe (Polystar/NatSat and in 2021, he celebrated his 70th birthday with Koki Solo (Libra), which Karl Ackermann in All About Jazz described as “quirky fun in an age of uncertainty.”