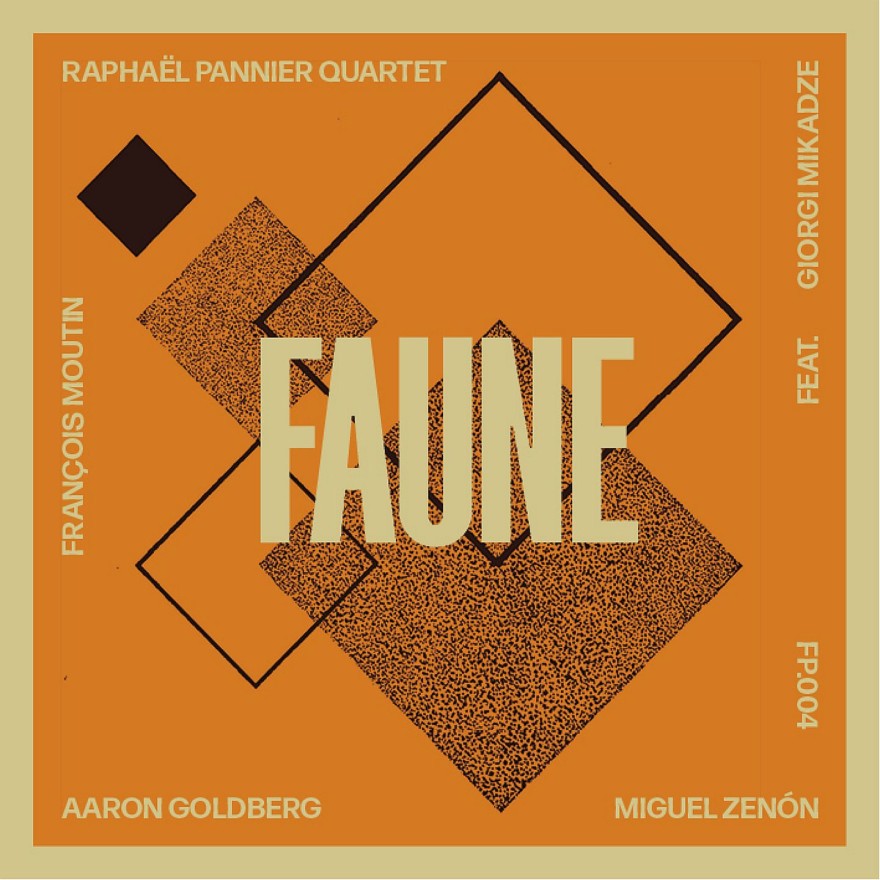 4.5 stars: “This excellent album is the debut release of French drummer Raphaël Pannier. It might do well to remember that name…. flawless drumming and compositional skills…. [The album] is at once sophisticated and complex while presenting ideas that are just right for the moment. The Pannier originals sound like the work of a fully mature musician.” – Keith Black, Winnepeg Free Press

With musical direction by one of Pannier’s key mentors, MacArthur genius and star alto saxophonist Miguel Zenón, Faune presents a sequence of the drummer’s vibrant originals along with unique interpretations of French classical works and American jazz standards. Zenón has long been recognized for his work bridging his Puerto Rican roots with modern jazz, and his phenomenal balancing of tradition and modernity. Like his mentor, Pannier also links two traditions, French classical and American jazz, in startlingly innovative ways. “This album really does bring together my two worlds: my European upbringing and early classical studies with my American life and jazz education,” Pannier says. “In this, it has been such an honor to work with Miguel Zenón, a real hero of mine for the way he has melded his Puerto Rican roots and Latin traditions with socially conscious modern jazz.”

The highly imaginative universe of Pannier’s music is reﬂected in his choice of musicians, all players dedicated to music as a deeply human form of expression. Zenón, with his expansive palette of inﬂuences, monster technique, and exceptional creativity, oﬀers magnificent, inspired saxophone solos. Pianist Aaron Goldberg brings profoundly felt, almost philosophical leanings to the keyboard with masterful improvisations and elegant playing rooted in the jazz tradition. With his self-taught styling, bassist François Moutin brings an entirely new approach to his instrument, infusing vital, foundational energy into the rhythm section. The addition of the virtuoso classical Georgian pianist Giorgi Mikadze is a key component of Pannier’s vision of melding traditional classical scores and modern jazz. Pannier brings a high level of technique to his imaginative playing, laying down complex, varied rhythms that provide rich color and texture. Presenting the band in various duo, trio, and quartet configurations adds to the bounty of shapes, textures, and colors. The French title Faune translates to “wildlife,” though it also references a mythical sense of the animal spirit famous in works of French modernism by Debussy and Mallarmé. The nod to Debussy’s famous prelude is apropos, as the album reﬂects an impressionistic sensibility, combining it with a keen rhythmic vitality.

Like Debussy, Pannier is very much a colorist of his instrument, executing performances on the drums with graphic and imaginary play, creating a sonic impressionist landscape that’s reﬂected in both his original compositions and his arrangements. “Lullaby” is a journey into dreams, “Fauna” an exploration of an imaginative forest, “Monkey Puzzle Tree” an apparitional tree with incredible harmonies. “Midtown Blues,” an aural sketch of Manhattan executed as a joyful, swinging piano trio, perfectly depicts the feeling of being bumped and bounced while walking in Times Square.
Painterly tracks include the album’s centerpiece work by Messiaen (from his 1944 piano collection Vingt regards sur l’Enfant-Jé-sus), and a selection by Ravel (from his 1917 suite Le Tombeau de Couperin). The freshly lyrical take on Ornette’s classic 1959 ballad “Lonely Woman” expresses another side of Pannier, as does the pulsing, muscular “E.S.P.” (the Shorter-penned title track to the
Miles Davis Quintet’s E.S.P. LP of 1965) and Hamilton de Holanda’s bounding “Capricho de Raphaël.” Multiple pieces, including “Forlane” and the intro/outro frames for “E.S.P.,” have additional electronic atmospherics created by Jacob Bergson.

The Ravel piece, played as a classical score with modern rhythms and textures interwoven, is just one example of Pannier’s unique approach. “Many jazz musicians have played ‘Forlane’ as jazz,” he says, “but I don’t think anyone has played the score and then re-imagined a drum part within it quite as we’ve done.” By translating the traditional classical score and adding a modern vernacular, Pannier retains and builds on the emotional authenticity of the works. The album’s cover art, an image of a work by Theo van Doesburg, reﬂects Pannier’s generous, wide-ranging aesthetic. Founder of the European artistic movement “De Stijl” at the beginning of the 20th century, van Doesburg believed in the universal power of abstract art. Playing with light and colors, simple cubic volumes, and rhythmic concrete lines, he gave birth to a refned, rhythmic new style that would inspire artists including Mondrian and the Bauhaus, and now, Pannier. Faune is a complete work of art with a level of performance and expression unusual in a debut. It traces, by its very design, the formation of a refined and timeless music, one based on the imagination and executed with virtuosity and excellence.

Born in Paris in 1990 and now living in Harlem, Pannier started playing drums at age 5 and performing professionally by 13. He earned a scholarship to the Berklee College of Music in Boston,
studying with Terri Lyne Carrington, Ralph Peterson Jr. and Hal Crook, among others. At Berklee, Pannier met Azerbaijani jazz pianist Emil Afrasiyab, with whom he began performing a unique fusion between jazz and mugham, the traditional music from Azerbaijan. Pannier completed his master’s degree at the Manhattan School of Music and was then awarded a scholarship to attend the competitive Betty Carter Jazz Ahead program at the Kennedy Center in Washington D.C., led by Jason Moran and Eric Harland. Pannier also received a scholarship to study with Mark Turner and Alex Sipiagin at the “Generations” workshop in Switzerland. The drummer won the first prize in the Six Strings Theory Competition organized by fusion guitar star Lee Ritenour, with whom he toured various festivals in the U.S., recorded in the studio and performed at the Blue Note Tokyo. Pannier has also played alongside the likes of Steve Wilson, Bob James, Marcos Valle, Eric Lewis, Manuel Valera, Rotem Sivan and Lage Lund, appearing at jazz festivals from Montreal, Paris and Tokyo to Brazil, Spain, Estonia and Azerbaijan. His performances in New York have run the gamut from Carnegie Hall and Lincoln Center to the Apollo Theater and Minton’s Playhouse. In 2018, Pannier released as a co-leader the album These Times with saxophonist Chad Lefowitz-Brown, pianist Holger Marjamaa and bassist Ben Tiberio.