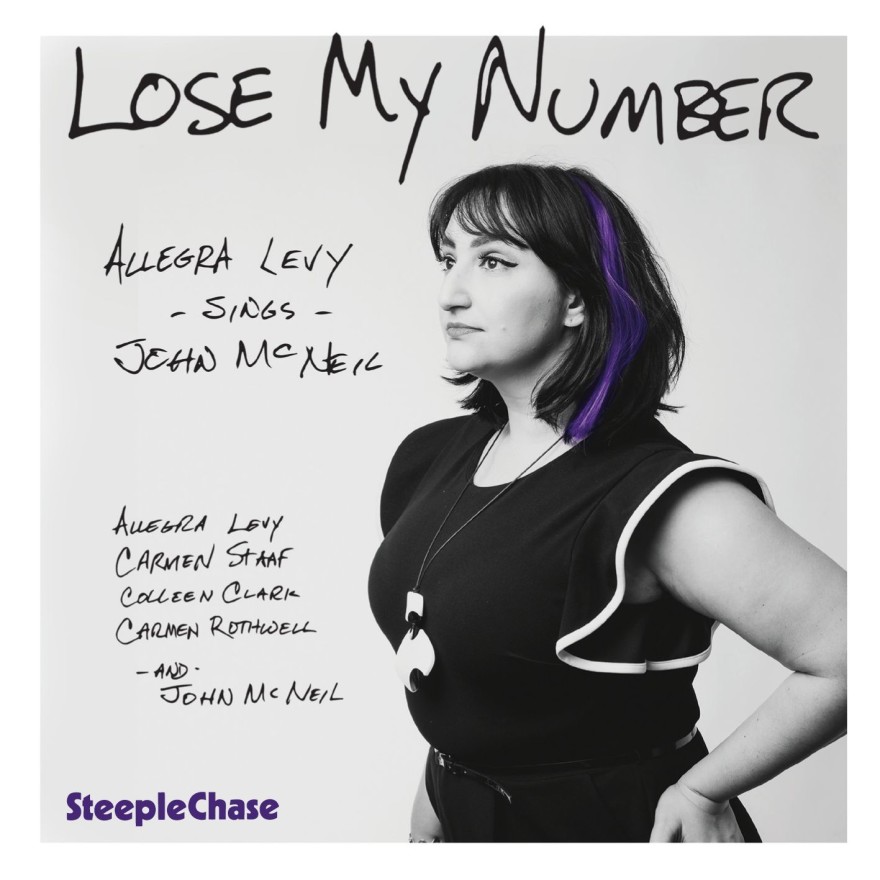 Tuesday, September 15 at 8 p.m. album release livestream from Soapbox Gallery in Brooklyn With Lose My Number: Levy Sings McNeil, jazz vocalist Allegra Levy finds a bold new voice: edgy, breezy, sassy, brassy, and often as staccato as a trumpet. That’s because this album, her fourth from SteepleChase Records – and the 900th record to be released by SteepleChase overall – is a collaboration with famed jazz trumpeter John McNeil.Levy has penned words for nine of his previously published compositions which had no lyrics until now. “I’ve always wanted to do this project,” says Levy, a rising singer-songwriter based in New York. McNeil is not only a longtime friend and mentor, but produced her first two albums – Lonely City, hailed by The New York Times as “fresh,” “exotic,” and “far beyond the ordinary,” and Cities Between Us, which prompted JazzTimes to pronounce Levy “a double-barreled talent” and “unquestionably one to watch.” McNeil himself is someone who has been watched and widely listened to since he first hit the New York jazz scene in the mid-70s, playing with the Thad Jones/Mel Lewis Orchestra, Horace Silver Quintet, and Gerry Mulligan, as well as leading bands of his own. As one of the world’s most original and creative jazz artists, he has also written a lifetime’s worth of music. But he was open to having a new take on some of those songs. “Allegra Levy’s lyrics have a somewhat cynical, noir-ish take on the world – right up my alley,” says McNeil. “Collaborating with her was an absolute joy.”

That feeling was mutual. “John is my most important collaborator,” Levy says. “He’s always been in my corner, and always been such an empathetic and important person in my life. I always felt that his melodies were really memorable, and that they told these stories.” She wanted to help give those stories new meaning. “Lyrics only add to the experience by letting people find their own stories in the music,” she says.

All these songs were first recorded by McNeil in the 1980s to early 2000’s, but adding lyrics and updating the arrangements has made them into new entities. “They’re definitely different works from what he recorded,” Levy says. “ This kind of really brings them into now.” But as current as the new record may sound, it still has a Great American Songbook quality. “The music is timeless, so I didn’t want to change it. I just wanted to bring my own voice into the picture.”

That voice comes through loud and clear in Levy’s distinctive singing style, as well as her spare and often specific choice of words. As for the project itself, one of the many words that might be applied is “feminist.” Although all the music was written by McNeil, Levy conveys her own experiences in many of his songs. With the exception of the trumpet cameos provided by McNeil on three tracks, the album features an all-woman band: Carmen Staaf on piano, Carmen Rothwell on bass, and Colleen Clark on drums. 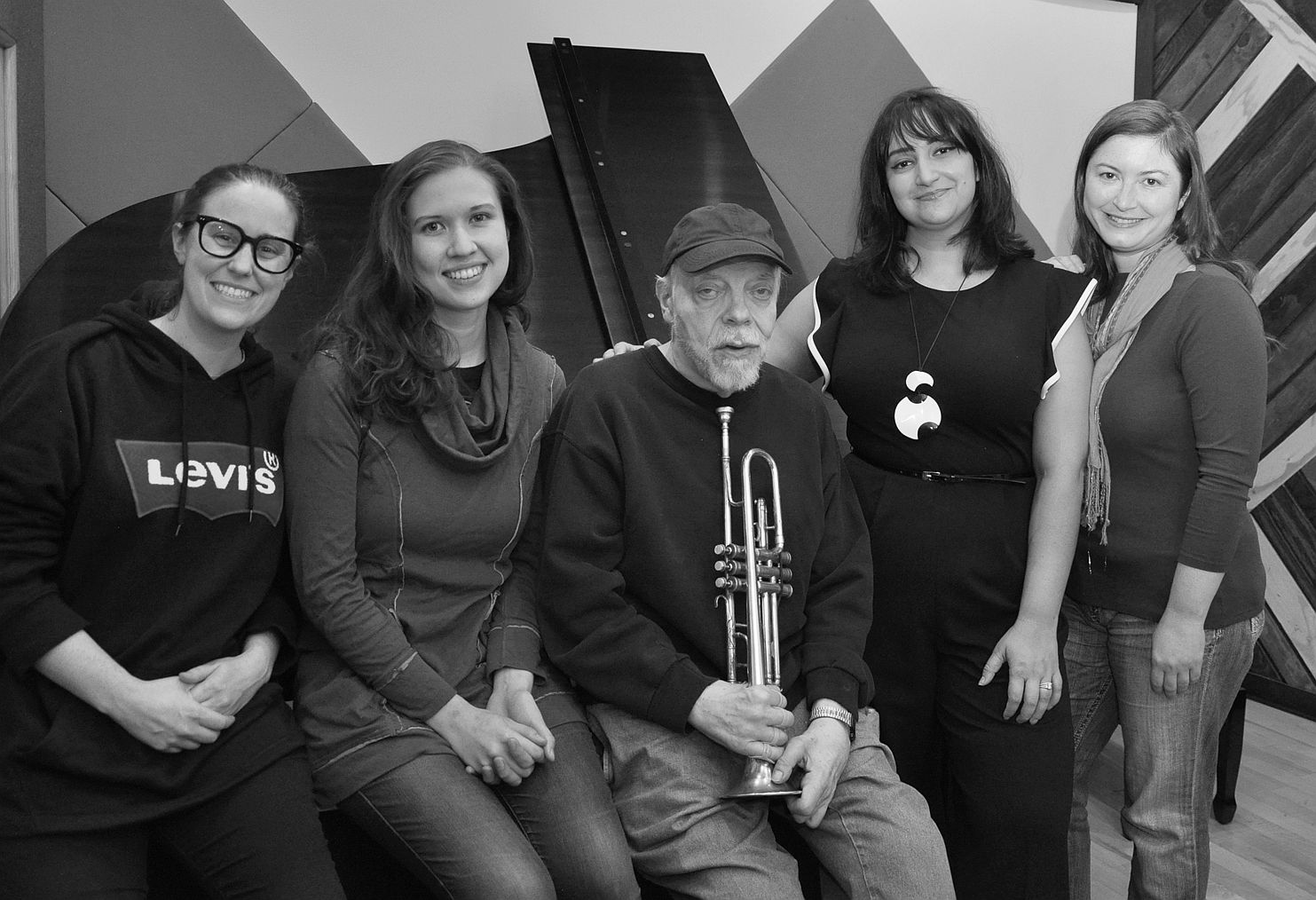 This was a choice Levy made as a member of the leadership team of the Women in Jazz Organization. Much of WIJO’s mission is “to level the playing field in the field of playing,” she explains. That goal has led her to perform more often with other women on the jazz scene. But the women she chose were also just people with whom she was excited to play. “I have to say that it was the most fun I’ve had on any session,” she says. “They played the hell out of the music.” She also felt a different kind of energy and unprecedented level of support, she says. “It was total sisterhood.”

Staaf, who won the Mary Lou Williams jazz pianist competition and is now the pianist and musical director for NEA Jazz Master Dee Dee Bridgewater, had performed on all three of Levy’s previous albums, including 2018’s Looking at the Moon, which was featured as an editor’s pick in both DownBeat and JazzTimes. Yet she had never played with bassist Rothwell before. “And Colleen Clark was just so cool. We really vibed right away when we started playing.” Having an all-female ensemble may also have helped provide a fresh new take on some classic tunes. To Levy’s knowledge, previous recordings of McNeil’s music featured male artists exclusively. “There’s this interesting dichotomy between the older male generation having written the music, and then the young female stories that are told with those melodies,” Levy notes. “I think it was important to have these strong young women’s voices play the material.”

In his New York Times review of her debut album, Ben Ratliff noted, “She’s not out to clobber you with speed… – she hangs back but arrives at the notes responsibly, without a big show, incorporating careful 1950s cool but authentic modern cynicism, too.” That was then. This is now. The modern cynicism is still there, but the notes often fly nonstop at near-lightning speed. The challenge was not only to sing McNeil’s complex, trumpet-centric compositions, but to find words that reflected each of their lives. “There’s a little bit of both of us interwoven throughout the record,” Levy says. “It was tough, because as much as John has always been in my corner, I’m my own toughest critic, and he’s a close second..” She wanted to make sure she was doing his melodies justice. Some tunes, she found, spoke to her so directly, despite their differences in both age and gender, that she thought, “This is totally a story from my life. This song is my story.’” For others, Levy sensed that there was too personal a tale behind the tune for her to insinuate herself, so she interviewed McNeil about his motivation and then tried to convey his story.

A typical example is “Tiffany,” a soulful ballad. “It was the most moving story,” Levy says. “It was his future wife’s birthday, and he’d just come off a gig.” McNeil found himself walking by Tiffany’s, the posh jewelry store, in the early morning, thinking, ‘If only I could buy Lolly something from here. Something nice.’” His abject longing led him to write a song instead. “The truth is they didn’t really need things,” Levy says. “They had each other.” Then there are the tunes that Levy’s lyrics easily allowed her to make her own. Such was the case with “Strictly Ballroom.” Although it was originally inspired by the 1992 movie of that title, Levy’s take (“We’re just dancing, not romancing. Don’t you dare! You’re no Fred Astaire!”) has transformed it into a gutsy diatribe about a man who takes too many liberties while ballroom dancing, “one of the few remaining activities in which the man is still usually the leader.” Another song, called simply “CJ,” was written by McNeil about someone he met long ago, but Levy’s lyrics – “You’re like an animal/And you don’t seem to care your disregard will bring doom and gloom” – may apply instead to an unnamed, prominent politician with decidedly different initials. The two managed to find common ground in the title track, “Lose My Number.” According to Levy, McNeil is one of the gentlest, kindest, and most compassionate people she has ever met. Yet as anyone who knows him can attest, he is also infamous for his wicked wit and an acerbic side he makes no attempt to hide. “I don’t know how else to say it, besides for he’s the most ‘lose my number’ kind of guy in many ways,” she says. “He doesn’t suffer fools and can be brutally honest.” Still, it’s a tendency shared by many. “Sometimes I feel that way too,” Levy admits. “We all feel that way.”

Levy’s first two albums, for which she penned both the music and lyrics herself, also centered on universal themes, romantic and otherwise. And in that respect, in Lose My Number she has lost absolutely nothing. “My philosophy overall is to always try to keep it simple with lyrics,” she says. “I think some of the best lyrics say the most with the least.” The most basic messages often speak volumes, she says, and speak to the most people possible. “I hope I did that here.”