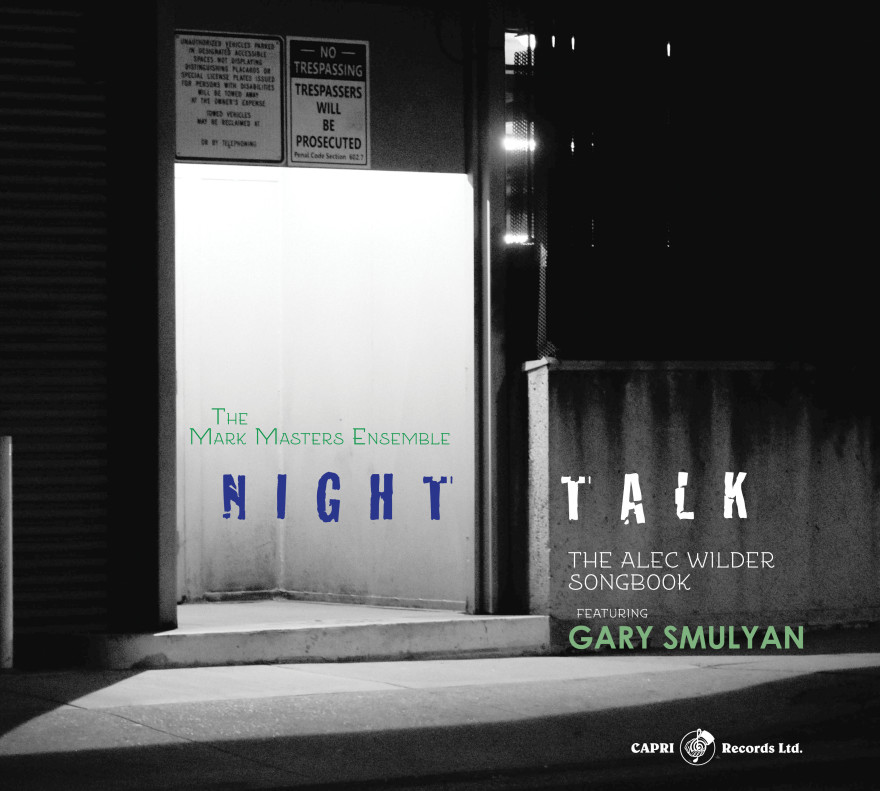 “Mark Masters is an accomplished arranger who comes up with hip, unusual ideas for jazz concerts and recordings.” – Thomas Conrad, JazzTimes

“Masters paints complex, intricate, detailed jazz landscapes, and he has always invited some of the most adventurous and innovative players into his ensemble.” – Dan McClenaghan, All About Jazz

With his sophisticated approach blending jazz, classical and American popular song influences, composer Alec Wilder was a favorite of many of the 20th century’s greatest singers and musicians. Frank Sinatra, Tony Bennett, Peggy Lee and Mildred Bailey were all avid admirers whom Wilder counted as friends and colleagues; in later decades a few of his pieces have entered the jazz canon, recorded by greats from Stan Getz to Keith Jarrett to Fred Hersch.

Mark Masters crafts evocative orchestrations from the work of composer Alec Wilder on his latest album Night Talk, featuring the Mark Masters Ensemble.  Masters delves deep into the Wilder catalogue, crafting a vibrant, richly hued collection to spotlight one of modern jazz’s most gifted and singular voices: baritone saxophonist Gary Smulyan.  The pieces are given thrilling new life by the remarkable ensemble, which includes saxophonists Don Shelton and Jerry Pinter, trumpeter Bob Summers, trombonist Dave Woodley, pianist Ed Czach, bassist Putter Smith and drummer Kendall Kay  The cream of the West Coast scene, these musicians have forged long-standing musical relationships with one another and with Masters, in some cases dating back as much as three decades.

Masters’ collaboration with Smulyan has lasted for 21 years, since he invited the saxophonist to perform his music with strings at California’s Claremont McKenna College. Smulyan was later featured on the bandleader’s 2003 Clifford Brown Project and his 2006 tribute to Gary McFarland, Wish Me Well. Masters later returned the favor by providing arrangements for Smulyan’s 2008 album High Noon: The Jazz Soul of Frankie Laine. “It’s quite possible that as far as improvised music is concerned, Gary is the greatest baritone saxophonist that’s ever lived,” Masters asserts. “Writing this project with Gary in mind, I wanted to feature him as if he was performing with a symphony orchestra. The goal was to set him apart from everything else and to highlight his sound and his unique voice. I know that whenever he’s playing it’s going to sound great, but I want to make sure that I do everything to put him and everybody else in the best light.” As always, Masters’ approach to the material soars far above the limitations of the term “arrangements;” his ingenious engagement with the source material becomes an act of total r e- composition, drawing
inspiration from each composition yet resulting in something wholly original and startlingly new. “ There’s no point in taking somebody else’s melody and leaving it completely intact,” Masters says. “Listen to all those great records Sinatra made. He had such reverence for the song. A great instrumentalist like Gary is akin to a singer, so I just wanted to let him play the melody and make it his own.”

The album opens with the fanfare-like blast of “You’re Free,” a blistering showcase for Smulyan’s nimble fluidity, a fleet-footed dance for such an unwieldy horn. “Don’t Deny” is rendered with a dapper swing feel, while the ballad “Ellen” is transformed into an elegant jazz waltz. The well-known melody of “Moon and Sand” seems to emerge unexpectedly from Masters’ reshaping, which shifts the focus to the bass line in an acting of aural sleight-of-hand. “Baggage Room Blues,” once recorded live by Stan Getz and Chet Baker, here provides the opportunity for Smulyan and the ensemble to dig into a raucous, full-throated blues. The soloist unintuitively coaxes a feather-light tone from his baritone for the lilting “I Like It Here,” while on the title track he seems to slink
through dark alleys and disreputable speakeasies. “Lovers and Losers” feels like a communal celebration, while “I’ll Be Around” offers another radical rearrangement, bursting at the seams with a brisk liveliness. It was through another longtime collaborator, saxophonist Gary Foster, that Masters arrived at Wilder as the subject of his latest project. While two of the pieces on Night Talk – “Moon and Sand” and “I’ll Be Around” – have become standards and will be familiar to most listeners, the bulk of Masters’ choices for the album are far more obscure, rarely reprises since their debuts. “The first time I heard most of these songs was when I sat at the piano with a Wilder songbook and played them myself,” Masters says. “It’s so much fun to discover new, great songs, and certainly a lot of those Wilder pieces are great songs. They’re off the beaten path in many ways, with unusual song forms and harmonic changes, and there could be a darkness to his writing. All great composers in the American popular song form work with the same materials – Irving Berlin, the Gershwins, Cole Porter – but because they were so brilliant and such individuals, what they did stood apart. The same is true with Wilder.”

Mark Masters
Long recognized as one of the great jazz arrangers of the last few decades, Mark Masters formed his first ensemble in 1982. He’s gone on to found the non-profit American Jazz Institute and has recorded tributes to Jimmy Knepper, Clifford Brown, Dewey Redman and other greats. The vehicle for his transformative orchestrations, The Mark Masters Ensemble, has featured some of the music’s most revered performers, including Billy Harper, Tim Hagans, Gary Smulyan, Peter Erskine, Steve Kuhn, Ray Drummond and Oliver Lake. His most recent album, Our Métier (2018), assembled an all-star band of creative musicians to perform his own original works. Prior to that he reimagined works by Gerry Mulligan and Charles Mingus on 2017’s acclaimed Blue Skylight. He has been named a Rising Star Arranger in the annual DownBeat Magazine Critics Poll on numerous occasions.