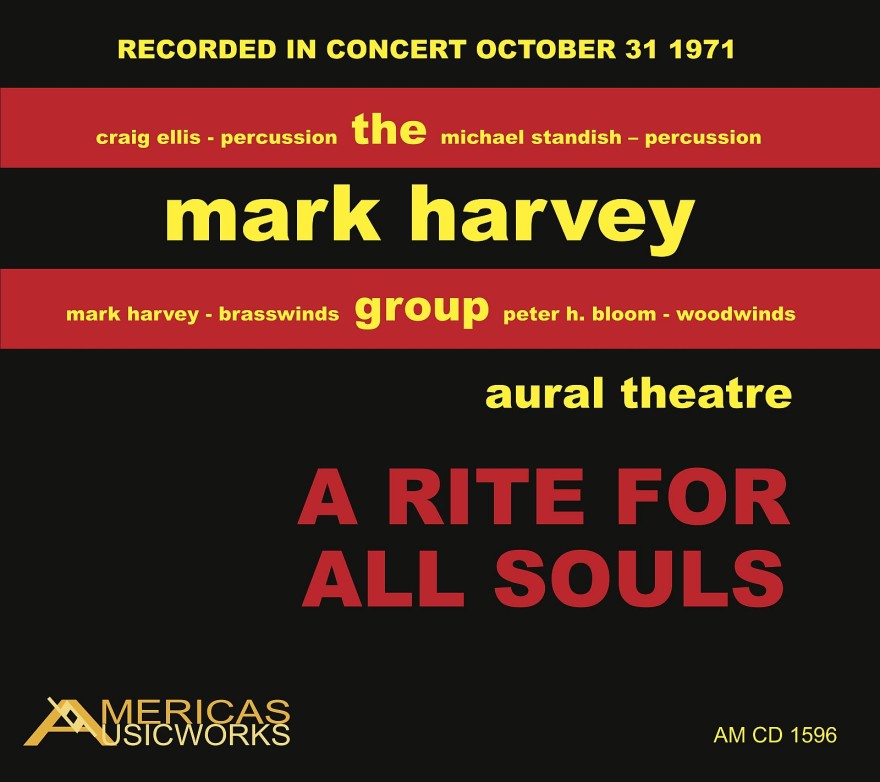 “A beautiful historical and musical document.” – MusicZoom (Italy)
“A unique rhythmic sensibility generally eschewing motions of swing in favor of space, abstraction, breadth, and silence….Most important is the level of exploration from calm to sweetly cacophonous as led by Harvey’s trumpet and Peter Bloom’s tenor sax.” – The Vinyl District

Trumpeter, composer and bandleader Mark Harvey has been an uncompromising explorer of new sonic territories for decades. He has performed in David Douglas’s Festival of New Trumpet Music; appeared at the Knitting Factory, the Village Gate, the Public Theater, Roulette, the Berlin Jazz Festival, and the Baja State Theater (Mexico) among others; and shared the stage with Jaki Byard, Geri Allen, Ricky Ford and other luminaries. As a concert producer, he nurtured the early careers of notables like pianist James Williams, vibist Walt Dickerson and saxophonist Marion Brown. Among Harvey’s 200 works are pieces written for and premiered with jazz legends Joe Lovano, Sheila Jordan, Steve Turre, Jimmy Giuffre, and Ran Blake. Harvey is founder and music director of the internationally acclaimed Aardvark Jazz Orchestra now in its 48th season.

His early quartet, The Mark Harvey Group, featuring woodwind player Peter H. Bloom and percussionists Craig Ellis and Michael Standish, takes listeners on an epic journey of discovery in A Rite for All Souls. The album reaches across nearly 50 years from a time of great social turbulence in the US to deliver a message of protest, compassion, and healing that resonates today. The fully improvised 90-minute concert encompasses serenity and turmoil, ravishing sounds and silence, poetry and melody. Harvey discovered the reel-to-reel tapes in his basement, and when he and Bloom listened to them for the first time in five decades, “We knew this was something special that deserved to be heard,” Harvey says. The exquisite monaural recording has been digitally remastered for release in a 2-CD set, available at www.americasmusicworks.com 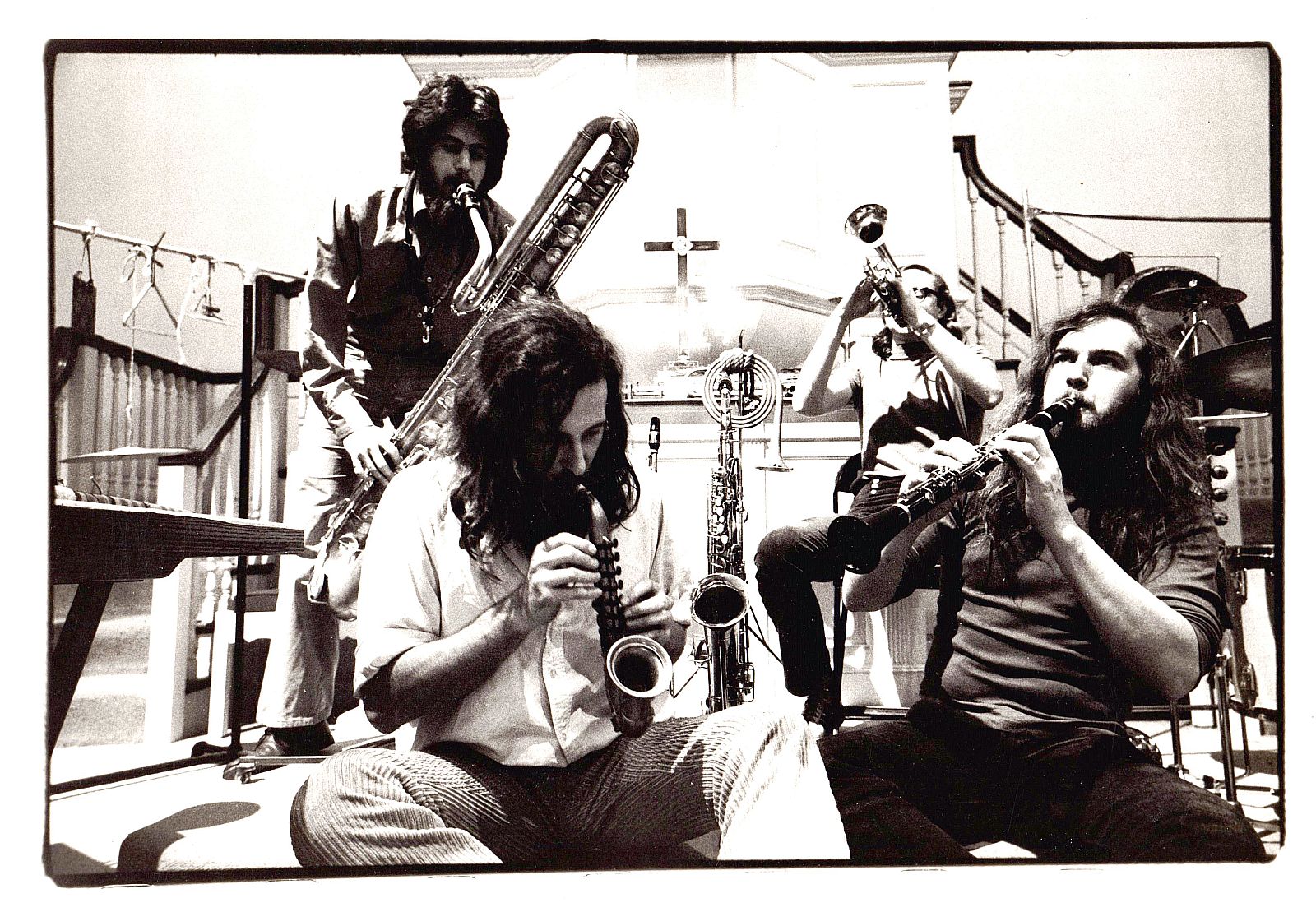 A Rite for All Souls was performed October 31, 1971, at Boston’s Old West Church, where Harvey, a Methodist minister, was pursuing a jazz ministry modeled on the work of his mentor John Garcia Gensel at Saint Peter’s in Manhattan. The Mark Harvey Group was mourning, protesting, and commemorating the tragic losses of the Vietnam War, and the lives lost or threatened by poverty, discrimination, and inequality. Their music was a celebration and meditation, honoring souls departed and souls surviving during that turbulent time in American culture. “Today, we find ourselves in another dark and tumultuous time,” says Harvey. “A Rite for All Souls speaks for all of us, as we share sorrow, anguish and compassion. Then, as now, we search for spiritual healing and the rediscovery of a common humanity.”

A Rite for All Souls is a powerful statement of the group’s aesthetic vision, captured in the phrase “aural theatre.” Lit by candles, the chancel of the Old West Church (the concert “stage”) was crowded with exotic percussion instruments and “found” sound-making devices, arranged in sculptural form. Two enormous tarot cards—The Tower and The Moon—were positioned on stage. “We thought of our performance space as a conceptual installation,” Bloom says. As the concert unfolded, the musicians moved throughout the space. At one point, they left the room, and returned wearing monk’s robes and playing organ pipes. As always, the group performed without score or musical notation. Bloom says, “When it came to the Rite, our intention was to explore particular artistic, social and spiritual territory. We chose four poems to recite as landmarks during the performance. But there weren’t specific cues, so it all developed very organically.”

The concert’s ritualistic opening, “Invocation,” begins with soft tones of mysterious identity, played on flute, a length of pipe, and a saxophone mouthpiece. Craig Ellis’ melodic trap drum solo ushers in Bloom’s tenor, with his big, embracing sound. A conversational exchange between Harvey and Bloom sets the stage for Ellis’s recitation of Gary Snyder’s, “Spel Against Demons,” that concludes with the foursome chanting in Sanskrit and leaving the stage. They return in their monk’s robes blowing organ pipes for “Fanfare.” A dialog between tenor and trumpet introduces Standish reading William Butler Yeats’ apocalyptic “The Second Coming.” Bloom’s tenor solo spirals in a widening gyre to a burning climax. Then Harvey’s trumpet solo offers contrasting intensity with benevolent lyricism, a broad yet distinctive tonal palette, and judicious use of silence as a frame for his phrases and tones. The ensemble creates the dramatic arc of the performance through a dialectic between group and individual passages, the ebbing and flowing in the dynamics and density of the music, and the interplay of timbres, rhythm, and melody. You can hear the operatic tension on the second disc as the muted dynamics and textures of the group set up Ellis to read his poem, “Napalm: Rice Paper.” A sorrowful, compassionate response by Bloom on soprano and Harvey on French horn follows, until the accumulated outrage of the poem seems to erupt in a lengthy, powerful percussion duet. Throughout the performance, percussionists Ellis and Standish collaborate with finesse. From Ellis, we hear range and depth: propulsive grooves, sonic explosions, and subtle use of space. Standish’s concise and nuanced work on small percussion instruments provides elegant punctuations, ever-suited to the moment. “Michael invariably delivered le son juste,” Bloom observes. “A Rite for All Souls has powerful relevance today,” Harvey says. “We live in tumultuous times, and, as Albert Ayler said, music is the healing force of the universe. There are moments that are turbulent, and the music reflects that, but overall we were trying to point in a direction toward progress and healing.” 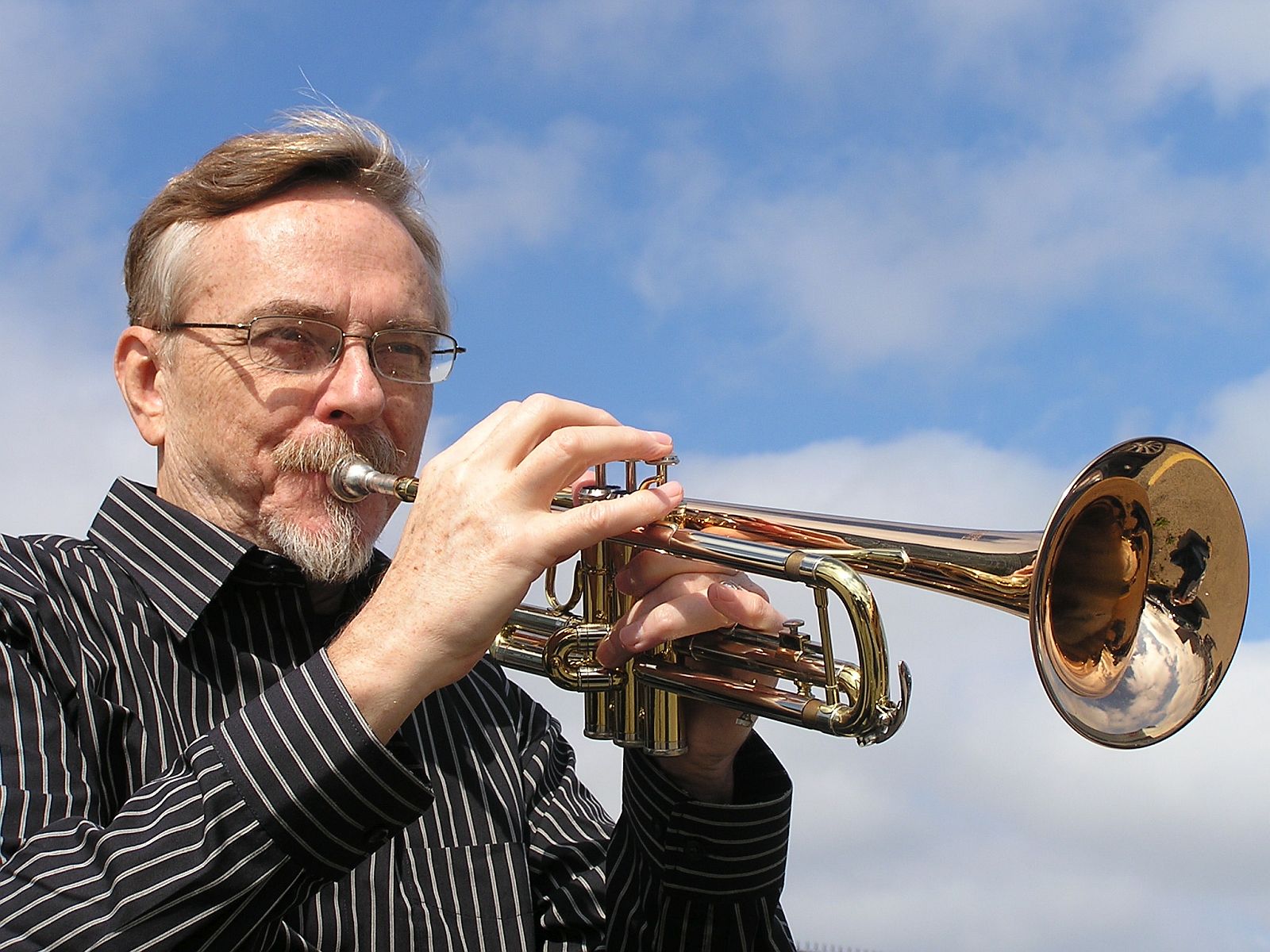 Trumpeter, composer, educator, minister, and jazz community activist Mark Harvey has been a force in the Boston jazz scene and beyond for 50 years. Between 1970 and 1983, he worked on behalf of the Boston jazz community as the founder and director of the nonprofit Jazz Coalition, the Jazz Celebrations concert series, the Jazz All Nite Concerts, and Boston Jazz Week festivals, all of which presented both resident and visiting artists. In 1973, he founded The Aardvark Jazz Orchestra, which he continues to lead as music director, principal composer and arranger. The band opens its 48th season this fall. The orchestra, which Jazz Podium called “one of the best jazz ensembles in the world,” has released 16 CDs, including 10 discs on Leo Records. As a trumpeter, Harvey has recorded with George Russell and Baird Hersey, and has appeared with Gil Evans, Claudio Roditi, Howard McGhee, Sam Rivers, Kenny Dorham, and many others. The Jazz Journalists

Association named him a Boston Jazz Hero in 2015, and in 2019 Jazz Boston honored him with the Roy Haynes Award for “exceptional contributions to jazz and the jazz community.” Harvey is also music director of Kate Matson’s FiLmprov. 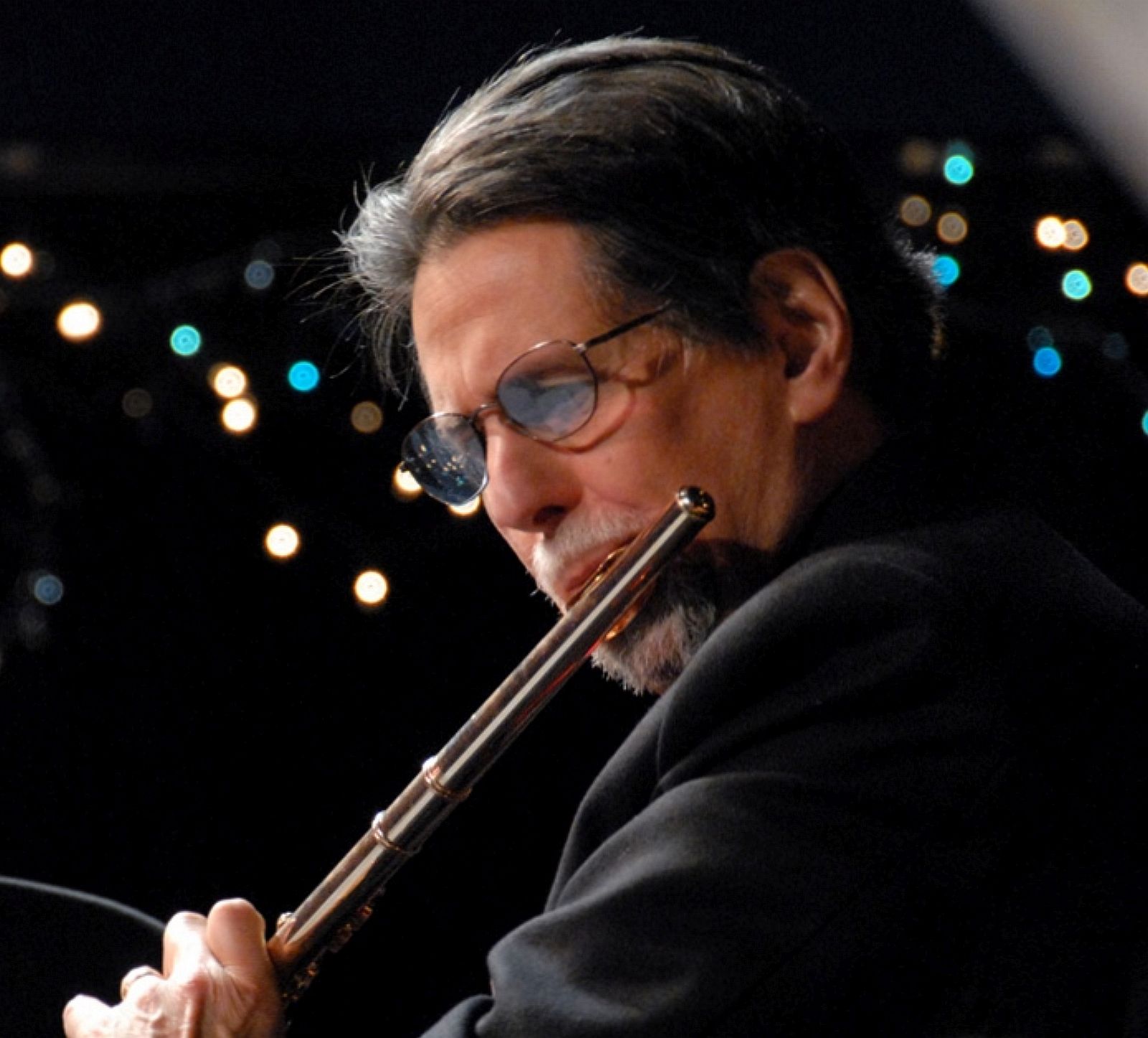 Peter H. Bloom has performed widely across multiple genres in a career spanning five decades. He has performed with Mark Harvey since 1969 and been a member of The Aardvark Jazz Orchestra since 1976. In addition, he has performed with the Makrokosmos Orchestra, is a founding member of the jazz and tap ensemble, the Modernistics, has played with FiLmprov since its creation in 1996, and has led his own jazz groups for decades. Jazz Improv praised his “exquisite melody…the improvisations growing organically out of the theme.” As a recitalist and chamber musician, Bloom has toured the world with Ensemble Aubade, Fortunato Ensemble, Ensemble Chaconne, the Henning Ensemble, and other groups. Composers such as Elliott Schwartz, Richard Cornell, Elizabeth Vercoe, Narong Prangcharoen, Edward Jacobs, Karl Henning, Pamela Marshall, and Richard Nelson have written for him. His discography includes 47 recordings on labels including Sony Classical, Navona, Dorian, Leo Records, 9Winds, and many others.