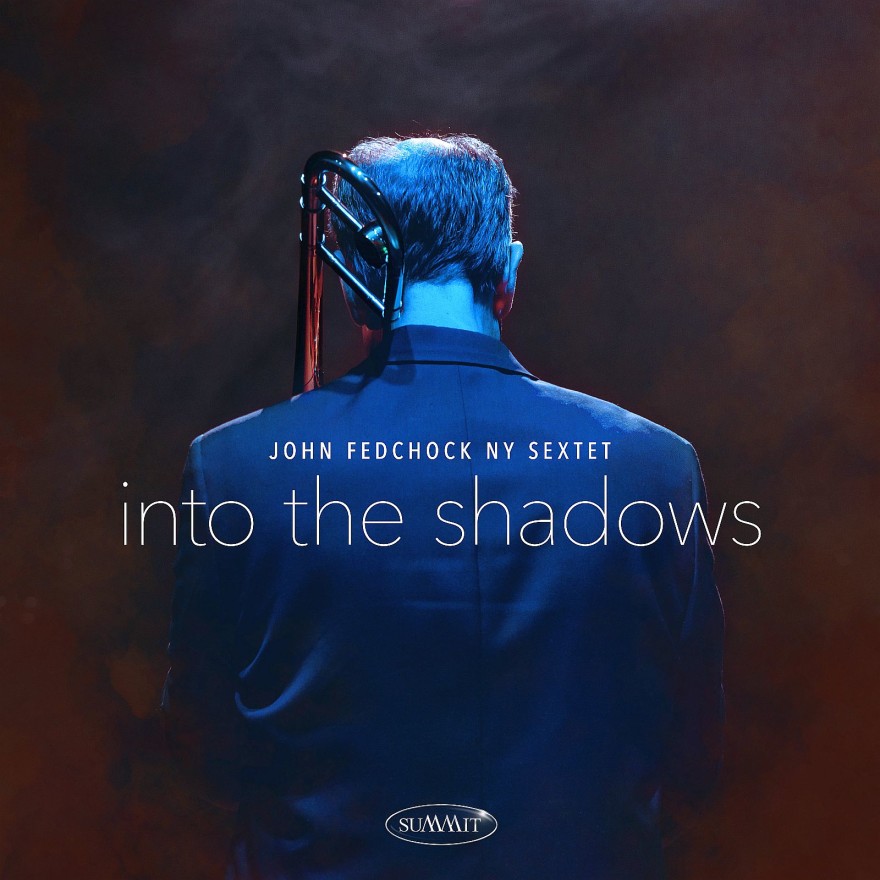 “This is modern music that is symmetrical and harmonious and therefore a joy to the ear.” – AllMusic

“This tight sextet is astounding.” – Jazzscene

The John Fedchock NY Sextet recording Into The Shadows – to be released by Summit Records on July 17, 2020 – is the trombonist’s tenth album as leader, this time with an all-star group showcasing Fedchock’s notable solo skills and bringing his special composing/arranging to the forefront. The recording features new treatments of familiar standards coupled with five Fedchock originals in a dynamic album capturing a seasoned group of veterans. Fedchock shares the spotlight equally with the sextet’s other top-notch soloists: trumpeter Scott Wendholt, tenor saxophonist Walt Weiskopf, pianist Allen Farnham, bassist David Finck, and drummer Eric Halvorson.

Although he’s garnered many accolades and GRAMMY award nominations for work with his New York Big Band, Fedchock explains his foray into the smaller format:  “Working with the sextet is the best of both worlds. While still giving plenty of space for individual soloists, the configuration offers unique, creative writing options and maintains a sleek and mobile blend.” Fedchock updates standards with a 21st century feel through his modernized arrangements while still embracing the heritage and provenance of the music. Considering the history of legendary sextets in the jazz canon, Fedchock understands that those groups “set an extremely high standard, so my biggest challenge in forming this NY Sextet was to honor that distinguished tradition and create something individual.”

Fedchock’s NY Sextet has been in existence for nearly 20 years. It was first heard on a few tracks on Fedchock’s 2000 release, Hit The Bricks (Reservoir), which initiated the official formation of the band. The group’s 2010 release, Live At The Red Sea Jazz Festival (Capri), showed a glimpse of the sextet at a large international showcase. AllAboutJazz called the performance “electrifying” and declared Fedchock “a wildly creative composer who suggests melodies that turn into spectacular edifices.” Improvijazzation Nation exclaimed, “When you experience the levels of intensity they are playing, you know you’re in the presence of jazz royalty, no doubt!”

With Into The Shadows, the trombonist’s acclaimed composing is clearly on display, featuring fresh writing anointed with Fedchock’s indelible musical signature. Five Fedchock originals cover the gamut of styles and emotions, honoring but not imitating music from history’s great sextets. The opening track RSVP starts off with a bit of abstract dissonance before opening up into familiar chords and an infectious Latin groove. Alpha Dog, the assertive shuffle, harkens back to memories of Art Blakey’s Jazz Messengers, but Fedchock’s harmonic approach gives the tune a decidedly updated sound, taking away any intent of a “retro” message.  Manaus, dedicated to the city in Brazil’s Amazon region, is smooth and warm, with a seductive melody and lush horn harmonies. The title track, Into The Shadows, inspired by Fedchock’s introspective time writing at the Yaddo artist’s retreat, is a lamenting theme with a fragile allure. His a cappella trombone introduction sets the mood of solitude, and dense harmonies create a solemn tone for reflective solos by Fedchock, Wendholt and Farnham.

Fedchock’s distinctive arranging style puts each of the three well-known standards into a completely new and different light. I Should Care, normally performed as a ballad, is treated as an up-tempo vehicle offset with a disjointed rhythmic vamp to keep things off balance. An Afro-Latin setting transports the classic Nature Boy deep into the rainforest, giving the theme an added depth and heightened intensity. And Star Eyes, a straight-ahead standard played by many bebop masters, is totally transformed utilizing bright post-modern harmonies and a churning even-eighth feel that eventually relents to Fedchock’s trombone in a masterfully swinging extended solo. And although an original melody, RSVP is actually a contrafact that Fedchock describes as a “reply” to the chord changes of the old standard, Invitation. Closing out the session is On The Edge, Fedchock’s energetic blues theme, culled from his 1998 big band release of the same name. It is the album’s most straight-ahead tune set in an open blowing format, showcasing each player’s mastery of the music while displaying a relentless and undeniable groove, right to the final note.

Regarding his stellar sidemen, Fedchock says, “All are master improvisers who not only thrive within a modern framework, but also have not forgotten how to swing in a genuine and profound way. Players with these qualities give me the freedom to experiment with vintage repertoire by adding a new viewpoint while still maintaining the true essence of the material.”

In recent years, Fedchock has focused on featuring his virtuosic trombone in small group projects, most notably with his quartet. His two releases Fluidity and Reminiscence (Summit) brought praise from critics including DownBeat, who observed, “With a golden tone and powerful delivery, Fedchock leads the quartet through standards and originals, delivering a timeless brand of hard-bop that’s free of cliché.” The New York Times has heralded Fedchock for his “dazzling trombone virtuosity.” His style eschews mere pyrotechnics for a relaxed lyricism and his sound is inviting and perfectly articulated.

Amidst it all, Fedchock has continued to keep his critically lauded 16-piece New York Big Band on the front burner.  The stellar unit, which has set the standard for modern, post-swing large ensembles for over three decades, has become a marquee group bringing Fedchock to the GRAMMY finals twice for his notable arranging skills.  The band has been stunningly captured on four Reservoir releases and one for MAMA Records.

Born in Cleveland, Ohio, Fedchock began his career in 1980 as a jazz trombonist with the legendary Woody Herman Orchestra, serving as featured soloist, musical director and chief arranger for Herman’s last two GRAMMY nominated albums.  Herman said of Fedchock, “He’s my right hand man. Everything I ask of John he accomplishes, and I ask a lot. He’s a major talent.” Fedchock has also toured with Gerry Mulligan, T.S. Monk, Louie Bellson, Bob Belden and the Carnegie Hall Jazz Band, and has performed as a featured soloist, composer and conductor around the world.

After the NY Sextet’s 2010 live release, DownBeat exclaimed, “Here’s hoping Fedchock can keep this group out on the road so their impressive rapport can evolve even further.” Fedchock took that comment to heart, and now, ten years later, this album is the delightful result of that evolution.