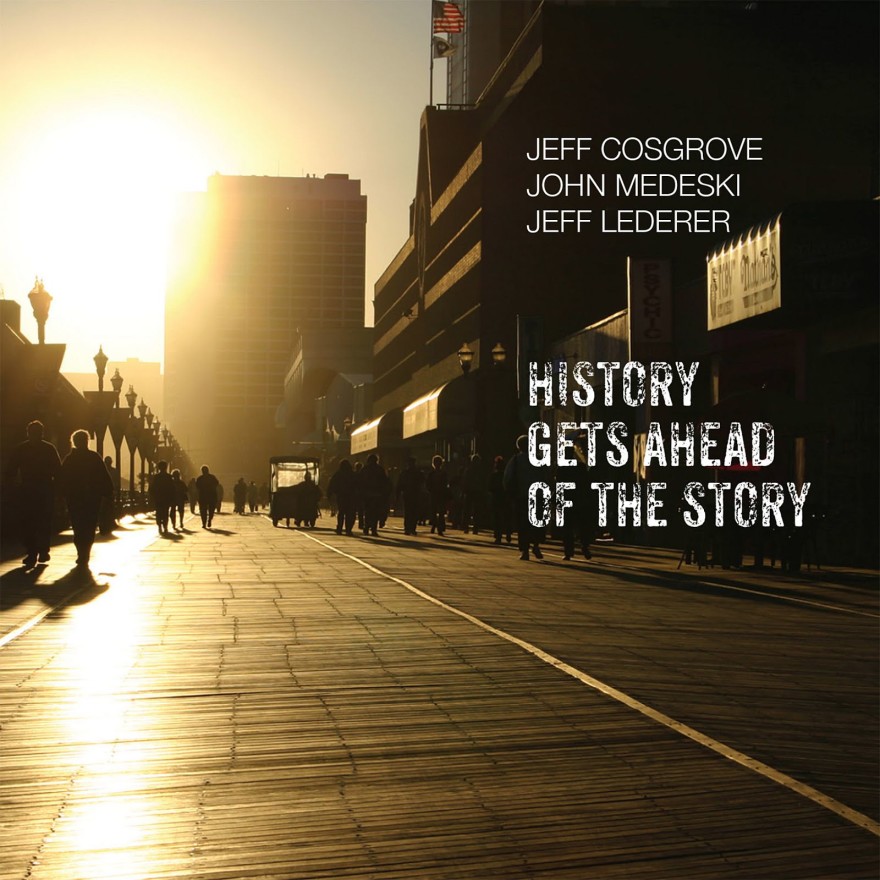 4.5 stars: “Drummer Jeff Cosgrove’s History Gets Ahead Of The Story is mesmerising on many levels. First of all, arguably a rarity in this day and age, the overall sound is like a warm blanket on a winter’s day and the punch and layered texture of the drums make the record sound even more inviting. Secondly, Cosgrove’s trio of saxophonist Jeff Lederer and organist John Medeski warmed to the challenge of performing the compositions of bassist William Parker and regularly hit bull’s eye.” – François van de Linde, Jazz Journal

“The clarity of the recording allows the listener to enter into the studio and really ‘feel’ the conversations going on with the trio and this music.  A delight from start to finish…” – Richard Kamins, Step Tempest

On Cosgrove’s sixth album as a leader, the drummer offers a unique take on Parker’s long-standing quartet repertoire by rearranging it for the classic organ trio.  This is the first album to feature William Parker’s music without Parker providing the undercurrent with his singular bass sound.

Drummer/composer Jeff Cosgrove uses his sixth album as a leader to celebrate the music of former collaborator, bassist/composer William Parker. On History Gets Ahead of the Story he is offering a unique take on the bassist’s long-standing quartet repertoire by rearranging it for the classic organ trio.  Saxophonist/composer Jeff Lederer (Matt Wilson Quartet and Bobby Sanabria’s Multiverse Orchestra) and organist John Medeski (Medeski, Martin & Wood and Hudson) push the boundaries to put their signatures on some of Parker’s most recognizable compositions. This is the first album to feature William Parker’s music without Parker providing the undercurrent with his singular bass sound.

This is a different kind of record for Cosgrove. Although the majority of the his recording catalog has focused on spontaneous composition, he is no stranger to celebrating innovative composers in their lifetime. Motian Sickness – The Music of Paul Motian, Cosgrove’s critically acclaimed 2011 debut as a leader, was released shortly before Motian’s passing. Much like the Motian Sickness project, where Paul Motian was instrumental to Cosgrove in helping with charts and giving him unlimited freedom in working with his music, Parker was involved in providing charts and guidance to the drummer. “I remember talking with William about his quartet music as we were walking to dinner one night and what an influence that band and music were on me,” says Cosgrove.  “He chuckled and simply replied: ‘those guys were pretty good at reading my mind.’”  Over the course of a couple of years, Parker provided musical scores to the drummer knowing little of how the project would take shape.

Cosgrove released two critically acclaimed recordings featuring William Parker and long-standing collaborator, pianist Matthew Shipp – Alternating Current (2014) and Near Disaster (2019). With the encouragement of Parker and Shipp, the drummer began to really push the boundaries with these performances and recordings, understanding how to bring form to the formless. It was in this time working with Shipp and Parker that the idea for this album came to Cosgrove and started to germinate.

“There is no denying William’s place at the vanguard of creative music,” says Cosgrove of his former rhythm section mate.  “But, he is also an inspiring composer which I feel often gets overlooked.  He writes beautiful and very tuneful pieces that leave a lot of room for improvisational excitement.”  Parker’s long-standing quartet with Lewis Barns, Rob Brown, and Hamid Drake had a huge impact on Cosgrove’s development. “When I first took notice of that band in college in the late 1990s, I was instantly hooked. The way that Hamid and William connected was the first thing to draw me in. As I got deeper into the music, the seamless communication between the quartet inspired a lot of my musical development.”  Cosgrove felt that this project was almost like a calling. “I wanted to do something with this music because it meant so much to me personally, but I couldn’t see the point of merely recreating it. There is so much flexibility in the way William writes that I felt like the music could take a different approach. I’ve always loved that classic organ trio sound but had never played in one.” 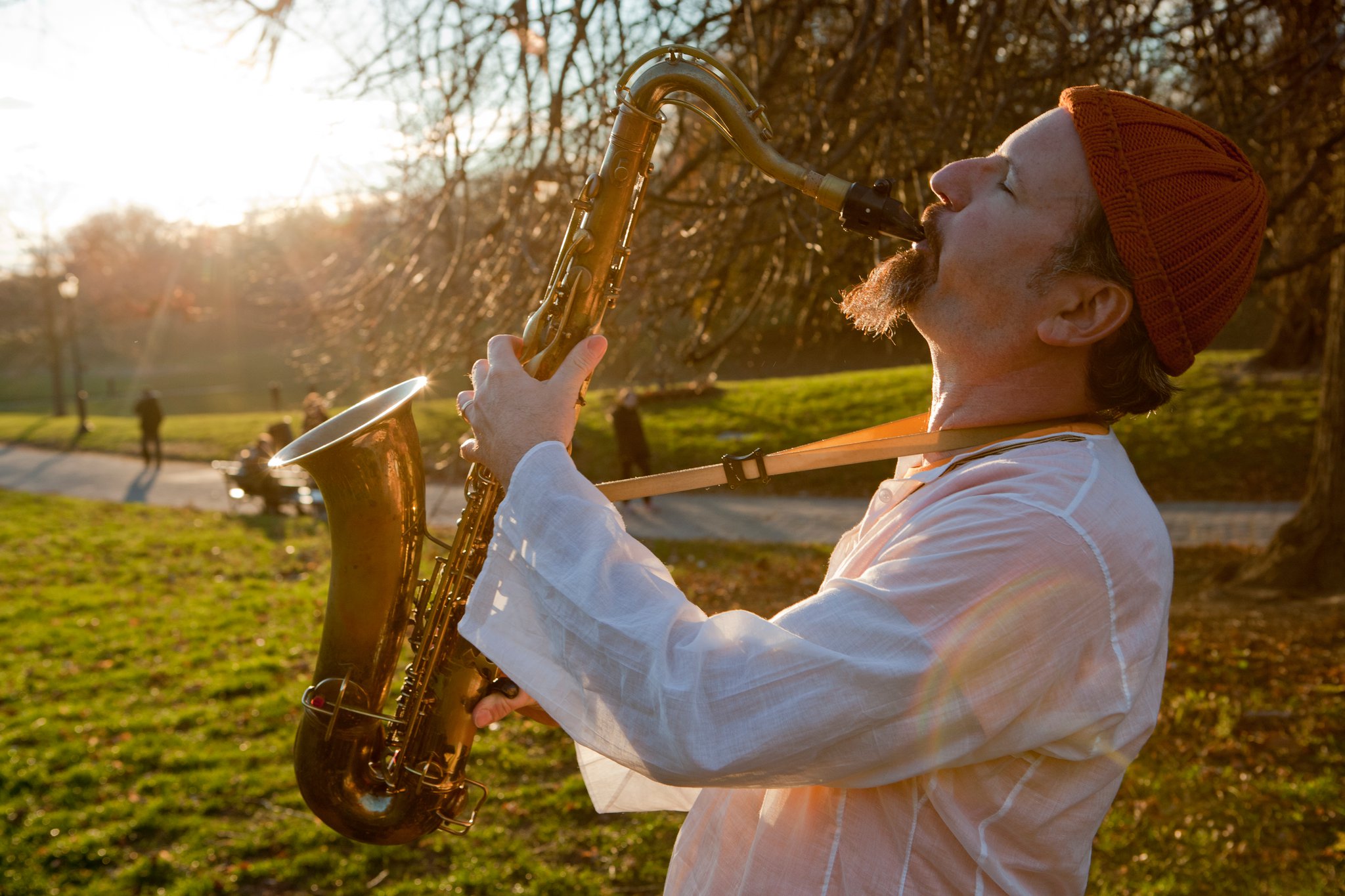 Jeff Lederer is one of the most recognizable saxophonists on the jazz scene today.  He continues to show up at the top of critics and readers polls. The drummer and saxophonist have played together for several years in various configurations and Cosgrove knew Lederer was the key to this project. “I began to be inspired by Lederer’s sound when I first checked out the Matt Wilson Quartet,” says Cosgrove. “He makes the music feel so comfortable with his huge sound and musical knowledge.” The saxophonist lent his ears to the early ideas of the project, as well as  the mixing process. Lederer is also the musical director for the Visionary Youth Orchestra, part of Arts for Art, a non-profit co-founded by William Parker. 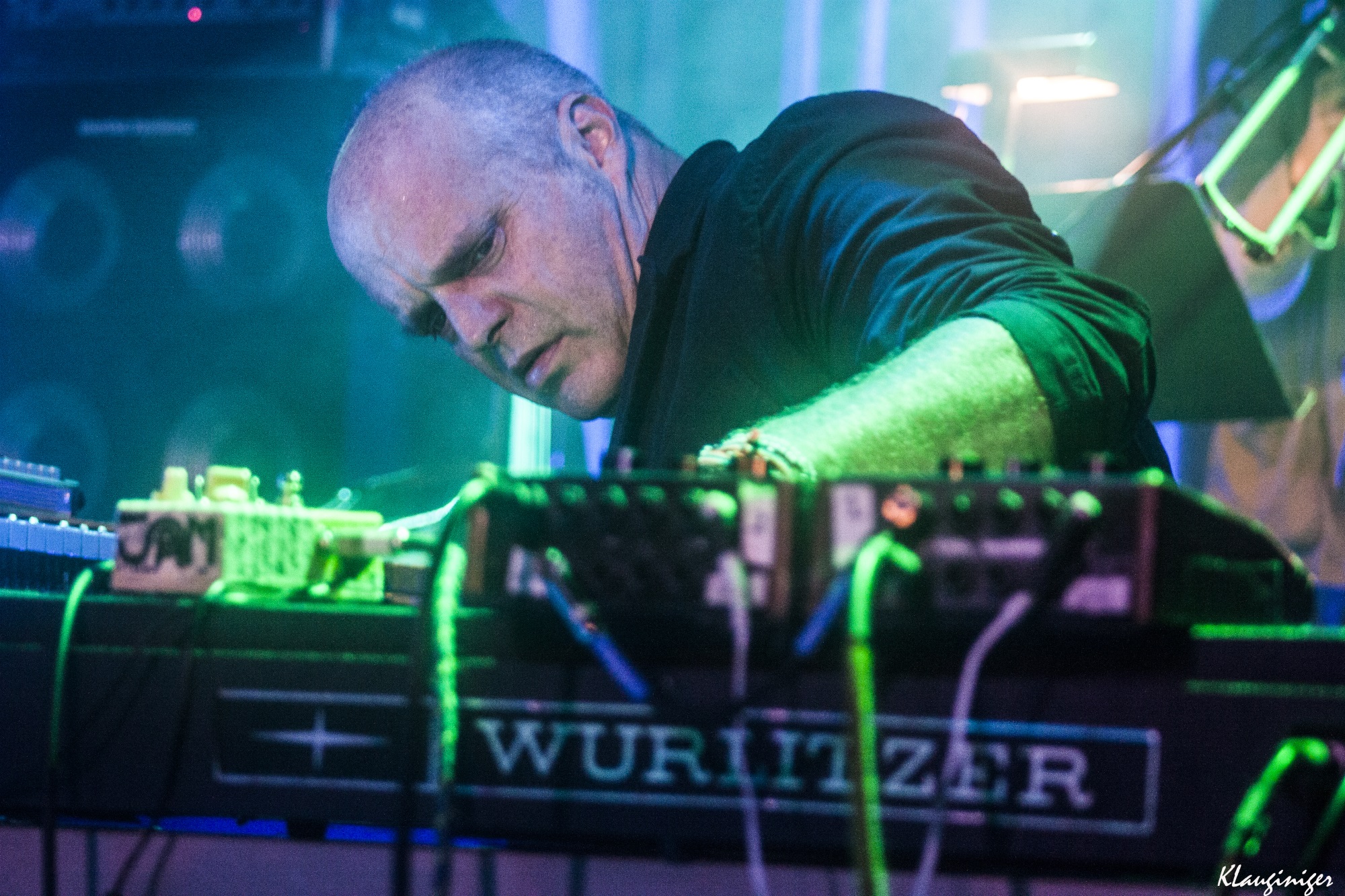 Organist John Medeski showcases his musical versatility and stunning sound on this album, confirming his musicianship is beyond classification. He embraces the classic organ trio while pushing convention. Lederer and Medeski have a history through drummer Matt Wilson. “Medeski, Martin & Wood were another band that appeared on my radar in college and really shook up my idea of what was musically possible,” says Cosgrove. “I knew I wanted John for this project from the beginning but had no idea what a huge impact his playing would have on the music.” The drummer and organist had never met in person prior to arriving at Applehead Studios in upstate New York. Medeski was unstoppable from the very first note.

The international jazz community continues to pick up on Jeff Cosgrove’s inviting sound and unexpected musical combinations.  He carves a unique path in jazz and creative music by choosing rural surroundings – primarily in West Virginia and now in Middletown, Maryland. The open space  lends itself to a not-so-subtle connection to the drummer’s distinctive sound, one that is uncluttered, leaving melodic lines the freedom to develop under Cosgrove’s loose direction on the music.

Cosgrove creates  opportunities to play with innovative musicians while never having been a part of a major city jazz scene, and leads a variety of ensembles to push his levels of creativity.  Cosgrove’s working groups include an improvisational based trio featuring pianist Matthew Shipp and alto saxophonist Rob Brown, a trio focused on his compositional efforts with saxophonist Noah Preminger and bassist Kim Cass, and his longstanding projects featuring multi-instrumentalist Scott Robinson and bassist Ken Filiano, and saxophonist Jeff Lederer and bassist Mark Lysher. Cosgrove does not show any signs of slowing down. History Gets Ahead of the Story marks another chapter in his musical development, showcasing bold ideas and the drummer’s unique sound