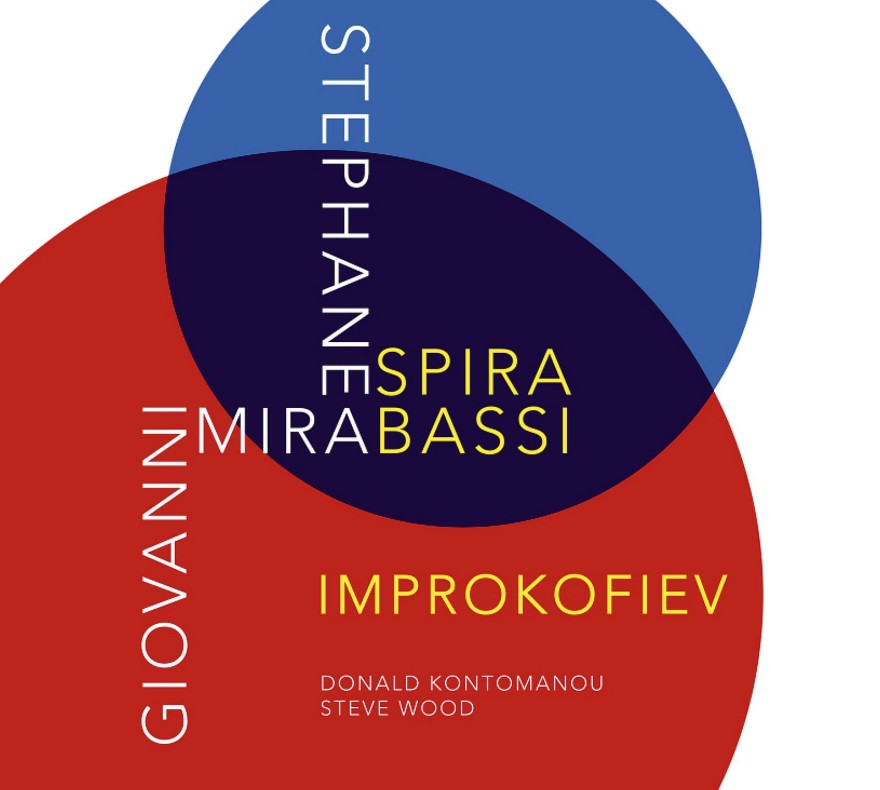 Improkofiev is the pair’s first collaboration in a decade, featuring a new quartet with bassist Steve Wood and drummer Donald Kontomanou

“[Spira] brings a self-contained assurance to each composition… He can be soulful but an articulate story from his chosen instrument is paramount in all he does, delivered with total clarity.” – Peter Gamble, Jazz Journal

With the release of his last album, New Playground, soprano saxophonist Stéphane Spira celebrated a period of new beginnings: a flourishing second career in jazz in his adopted home of New York City, and a new family with the birth of his son. Spira’s new release, Improkofiev, finds the saxophonist embarking on another new chapter, this time more of a homecoming. He’s recently moved back to his native France after a decade abroad; and the newly formed quartet Spirabassi reunites him with Italian-born pianist Giovanni Mirabassi, with whom he first recorded in 2009, just before embarking for the States.

Not that Improkofiev, due out June 19, 2020 via Jazzmax, is aiming to recapture the past. Spira has long reveled in reinvention, both in his life and his music. His growing discography is evidence enough of that; he abandoned a thriving career as an engineer overseeing projects from Paris to Saudi Arabia to pursue his passion for jazz. His return to France finds him not in his home city of Paris but in a bucolic setting near the ocean in Brittany, offering a quality of life for his family difficult to find in Manhattan. And his reunion with Mirabassi builds on the duo chemistry they forged on their initial outing, Spirabassi, to form a stellar new quartet with bassist Steve Wood and drummer Donald Kontomanou.

“Giovanni Mirabassi is an outstanding piano player,” Spira raves. “As soon as I came back to France last summer, Giovanni and I knew that we wanted to get back together. We’ve both evolved over the last ten years, so it’s been really interesting to explore this relationship.”

The title of the new album shows off not only Spira’s love of wordplay, but also his inventive approach to classic repertoire. The three-piece suite that comprises half of the album is based on clever re-imaginings of Sergei Prokofiev’s Violin Concerto No. 1, though the source material is so transformed, embellished or reinterpreted through the three movements that it can be something of a mind game just to trace the pieces back to their classical origins.

Spira was introduced to the Prokofiev piece nearly 15 years ago by a Turkish jazz presenter and radio host, who heard echoes of the Russian composer’s dense harmonies in Spira’s 2006 debut, First Page. “He really opened my ears,” Spira says. “As soon as I heard the Violin Concerto I was struck by the melody, the lyricism and the complex harmonies, which is a combination that I’m particularly drawn to. I love a melody that you can sing but that’s supported by harmony that isn’t obvious but sounds totally natural. I immediately heard it as a vehicle for a jazz band.”

While he didn’t arrange the “Improkofiev Suite” with the Spirabassi Quartet in mind, the band’s formation proved an ideal fit for the music. Originally from Perugia but based in Paris since the early 90s, Giovanni Mirabassi weaves an elegant thread of European classical music into his jazz playing, which is heavily influenced by the impressionistic melodicism of jazz greats like Enrico Pieranunzi and Bill Evans. Spira found him to be the perfect duo partner in 2009, when he was dealing with the death of his father.

“The Spirabassi album was a way for me to process my grief through music,” the saxophonist recalls. “Giovanni is so lyrical that it felt right to go through that experience with him.”

Though they wouldn’t record together again for the next decade, as Spira found his footing in a new country and dedicated himself wholly to his voice on the soprano, they had forged a truly special and singular relationship while creating Spirabassi. The pairing is so distinctive that Spira didn’t hesitate to reprise the hybridized name for his new quartet, acknowledging the centrality of Mirabassi’s contributions to the collective sound. The pairing echoes classic examples like the Dave Brubeck Quartet, with Paul Desmond’s identity so closely linked to the group sound despite the name on the marquee.

That’s not to downplay the importance of the rest of the quartet. Steve Wood became an intimate collaborator and friend to Spira during the saxophonist’s tenure in New York City, bringing a foundational spine to the music that has become one of the keys to Spira’s sound. Donald Kontomanou is a more recent addition, bringing a second-generation instinct as the son of French jazz singer Elisabeth Kontomanou.

The album is rounded out by a selection of pieces that tastefully complement the “Improkofiev Suite.” The album opens with the first of two Spira originals. The flitting melody of “Ocean Dance” offers a vibrant depiction of the composer’s new setting, the feel of the dance provided by Kontomanou’s fleet brushwork and Wood’s nimble bass, over which Spira and Mirabassi waltz gracefully. A timpani-like fanfare on mallets opens “After Rain,” on which the group’s spirited and comradely performance summons the sunshine from behind the clouds of the Prokofiev-inspired harmonies. Carla Bley’s “Lawns” is invested with sweeping, heartfelt emotion, while Erik Satie’s “Gymnopedie No. 1” is rendered with an optimistic verve that proves a perfect bridge to the suite, which closes the album.

Drawing on the lessons and inspirations of the past to create something entirely new and deeply personal is an approach that has been central to jazz throughout its history. While Spira may have come late to the life of a jazz musician he’s invested himself with that attitude in profound ways. Improkofiev, playful and rich, inventive and soulful, is an exquisite example. 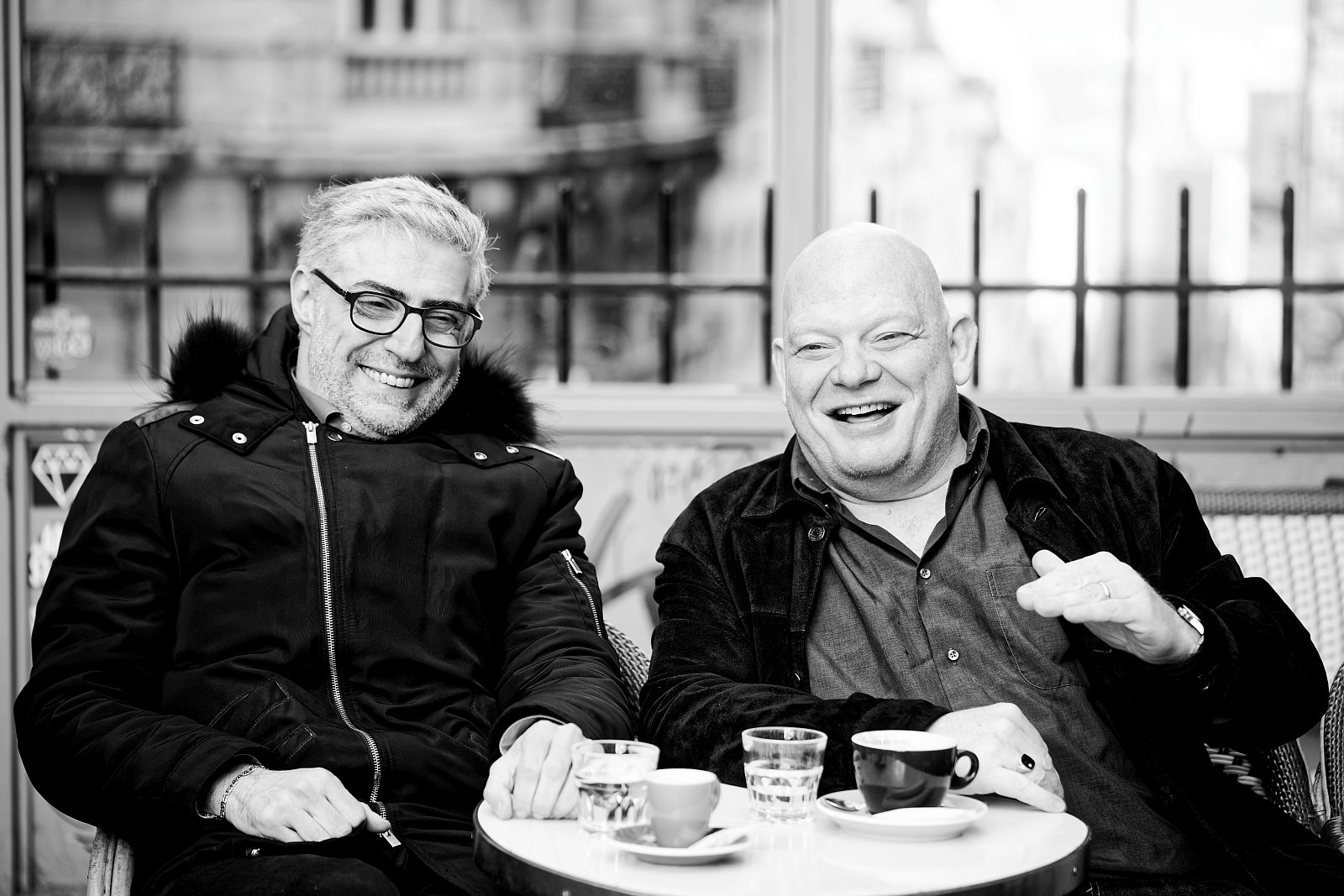 French saxophonist Stéphane Spira grew up with jazz the old-school way: in late-night jams and cutting sessions. A protégé of longtime Chet Baker pianist Michel Graillier, Spira’s jazz career has taken him from 4 a.m. basement sessions in the underbelly of Paris, through acclaimed collaborations with trumpeter Stéphane Belmondo and pianist Giovanni Mirabassi, to the cutting edge of New York jazz. Trained as an engineer, Stéphane sharpened his chops off the books, after hours, immersing himself in a hard-edged milieu. Perhaps since he honed his chops in the depths of the jazz underground, Spira was spared the awkwardness of growing up in public: Spira’s “remarkable maturity” (Radio France) has not gone unnoticed by the critics. Prior to Improkofiev, Spira released five critically acclaimed albums as a bandleader: First Page; Spirabassi (a duo collaboration with Mirabassi); Round About Jobim, a tribute to the father of bossa nova featuring Lionel Belmondo’s acclaimed Hymne au Soleil ensemble; 2014’s In Between and 2018’s New Playground.