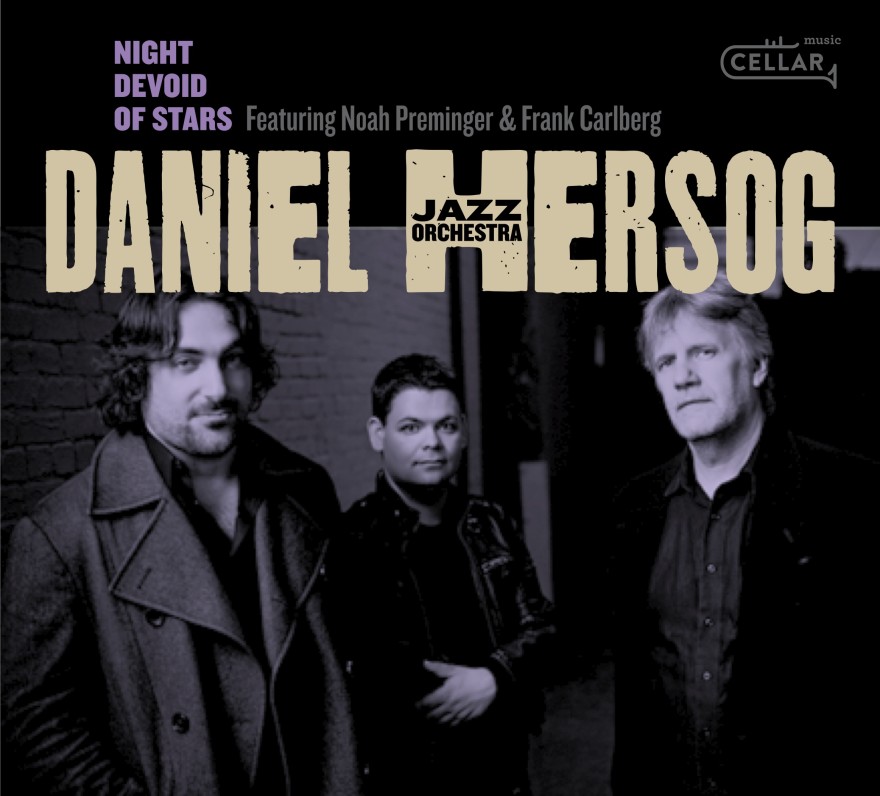 “Daniel Hersog has assembled a top-notch band from the cream of the Vancouver jazz community and taken them over the top with such high-powered soloists as Noah Preminger and Frank Carlberg. Daniel’s compositions and the stellar arrangements absolutely glow.” — Nou Dadoun, CFRO-FM, Vancouver

Night Devoid of Stars – due from the Cellar Music label on June 12, 2020 – showcases the 16-piece, Vancouver-based Daniel Hersog Jazz Orchestra in the leader’s richly melodic originals, plus an inventive, deep-blue arrangement of “Smoke Gets in Your Eyes”

Vancouver-based jazz composer Daniel Hersog wrote much of the music for Night Devoid of Stars, his debut big-band album, early in the morning before teaching, with news on the TV in the background. So, the darker strain of events these days – extreme political polarization, escalating climate disaster, endless gun violence, etc. – inevitably seeped into his consciousness and onto the page, even though he has a naturally positive cast of mind. Ultimately, the music he composed ended up reflecting both shadow and light. Hersog took the title for his album from a Martin Luther King quote: “Returning violence for violence multiplies violence, adding deeper darkness to a night already devoid of stars. Darkness cannot drive out darkness; only light can do that. Hate cannot drive out hate; only love can do that.”

Reflecting on the sound and sensibility of Night Devoid of Stars, Hersog says: “ There were a lot of inspirations for my big-band pieces, but in particular, this album reflected my love for Gil Evans and his writing for featured soloists in a large-ensemble setting, especially for Miles Davis in ballads like ‘My Ship.’ Then, of course, most inspiring was just how well I know and love the playing of Noah and Frank – their sounds were always in my mind. Noah is such a virtuoso on the tenor that I knew that he could play anything that I dreamt up. He’s an especially great player in a ballad style, with a beautiful tone. Noah has also always been such a confidence booster for me, going back to our days at NEC – he always believed in my composing. Frank was an important teacher for me there, getting me to develop my thinking about music as much horizontally, or harmonically, as vertically, or melodically. Writing for Frank means that you’re composing for a consummate improviser. I knew that he would take my music someplace more beautiful than I could even imagine.”

About Hersog, Preminger says: “Being a trumpeter and improviser himself, Dan really understands the perspective of a player when improvising within a piece of music. He encourages your own individual phrasing when playing solo melodies through his pieces, resulting in a sense of freedom within the music. The passages specifically designated as ‘blowing sections’ can go anywhere harmonically and rhythmically. This shows the trust that Dan has in his musicians, which helps make performing his music feel adventurous – and a lot of fun.” For his part, Carlberg adds: “Part of the essence of jazz is connecting to some commonality in our humanity while at the same time expressing a personal viewpoint. Daniel’s music has an organic connection to the history of this music while staking out a distinct identity. He has filtered his influences through his own experiences and then synthesized them into an individual expression. His choices in composing, orchestrating and then putting together a group of diverse yet compatible musicians to play his music are all very much his own.”

Hersog doesn’t play trumpet on the album, concentrating instead on conducting the ensemble. Also, as he points out in the album’s liner notes, the composer really wanted to spotlight another trumpeter he admires, Brad Turner, now a fellow teacher at Capilano University in North Vancouver: “Brad has been a light on the hill in my musical life since I was a teenager. Featuring his improvisational voice on this record is the realization of a long-held goal.” Along with a dozen-plus compatriots from the Vancouver scene, the band included a player new to Hersog: drummer Michael Sarin, a versatile talent from New York. The composer says: “The freedom with which Michael interpreted the drum parts that I wrote surprised me, really elevating the music.”

Night Devoid of Stars ranges from such highlights as the anthemic, melody-rich opener “Cloud Break” – including a  solo by Turner – to the dark-hued ballad “Makeshift Memorial,” with its expansive, scene-setting introduction by Carlberg and characteristically affecting solo by Preminger. The saxophonist’s turn in the rhythmically accented “Indelible” shows another side to his playing, his tenor solo brimming with keening expressiveness. “Song for Henrique” can have an alluringly slinky Middle Eastern feel, while Hersog’s dramatic, even epic arrangement of Jerome Kern’s standard “Smoke Gets in Your Eyes” includes an off-kilter Carlberg solo evoking Thelonious Monk and his affection for the tune. “ There’s an emphasis on warm ensemble sounds in the arrangements, and there are classic-sounding big-band moments on the album – I love the way you can mix instruments in a big band to make sounds that no single instrument could ever create,” Hersog explains. “But, largely, these are pieces written for improvisers, for the way their expressive playing can take the compositions further, musically and emotionally.”

Born in 1985 and raised in Vancouver and Victoria, Hersog has become a vital voice as a trumpeter, composer and arranger. He has toured North America leading large ensembles with such notable musicians as Terry Clarke, Kevin Turcotte, Remy Le Boeuff, Billy Buss, Stuart Mack, Jason Palmer and Kim Cass, as well as Brad Turner, Noah Preminger and Frank Carlberg. Hersog is often featured at the Vancouver International Jazz Festival, in addition to performing regularly in his hometown at Frankie’s Jazz Club and Pat’s Pub. As a sideman, he performs with the Vancouver Legacy Jazz Orchestra, Jaelem Bhate Jazz Orchestra, Super Trumpets and Sonny’s Cousin. A 2016 graduate of New England Conservatory, Hersog won the school’s prestigious Gunther Schuller Medal. He studied with a who’s who of jazz at NEC. Composition teachers included Carlberg, John Hollenbeck, Dave Holland, Ken Schaphorst and Rakalam Bob Moses; he studied trumpet with masters John McNeil, Ralph Alessi and Steve Emery. An instructor himself now, Hersog teaches jazz trumpet at Capilano University, where he also writes for the school’s big band and leads a trumpet ensemble.