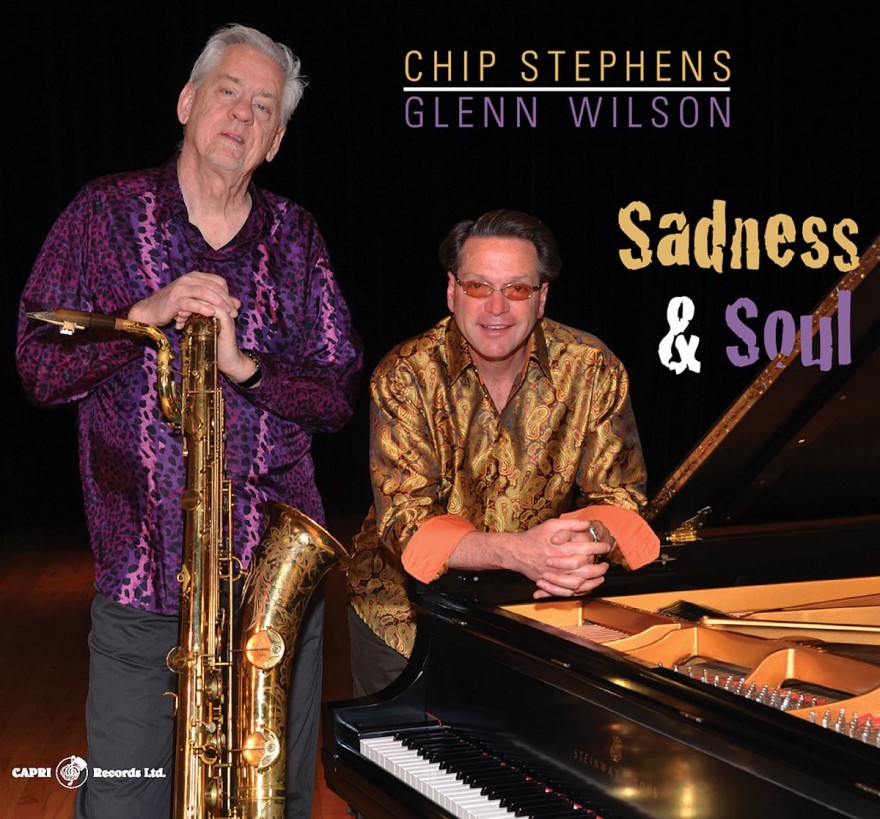 “Chip Stephens is an impeccable technician, a clever, even daring composer, and a restless explorer of melody.” – Carlo Wolff, All About Jazz

“Sadness and Soul is warm, balanced, fluid music made from smartly chosen jazz standards and two originals played with feeling — for expressivity, yes, and for fun. May we please have more.” – Howard Mandel, writer, editor, President Jazz Journalists Association

With their Capri release Sadness and Soul Chip Stephens and Glenn Wilson present a stunning recording of piano/baritone saxophone duets featuring some jazz standards and two original compositions re-harmonised and performed with the freedom of expression that can only come from two jazz masters immersed deeply in their craft.

Stephens and Wilson have played together for over 18 years and the duo is two years old.  With advanced and interesting re-harmonisation and without the bass and drums to hold down the rhythm, they take off on flights of rhythmic, harmonic and melodic fancy at a moment’s notice. As Wilson comments, “We never play anything the same way once.”

Others agree.  Musician, producer, jazz historian, and educator Bill Kirchner says: “hearing two world-class players shine in this duo setting is an utter joy.  Most of all, check out their versions of Monk’s ‘Round Midnight’ and Coltrane’s ‘Countdown’ – both instant classics.”

Larry Kart, author of Jazz in Search of Itself, agrees. “The degree of musical interpenetration that the Stephens-Wilson duo arrive at is almost without precedent…it’s difficult to sort out whether a figure Stephens has just played has been inspired by something Wilson has just played or vice versa…  their re-shaping of two familiar Coltrane pieces are quite novel (‘Giant Steps’ is lilting and lyrical, while ‘Countdown’ virtually becomes a ballad), and their solemn, almost ten-minute journey through ‘ ‘Round Midnight’  is masterly – as, indeed, the entire album is.”

On the opening track, John Coltrane’s Giant Steps, Stephens and Wilson improvise together on the difficult changes taken at a medium tempo.  Often Giant Steps is taken at breakneck speed, leading improvisers to fall back on patterns and licks.  Wilson and Stephens explore the harmonic sophistication of Giant Steps with melodic flare and it’s often difficult to tell who is accompanying whom. Coltrane’s Countdown, also usually given the breakneck treatment, is handled here with a gentle Latin feel (with re-harmonisation, of course).

The title track, Sadness and Soul, a Stephens original, is a beautiful bossa with such a strong melody that lyrics seem inevitable.  The other original, Wilson’s Adams Park, named after Park “Pepper” Adams, the great baritonist and Wilson’s friend and mentor, employs some of Pepper’s pet phrases into a melody that is stated with calm beauty and is reminiscent of Billy Strayhorn.

Round Midnight is another re-harmonisation which Chip performs on prepared piano and, with limited improvisation, is a melodic and harmonic tour-de-force.  In a Mellow Tone and Spring is Here are both re-harmonised, with melodic changes to match the harmonies and are fresh takes on those much-loved songs. Richard Rodgers’ My Romance is performed in two keys in a novel arrangement that swings hard without a bass and drummer. The album closes with a unique arrangement of Gershwin’s Our Love is Here To Stay in which the form and harmony are altered but the melody never disappears.

Sadness and Soul is a unique collaboration between two jazz masters who are not afraid to let the music and melody speak for itself. Jazz aficionados will appreciate the sophisticated harmonic arrangements of these songs, but non-jazz’ers can just revel in the beauty of the low horn’s unexpectedly broad range and rich timbres, turned to song by a lyrical yet tough melody-maker, and the piano’s grand as well as close-up possibilities, brought to life by an inventive improviser with a deft touch.

Glenn Wilson has been a professional jazz saxophonist for nearly 50 years. After completing his undergraduate degree from Youngstown State University in 1977, Wilson moved to New York City, where he worked and recorded with The Buddy Rich Band, Lionel Hampton Orchestra, Toshiko Akiyoshi Jazz Orchestra, Tito Puente, Machito, Bill Kirchner Nonet, Bob Belden Ensemble, and scores of other jazz and Latin-jazz groups. Glenn recorded his first CD as a leader, the highly-reviewed Impasse, in 1984 for Cadence Records. In 1988, Glenn began his association with Sunnyside Records with the release of Elusive. Three more CDs with Sunnyside – Bittersweet, Blue Porpoise Avenue, and One Man’s Blues – as well as a recording for Timeless Records, Lee’s Keys Please, followed in the next decade. Glenn’s CDs are featured in the Penguin Guide of Jazz and The Grammophone Guide to Good Jazz and he earned a place in the Baritone Saxophone category of the DownBeat Magazine Jazz Critics Poll. Wilson was awarded a gold record for his playing and arrangements on Bruce Hornsby’s 1993 recording Harbor Lights.  The Devil’s Hopyard, featuring his group TromBari with trombonist Jim Pugh, was released in May 2012 and Timely, a live quintet recording released in 2015, made many critics’ “Best of 2015” lists. Wilson leads an active touring schedule performing in clinics, concerts and clubs.