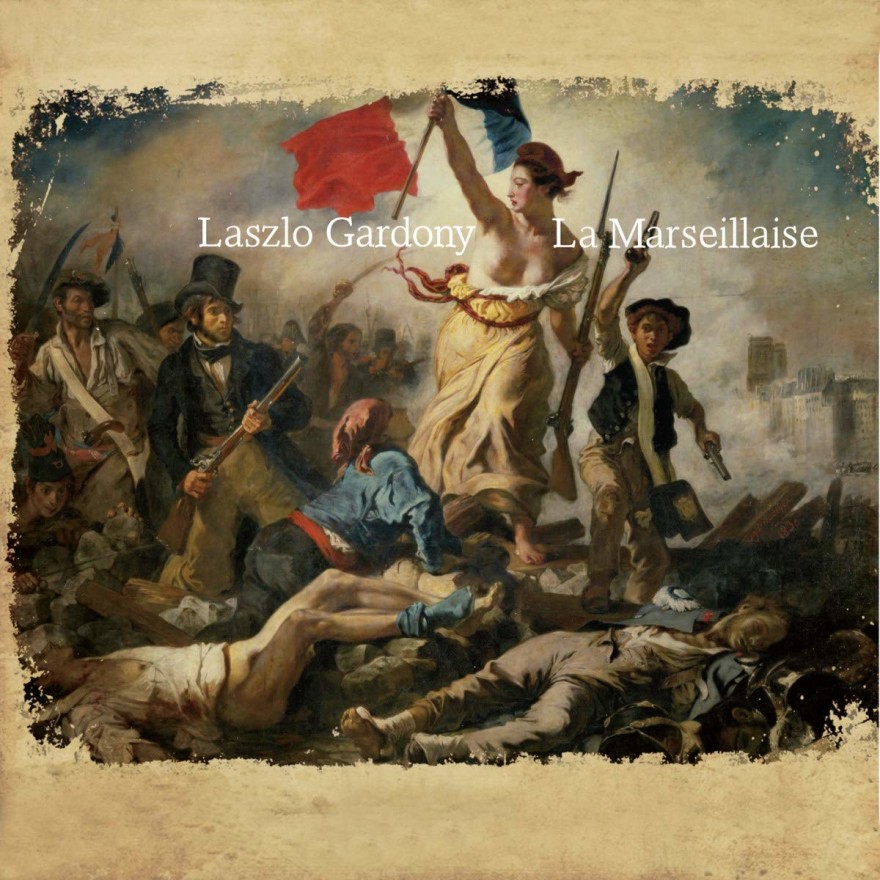 Hungarian-born pianist Laszlo Gardony loves to perform his versions of jazz standards–and loves even more to compose new and original music—but he is most attuned to the production of creative work entirely in the moment. Everything else he plays is with an eye toward creating a context for devising and executing music on the spot. That was Gardony’s scheme when he took the stage in March as part of Berklee College of Music’s Keys Fest, and his output, as documented on La Marseillaise set.

“When you are performing, what you are bringing into focus is the moment,” says Gardony of his concept for playing piano before an audience. “What you play has to sound alive, and that requires a careful reading of the moment. That’s what makes jazz stand apart from any other genre: There’s a real mastery of the intuitive moment.”

La Marseillaise is Gardony’s third solo piano album in seven years. That recent productivity is all the more remarkable considering that in the three decades of his career prior to that, he had recorded without accompaniment only once, on his highly regarded 1993 Sunnyside debut Changing Standards. Why the shift in emphasis? “I don’t know,” Gardony admits. “But I like the possibilities of energy, orchestration, and vibe when playing in solo, and obviously it’s a very personal statement. I’m doing what feels natural to me at the time, and that joyful focus creates the music.”

It no doubt helped that the Keys Fest at Berklee, where Gardony has taught jazz piano since 1987, is an annual celebration of his instrument as a standalone. He participates every year—and the freedom offered by solo performance allows him to approach the concerts differently than he would in a trio or larger ensemble setting. Gardony arrived at Berklee’s David Friend Recital Hall with a loose set of songs he might play, but—save for the opening “La Marseillaise”—nothing set in stone.

“Being an improviser, when you plan a concert you pay a lot of attention to the possibilities: a repertory that is in play for the performance,” Gardony says. “It’s not like you put a setlist together and say ‘I’m going to stick to this no matter where the improvisation takes me.’ As you play each piece it leads you to the decision of what should be next. That keeps the performance inspired as the music flows in the moment, but it also assures that you create a story—not just within the five minutes or so of a tune, but also a longer story arc for the whole performance.”

The story of La Marseillaise, then, is one of joy. Gardony was in an upbeat mood on the day of the concert; felt inspiration coursing through him as he played; and, as the performance progressed, the connection with the audience felt increasingly strong, generating a sense of uplift that inevitably infected the music. It was the joy not just of creation, but of communication.

Gardony’s selections, in and of themselves, were not necessarily intended to be joyful. The dark overtones of the concert-and-album-opening “Revolution,” a complex variation on the French national anthem that titles the album, are immediately apparent. “It’s a very serious piece of music, about standing up to tyranny and against various abuses of human rights,” the pianist says, confirming the piece’s political message. “There are lots of people in history who became complacent about guarding their freedom, and sure enough they lost it. I think it’s worth remembering and reminding ourselves at all times.”

On its surface, the 19th-century Neapolitan love song “O Sole Mio” couldn’t be a more profound change of subject. But its life-affirming sense of romantic love that can fill one’s heart regardless of external circumstances extends organically from the expressions of patriotism and brotherhood in “Revolution.” The pianist is clearly enjoying himself, too.

The title of “Four Notes Given,” the album’s first wholly improvised piece, is literal. Gardony asked the audience to suggest four notes. From the raw material of those notes (which open the piece in the form of a flourish) he wove a spellbinding minor-key tapestry, full of tension and momentum but also great warmth and passion. That such beauty and sophistication developed from a series of four randomly chosen notes is a demonstration of the artist’s ingenuity and resourcefulness.

Erroll Garner’s “Misty” came as a surprise even to Gardony: it hadn’t been on the roster of songs he thought he might perform that day. That said, he loves the tune and has played it in concert for years. “After the full-length improvisation of ‘Four Notes Given,’ I thought this lovely old standard with a modern approach would be a nice next step and was just needed there,” he says. “That’s something you can’t entirely plan for: What makes perfect sense in the moment.”

“Quiet Now,” Denny Zeitlin’s haunting early composition, gets a rather dense treatment from Gardony that belies the title sentiments. The vigor of its performance, however, is imbued with tremendous emotion (moving the pianist to sing gently along at one point). The sense of communion between artist and audience is palpable, and it reaches out to include the recording’s listener as well.

Like “Four Notes Given,” Gardony’s other improvisation, “On the Spot,” begins with a short flourish of a phrase. This one, though, is not an audience suggestion: It’s the pianist’s brainchild, and it builds to an elaborate, bravura performance with the surging intensity of a Beethoven sonata…only more so. “This is the kind of energy that you only get from music that is not premeditated,” Gardony says.

Gardony first wrote “Mockingbird” when he was 22 years old. Back then it was more of a funky fusion tune; it matured along with its author, with its current incarnation being a meditative one, both gentle and firm, confident but not strutting or swaggering. “I hear it now,” he says, “as being about this kind of indescribable vibe that can come when you are cultivating mindfulness.”

Just as its title suggests, “Bourbon Street Boogie” is full of New Orleans flavor. It’s a tribute to Professor Longhair, James Booker, and the other rhythm-and-blues pianists from the Big Easy whom Gardony loves. “I’ve played and recorded it with my bands, but I love playing it in solo because it is very joyful for me to be a one-man band for this tune,” he says. It’s not a blues, per se, but it’s so full of blues feeling that it practically drips out of the speakers.

Laszlo Gardony was born in Hungary in 1956, and has no memory of a time when he didn’t play the piano. Nor was it ever simply something for a little boy to bang on. “I always improvised and made music,” Gardony says. “One of my first songs was written for my grandmother when I was about six. Throughout school, I would improvise for up to three hours a day.”

At seven, he began training classically, but by then his improvisational relationship to the piano was entrenched. When he began attending the Bela Bartok Conservatory in Budapest, he chose a major that would allow him to study African music and jazz as well as classical (though with separate auditions for each). He then earned a master’s degree in education from Eötvös Loránd University and began establishing his career as a jazz musician; however, with such a career being difficult to sustain in Europe at that time, he cast his eye on the United States, winning a full scholarship to Boston’s Berklee College of Music in 1983.

Upon his graduation in 1987, Gardony accepted an offer from Berklee to join the faculty. A year later, he inaugurated his American recording career with The Secret, featuring bassist Miroslav Vitous and drummer Ian Froman. It was 1989 that proved Gardony’s breakthrough year, however, with both a victory in the Great American Jazz Piano Competition and a critically acclaimed album, The Legend of Tsumi, with Dave Holland and Bob Moses. He then worked regularly through the 1990s as both a leader and sideman, while continuing to teach at Berklee (where he became a full professor in 1997).

In 2001, Gardony formed a trio with bassist John Lockwood and drummer Yoron Israel, which has been his first-call musical outlet ever since. “It’s very telepathic the way we work together,” he says. “They immediately pick up on the feel of the music. I don’t have to explain the vibe much at all. We have had great, great concerts together, and we definitely want to keep it going.”

Nevertheless, Gardony also appreciates experimenting with the solo piano’s possibilities. In 2012 he released Clarity, an entirely improvised album that gained much praise. He followed it with 2017’s Serious Play, this time a solo piano collection of standards as well as fully improvised pieces.

La Marseillaise offers the best of three worlds: composed original tunes, in-the-moment improvisations and creative covers of standards. “As you master the art of improvisation, you can trust your immediate judgment: What needs to come next? And is it going to be in the context of an original, a standard or an improvised piece?” Gardony says. “I love that freedom, and joyful responsibility solo piano brings.”