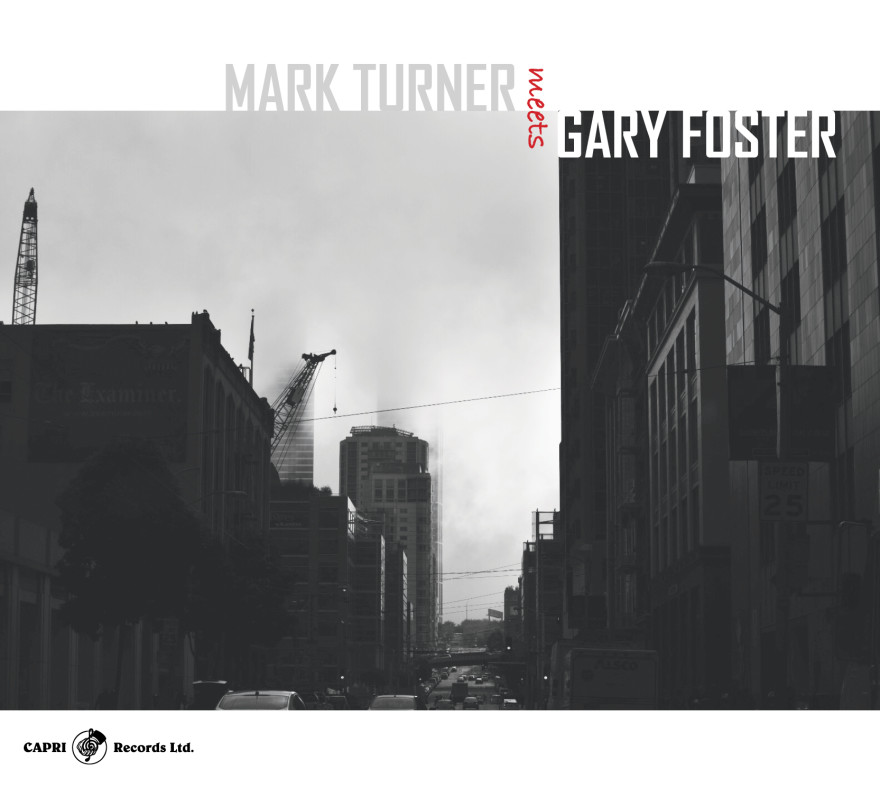 An intergenerational union calling on the legacy of Konitz, Marsh and Tristano

“The saxophonist Mark Turner, has been one of the most productive and vital artists of the last dozen years”

” They should name a river after Gary Foster. The alto saxophonist has a natural, flowing style that’s as wide and compelling as the Mississippi itself.” – Bill Kohlhaase, Los Angeles Times

Although nearly forty years separate the ages of the veteran alto saxophonist Gary Foster and the influential tenor saxophonist Mark Turner, both of these celebrated stylists hold the music of Lee Konitz, Warne Marsh and Lennie Tristano in high reverence. With the live double-CD set Mark Turner Meets Gary Foster, these two master players have a chance to find common ground over their shared musical influences. Supported by the expert rhythm of Putter Smith on bass and Joe LaBarbera on drums, Turner and Foster delve into core pieces from the repertoire of their heroes, including Marsh’s “Background Music,” Konitz’s “Subconcious-Lee” and Tristano’s “Lennie’s Pennies,” and “317 East 32nd Street” (which the legendary pianist composed with guitarist Billy Bauer.) In addition, the two saxophonists lace the standards “Come Rain or Come Shine” and “What’s New,” along with “‘Teef” by the hard bop altoist Sonny Red, into the mix.

If this in-performance recording reminds jazz aficionados of such well-regarded albums as Warne Marsh’s Ne Plus Ultra, the resemblance is intentional. Foster and Marsh were longtime collaborators, while Turner has gone on the record with his affection for the tenor genius, a regard that can be readily detected in Turner’s own prominent playing. Throughout Mark Turner Meets Gary Foster the two saxophonists bob and weave around each other much as Marsh and Lee Konitz did on their recordings with Tristano and on their own recorded encounters. (As Foster himself has done with both Marsh and Konitz, and Turner with Konitz.) Employing neither piano nor guitar, Turner and Foster are free to construct complex yet affecting melodic lines unhampered by undue harmonic restrictions.

Their spirited improvisations, and the extraordinary unity of their blended theme statements, demonstrate that both men-Foster, some six decades into a lauded career, and Turner, an innovative presence since the nineties-remain at the top of their games. Foster has retained the lithe yet aggressive sound and melodic resourcefulness that is uniquely his, while Turner displays his uncommon mixture of modernist invention and ingenuity. (Of special note is the inventive extended cadenza that Turner employs as an introduction to “Come Rain or Come Shine.”) Again, the disparity in age between these two brilliant improvisers matters little; a blindfold test listening to this recording might lead one to hear a pair of polished and sophisticated players of the same generation.

A respected flutist and clarinet player as well as a world class alto saxophonist, Gary Foster, in addition to his acclaimed jazz work, is a legendary fixture of the West Coast studio scene appearing on numerous Grammy, Emmy, and Oscar-winning soundtracks. A spotlighted member of the Toshiko Akiyoshi-Lew Tabackin Big Band, Foster also collaborated with Warne Marsh and Lee Konitz, Clare Fischer, Louis Bellson and Allen Broadbent, among many others.

Instantly grabbing attention from both critics and fellow musicians upon hitting the jazz scene in the nineteen-nineties, tenor saxophonist Mark Turner is recognized as a one of the most influential players of his generation. As well as recording as both a valued sideman and as an admired leader, Turner fronts his own band and is a member of other ensembles including the Billy Hart Quartet and the SFJAZZ Collective.