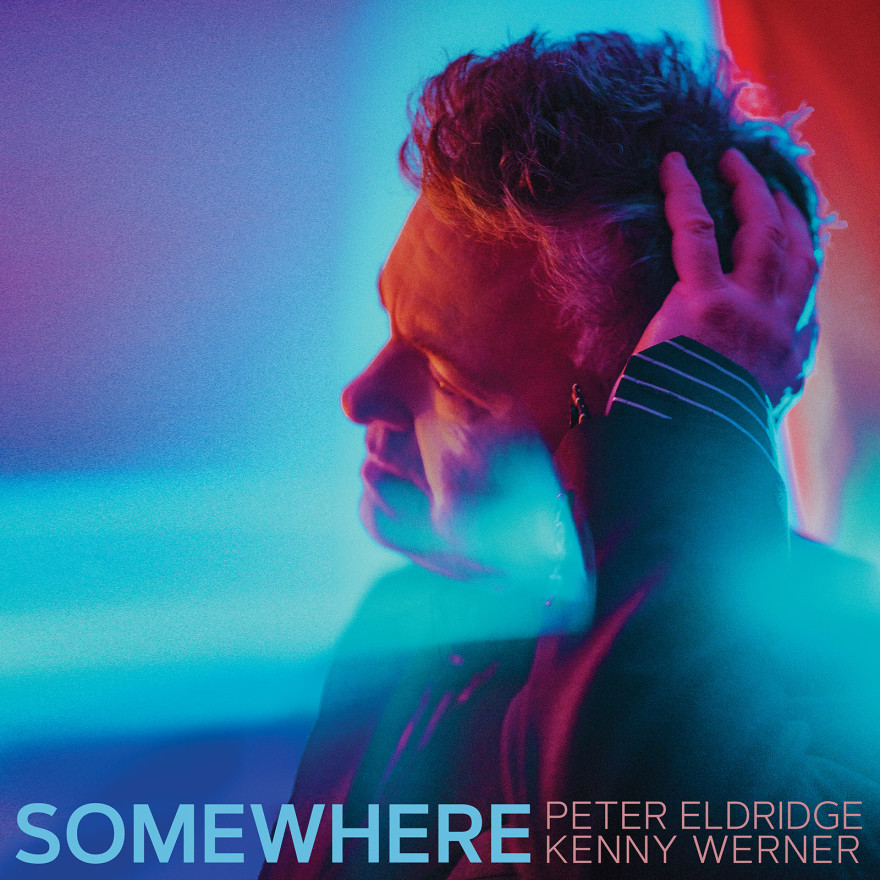 Due out: July the 5th, on Rosebud Records

“Kenny Werner has a rare combination of qualities, playing from deep in the mainstream, but doing so with the genuinely traditional values of group communication and emotional commitment to the creative act.” – Stuart Broomer, New York City Jazz Record

Somewhere takes its yearning title from the West Side Story classic penned by Leonard Bernstein and Stephen Sondheim; the song is here paired with the Johnny Mandel/Paul Francis Webster standard A Time For Love. Together, they suggest a place of togetherness and romance far removed from the tempestuous rancor of today, offering a dreamy escape from political discord and social media sniping.

Werner’s sumptuous string arrangements provide the perfect complement for Eldridge’s candlelit crooning, which reveals an exquisite new side to the singer’s already diverse artistry. Audiences are already familiar with his vibrant harmonizing as a founding member of the revered New York Voices and the adventurous vocal quintet MOSS. The urbane wit of his own songs can be heard on several albums that smartly bridge the singer-songwriter and jazz realms; later in 2019 he’ll release My Museum, a collection of previously unrecorded tunes spanning more than 20 years. When not in the studio or on the road with these wide-ranging projects, he can be found in the classroom as a member of the voice faculty at Berklee College of Music in Boston.

Berklee furnished the connections that proved key to finally bringing Somewhere to fruition. Eldridge and Werner are colleagues at the renowned institution along with cellist Eugene Friesen, who conducts the gorgeous 20-piece string orchestra on Somewhere, its members largely culled from the gifted ranks of the Berklee World Strings. Drummer Yoron Israel, who joins in-demand bassist Matt Aronoff in the ensemble’s rhythm section, is a professor of percussion at the college, while longtime faculty member George Garzone brings his inimitable tenor sax voice to Werner’s angular ode to John Coltrane, “Ballad for Trane.”

The idea for Somewhere was born nearly a decade ago, when Werner invited Eldridge into the studio for a library music recording session. Eldridge arrived expecting a simple voice and piano set-up; upon entering the studio he was suddenly confronted by a 40-piece orchestra. “At that point,” Eldridge says, “you could either get overwhelmed and freak out, or you could just have the most fun you could possibly have singing in front of an orchestra. Why not do the second one?”

The collaboration worked so well that the two determined to explore an orchestral project on more personal terms. “On that session,” Werner recalls, “Peter reminded me of Johnny Hartman, which brought to mind the beautiful treatments that Johnny Hartman could do. But I knew Peter was capable of a lot of different things, so I thought it would be incredible to do a whole album with that kind of musical and emotional relationship: no-nonsense, beautiful, lush, romantic songs with strings.”

Eldridge agreed immediately, realizing what a bucket list opportunity the project would be. He instantly called to mind favorite singer-arranger partnerships, including Frank Sinatra and Nelson Riddle, or Nat “King” Cole and George Shearing – even, though it doesn’t include strings, Johnny Hartman and John Coltrane. “It’s one of those Top Five thrills of life, to get to stand in front of an orchestra and sing,” he says. “Kenny’s string writing is so strong and nuanced. We were going for an old school approach but slightly to the left. Instead of just doing a bunch of standards and having it sound like 1964, we wanted to mix it up with different feelings to the music, but under the umbrella of this big, rich, symphonic, warm collection of tunes.”

For Werner, the project offered a chance to indulge in his long-held love of opulent string writing, updated with his advanced approach to harmony. “I was influenced as a kid by Mantovani and Muzak strings coming out of the Magnavox stereo in the middle of the living room,” the pianist recalls. “That stuff was incredible; it was elevator music, but it was incredibly elegant and lush. I wanted to explore that style, but with a lot more interesting harmony than might have been exhibited at that time.”

The album begins at its most traditional, with an achingly beautiful version of the classic “You Don’t Know Me.” Eldridge wrings every ounce of heartrending emotion from the song, punctuated with Werner’s bittersweet interjections. The pianist opens his own “I’m So Glad You’re Mine” with a lovely solo statement that perfectly sets the intimate mood. Eldridge next reprises his stunning ode to life’s great mysteries, “That Which Can’t Be Explained,” which he originally recorded on 2000’s Fool No More.

With music by Werner and lyrics by Eldridge, “Autumn in 3” is the collaborators’ contribution to the seasonal songbook, vividly conjuring the flutter of falling leaves and the first chill in the air. “Minds of Their Own,” written by Eldridge with music by the great Brazilian composer Ivan Lins, was previously recorded by the iconic Nancy Wilson, while “Less Than Lovers” is the debut of an Eldridge original with lyrics by one of his mentors, poet and educator Douglas Worth, who also provided words for Werner’s “Ballad for Trane.”

Friesen’s swirling string arrangement gives an off-kilter dizziness to Eldridge’s “Difficult,” original recorded on Decorum (2005), just right for the song’s disorienting infatuation. Werner penned both lyrics and music for the melancholy “Untitled Lament,” which begins with Eldridge backed by just the deft jazz trio before the strings finally enter with their longing refrain. One of Eldridge’s songwriting students, Mitchell Proctor, co-wrote the tender “Day Is Done (Prayer for Diego).”

Most importantly, Eldridge stresses, Somewhere looks not to a place but to a state of mind, one that allows listeners to abandon themselves to an imaginary world of luxurious romanticism. “It’s a bit of a prayer that there will be peace one day soon, that things won’t remain as desperate as they are now,” Eldridge concludes. We’re living in an incredibly strange time, so this music is trying to offset that and help people feel a few moments of hope. We hope it offers a balm for the spirit.”

Peter Eldridge
For years Peter Eldridge has remained at the forefront of both the singer-songwriter and jazz realms as a vocalist, pianist, composer, and arranger. He is also a founding member of internationally acclaimed vocal group New York Voices, which continues to tour internationally and has performed in some of the world’s most preeminent venues and festivals, including Carnegie Hall, Avery Fisher Hall, and the Kennedy Center, and has been involved in two Grammy-award winning projects with Paquito D’Rivera and the Count Basie Orchestra. Some of Eldridge’s notable collaborations include Bobby McFerrin, Fred Hersch, Becca Stevens, Chanticleer, George Benson, Michael Brecker, David Byrne, Jonatha Brooke, Kurt Elling, the New West Guitar Trio, Jane Monheit, the Swingles, Anat Cohen, Betty Buckley, Janis Siegel, Paula Cole, Jon Hendricks, and Mark Murphy. Peter’s music is featured in Zach Galifianakis’ recorded stand-up performance Live at the Purple Onion, and his original songs or collaborations have been covered by artists such as Nancy Wilson, Paquito D’Rivera, and Jane Monheit.  He collaborated with playwright Cheryl Coons to co-write The Kiss, a musical about the life and loves of Gustav Klimt. In addition, Peter was head of the Manhattan School of Music’s jazz voice department for 18 years and is now part of the voice faculty at Berklee College of Music in Boston.

Kenny Werner
Kenny Werner has been a world-class pianist and composer for over 40 years. His prolific output of compositions, recordings and publications continue to impact audiences around the world. In 1996 he wrote his landmark book,Effortless Mastery, Liberating The Master Musician Within. Werner has since created videos, lectured world-wide and authored many articles on how musicians, artists or even business people can allow their “master creator” within to lift their performance to it’s highest level, showing us how to be spontaneous, fearless, joyful and disciplined in our work and in our life. Kenny was awarded the 2010 Guggenheim Fellowship Award for his seminal work, No Beginning No End, a musical journey exploring tragedy and loss, death and transition, and the path from one lifetime to the next.