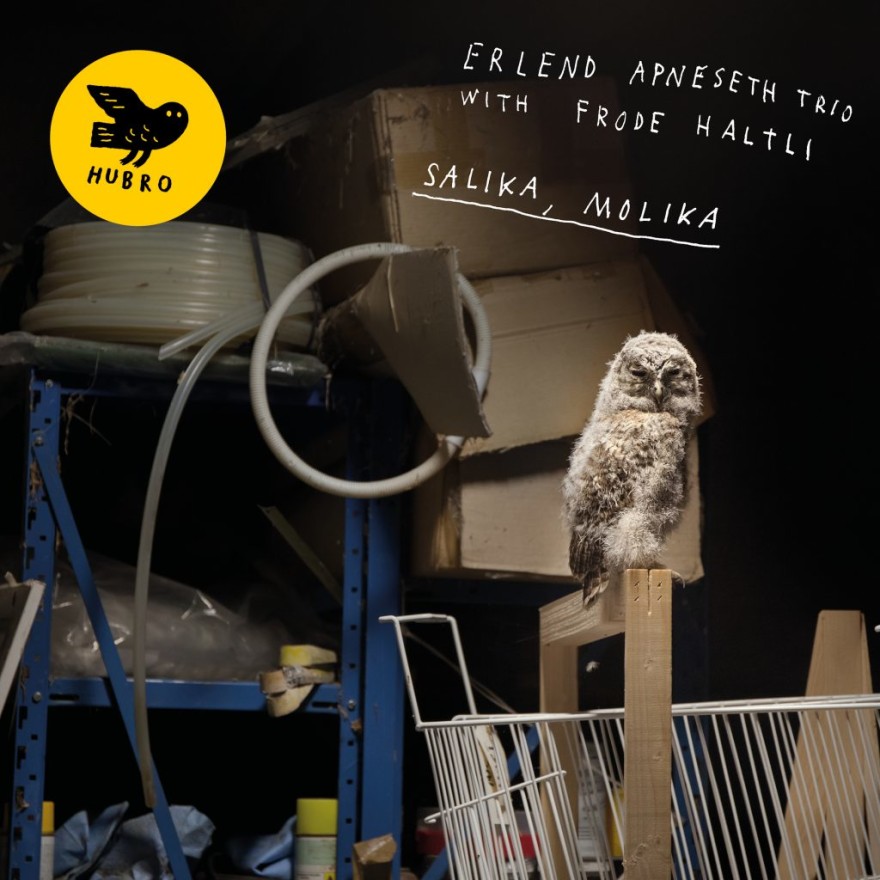 Folk past meets folk future in the Erlend Apneseth Trio’s new album of music, sound and spoken word, featuring accordionist Frode Haltli.
The third album by the trio of Erlend Apneseth – Norway’s new star of the Hardanger fiddle – builds on the foundations set by their acclaimed debut recording, ‘Det Andre Rommet’ (which was nominated for a Norwegian ‘Grammy’) and its equally praised follow-up, ‘Åra’, to create a thrillingly contemporary-sounding amalgam of old and new, mixed and co-produced once again by Jorgen Traeen (Jaga Jazzist, Røyksopp, etc). Commissioned by Bergen Kjott, a former meat packing factory now converted to artist’s studios and performance space, and partly recorded there, ‘Salika, Molika’ combines elements from traditional folk music with experimental improvisation and electronics to produce a fascinating hybrid form where inspired acoustic picking on fiddle and baritone guitar or zither plus percussion is matched by live sampling and processing to create intricately patterned tessellations of sound. The addition of the celebrated accordionist and composer Frode Haltli – on whose masterly Hubro album of 2018, ‘Avant Folk’, Erlend Apneseth played – deepens the mix to produce a denser yet more nuanced ensemble-sound, while the incorporation of spoken word and ambient recordings – following a model first established in ‘Åra’ – provides a further discursive layer to the musical text.

Rather than over-egging an already rich pudding with too many ingredients, the resulting palimpsest of music, sound and spoken word comes across as entirely natural-sounding, while much of ’Salika, Molika’ positively rocks, with compulsive, middle-eastern influenced grooves riffing on minimalist ear-worm melodies and trip-hop beats. Elsewhere, eerie glissando drones, plucked strings and the accordion’s wheezy sighs meet the repetitive pulse of what sounds like percussive raindrops. This is deeply rooted music, at times so ancient-sounding that it feels like it was dug up out of the ground. At other times, the effect suggests a heroically modernist, mid-twentieth century take on medieval sources, rather as if Penderecki or Ligeti were re-scoring Bergman’s ’The Seventh Seal’. ’Salika, Molika’ is also very consciously structured as a kind of sonic journey, the music first emerging from – and then eventually returning to – whispers of pure sound, while in between various modes and influences are picked up and tried out. Throughout, the band – which with the addition of Haltli becomes a four-way supergroup – plays superbly. Guitarist Stephan Meidell is already a star of the Hubro catalogue with his solo album, ‘Metrics’, and as a third of the group Cakewalk; percussionist/drummer Oyvind Hegg-Lunde – who plays with Meidell in the duo Strings & Tympani – is also a member of the influential band Building Instrument.

“The project started with a commission from Bergen Kjøtt to make a concert with new music in a really big room in the old meat factory”, says Erlend Apseneth. “The idea was basically to write music, meet there for a week of rehearsals before the concert, and see how the music would develop in the room. Bringing in Frode was just that we saw this as an opportunity to work with him, all three of us being fans of what he has been doing for several years as a really top class contemporary musician. And I had just worked with Frode on his big project Avant Folk and felt a connection with his ideas, his musicianship, and the way he combines folk with other influences without losing the core of it.”

The music on the album comes partly from the Bergen Kjøtt performance, and partly from the period of rehearsal leading up to it, while the spoken word interludes have a completely different provenance. “The three tracks containing spoken word and musical samples come from the folk music archive in Øyvind and myself’s home county of Sogn og Fjordane in the west of Norway” says Apneseth, who comes from the county’s district of Jølster. “It is not related to Bergen Kjott, but more a continuation of what we have done in our previous releases, using old archive recordings as inspiration, or as the basis for a new composition. These recordings, often recorded in people’s homes, are really inspiring for us because it is a way to connect with the past musically without being nostalgic or romantic. There is something so genuine and real about these voices, and we really want to lift them up and bring them out into the light.”

While the use of the archive recordings could seem unrelated to the rest of the album’s contents, they actually have a vitally important role to play. The three tunes that feature brief excerpts of regional folk musicians Audun Takle, Karen Hatleberg and Harald Takle either talking or singing, are developed from the samples’ rhythmic motifs, which become the basis for subsequent improvisations, uniting past and present into a remarkable synergy of sources.