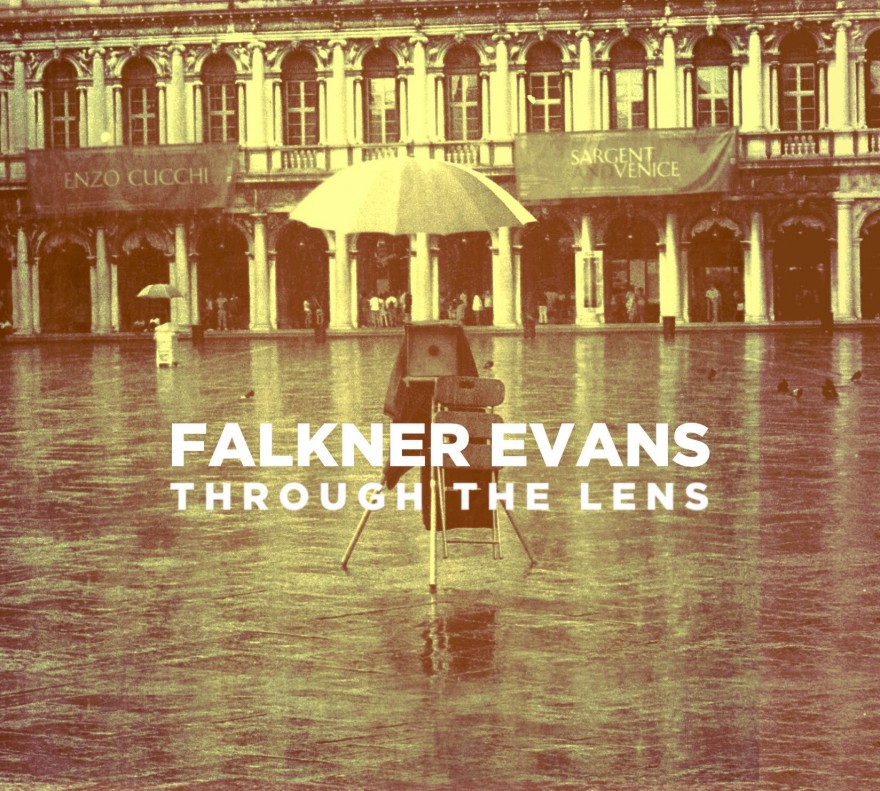 Through the Lens, due out January 20, 2023 via Consolidated Artists Productions (CAP), explores memory, grief, discovery and growth through stunning solo piano improvisations

“[Evans] makes you listen carefully to discover the complexities that he configures beneath his music’s attractive but subdued surface.” – Thomas Conrad, JazzTimes

“A highly personal statement… tranquil and restrained, introspective, full of love.” – Dan McClenaghan, All About Jazz, on Invisible Words

A lens may be just a thin piece of glass, but it can provide the essential distance we need to gain some perspective on our lives. Gazed at through a microscope or a telescope, it can drastically alter scale, bringing far-flung objects close or revealing beautiful details in the minutest particles. Mounted on a camera the lens can freeze a moment, making memories tangible long after they’ve passed.

In the two and a half years that have elapsed since his wife Linda took her own life, pianist and composer Falkner Evans has sought every means available to understand and interpret his new reality. He’s learned to treasure moments – those vibrant memories from the past like the snapshot that graces the cover of his gorgeous and moving new album, Through the Lens, of an antique camera unattended in the rain from a trip that Evans and Linda took to Venice. Or the moments passing eternally by, which Evans channels into a captivating set of wholly improvised new music.

Due out January 20, 2023 via Consolidated Artists Productions (CAP), Through the Lens is the direct follow-up to Evans’ solo debut, Invisible Words. Where that album featured a set of new compositions dedicated to Linda, the new album is significant both personally and professionally as Evans ventures into the realm of free improvisation. Far from an avant-garde experiment, Through the Lens is rich with lyricism and profound emotion, each piece unspooling a compelling narrative imbued with the heartbreaks, revelations, surprises, joys and awakenings the pianist has experienced over the last few tumultuous and unpredictable years.

“When Linda was still here, I would be playing in the living room and she would ask, ‘What is that?’” Evans recalls. “It would just be something off the top of my head, and she would say, ‘That sounds great. Have you ever thought about going into the studio and doing something like that?’ I always replied, ‘I have, but I’m just not ready now.’ And then I was ready.”

Despite the risk inherent in approaching the piano without a single sheet of music, Evans felt confident when the date of the session arrived. In part that was helped by familiarity, as he was once again recording at Samurai Studio in Queens with his longtime collaborator, Grammy-winning engineer Michael Marciano, behind the boards. But chiefly it was a newfound philosophy born of self-examination.

“I can’t believe I’m saying this, but I wasn’t nervous at all,” Evans says. “As musicians or as human beings, we’re always trying to find out what works for us, what doesn’t work for us, and how we move forward. I’ve learned a lot about myself, and I knew that I could do this.”

That process led to some unusually long pieces for Evans, who tends towards concision even when leading his quintet or septet. Only one of the tunes on Through the Lens clocks in under nine minutes, with two passing the ten-minute mark.

“It’s vital to tap into a flow, whether playing completely free or written compositions,” Evans explains. “The narrative lines and the forms were presenting themselves to me as I went along. There were a few times when I thought, ‘You need to wrap this up now.’ But then I realized no, I need to dig deeper.”

The deeply felt places where Evans dared to go on Through the Lens reveal themselves in the aching emotion and transcendent beauty of these five pieces. Beginning from a place of stark introspection, “Soul Witness” tenderly explores the journey of self-discovery that Evans has undertaken. “Linda and I were married for 23 years and together for six years before that,” he says. “So I’ve had to really search my soul to figure out who I am, where I fit in and the way forward.”

Part of that process has been wading back into the dating pool, which serves as inspiration for “Closeness… Desire.” From the tentative to the tender, the confused to the passionate, the piece contends with the conflicting emotions brought on by the romantic urge. Looking for love again after three decades in one relationship has been “strange, disillusioning, beautiful and intense,” Evans says, all feelings that spill onto the keyboard.

“Blues for Lucia” borrows Linda’s middle name for its dedication, a Paul Bley-styled refraction of the blues. The questing, yearning “Living Forever” marks the transition into a new phase of life, one that is fully aware of mortality but looks intently forward to find new reasons for continuing on each new day. The album closes with the title track and its evocations of crystallized memory and bittersweet happiness.

For Evans, Through the Lens stands as musical evidence of the growth and healing he’s undergone in the face of seemingly insurmountable grief. It also communicates the contradictory and often confusing emotions that we all encounter throughout our lives, as unfathomable pain stands shoulder to shoulder with irrepressible joy.

“It hasn’t always been easy,” he admits, “but we’re all in the same boat. We all have to spend our lives questioning and reinventing, and it’s a process. I’m really proud of myself when I realize how far I’ve come and where I’ve arrived. I can’t forget the past – nor do I want to – but I look forward to what the future holds.”

Falkner Evans
Originally from Tulsa, Oklahoma, Falkner Evans is a New York-based jazz pianist with an eclectic musical background. A third cousin to iconic author William Faulkner, Evans grew up on classic 60s rock and R&B before getting hooked on jazz in high school, then garnered his first professional experience playing with famed western swing band Asleep At The Wheel for four years. He moved to New York City in 1985 and quickly became involved in the busy scene, recruiting Cecil McBee and Matt Wilson for his leader debut, Level Playing Field. Two more trio dates followed before Evans expanded his horizons in 2011 for the quintet outing The Point of the Moon and even further for the masterful septet release Marbles in 2020. In the wake of tragedy he crafted his debut solo recording, the breathtaking Invisible Words, in 2021.