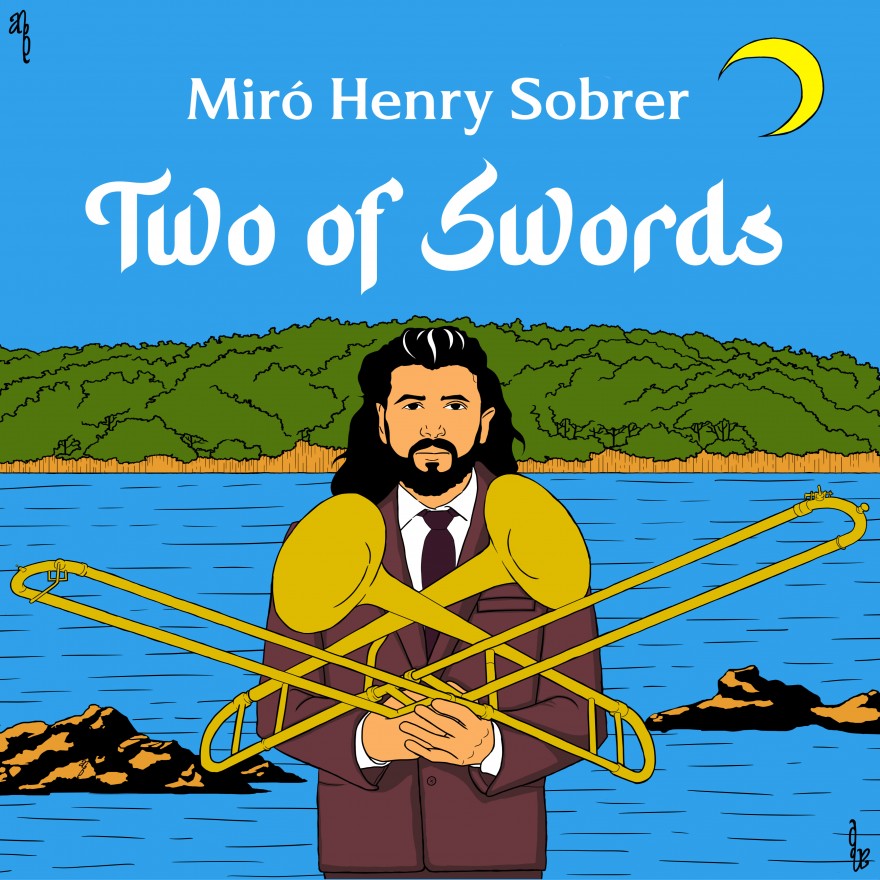 At its best, music can be a door to the wider world and a portal to one’s psyche. Providing an evocative avenue into both realms, the music of trombonist/composer Miró Henry Sobrer offers tantalizing clues and portents set to an irresistible jazz score inspired largely by Catalan poetry, the distilled lyricism of Catalan composer Frederic Mompou (1893-1987), and the  tarot cards interpretation. Conceived in tribute to his late father, Josep Miquel “Pep” Sobrer, Two of Swords is a singular musical sojourn that’s deeply personal and wondrously universal.

Encompassing an expansive palette of African diaspora rhythms, Sobrer’s debut release introduces an artist with an unusually broad vision and a gift for incorporating text into musical settings. As a trombonist, he possesses a huge, pliable sound that can croon, belt or cry. His compositions and arrangements–intricate but unfussy–often elaborate evocatively but not programmatically on the introductory recitation.

Two of Swords opens and closes with lines drawn from a book about tarot card interpretation by Pep Sobrer (1944 – 2015), the prolific Barcelona-born scholar, writer, and translator who spent nearly three decades as a professor of Spanish and Portuguese at Indiana University. Raised in Spain at a time when dictator Francisco Franco banned the teaching and public use of the Catalan language, Prof. Sobrer devoted himself to the Romance tongue, and Miró Sobrer makes extensive use of Catalan poetry translated by his father.

Pep Sobrer’s words offer a guide to the titular tarot card: We carry our strength with ease, with surprising ease, and yet we are blind to it. The setting introduces Miró’s template, as the music rises beneath the recitation, offering elaboration and digression from the text. The heart of the album is the five-piece suite “Dream Combat,” inspired by Mompou’s song-cycle “Combat del Somni.” Each track features an English translation of a sonnet by Catalan poet Josep Janés i Olivé (1913 -1959), but instead of Mompou’s delicately refined settings for piano and voice, Miró reimagines the pieces for a Latin jazz nonet arising from spoken word recitations of the poetry.

The suite opens with persuasively surging horns on “Over you only the flowers” that suggest the introductory phrase of Oliver Nelson’s “Stolen Moments,” but also encompasses sensuous, samba-jazz feel for “Tonight only one wind,” which seems to echo the rising excitement of the text. The 12/8 setting for the extended piece “I had a vision of you being like the sea” captures the rhythm of the shimmering waves. The relationship between text and music is often revelatory, but not in a programmatic sense.

“There’s definitely a feedback both ways,” he said. “I was thinking of the words, choosing rhythms that would fit the poetic themes. And as my compositions developed through those rhythms, I began to rethink the words and understand them in a different way than I did before.”

The album’s other extended work is the three-part “Trinity Dance,” a fascinating confluence of Hindustani classical music, traditional Catalan dance music, and Latin jazz. The closing composition, “Bridge Over the Tiber,” opens with a subtle reference to Cannonball Adderley’s classic “Autumn Leaves” arrangement from 1958’s Somethin’ Else, but quickly departs into a joyously bouncing theme inspired by a melody Sobrer heard a Roma accordionist playing during a visit to Rome.

“I recorded this project just after I graduated,” Sobrer said. “I’d known everyone for at least four years and developed a really nice relationship playing in numerous ensembles. All the people who recorded were my absolute favorite musicians and I knew I wanted to include them on the project.”

“I cannot overstate the influence that Wayne has had on me and my music,” Sobrer said. “And not just music, but life and history and politics. One-hour lessons turned into two or three-hour hangs. He’s such a well-rounded guy and he brings humanity into his music. I became engrossed in Latin music and studied it all four years. I was the Latin trombone guy. It wasn’t a major, but I made it my thing.”

Born and raised in Bloomington, Indiana, Sobrer has been immersed in music all his life. Louis Armstrong and Ella Fitzgerald, Miles Davis, J.J. Johnson, and the Buena Vista Social Club were all regularly featured on the family stereo, while his older siblings also introduced him to the Beatles and seminal hip-hop groups like De La Soul and A Tribe Called Quest. By grade school he was participating in children’s choir and band programs, playing bass and trombone. And by his early teens he was studying and performing music whenever possible. Upon graduating high school Sobrer was offered full scholarships to both the Jacobs School of Music for classical and jazz trombone, as well as the San Francisco Conservatory of Music to study classical trombone performance. He enrolled at SFCM.

The conservatory was stimulating, but after a year he longed for a wider range of study like the diverse array of music he grew up on. Around the same time, he received the dismaying news that his father’s cancer had come back and he had bravely decided to forgo further treatment and end his suffering. Miró took a leave of absence from school and returned home, where his father constantly advised him, “follow your passion.”

Transferring to IU’s Jacobs School of Music, Sobrer found what he was looking for. He learned about Indian classical music from the legendary sarod player Amjad Ali Khan. He deepened his appreciation for rock, soul, funk, and hip hop in Wallace’s contemporary jazz and soul class, and plunged into Latin music via Wallace’s Latin Jazz Ensemble (LJE) and Afro-Cuban ensembles led by Wallace and percussion maestro Michael Spiro. Miró developed an intense interest for writing and arranging under Wallace’s mentorship, and eventually had his arrangements performed by the LJE.

Miró has also performed alongside notable jazz artists including Jeff Hamilton, Tamir Hendelman, Michael Rodriguez, Walter Smith III, Rachel Caswell, John Raymond and Murray Low. He contributed trombone on a track of Wayne Wallace’s and Michael Spiro’s Grammy-nominated album Canto América, and on several tracks on Wallace’s most recent album, Rhythm of Invention. With Two of Swords Miró Sobrer has come into his own as a player, composer and bandleader inspired by his Catalan ancestry and a rhythmic heritage that continues to shape the world.