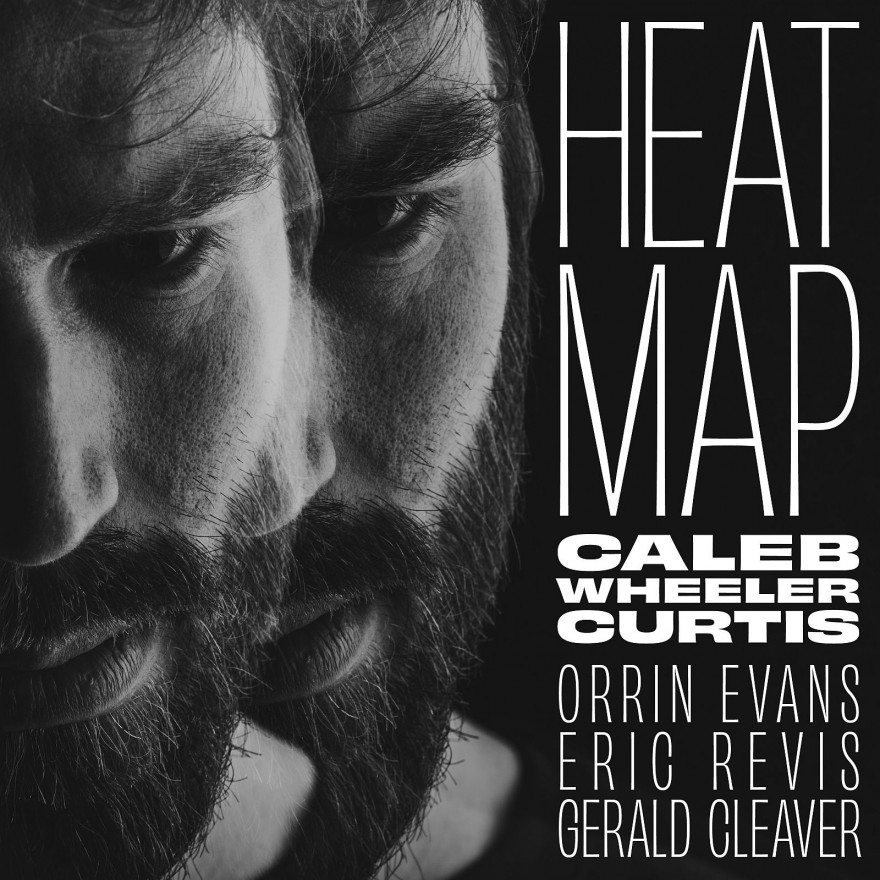 In simple layman’s terms, a heatmap is a way to show where the action is happening. If one were to represent the levels of communication, interplay and chemistry on Heatmap, the brilliant new album from saxophonist/composer Caleb Wheeler Curtis, the image would glow a consistent bright red. But take into account the range of dynamics, the span between explosive improvisation and sparse atmospherics, and you’d end up with a full spectrum of vibrant colors. Which should come as no surprise given the individual voices and shared histories of a quartet that teams Curtis with pianist Orrin Evans, bassist Eric Revis, and drummer Gerald Cleaver.

Due out July 15, 2022 via Evans’ Imani Records imprint, Heatmap is another bold step forward for Curtis, who has released two previous albums as a leader on Imani – Brothers (2018) and Ain’t No Storm (2021). It’s also another example of the way he thrives on collaboration while fiercely retaining his individual vision. That aspect has been showcased on collective projects like the trio Ember, which recorded last year’s No One Is Any One with Evans as special guest; and the ensemble Walking Distance, whose 2018 album Freebird featured pianist Jason Moran and was acclaimed as one of the year’s best jazz albums by the New York Times, among other plaudits.

Curtis composed the music for Heatmap amidst the natural splendor of the prestigious MacDowell Colony, where he enjoyed a four-week artist residency in 2021. Whether it was the inspirational setting, the solitude or simply his own instincts, Curtis emerged with a set of music that leaves ample space for the album’s remarkable improvisers to explore and invent.

“Part of that was just recognizing that I like music with space in it,” Curtis says. “It’s easy to get wrapped up in the idea of throwing everything at the wall, which – in theory – sounds bigger and more confident. But I wanted to appreciate the sound of the music in the air. You can hear the detail in the playing, and really hear the musicians as people. And I’m working with three singular musicians whose playing has real weight.”

Heatmap represents Curtis’ latest venture into what he jokingly refers to as “the Orrin Evans extended universe.” The connection began through the Philly-based pianist’s Captain Black Big Band, with Curtis appearing on both of the band’s Grammy-nominated albums, Presence and The Intangible Between. He also performs on Evans’ 2016 release #knowingishalfthebattle alongside Kurt Rosenwinkel and Kevin Eubanks, among others.

That connection led Curtis to Eric Revis. The renowned bassist shares a storied history with Evans, including the collective trio Tarbaby with drummer Nasheet Waits. Revis shared bass duties with Luques Curtis on Caleb’s Brothers and expressed his interest in working more extensively with the saxophonist. Revis and Gerald Cleaver have collaborated in the bassist’s own trio as well as that of pianist Aruán Ortiz, though the drummer has not crossed paths often with Evans, making for a thrilling new hook-up fueled by the underlying web of connections.

The full range of hues is on display from the outset on the album’s title track, which begins with Evans’ alluring and mysterious solo piano, soon accented by Cleaver’s chattering cymbals; the tune builds in intensity and combustibility as the quartet engages in richly layered collective improvisation, culminating in Curtis’ muscular, sharp-angled melody.

Each piece hints at its essential character in its title, a sensation or impression that is at the core of the minimal yet vivid ideas that the composer uses to spark the band. “Tossed Aside” self-deprecatingly references the insinuating, deceptively casual melody that ambles through the airy, floating rhythms. The Ornette Coleman-esque “Surrounding” is agitated and enveloping, while “Limestone” proceeds with the crawling pace and imposing force of erosion at work on a primeval foundation. “Splinters” abounds with thrusting barbs and piercing shards where “Trees for the Forest” luxuriates in the awe-inspiring beauty of towering trees, seeming to float in a fog-shrouded forest canopy.

Motion and action shape many of the pieces on Heatmap – witness the way that Cleaver’s rumbling percussion threatens to shake loose his bandmates throughout “Trembling,” or closer “Spheres” revolves and rotates: circles within spirals, orbits and meshing gears. Then there’s the stark contrast between the hushed and elusive “Whisperchant” side by side with the wild, cathartic outbursts and eruptions of “C(o)urses.”

“Heatmap is about the search for an essence,” Curtis concludes. “The construction of the music may be interesting, the concepts may be of deep conviction, the architecture may be important – but ultimately, the sound and its various qualities of timbre, texture and dynamics are what give this music its intimacy and vitality. The action is here – in the making of the music.”

Brooklyn-based saxophonist Caleb Wheeler Curtis “lives at the junction of rigorous preparation and willingness to explore” (Jazz Speaks). He has released two albums as a leader on Imani Records: Brothers (2018) and Ain’t No Storm (2021). Neighborhood, the 2015 debut album from the collective quartet Walking Distance, was met with critical acclaim, echoed by its follow-up, Freebird, which featured pianist Jason Moran and was widely praised by The New York Times, DownBeat Magazine, Bandcamp, JazzTimes and others. His collaborations also include the collective trio Ember, whose 2021 sophomore release No One Is Any One featured Orrin Evans; a 2020 trio outing with bassist Rashaan Carter and drummer Mark Ferber; and a 2022 duet release with Swiss pianist Laurent Nicoud. Caleb also appears on two GRAMMY nominated albums by Orrin Evans’ Captain Black Big Band and has worked with such extraordinary musicians as Mulgrew Miller, Ravi Coltrane, Gerald Cleaver, Bill McHenry, Duane Eubanks, Eric Revis, Seamus Blake, Marta Sánchez, Darius Jones, Jon Irabagon, and many others.