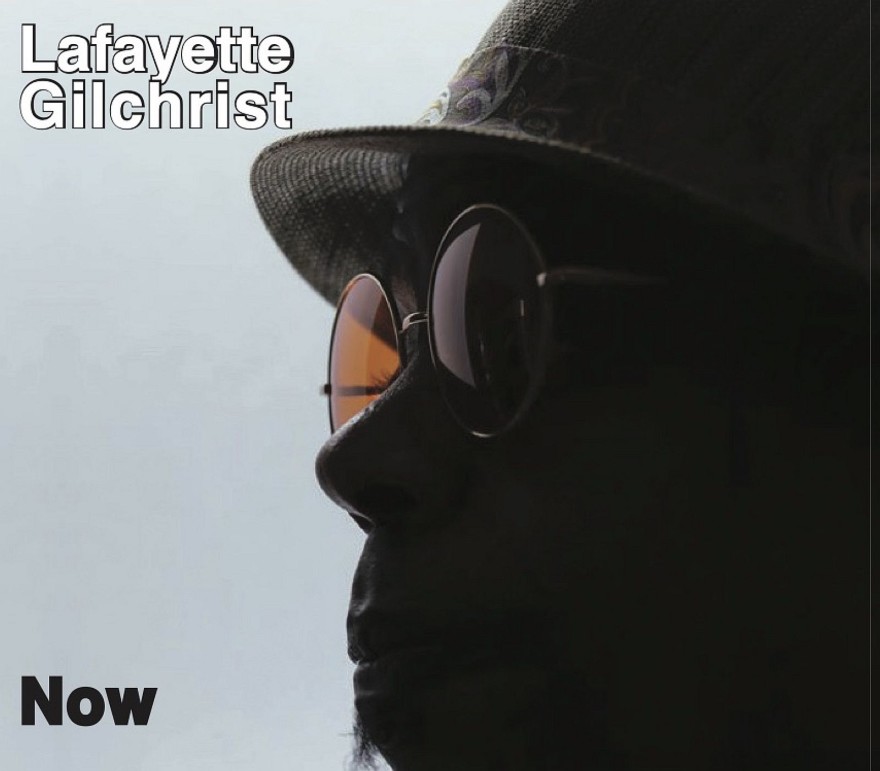 “New Orleans barrelhouse piano, the Impressionism of Ravel, and Duke Ellington’s jaggy solo-piano sound form the bedrock of Lafayette Gilchrist’s style at the keyboard. But if there’s one big influence on the way he thinks about rhythm, it’s the deeply swinging ‘pocket’ of a classic go-go beat. With its classic loping groove, built on heavy hand percussion and call-and-response flow, go-go is the unofficial musical idiom of Gilchrist’s native Washington, D.C.” – Giovanni Russonello, The New York Times

Pianist, composer and bandleader extraordinaire Lafayette Gilchrist returns to the trio format on his engrossing, self-released double disc, NOW, the follow-up to last year’s critically acclaimed solo piano album, Dark Matter, which many critics cited as one of 2019’s best jazz releases. On NOW, Gilchrist’s first trio recording since his 2007 release 3, the pianist leads his formidable group Specials Revealed, featuring bassist Herman Burney and drummer Eric Kennedy. The three musicians have developed a deep rapport from years of playing together in other people’s bands. When the trio convened to record in November 2019, Gilchrist was bursting with creative energy.

The album begins with Gilchrist’s signature tune, “Assume the Position,” a protest song about police violence that was featured on HBO’s crime drama The Wire. Atop a combustive, deep-pocket groove, Gilchrist unleashes his signature two-handed improvisations, often marked by granite-hard rhythmic attacks, rumbling blues-laden melodies, a striking harmonic sense and off-kilter improvisations.  NOW includes other socially and politically conscious compositions as well, such as the dramatic “Bmore Careful,” which examines crime and police brutality in Baltimore, where Gilchrist has lived since 1987. The piece features rumbling tremolos, a stuttering groove and a cinematic melody that fluctuates between menacing and wistful.

Gilchrist notes that the 2015 death of Freddie Gray while in police custody garnered worldwide coverage. “What I would like people to understand is that when you come to Baltimore, you need to show some respect for the struggle within the town and how strong the people are on the ground here.”

Elsewhere on NOW, Gilchrist addresses other socio-political concerns. On the dreamy, oddly hopeful “Old Shoes Come to Life,” which Gilchrist conceived after watching an episode of attorney Antonio Moore’s YouTube show Tonetalks, he explores the economic wealth gap between races in the United States. The skulking “On Your Belly Like a Snake” was inspired by a scene from Haile Gerima’s 1993 movie Sankofa, which depicts a conversation between Shango, a rebellious field slave who’s just been beaten, and Shola, a compliant house slave. Shola advises Shango to be more agreeable with the slave owners to avoid violence. “Shango fires back ‘You’re never going to get your freedom until you learn how to crawl on your belly like a snake.’  So, the song’s in the spirit of the Maroons of the American diaspora, i.e. Brazil, Haiti, Cuba, Florida, South Carolina and New Orleans,” Gilchrist recalls.

NOW also contains several lovely tunes centered on affairs of the heart. One of those is the stunning “Newly Arrived,” with its entrancing melody and suspenseful romanticism. Gilchrist’s inspiration for the song was Sade’s 1988 classic tune “Love Is Stronger Than Pride.” On the haunting ballad “The Wonder of Being Here,” which touches on the love that remains after a short-term romance, Gilchrist unravels a melody that sounds as if it was lifted from Abbey Lincoln’s songbook. Other amorous tunes include the ballad “Say a Prayer for Our Love” and the torrential “Tomorrow Is Waiting Now (Sharon’s Song).” Gilchrist penned the latter for a friend to encourage her to never give up hope, even during the darkest hours.

Throughout NOW, Gilchrist’s striking two-handed pianism radiates as he anchors his rugged yet sensual improvisations with stride, ragtime and jump blues in the tradition of Earl “Fatha” Hines, Willie “The Lion” Smith, Eubie Blake and Memphis Slim. “I was always attracted to the old music,” Gilchrist says. “It’s like the regional sounds that those guys got out of the piano — the East Coast, the West Coast, the Deep South and the different approaches.”

Born in August 1967 in Washington, D.C., Gilchrist’s life as a pianist began at 17 while he was studying economics at University of Maryland, Baltimore. On his way to an English class during his freshman year, he wandered into a recital hall and began pecking out melodies and riffs on a Steinway piano.

Gilchrist subsequently spent many hours teaching himself piano and auditing music theory classes. By the time he graduated, he had started his career as a pianist and composer. He formed his first ensemble, New Volcanoes, in 1993 and released his debut album, The Art is Life, that same year. He’s since released 13 other albums as a leader. In addition to The Wire, his music has been featured on HBO’s Treme and The Deuce. “Gilchrist’s writing weaves together old-school funk rhythms with hip-hop cadences and raw street beats,” says Troy Collins in All About Jazz. “His melodic sensibility embraces the esoteric angularity of Andrew Hill and Sun Ra as much as the emotional directness of the blues.”

In addition to his work as a leader, Gilchrist has also performed as a sideman with a host of jazz luminaries including saxophonist David Murray, singer Cassandra Wilson, trombonist Craig Harris, bassist William Parker and drummer Andrew Cyrille.