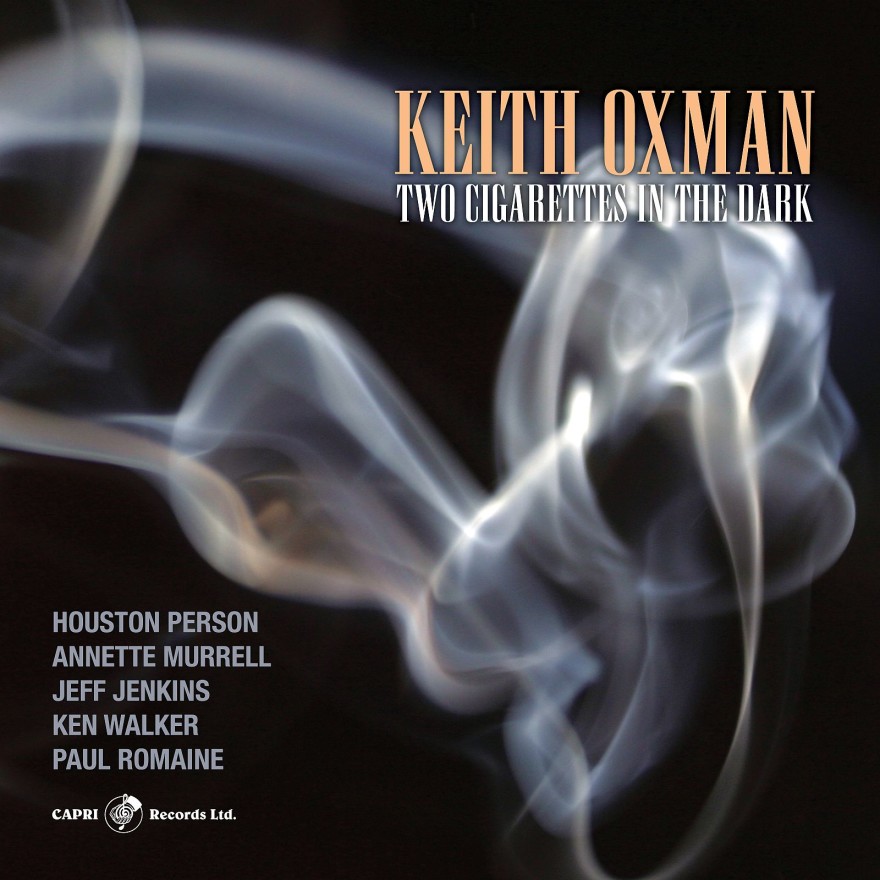 Benny Golson hailed Keith Oxman as a musician “of great consequence,” while NPR described Houston Person as long “one of the most soulful jazz players on the scene”.

Two Cigarettes in the Dark   features the two tenors in a set of originals, standards and vintage tunes by the likes of Johnny Griffin and Hank Mobley, with vocalist Annette Murrell guesting on two songs

Denver-based saxophonist Keith Oxman has collaborated on record with some heavyweight players over the years, including tenor saxophonist Dave Liebman, trombonist Curtis Fuller and alto saxophonist Charles McPherson. For Two Cigarettes in the Dark – his 11th album as a leader for Capri Records, Oxman teamed up with the esteemed tenor-sax veteran Houston Person, who has recorded more than 75 albums over the course of his career. About Person’s six-decade evolution as a player, The Guardian said: “His sound has become uniquely characterful – an idiosyncratic edit of all he has learned, expressed in shrugging hoots, briefly cantering bop sprints, spacious and softly blown ballads.” KUVO-FM Denver chose Oxman’s previous release – Glimpses, with Liebman – as one of its top albums of 2019. And apropos of their 2006 album together, Dues in Progress, Fuller said: “Keith has become one of my closest friends, in a relationship reminiscent of my early musical associations with John Coltrane, Benny Golson and Cedar Walton.”

Two Cigarettes in the Dark presents Oxman and Person in a mix of originals and standards, playing alongside a simpatico rhythm section: pianist Jeff Jenkins (a frequent Oxman musical foil), bassist Ken Walker and drummer Paul Romaine. In addition to tunes by vintage tenors Hank Mobley (“Bossa for Baby”) and Johnny Griffin (“Sweet Sucker”), the album includes a relaxed, grooving take on the title track and two songbook ballads featuring the beautiful phrasings of vocalist Annette Murrell: “Everything Happens to Me” and “Crazy He Calls Me.”

As a measure of his respect for Oxman, Charles McPherson penned the liner notes for Two Cigarettes in the Dark. He points out the alluring stylistic contrast between the sounds of the two tenors, comparing “Keith’s long, flowing lines” to “Houston’s warm, rich tone.” About the feel of Two Cigarettes in the Dark, Oxman says: “It isn’t a typical two-tenor record in that there isn’t an edge of competition, no attempts at cutting or besting. It was a relaxed session and a lot of fun. I’ve been a fan of Houston’s for a long time. I really loved hearing him play in the studio – and I think we complemented each other. Charles is right: Houston has this enormous sound, while mine is leaner. I have more of a Coltrane influence in my playing, whereas you can hear players like Stanley Turrentine in Houston’s. He was 84 when we made this record, and he’s still a master, with great placement of notes, swinging so well, everything from the heart. He also knows virtually every tune imaginable, so it was a surprise that ‘Two Cigarettes in the Dark’ was new to him – but he liked it. I learned it from the Bing Crosby version, though we do it a little faster, medium swing instead of a ballad tempo.”

In his liner notes, McPherson also praises the “fluency” of Oxman’s writing in such originals as “Voss Is Boss,” “Murphy’s Law Impacts L.E.A.P.” and “Murrellancholy,” the latter of which is a tribute to the album’s singer and her lovely way with a ballad. Each of those numbers features the composer as lone horn. About the singer, Oxman says: “We met here in Denver in 1984 and have played hundreds of gigs with each other – we’re dear friends. She lives in Nebraska now, so I’m thrilled that we got to make this record together with Houston. Annette is so believable in everything she sings – she chooses tunes that have some resonance with her life. I wrote the instrumental ‘Murrellancholy’ inspired by her.” The other track that only includes Oxman on tenor is the Jenkins-penned groover “Wind Chill,” which recalls Herbie Hancock in his Blue Note soul-jazz mode. Oxman has recorded frequently with Jenkins, having met him in the ’90s. The saxophonist has known Walker and Romaine even longer, since the ’80s and the ’70s, respectively. “I trust these three guys so much,” Oxman says. “You can try virtually anything and they’ll sound great and really swing. It’s a joy to play with them.”

When he isn’t gigging in clubs and recording with such local allies as Ron Miles, Oxman is a beloved educator who is celebrating his 20th year as a teacher of instrumental music at Denver’s East High School. (The sardonic, somewhat inscrutable title of the album’s tune “Murphy’s Law Impacts L.E.A.P.” refers to an evaluation program for Colorado teachers that is less than popular among the teachers.) Reflecting on the particular value of recording, Oxman says: “In a selfish way, I just love documenting my music and its evolution, as well as collaborations with artists who mean a lot to me, like Houston and Annette. But, of course, I also love it when listeners hear something special in the records and come up to tell me about it. Essentially, I hope people enjoy listening to Two Cigarettes in the Dark as much as we enjoyed making it.”