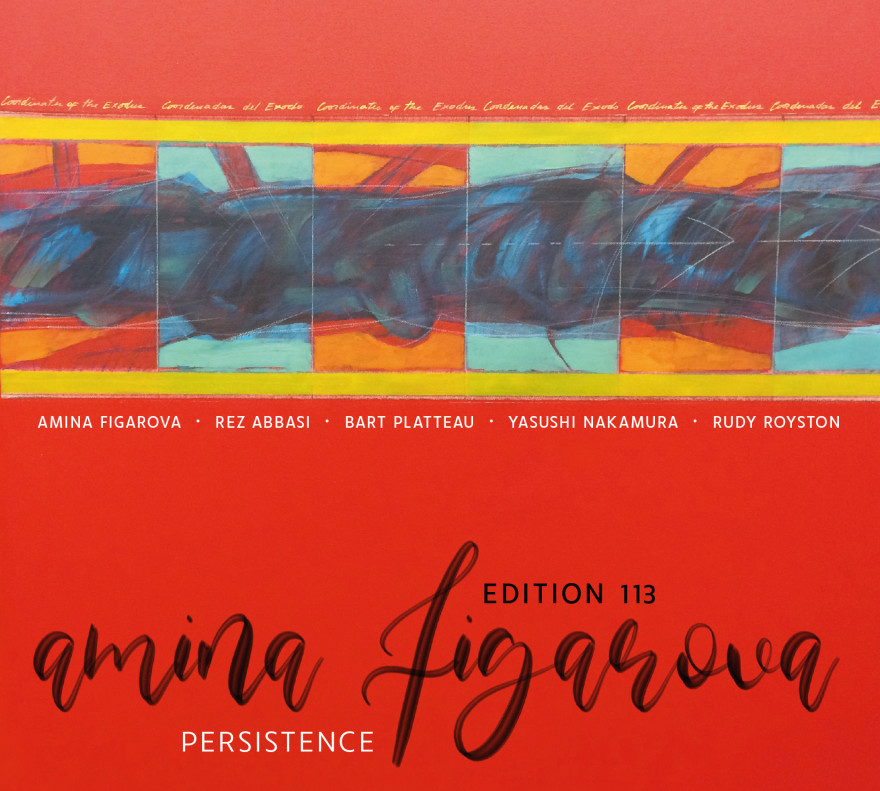 “Among the most important composers to come into jazz in the new millennium.”  – Thomas Conrad, JazzTimes

“[Road to the Sun is] a radiant, diverse and refreshing listen. The initial inspiration for [Figarova’s sextet] was to create a small unit that could convey the scope and power of a big band. By that measure, she’s succeeded, wildly.” – Jeff Potter, DownBeat

After 20 years at the helm of her acclaimed acoustic sextet, taking her across the globe and onto such renowned stages as the Newport Jazz Festival and New Orleans Jazz and Heritage Festival, pianist Amina Figarova embarks on a bold new chapter with the release of Persistence,  on her own AmFi Records imprint, the Azerbaijani-born pianist debuts her exploratory new ensemble Edition 113, an electric band grooving somewhere in the sweet spot between jazz fusion, classic R&B, inventive hip-hop and progressive funk.

Persistence is in one sense a single word autobiography for Figarova. She has forged a fiercely independent path in the music business, from her early aspirations growing up in the former Soviet Union, to pursuing her studies from her native Azerbaijan to Rotterdam and finally to Boston’s Berklee College of Music. Wanting the scale and palette of a big band with the flexibility of a small group, she formed her sextet in 1998 and proceeded to craft an utterly unique body of music for the ensemble, which toured extensively for two decades before celebrating its 20th anniversary in 2018 with the release of Figarova’s last album, Road to the Sun.

“For me, music is a one-way ticket,” Figarova insists. “All I want to do is perform my music with great artists, so I don’t ever look for other solutions and I don’t get tired. It can be hard, but I can be very hard-headed when I’m inspired. That’s persistence.”

The title could also refer to the persistence of the electric influence on Figarova’s music. It may not have shown through very often in her work with the sextet, but Motown was one of her earliest loves, even as she spent countless hours studying classical piano. Another key influence has been Herbie Hancock, in particular his electric Headhunters and Mwandishi bands – which also introduced her to the jazz flute, so it’s not far-fetched to give Hancock some credit for leading the pianist to her flutist husband. Those passions have never left her, so Persistence is the realization of a long-held dream to dive into this sound world.

The opportunity came in part through the couple’s move to Harlem in 2014, where they quickly found themselves surrounded by gifted and open-minded musicians and a living situation ideal for hosting jam sessions. The band name, Edition 113, is taken from the block where Figarova and Platteau make their home.

The songs on Persistence grew out of those jam sessions, which inspired Amina to compose all the tracks for the album in a very different approach to the one that the pianist took when composing for her sextet. “In the past, when it came time for the next record I would sit down at the piano and write,” she recalls. “Here I was just asking musicians to bring some of their own music over and try some of my mine, trying out different things without thinking about recording. It was fun every time and led to a lot of surprises.”

Among their frequent guests was near neighbor Abbasi, with whom Figarova quickly discovered a profound musical and personal connection. Their friendship and vibrant sonic chemistry can be heard throughout Persistence, perhaps nowhere more than on the blistering “R Song,” christened with Abbasi’s first initial on the occasion of his birthday. Yasushi is a favorite bassist who shared acoustic duties with Luques Curtis on Figarova’s 2015 album Blue Whisper. He’s a frequent collaborator with Royston, so pairing the two of them seemed natural.

The gambit pays off out of the gate, as Nakamura’s racing bass-line weaves around Royston’s stuttering groove, with Platteau and Abbasi melding together on the melody line. They slow to an airy sway as Figarova soars with an interstellar Nord solo. “I’ve Got No Time” reprises the closing piece from Road to the Sun, “No Time For,” which the composer had always envisioned in more of a funk frame. A number of rappers retreated from the challenge of the intricate rhythm, until the jazz-influenced JSWISS, who has collaborated with the likes of Nicholas Payton and Chris Dave, more than rose to the occasion with his harried rhymes.

The shimmering “Lil’ Poem” follows, with Platteau conjuring an uncanny voice-flute hybrid from his effects-altered Bb flute, while “Morning Blue” gleans its edge from Abbasi’s serrated tone. Paul Jost’s wordless vocals pair with Platteau’s flute on the gorgeous melody of “Horizons,” and “Bliss” centers on the eloquent poetry of Skye’s World, the son of vocalist Lynette Washington and godson of the legendary Art Blakey.

The album cover features “Coordinates of Exodus,” a striking painting by artist Jorge Posada, whose work conjures feelings of motion and rhythm for Figarova. “His paintings are very dynamic,” she says. “When I walked into his studio and saw this piece I was mesmerized. I see colors when I hear music, and standing there I just thought, ‘This is Persistence.’”

Hailing from Azerbaijan, the New York-based Amina Figarova studied to be a classical concert pianist as a child, entering Rotterdam Conservatory (where she met Bart Platteau, a fellow student from Belgium) to pursue jazz before coming to the United States in 1992 to complete her formal education at Boston’s Berklee College of Music. In 1998 she was invited to the Thelonious Monk Institute’s summer jazz colony in Aspen. She is an internationally influenced—and recognized—composer, pianist, and bandleader. Those three roles come to the forefront in Figarova’s sextets, bands with a remarkable chemistry that bring her detailed arrangements to life. The Amina Figarova Sextet has been a hit at major festivals such as the Newport Jazz Festival and New Orleans Jazz and Heritage Festival. The Amina Figarova Sextet PLUS is a grantee of the 2019 Chamber Music America ‘s New Jazz Works.