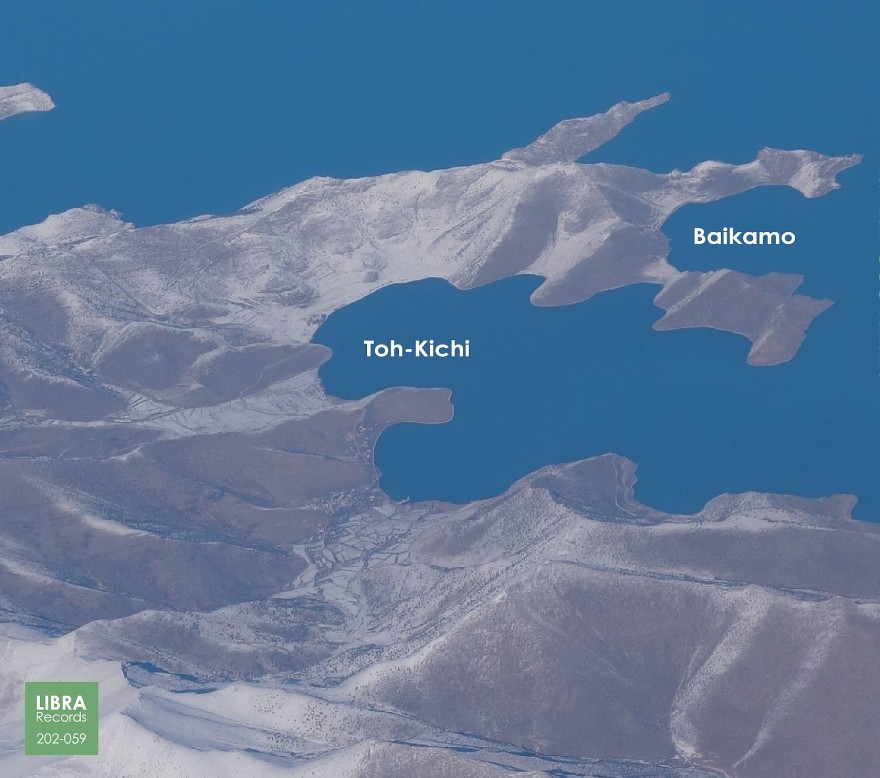 “ The music that comes out of the space between rock and contemporary classical music.” ― Masayuki Baba, Musee

Fifteen years after their last recording together, pianist-composer Satoko Fujii and drummer Tatsuya Yoshida reignite the burning intensity of their Toh-Kichi duet project on Baikamo (December 13, 2019 via Libra). Merging art-rock muscle with free jazz and contemporary classical abstractions, Fujii and Yoshida make music that is both gleefully playful and in-your-face energetic.
“As Toh-Kichi, Tatsuya and I played together even after our last album, Erans, came out in 2004, but not regularly,” Fujii says. “This time, we were asked by an organizer to play a concert in Hiroshima. We wanted to play some new repertoire, so we both composed new pieces for Toh-Kichi. We made a short tour after Hiroshima and we decided to record our new compositions since we had so much fun playing together again!”

And really, for all its avant-garde trappings, Toh-Kichi is a lot of fun. Fujii and Yoshida egg one another on, daring the each other to take chances and rising to the occasion every time. The music may zig and zag in many directions, melodies may explode into pure sound or clashing dissonance, but it is all a high-spirited good time, an excess of joie de vivre. For instance, Yoshida’s “Aspherical Dance,” a melodic framework that suggests areas in which to improvise without limiting options, brims with exuberant energy and even the dissonant tornados of piano notes and percussion aren’t menacing, but more like outbursts of pure joy. On Fujii’s “Baikamo,” Yoshida’s unexpected stops and starts create an asymmetric landscape over which Fujii bubbles and flows with rippling phrases buoyed by percussive chords. Sparks fly on Yoshida’s “Climber’s High” as Fujii, playing the piano like 88 tuned drums, and Yoshida, unleashing rapid fire melodic rhythms, clash and interact. “Ice Age” is one of the most evocative tone poems Fujii has ever recorded, featuring eerie vocalizing from both Yoshida and Fujii, as she elicities otherworldly drones and sparkling plucked notes from inside the piano.

In addition to debuting their new compositions, Fujii and Yoshida also engage in eight free improvisations, each one distinctive and daring. On “Ajhisakdafitch” (Yoshida gave each improv its unique title), Fujii creates unusual timbres on prepared piano, which Yoshida matches with his own colourful responses. They shadow one another in an amazing display of their intuitive connection. “Ovgwebkwum” grows slowly out of strange rattles and hums, as if they are not sure where they’re going, but they are enjoying the journey. “Zpajigemfluxss” overflows with energy. They pick up ideas from one another, then blow them apart, start from a new antic rhythmic melody and bat it around between them.

“I think he is musically very unique,” Fujii says of Yoshida. “He has his own voice and he has no hesitation about making music with his own thoughts and feelings. I believe that is the most important thing for a musician to do. I always respect creators who follow their own voices and don’t imitate others.”

Drummer Tatsuya Yoshida has been called the “indisputable master drummer of the Japanese underground” and a “rhythm section gone ballistic.” Best known as a founding member of the progressive-rock drums + bass duo, The Ruins, he has also been a member of influential zeuhl bands such as Koenjihyakkei, Akaten, and Korekyojinn. In addition to being an occasional member of John Zorn’s legendary jazzcore band PainKiller, he has collaborated with other notable experimentalists such as Fred Frith, Derek Bailey, Keiji Haino, Otomo Yoshihide, and Richard Pinhas, among many others. Yoshida also tours and records extensively as a solo artist.

Critics and fans alike hail pianist and composer Satoko Fujii as one of the most original voices in jazz today. She’s “a virtuoso piano improviser, an original composer and a bandleader who gets the best collaborators to deliver,” says John Fordham in The Guardian. In concert and on more than 80 albums as a leader or co-leader, she synthesizes jazz, contemporary classical, avant-rock, and folk musics into an innovative style instantly recognisable as hers alone. A prolific band leader and recording artist, she celebrated her 60th birthday in 2018 by releasing one album a month from bands old and new, from solo to large ensemble. Franz A. Matzner in All About Jazz likened the twelve albums to “an ecosystem of independently thriving organisms linked by the shared soil of Fujii’s artistic heritage and shaped by the forces of her creativity.”