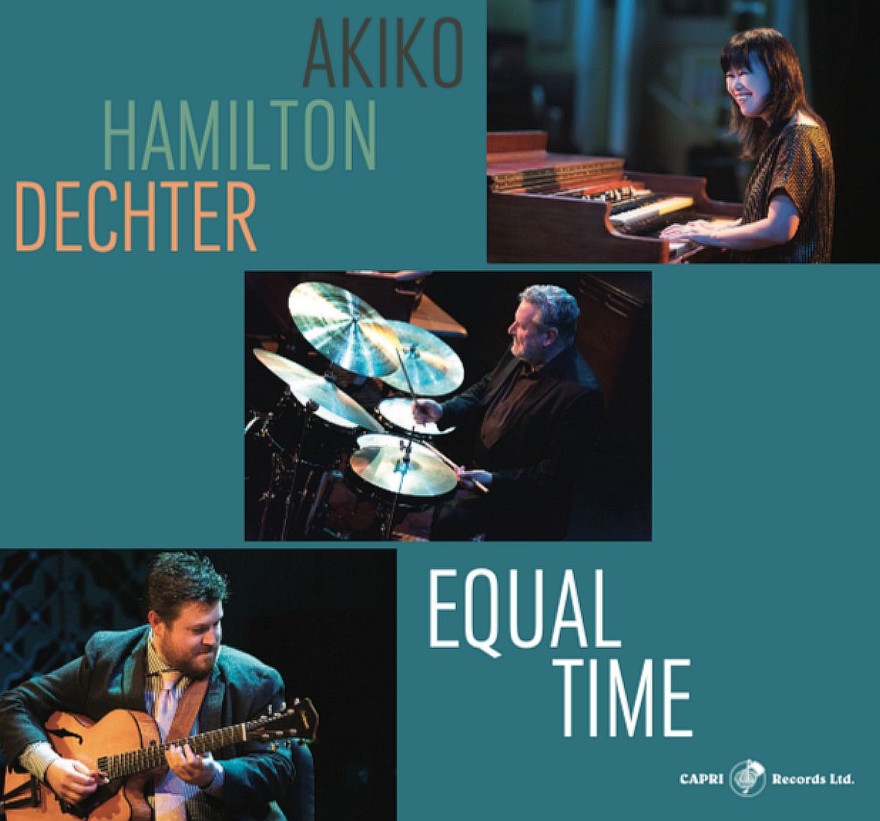 “Akiko’s playing is like watching a flower blooming, a bird spreading her wings in the music world.  Akiko is here to stay.” – Dr. Lonnie Smith

Equal Time unites three virtuosos – two rising stars, the organist Akiko Tsuruga and the guitarist Graham Dechter – and the acclaimed veteran drummer Jeff Hamilton to form a musical alliance based on a shared passion for swinging and the timeless joys of the classic organ trio. Although these cohorts have worked together before in other ensembles, Equal Time fully captures the camaraderie and musical telepathy that they have developed as a team. Building on the organ-drums-guitar configuration that has been the backbone of the organ trio tradition ever since Jimmy Smith hit the jazz scene in 1956, the Akiko-Hamilton-Dechter unit dedicates itself to the proposition that a compact band can – make that, must – produce a mighty sound.

The trio breaks out of the starting gate with “Mag’s Groove,” a Tsuruga blues that firmly establishes the band’s winning combination of intensity, invention and effervescent swing. We immediately hear what is made clear from the album’s start to its finish: this is a bona fide band, not just a meeting of three extravagantly gifted players coming together to stretch out and jam. The arrangements throughout are as focused as the sleek improvisations are intended for maximum impact. Tsuruga, Hamilton and Dechter are each there to support, not to outshine each other; musically, each has the other’s back.

Dechter’s “Orange Coals” further reveals the technical mastery of both the guitarist and the accomplished organist as they trade choruses. Hamilton’s just right solo displays the striking attributes he’s come to be honoured for in the course of his five-decade career: formal perfection balanced by high spirited finesse. “Osaka Samba,” a delightful Tsuruga original, has a happy Walter Wanderley-ish vibe to it, enlivened further by Hamilton’s vaunted brush work. Dechter’s fleet solo positions him as a stylist worth keeping tabs on. You can detect his influences–Wes Montgomery, Barney Kessel, Herb Ellis and Peter Bernstein, among them–but you can also hear how seamlessly he’s incorporated each into his own signature sound. The same goes for Akiko. While Dr. Lonnie Smith is her main influence, ultimately her style bears her own fingerprints. Hank Mobley’s “A Baptist Beat,” originally heard on the iconic saxophonist’s Roll Call album of 1960, is given an appropriately soulful rendition with the guitar and organ providing call-and-response phrases for each other.

Everyone gets to bear down and exhibit serious chops on John Coltrane’s “Moment’s Notice,” an obstacle course of a number from his now-legendary Blue Train album. Unsurprisingly, each instrumentalist passes the test with high grades. The mood changes with “Lion’s Gate,” a gentle ballad from the pen of Tsuruga, who gets to lay into some beautiful old school Hammond playing, tipping her hat to the masters who furnished the path for her. Tsuruga’s impressive pedal work then keeps the groove moving in a spirited take on the standard “I Remember You.” The album concludes with Steve Allen’s “This Could Be the Start of Something Big,” which becomes a brisk tour de force for the extravagant talents of each trio member. The song’s title also provides a hint of, hopefully, things to come. Already sounding as comfortable with each other as a longstanding ensemble, the Akiko-Hamilton-Dechter trio indeed deserves to be a going concern.

Relocating from Osaka, Japan to the U.S. at the urging of the celebrated drummer Grady Tate, organist Tsuruga has gone on to release numerous, critically acclaimed albums as a leader. Her live recording So Cute, So Bad features both Jeff Hamilton and Graham Dechter.

One of the giants of mainstream jazz drumming, Jeff Hamilton has been heard with the big bands of Woody Herman and Count Basie, and as a member of the popular L.A. 4, as well as with such icons as Ella Fitzgerald, Ray Brown, Monty Alexander and Oscar Peterson. In addition to his work with the Clayton-Hamilton Jazz Orchestra, Hamilton has appeared with Diana Krall both in performance and on recordings. He is features on numerous recordings with the Jeff Hamilton trio.

A member of the Clayton-Hamilton Jazz Orchestra since he was nineteen, the California-born guitarist has also worked with a host of musical luminaries including Wynton Marsalis, Jimmy Heath, Nancy Wilson, Kurt Elling, Eliane Elias and Michael Buble. His Capri recordings include Right on Time (2009) and Takin’ It There (2012).