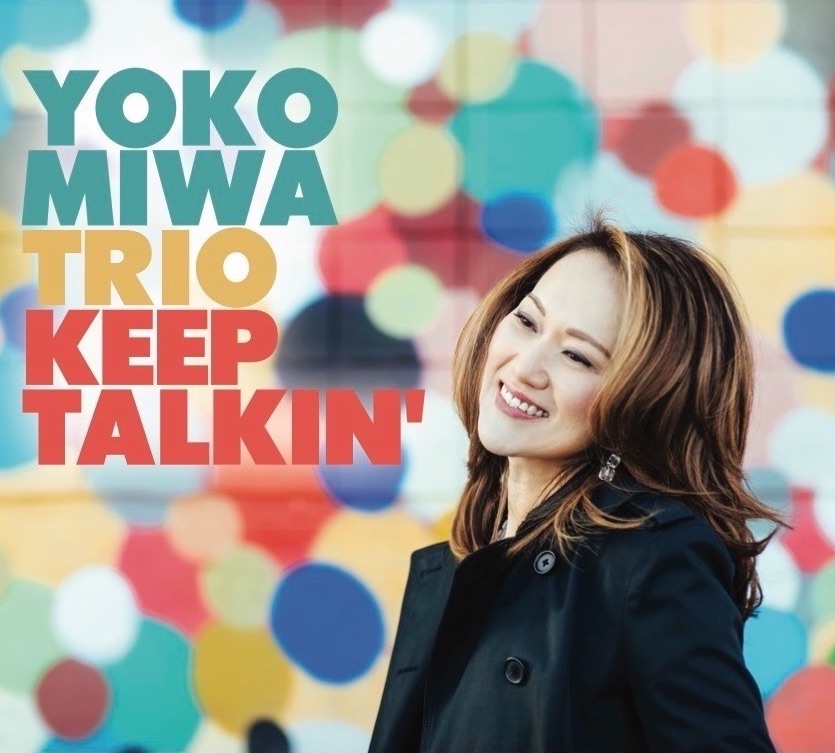 Keep Talkin’, the new trio album by Japanese-born, Boston-based Yoko Miwa, documents a pianist and composer operating at the peak of her powers. While maintaining her undeniable signature, Miwa’s musicianship evokes the harmonic finesse and rhythmic brilliance of key influences like Bill Evans, Keith Jarrett, McCoy Tyner and Oscar Peterson. Her expansive, versatile writing presents both a remarkable ear for melody and an earthy, intuitive feel for groove. And as an arranger and interpreter, Miwa showcases her fantastic knack for programming: From jazz standards to Brazilian music to unsung gems by pop and folk heroes, each of her selections is definitively remade in her image while retaining its core charms.

In the end, those delights coalesce around Miwa the bandleader, who helms gifted players including her husband, the drummer Scott Goulding, and the bassists Will Slater and Brad Barrett with intelligence and dexterity. Or as the Boston Globe said of the Miwa Trio’s previous album, 2017’s Pathways—which hit No. 6 on the JazzWeek chart—her music is “bright and accessible. … Miwa’s technical chops are evident, yet she’s anything but showy; she prizes space in her sound, and leaves room for the deep interplay her group has honed over the years.”

But excellent jazz piano trios are made rather than born, and Keep Talkin’ tells that story as well. A professor at the prestigious Berklee College of Music, Miwa is a rare educator who seems to log just as much bandstand time as she does classroom hours. Over the last two decades, Miwa and her cohorts have worked constantly, mostly in one of America’s great jazz towns. In the elastic, buoyant communication within Keep Talkin’, you can hear the hard-earned lessons of all those gigs together—the unplanned set lists and loose, fun hangs of Boston-area spots like the Mad Monkfish, Les Zygomates and the recently, sadly shuttered Ryles Jazz Club, as well as dates for deep-listening audiences at premier rooms like Scullers, Regattabar, the Blue Note in New York and Blues Alley in D.C. To put it more directly, the material, arrangements and musical conversations on Keep Talkin’ have undergone the intensive testing and refinement that can only come with playing for audiences.

“I love that we have the steady gigs,” Miwa says. “We understand each other, we get familiar with the songs, and we can see the audience’s reaction when we play a new song.” Ensuring that listeners are both intellectually challenged and joyfully engaged is a forgotten art in jazz these days, but the Yoko Miwa Trio and Keep Talkin’ strike an inspired balance between head and heart.

Keep Talkin’ gets an auspicious, hard-grooving start with its title track, a Miwa original and live-set staple that evokes the boogaloo jazz of your favourite ’60s Blue Note LPs. Miwa and company then pay homage to Thelonious Monk, with an “In Walked Bud” that highlights Miwa’s philosophy of reverent reinvention; in robust, woody tones, bassist Slater carries much of the melody. A Miwa original follows, “Secret Rendezvous,” an exercise in the kind of tuneful mainstream jazz-piano mastery that garners repeat spins on jazz radio. Next is one of Miwa’s early compositions, her swinging, romantic “Sunset Lane,” which underscores her profound appreciation for Bill Evans.

Miwa’s take on Charles Mingus’ “Boogie Stop Shuffle,” where the smoking, roiling front line horns of the Mingus Ah Um recording are distilled into Miwa’s two hands, offers a clinic in creative piano-trio arrangement. To honour her long-running love for the Lennon–McCartney songbook, Miwa arranges two gorgeous yet still underrated songs off the Beatles’ Abbey Road—“Golden Slumbers” and “You Never Give Me Your Money.” Her search for new music to interpret never ends, Miwa says, though many songs simply aren’t effective in a jazz piano-trio context. These two heartrending melodies, however, took beautifully to jazz arranging and became live favourites, leading to many requests for a recording. Miwa and Slater share athletic unison lines on the inquisitive “Tone Portrait.” A passionate devotee of Brazilian music, especially the late vocal legend Elis Regina, Miwa heard the Los Hermanos song “Casa Pre-Fabricada” in a version by Regina’s daughter, the singer Maria Rita, and became enamoured of its whimsy and graceful contours.

On “Conversation,” Miwa turns a Joni Mitchell deep cut into a tour de force for gospel-tinged chording and ebullient, pastoral improvisation. (No surprise: It’s the most Jarrett-esque performance on the album.) Rounding out the disc are two more Miwa compositions. “If You’re Blue,” a Monk-ish theme, features Miwa’s original melody atop the changes to Irving Berlin’s “Puttin’ on the Ritz.” “Sunshine Follows the Rain,” recorded during the sessions that became Pathways, began as a shorter piece she crafted for an independent film score. Bittersweet and rhapsodic, Miwa’s performance is impeccably complemented by Goulding’s sensitive brushwork and the beautifully lyrical arco bass playing of Brad Barrett, in his lone performance on the album.

Born in Kobe, Japan, Miwa was trained classically and didn’t become immersed in jazz until she began studying with Minoru Ozone, the late keyboardist, educator and club owner, and the father of pianist Makoto Ozone. Miwa describes the elder Ozone as an “old-school” teacher who instilled in her the importance of playing by ear and absorbing jazz’s language by listening and transcribing. She was employed as an accompanist and piano instructor at his music school, and a waitress at his popular jazz club—where she cut her teeth performing, sometimes off the cuff at Ozone’s request. Tragedy struck Kobe in 1995 with the Great Hanshin earthquake, which leveled both Ozone’s school and club. “That was the scariest thing to happen in my life,” Miwa says. “But I realized that we were very lucky to be alive. A lot of people lost their lives, lost their houses and families.” She enrolled at the Koyo Conservatory of Music, a Berklee affiliate school, and, on a whim, auditioned for a full scholarship prize at the flagship school in Boston. To her astonishment, Miwa won first prize—but even then, she needed convincing from her peers to make the trek.

Once in Boston in 1997, she fell in love with the city and dug into her jazz education. “I was the last one to leave a practice room every night at 2 a.m.,” she recalls. “I was just so excited to meet great musicians—my teachers and fellow students—from all over the world. I felt like my world just changed.” Throughout her years at Berklee, as a student and, later, as an accompanist and a Professor in the Piano Department, she has achieved many personal and creative breakthroughs. She met her husband, Goulding, in a class; in fact, their meet-cute involves a duo performance. As a staff accompanist with plenty of previous experience backing singers, she worked in master classes with the late vocal great Kevin Mahogany, who asked her to gig with him later on. “He was always very nice to me,” Miwa recalls. “He wrote me before he passed away: You are always one of my favourite pianists.”

A Yamaha Piano Artist, Miwa has performed and/or recorded with other luminaries as well, among them Esperanza Spalding, Terri Lyne Carrington, Arturo Sandoval, Sheila Jordan, Slide Hampton, George Garzone, Jon Faddis, Jerry Bergonzi, Johnathan Blake and John Lockwood. As a leader she has recorded seven previous albums, including her acclaimed Japanese debut for JVC Victor Entertainment, 2012’s Act Naturally, which was promoted with a concert tour of Japan. Other career highlights include a spot in the Jazz at Lincoln Center program “Marian McPartland & Friends,” part of the Coca-Cola Generations in Jazz Festival, and a performance in Lincoln Center’s annual Jazz and Leadership Workshop for the National Urban League’s Youth Summit. She has also acted as a panelist for the National Endowment for the Arts.

Consider Keep Talkin’ the culmination of Miwa’s thriving jazz-life-in-progress—her still-evolving work as a player and composer, her relentless search for new songs and her tireless live-performance ethic, which has allowed her and her band to entertain generations of jazz fans. “I hope people will see who I am as a musician and a pianist on this album,” she says.