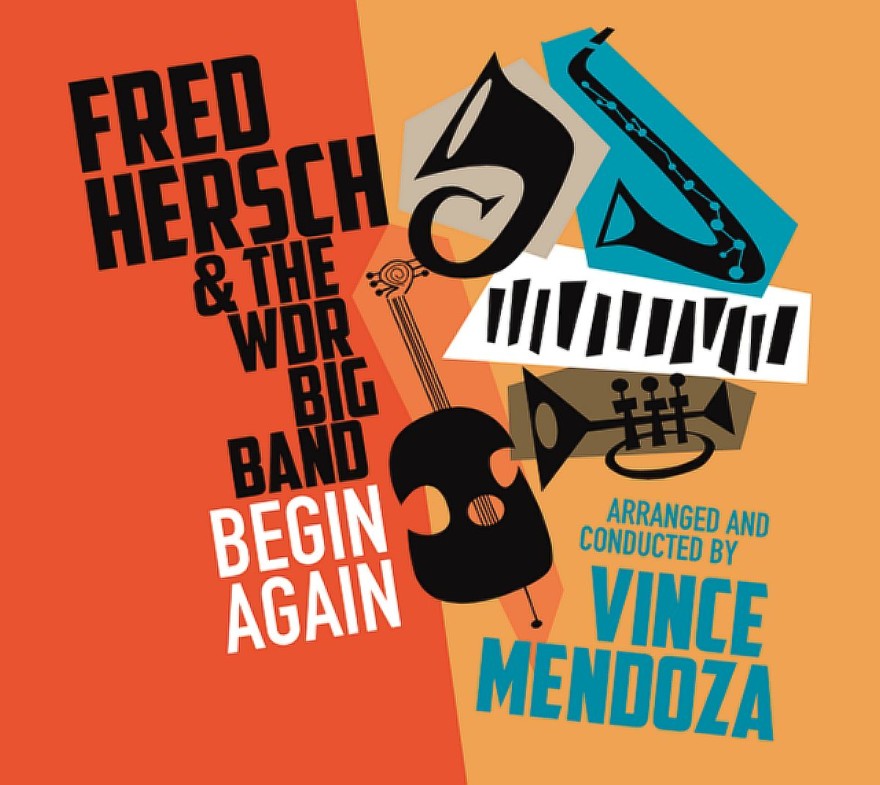 One of the most influential jazz pianists and composers of his generation-a “living legend,” per the New Yorker-Fred Hersch has offered a panoramic range of work throughout his four-decade career. This 14-time Grammy nominee has led era-defining piano trios, like the unit he helmed with bassist Drew Gress and drummer Tom Rainey, which can be heard on last year’s acclaimed archival release, Fred Hersch Trio ’97 @ the Village Vanguard. His even longer-running current trio, with bassist John Hébert and drummer Eric McPherson, has given us such staggeringly beautiful documents as 2018’s Live in Europe, of which DownBeat wrote, “Improvisation doesn’t engage the listener any more playfully than this.” Hersch has been recognised, by the New York Times, as an artist whose “irreducible gift or skill is for solo playing,” and 2017’s Open Book is a sterling example of his mastery in that format. He’s also garnered renown for his remarkably empathetic duo sessions, with musicians like Julian Lage and Bill Frisell, and as a peerless sideman to jazz icons and a nonpareil accompanist for our best singers.

Some of Hersch’s offerings have been without precedent in jazz and contemporary music history. His ambitious 2011 masterwork, My Coma Dreams, combined elements of jazz performance, theatre and visual art to tell a harrowing but ultimately inspiring story of love and mortality. His raved-about 2017 memoir, Good Things Happen Slowly: A Life In and Out of Jazz, is an extraordinary, unflinching book that gracefully melds the story of Hersch’s artistic life with his journey as the first openly gay, HIV-positive jazz musician-in the process providing a candid document of jazz in New York and the early years of the AIDS epidemic.

Begin Again, Hersch’s new Palmetto release featuring the Cologne-based WDR Big Band, arranged and conducted by six-time Grammy winner Vince Mendoza, serves as both an expertly curated overview of the pianist’s oeuvre and a singular new entry in his expansive discography. The album features nine of Hersch’s original compositions, plucked from throughout his various projects and preferred formats, including one previously unrecorded piece. Mendoza’s impeccable orchestrations-robust yet refined, essential yet understated-manage to bolster Hersch’s striking gifts for melody and expressiveness while also showcasing the remarkable abilities of the Grammy-winning WDR band, which DownBeat recently described as “one of Europe’s finest large jazz ensembles.” In Ellingtonian fashion, Mendoza has through experience gained a deep understanding of the WDR’s members as distinctive voices (not to mention masterful doublers), and he applies these timbres in brilliantly coloristic ways. On Begin Again, that also means granting well-deserved solo opportunities to thoughtfully expressive players like the alto saxophonists Johan Hörlén and Karolina Strassmayer, the tenor saxophonist Paul Heller, the trumpeters Ruud Breuls and Andy Haderer, the trombonists Ludwig Nuss and Andy Hunter, and the drummer Hans Dekker.

“Vince was very respectful and attuned to the fact that each one of these pieces has its own world,” Hersch says. “And the fact that we had these 17 musicians at our disposal to create each piece on its own terms was really great. It was a thrill for me to be able to amplify the uniqueness of each piece.” As per usual with Hersch’s recordings, Begin Again boasts a keen, story-like sense of programming and a knack for melody that is direct and affecting yet consistently surprising.

Begin Again kicks off with its previously unrecorded title track, a fluid progression of shifting meters that developed inside Hersch’s trio with Hébert and McPherson. The twilit romance that is “Song Without Words #2: Ballad,” which Hersch describes as “probably the closest I’ve ever come to writing a standard ballad,” originated on a project he released on Nonesuch in 2001. Hörlén’s alto spotlights here are powerfully lyrical, just as they are on “Begin Again.”

“Havana,” first released in 2012 on the Hersch trio’s double-disc Alive at the Vanguard, touts an idiosyncratic form with a strong bassline. Although, despite its title, it contains no explicit Cuban influence, the composition’s kinetic momentum and Mendoza’s tenacious low-brass voicings summon up a spirit of rumba-like adventure. A dance score, “Out Someplace” premiered at the Kennedy Center in 1999, and was commissioned by the Doris Duke Foundation’s Millennium Project for the Bill T. Jones/Arnie Zane Dance Company. This movement, “Blues for Matthew Shepard,” imagines the horrific final hours endured by Shepard, whose brutal murder in Wyoming in 1998 ultimately led to groundbreaking hate-crime legislation. Hersch’s writing, Mendoza’s arranging and the ensemble’s performance are both calmly cinematic, in their ability to communicate the abject savageness and loneliness of Shepard’s death, and bursting with passion, in their ability to use avant-garde strategies as musical metaphors for violence and grief. Mendoza suggested that Hersch talk to the band prior to the recording, to explain who Shepard was and what his spirit has meant to the LGBT community. “I just thought about Matthew out there,” Hersch says, “and how lonely that must have been, and how scary. So the piece is actually like a film.”

“Pastorale,” which first appeared on Hersch’s Alone at the Vanguard, from 2011, is an homage to Schumann’s “Kinderszenen (Scenes From Childhood),” whose warm, comforting textures Hersch enjoyed digging into as a very young musician. The oldest number on Begin Again, “Rain Waltz,” dates back to the early 1980s and exhibits Hersch’s smart yet accessible m.o. as a composer-or, as he refers to himself, a “tune-writer,” who reveres the adaptable work of Monk, Kenny Wheeler and Wayne Shorter. “It’s really fun to play,” he says. “It’s a bit challenging, but I think it’s a good springboard for improvisation.” The New Orleans nod “The Big Easy,” which debuted on the trio’s Live in Europe, gets an aptly, authentically grooving and swinging treatment, replete with plunger-muted solos, trombone smears, bold, brassy punctuations and the like.

The buoyant drum feature “Forward Motion,” the title composition off Hersch’s 1991 Chesky release, is an example of unbridled optimism. (A landmark of sorts in Hersch’s catalogue, the Chesky release was the first album to feature his original music exclusively.) To “leave the record with a kind of musical benediction,” says Hersch, he taps into My Coma Dreams for a faithful take on “The Orb.” Consisting mostly of Hersch immersed in elegiac solo-piano reflection, with sublime orchestration by Scott Ninmer, the piece is a love letter to Hersch’s longtime domestic partner, Scott Morgan. It was Morgan, foremost among many others, who saw him through the two-month-long coma, caused by pneumonia, that gives Hersch’s inspired multimedia piece its title.

My Coma Dreams may have conveyed one of the most intense, heartrending and ultimately hopeful personal tales ever expressed through jazz performance, but all of Hersch’s recordings contain compelling narratives-especially Begin Again. “Every one of my albums has a story about how it was recorded, how it came together, why it came to be,” Hersch says. “I want each project to be special and have a reason to exist. I think this is a really nice change of pace, and a great addition to my catalogue.”

“I’m so glad it worked out as wonderfully as it did,” he adds. “Vince trusted what I had written, and I knew from the start that he would respect what I wrote and add his own special talents. And I am pleased to say that’s what happened.”

Called “the most arrestingly innovative pianist in jazz over the last decade” by Vanity Fair and “an elegant force of musical invention” by the Los Angeles Times, Fred Hersch is among the most respected jazz musicians of his generation and one of the most influential pianists in recent jazz history, with pupils including Brad Mehldau and Ethan Iverson. He has been nominated for Grammy Awards 14 times, and is the recipient of a 2016 Doris Duke Artist Award, Jazz Journalists Association Awards for Jazz Pianist of the Year in 2016 and ’18, and the 2017 Prix Honorem de Jazz from L’Acádemie Charles Cros, a lifetime-achievement honour.

Considered one of the most lauded and exploratory composers and arrangers in jazz and contemporary music, Vince Mendoza has received six Grammy Awards and 33 nominations, as well as frequent comparisons to trailblazing orchestrators like Gil Evans. His credits as an arranger include projects with Björk, Chaka Khan, Al Jarreau, Bobby McFerrin, Diana Krall, Melody Gardot, Sting and Joni Mitchell. He’s released nearly a dozen celebrated albums as a leader, the most recent being the Grammy-nominated Homecoming, also featuring the WDR Big Band. His original music and arrangements have been performed by many of the world’s finest ensembles, including the London Symphony Orchestra, the Chicago Symphony Orchestra and the Berlin Philharmonic.