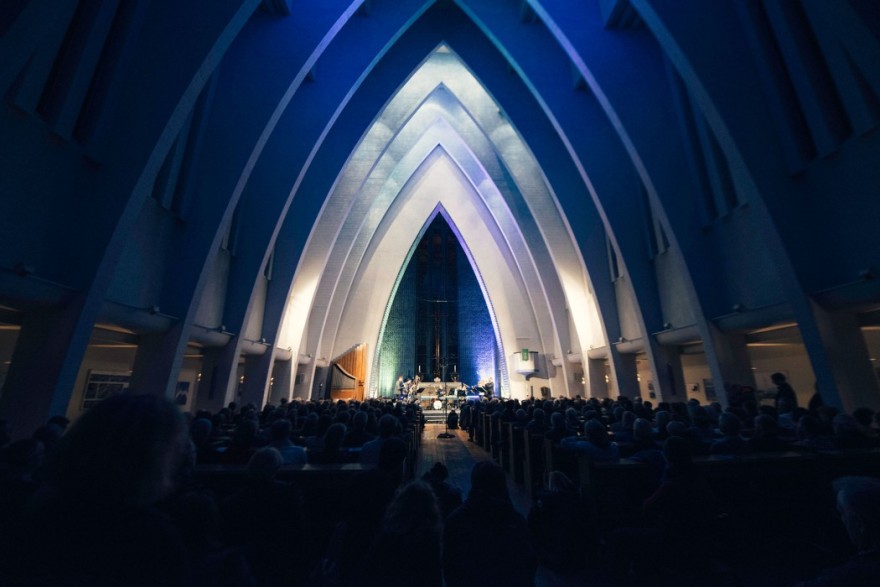 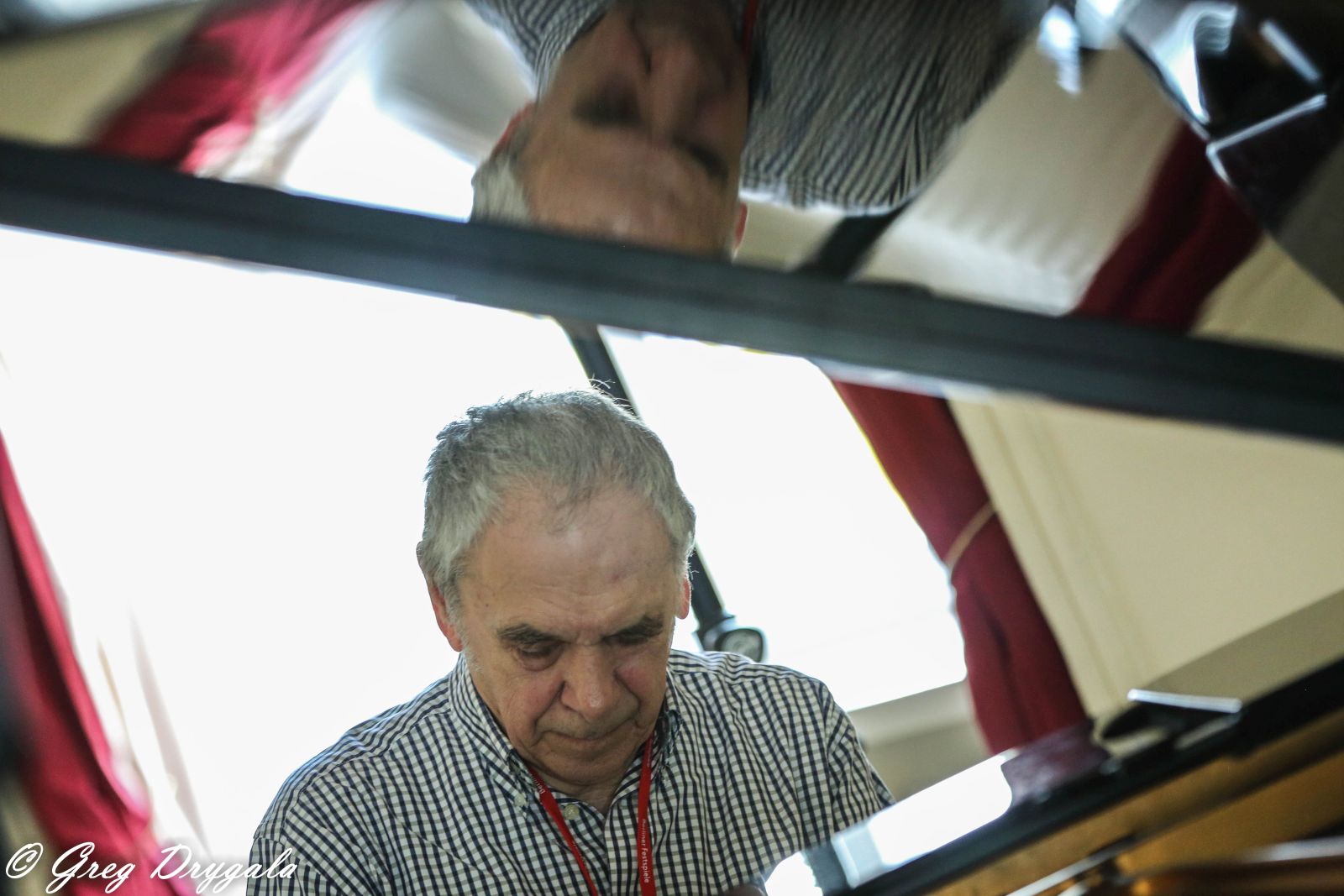 Now 83, René Urtreger is the last survivor of the quintet that recorded the soundtrack to “Ascenseur pour l’échafaud”. After studying piano at the conservatoire in Paris, the city of his birth, he gravitated to the jazz scene in the early 1950s and became a favourite accompanist of many distinguished American soloists, among them Lester Young, Don Byas, Lee Konitz, Chet Baker, Dexter Gordon, Stan Getz and Ben Webster. His first album, released in 1955, was dedicated to the music of Bud Powell, his principal influence. In the 1960s he became the musical director of the singer Claude François and provided the music for several films by Claude Berri. He returned to jazz in the late 1970s; since then he has performed and recorded frequently with his own trio. Tonight, he will give a solo recital and talk about his memories of recording the music for “Ascenseur pour l’échafaud” with Miles Davis. 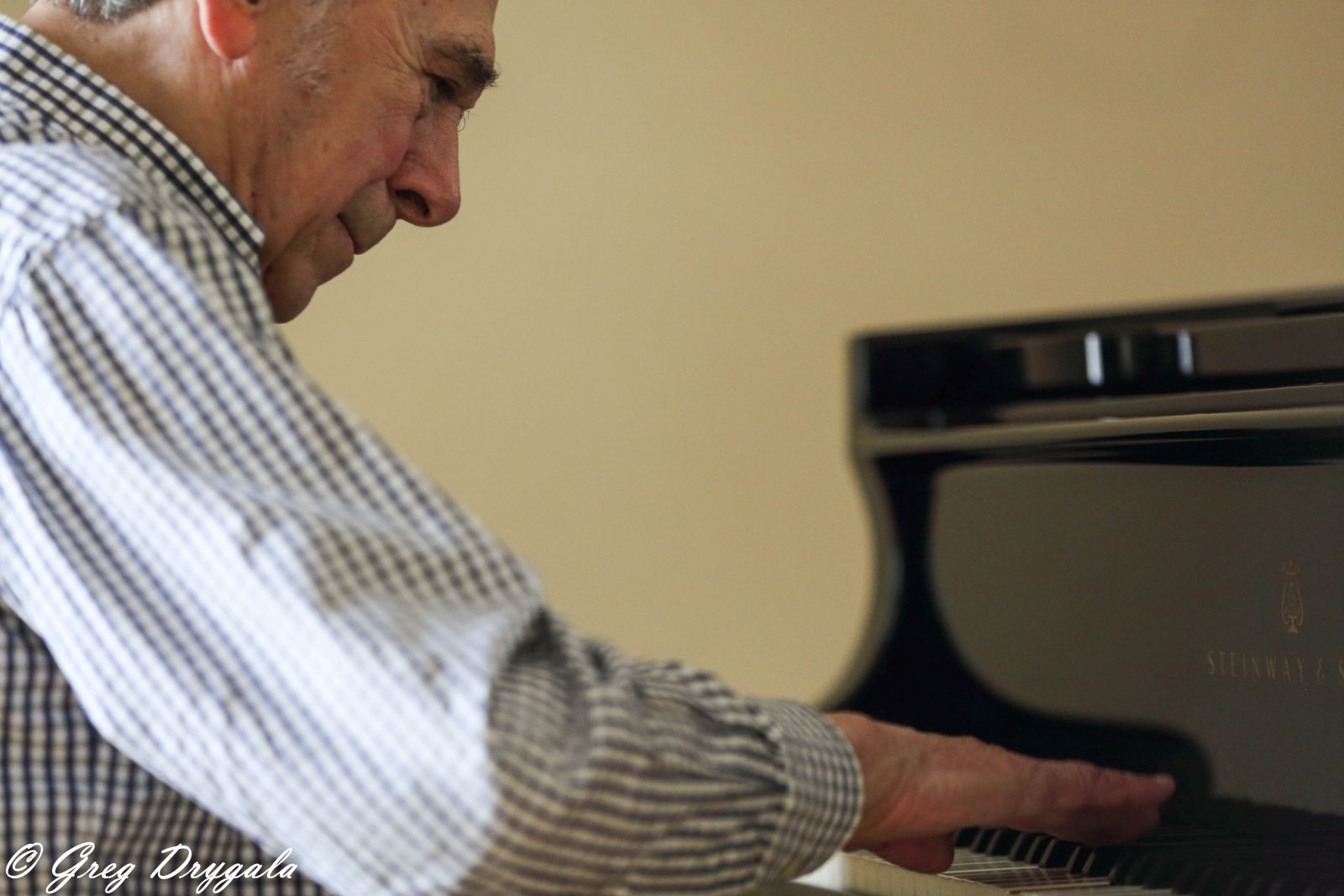 You cannot really get closer to the performer than coming to his soundcheck. Especially if this is going to be a piano solo recital. So, I did, together with bunch of faithful journalist friends. Rene is an excellent talk. He has been warming up and playing his program’s pieces, but he also had been attracted by our interest in him and his music so he really opened himself up for the conversation which he seemed to enjoy as much as we did. We had been talking a lot about the cool 50’s, Miles French Quintet and all this days they spend together. Memories started to come and had been easy shared once we dare to ask and noticed that we are also so honestly answered. No one even noticed when it came from the formal talk to sort of the off-record chat.

And then the magic just happened. We talked about music, Miles’ spleen and often changing moods. Connection they got and the adoration the musicians got for Miles lead and its musical personality. And these days he was a cool cat. They all were very elegant “sons of the bitches”, as Miles used to say. Then we came to the subject of Juliet Greco and Miles, and the love between them. For everyone who knows that music by heart it is obvious that it is nothing but the pure confesión de amor he did to her. Love was in the ether – they had been breathing with that, but to Miles it was something completely different. Never he could feel such a freedom and together with this feeling it brought a special affection to that improvised session.

It was not just him anyway. Rene in the same time fell deeply in love with Marriane, the young lady he met these days who was looking after that tour. To make a long story short they married and spent their whole life together. She gave him two daughters, one of which was there in the room. The real proof of that love is alive! I looked at her and she smiled. Pure magic. The touch of the history as its best. He said that his wife loves the blues. He composed special one for her, called simply “Blues for Marriane”, what else it could be? He played it for us and the love just blossomed out of that piano. Between the tracks he looked at Q-damm through the window of the French Institute and immediately shared his memory of the same view, back in 60’s, when the borders were closed and it wasn’t only thing sharing community, families, people. Berlin remembered well his own painful share of these days.

This meeting made me understand the man so much better. Now this music does not sound to me the same. It never will again. It is so much deeper, so much more touching. I can sense the feeling of love behind the noir sounds of suspect movie. Brilliant, btw and one of my favourites from Malo. So, little time together and so much came to the surface. I am so blessed with this moment. It doesn’t happen in life to often. One need to learn how to recognise it and enjoy full. 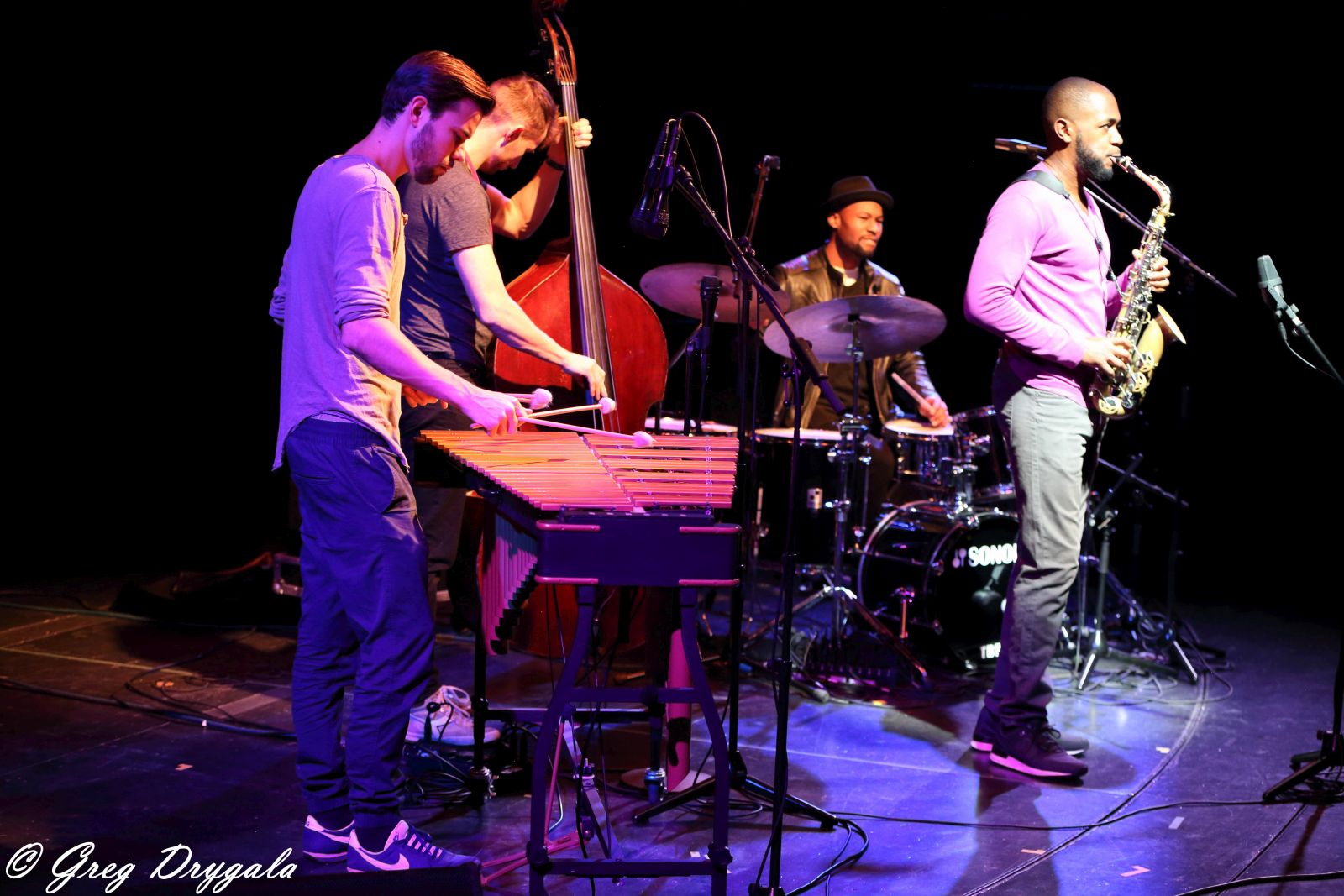 British Quartet was looking promising from the first sounds. On both soundcheck and set. Knowing them from the stages local to me I did expect to hear a good synergy in the group which I do remember from their performance in Brighton. Utterly different as it was there, with the string quartet arrangements and Arvo Pärt’s Tabula Rasa set. 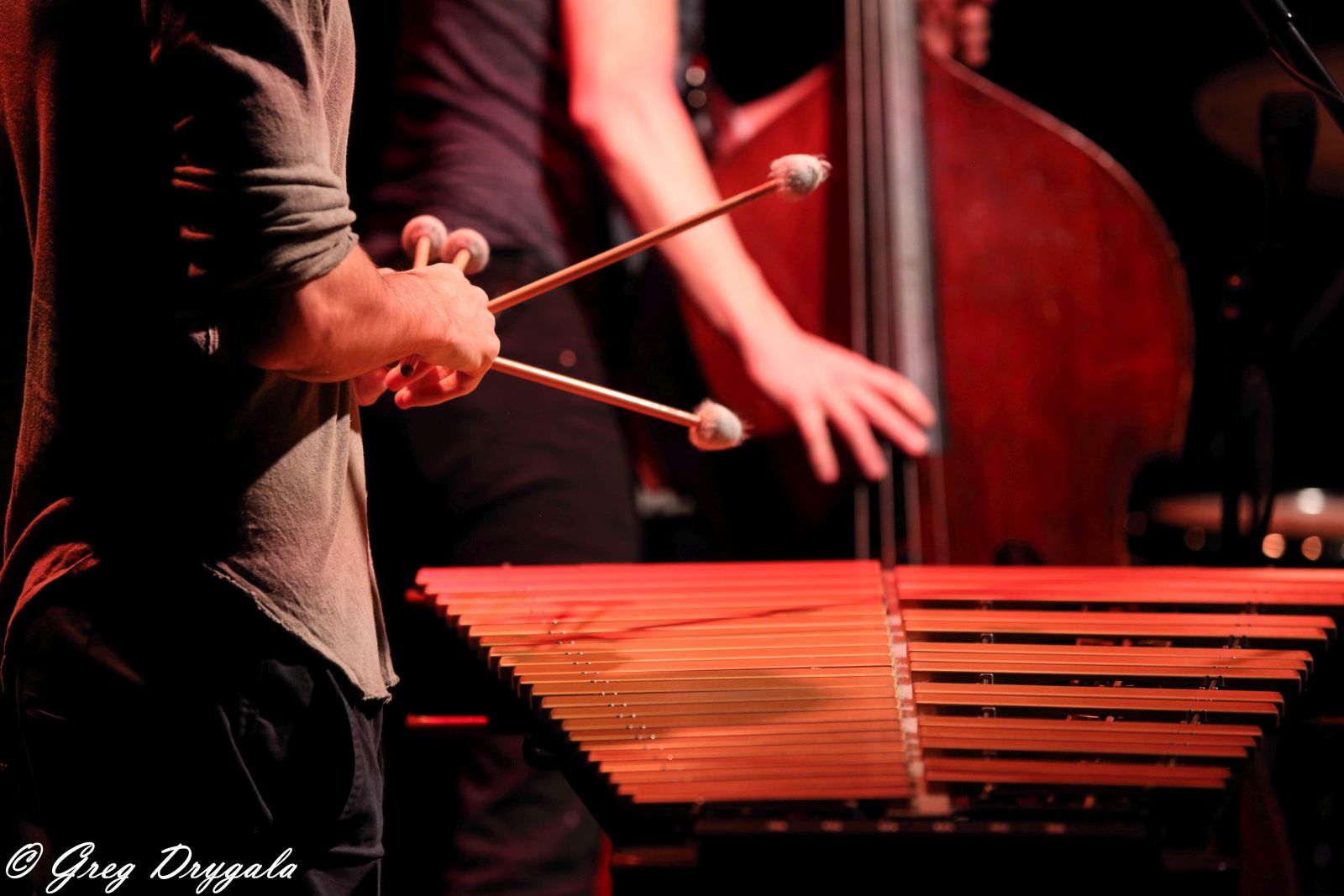 Here they had been playing their latest music and it was obvious from the first notes that those guys know each other very well and communicate brilliantly inside the band. Altoist Nathaniel Facey grown clearly to the mature band leader position and his numerous influences had been audibled in his play. Never boring, rhythmically challenging he was showing a whole palette of moods and tempos present in his and his play was always passionate. Vibraphonist Lewis Wright with his gentle touch and rhythmic and dance approach reminding a bit of Cal Tjader’s style, rooted in Bosa, was a perfect partner to counter point more spiritual saxophonist’s approach.

Rhythm section was vital and a fun to listen to and watch. Hardly the joy of making musing is so irresistibly visible behind the obvious craft.

Those who attended can call themselves lucky. I liked that set madly and will follow to trace the band’s paths. 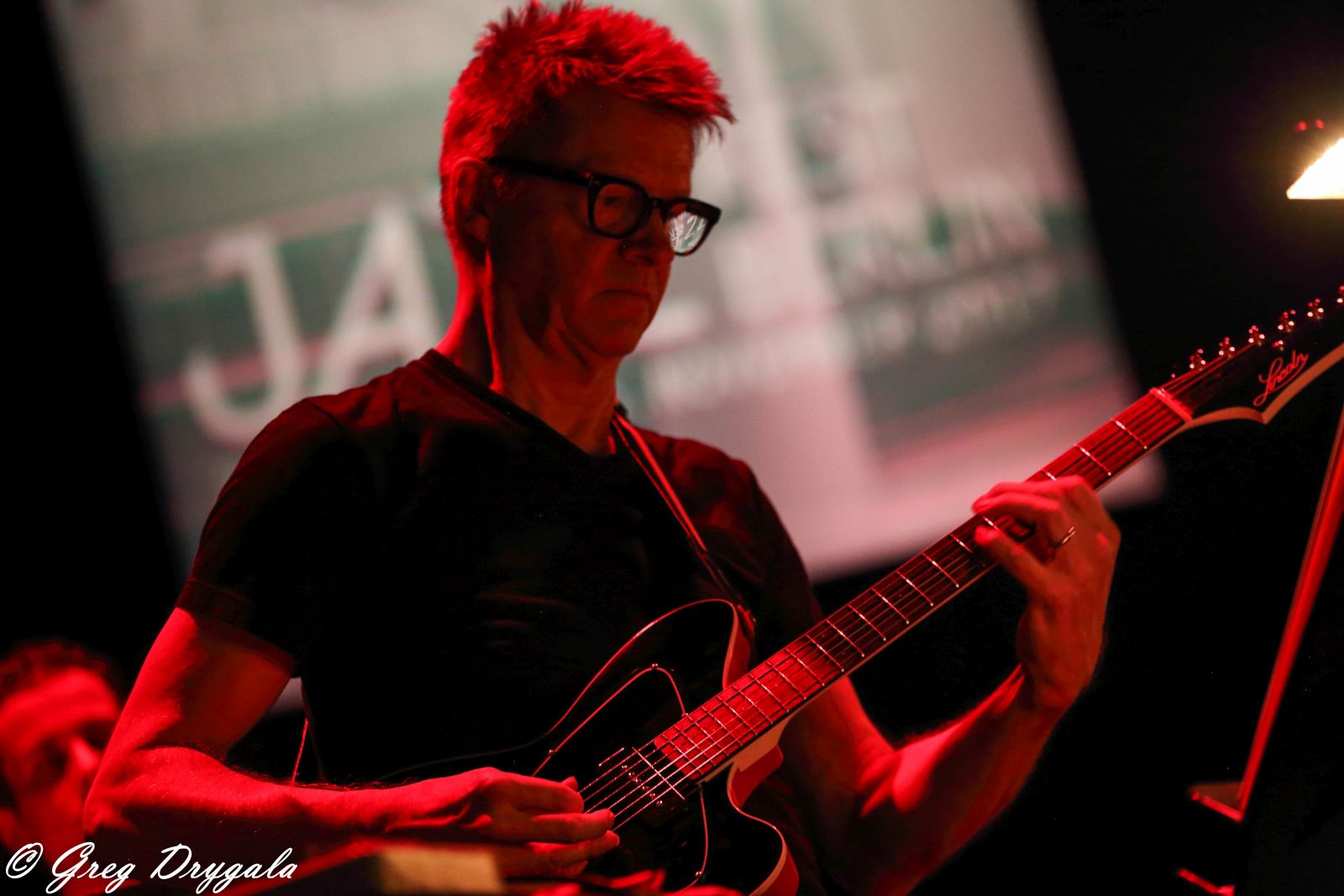 “Inspired to become a guitarist by hearing Jimi Hendrix’s “Manic Depression” as a teenager in Los Angeles, Nels Cline has been found playing jazz with Julius Hemphill, Charlie Haden, Vinny Golia and Wadada Leo Smith as well as alongside fellow guitarists Thurston Moore, Henry Kaiser and Elliott Sharp in various projects at the more experimental end of rock. In 2004 he joined the rock band Wilco, appearing on their last six albums. The “Lovers” project is one from the heart: “I have been dreaming about, planning and reworking my rather obsessive idea for more than 25 years,” he says. In Michael Leonhart’s tender, delicate arrangements for trio and chamber orchestra, a selection of ballads from the American Songbook merge with the compositions of Jimmy Giuffre, Gábor Szabó, Sonic Youth and Annette Peacock and several of Cline’s own pieces into an absorbing sonic reverie that reaches beyond time and category to discover a new kind of very modern beauty.”

I like Cline’s music a lot and even recently I reviewed this excellent album dedicated to Terje Rypdal’s music which he was a part of, but his latest dream doesn’t really appeal to me. I listened to the recording and dropped reviewing that as I simply could not find anything there touching me, except Nels playing solo or in trio as it is a case there from time to time and this is a good thing.

Following his numerous collaborations over the years I just couldn’t understand that wish for this recording. There is a reason why Leo Smith or Julius Hemphill didn’t play carols in the TV shows, isn’t it?

Here we hit almost such a reality. Some of the arrangements are so naïve and trivial  that they sounded almost like White Xmas to my ears. Lack of consistency when compared the band arrangements to guitar fragments is simply striking. Hardly any surprise I am leaving the set in the middle as that one was unbearable. However, I could see people enjoying it, so that’s good from the commercial point of view.

Let me put it this way to pay the justice to the artist. Every single note he played solo or trio was well worth the price of the ticket as well as the time. It was purely 10 minutes of joy to listen to that. It was even more striking by comparison to the earlier set, also orchestral, also featuring one of my favourite guitarists this day: Eivind Aarset. reviewed above. 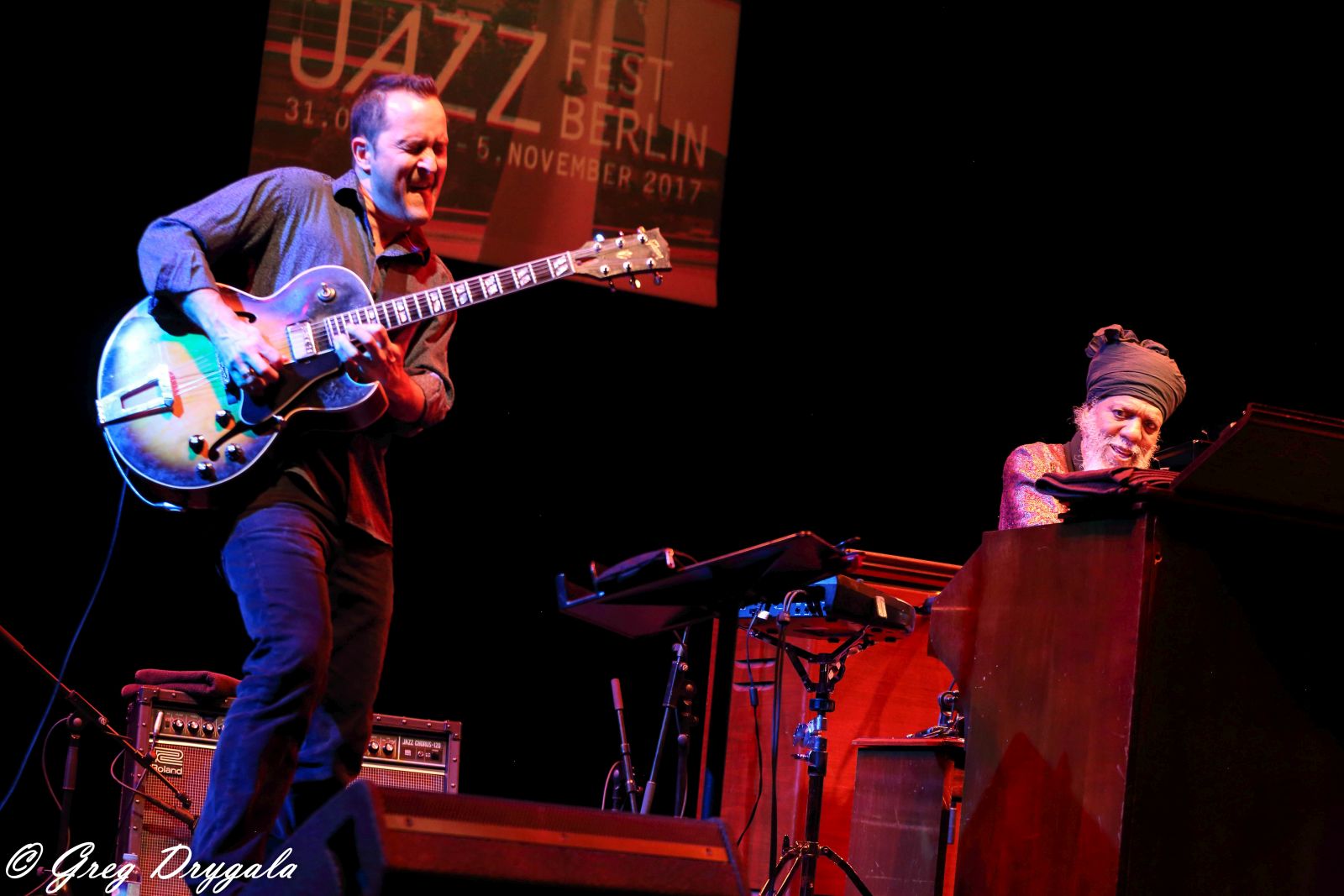 Doc you can always trust. When he hits his keyboard the heart just starts growing and it goes on and on and on. Long story short it wasn’t any different on that occasion. Given his age he remains active and vital and I didn’t notice any lack of vigour in his game either. Trio Doc brought was nothing but wonderful. 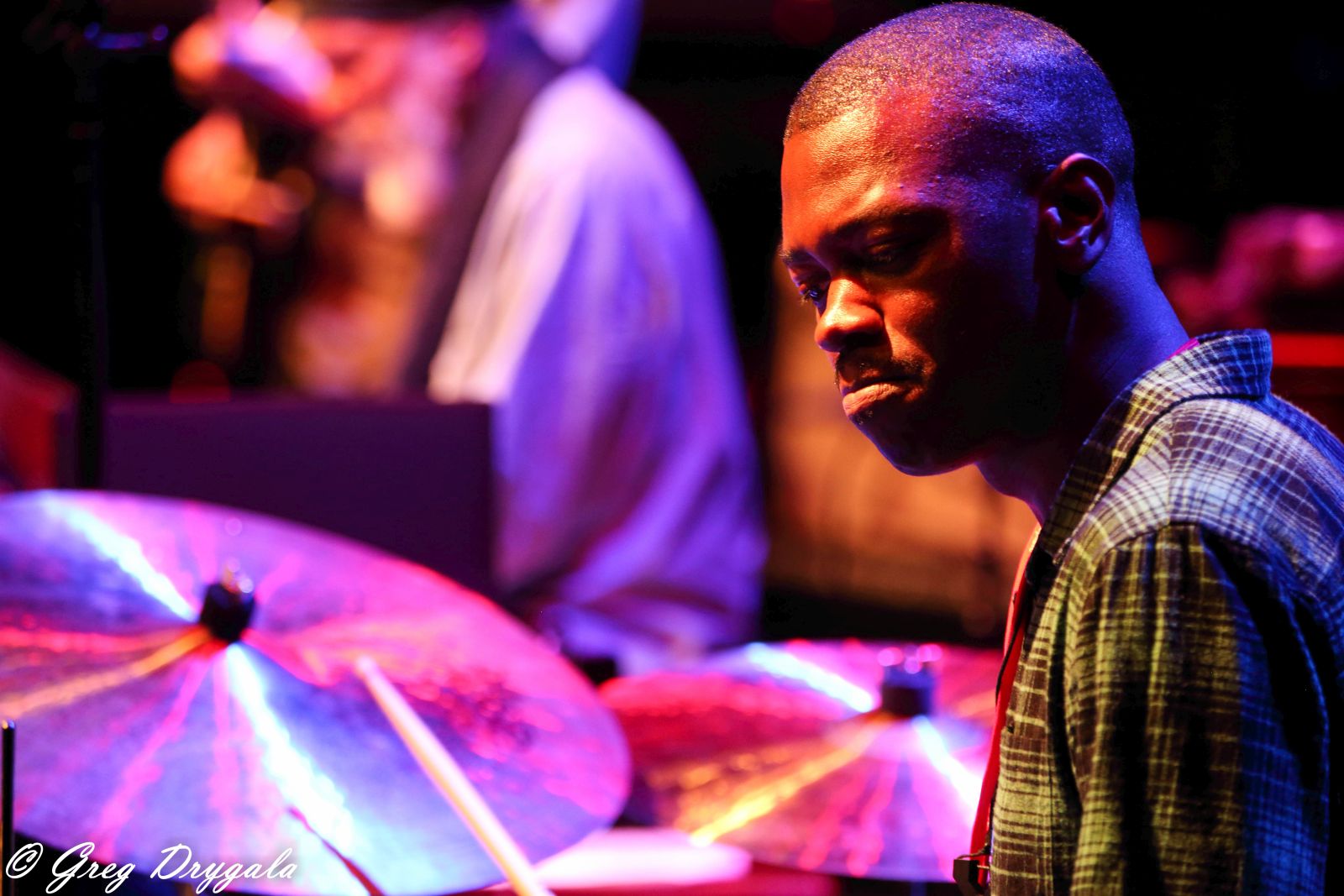 Young Drummer Xavier Breaker, who replaced trio’s regular- Jonathan Blake, was sparkling with enthusiasm and his drumming was wonderfully enhanced with the timing approach. Much more intuitive and immersive to me than Blake’s regular rock-solid rhythm keeping. That shows that the balance in trio can be quite moved as I noticed slightly more floating notes served from the Doc with that dish. His solo was simply joy for the ears with spacious and imaginative flight in the same time. Lot of space and rubato hits left floating to fade and decent dynamic range from piano to forte. 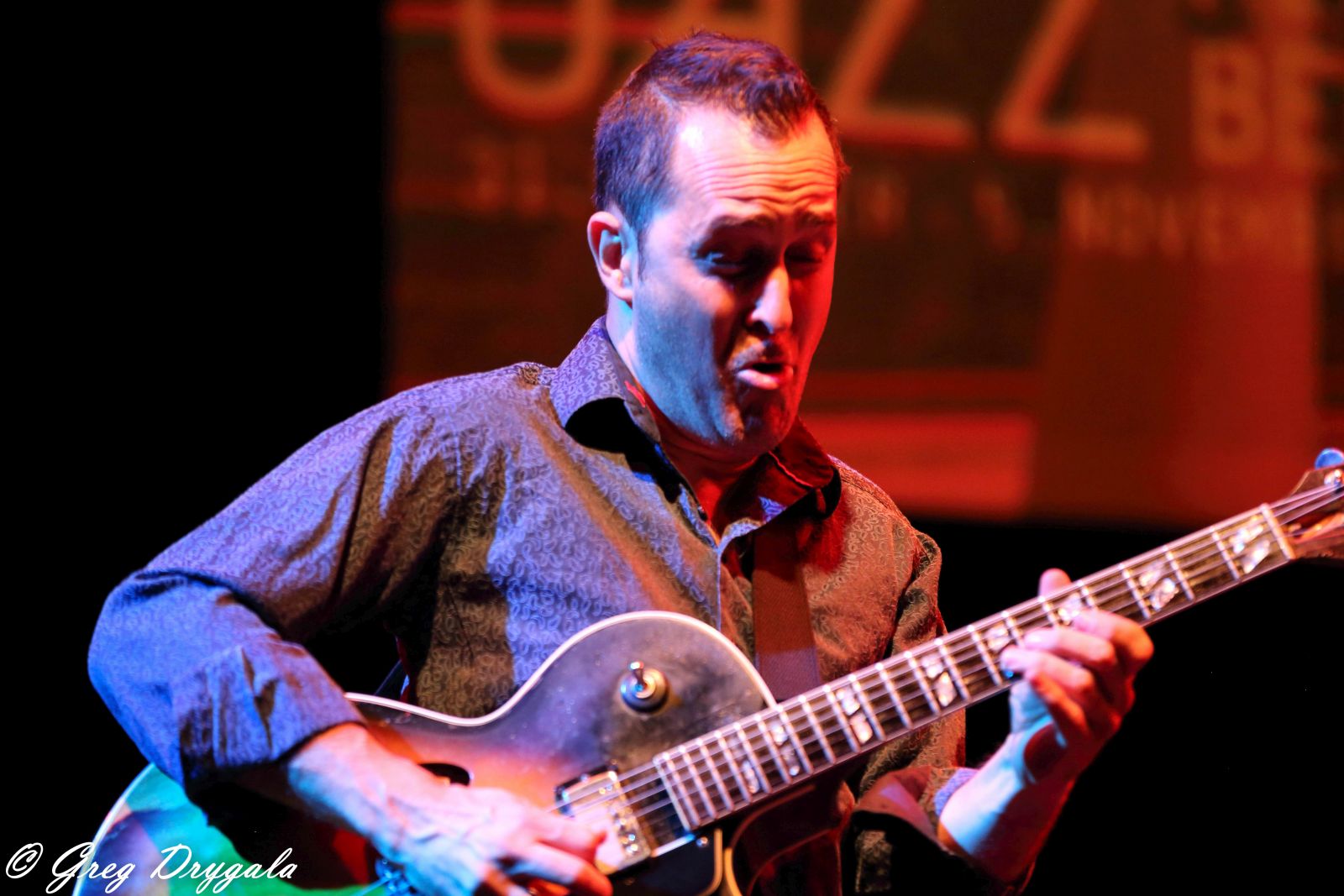 As per Jonathan Kreisberg he has been very himself for good. He always gives all he can to the audience and there was no difference that time too. More of all he loves playing with Smith. Waiving his phrases around his chops they are both always on the melody side, without losing this trebling funky traces in the background. That’s the skill which way both mastered in their game. 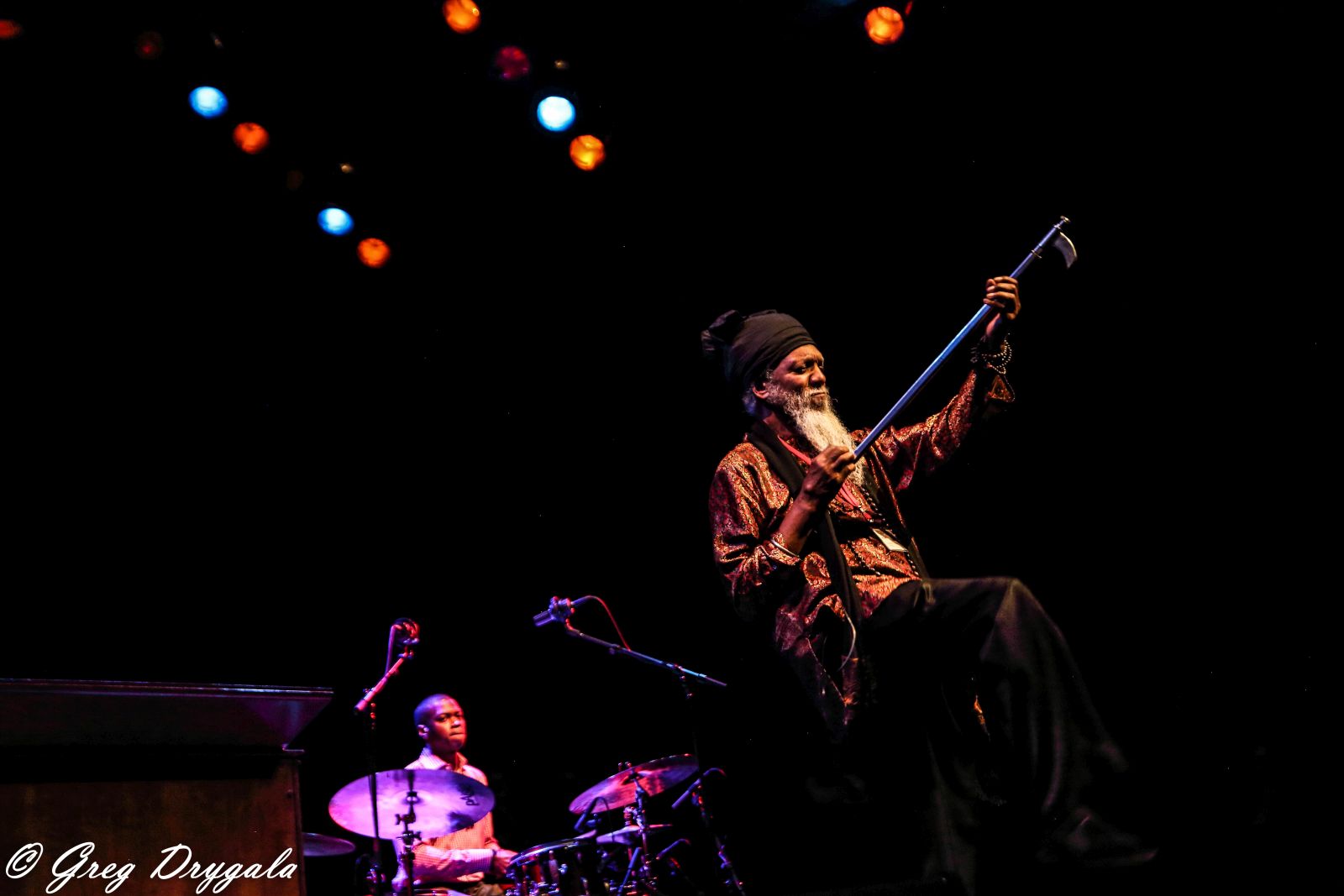 Repertoire was mostly on the funk side, with Doc’s gag involving playing his looking like walking stick bass instrument port-ably amplified, giving him a chance to rock and kick in vigorous duos with a guitar as well as fiery tuttis in trio. Set to remember, especially for me for whom it was the last performance during this festival, so even more pleased to leave so thrilled and smiling 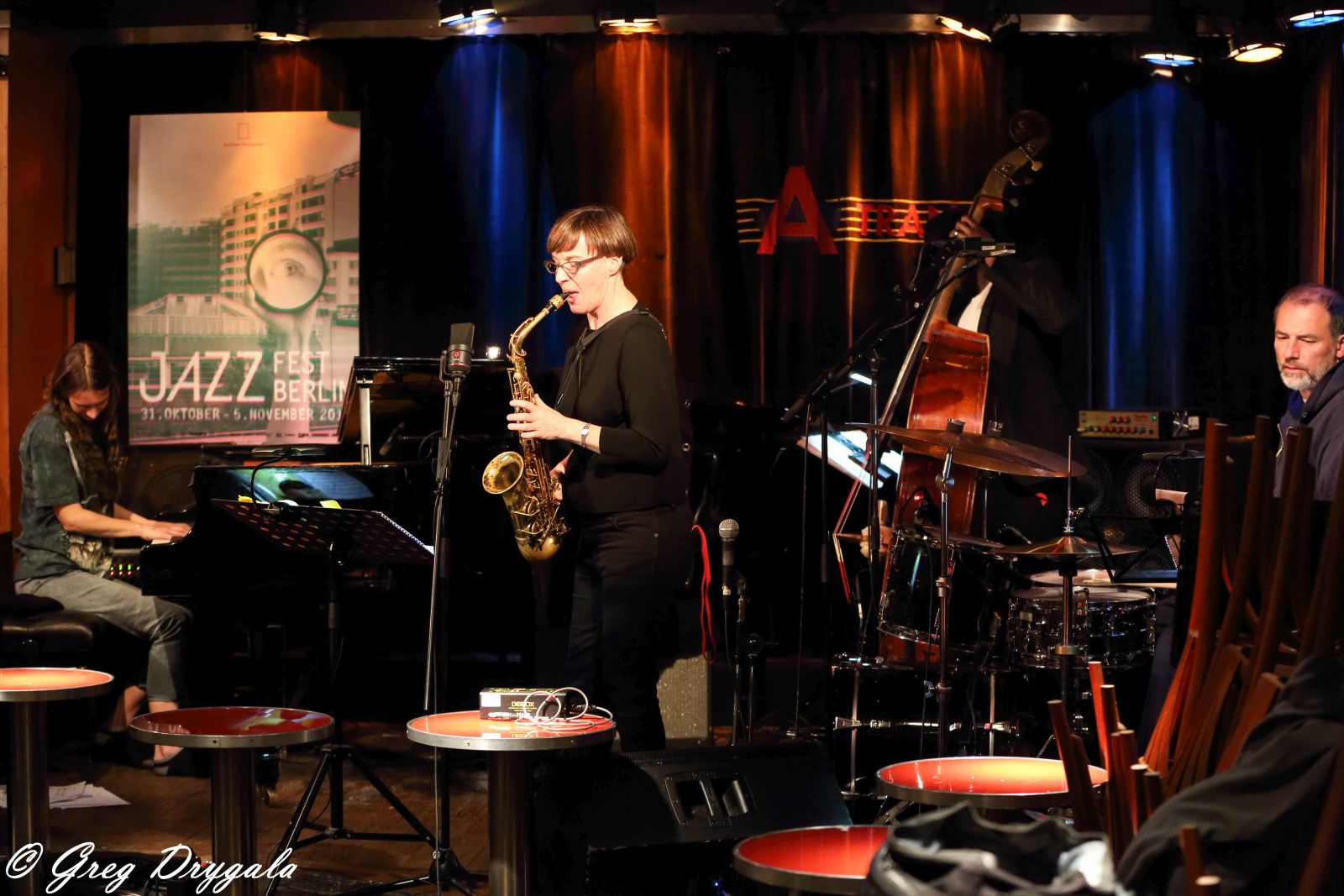 Short note I can make on Silke’s set taking place in A-Train. Set was overlapping with the main theatre ongoing things, so I only joined that one for the sound check, but knowing what to expect from Ms Eberhard and hearing what I did I can leave a few comments to sum things up.

This was pretty much sounding like a regular quartet under her command. With score list spanning between Monk, Dolphy and Mingus it was a good those of the classic solid jazz which under unquestionable Silke’s lead was all very well executed.

This is at least the music she is playing on the regular basis and studied deeply over the years to explore from it everything she could. Therefor it was no surprise that she led the band with a firm hand. As the section was following her with no problem and supplied the rhythm carpet on demand it all went smooth.

The only loss there a little bit was a pianist Sarah Tandy. But she managed to stay safe and unless you paid an attention to that you wouldn’t noticed. I think that Silke looked after that when was giving space to the musicians to shine and as a good leader gave each exactly as much as he/she needed to show its best.