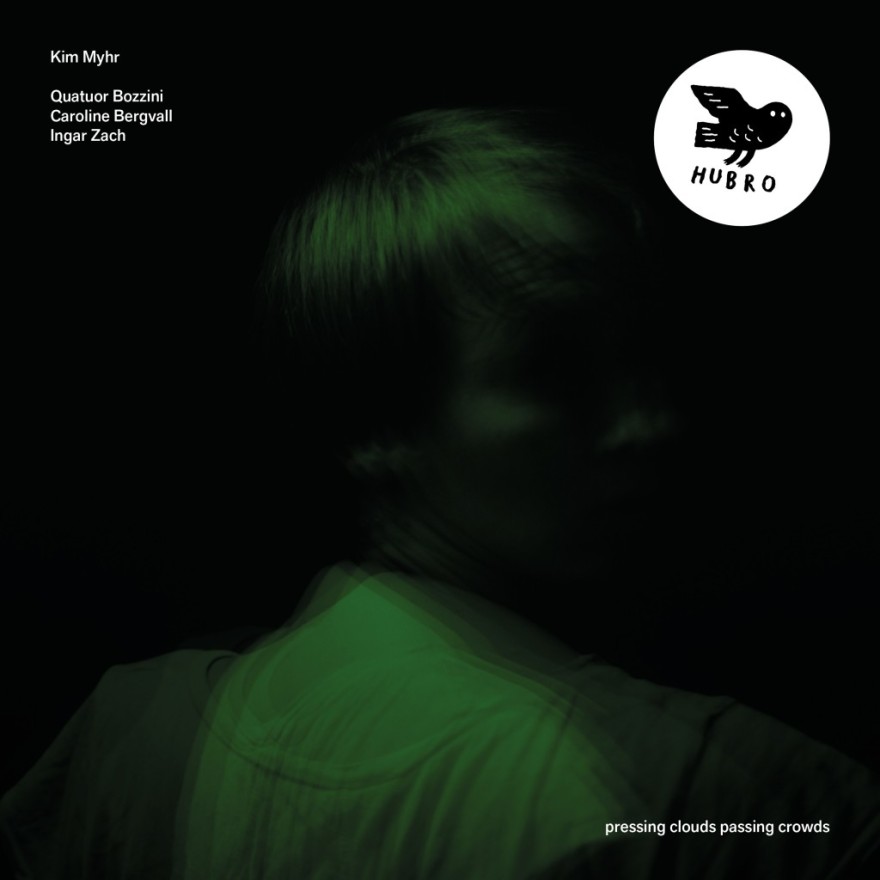 The guitarist, composer and performer Kim Myhr, whose previous Hubro release, ‘You | me’, received the accolade of a shortlist nomination for the prestigious Nordic Music Prize, composed the extraordinary music and text piece ‘pressing clouds passing crowds’ as a commission for the 2016 FIMAV-festival (Festival International de Musique Actuelle de Victoriaville) in Quebec, Canada. It features Myhr on 12-string acoustic guitar alongside an expanded version of the celebrated Montreal-based string quartet Quatour Bozzini with percussionist Ingar Zach (Huntsville, Dans les Arbres) and the voice of the poet Caroline Bergvall, reading her own text.

“Inspired by meeting poet Caroline Bergvall in 2015 and the music of Robert Ashley that I was listening to at the time, I was wanting to make a longer, slow-moving piece centered around a speaking voice”, says Myhr. “The composition is in six parts, but the parts all blend into each other so that they feel like one slowly changing state of mind.” The result is a triumphant achievement where music and text appear inextricably bound up with each other, with Bergvall’s hypnotic voice and incantatory delivery acting at times like an additional musical instrument, while the string quartet’s stabs, drones and glissando slides provide emphatic punctuation and rich musical counterpoint to the evolving story, which is itself a complex layering of sound and sense, discourse and narrative.

Unusually, neither music nor text appears to have have the upper hand. While either could be appreciated on its own, to be read or listened to as self-sufficient entities, they seem to work symbiotically, one medium echoing the other as first words, then music initiates a fresh departure into a new movement. But ‘pressing clouds passing crowds’ is not a ‘setting’ of Bergvall’s words. “I had in fact composed all the parts to the music before any text was written”, Kim Myhr says. “Although I did have the sound of Caroline’s voice, which can be both brutal and empathetic at the same time, in my head while I made the music. After a few days conversing together in London, Caroline wrote words relating to the general character of the music and our conversations around it. : something suspended in air, personal yet universal, a sort of sensual confusion of the subjective and the objective.”

Despite the music coming first, as it were, it somehow seems to share the overall theme of transformation through creating a series of distinct but related musical identities for each of the six movements, while at a macro level the whole piece continually evolves to become a musical analogue of transformation itself. Compositionally, Myhr’s music can suggest the meditative intensity of Morton Feldman mixed with hard-edged Reichian minimalism – ‘Different Trains’ meets ‘Electric Counterpoint’, say – and a softer, south Asian-influenced lyricism. while The glue that binds it all together comes from Ingar Zach’s absolutely vital role as the group’s percussionist, moving ceaselessly from one instrument to another as he bridges the gaps between movements and narrows the tonal distance between voice, guitar and strings. “I wanted to take this delicate harmonic language I’ve developed on the 12-string guitar, which I’m at least partly indebted to Morton Feldman for, and bring it into a very warm, intimate sphere”, says Myhr. “The guitar itself helps create this intimacy, as it’s a domestic and intimate instrument that people often play in their own house, including their own bedroom. I think Caroline’s voice and words further emphasize this aspect. The listener is brought into the dreamy intimate world of the narrator, gently and floatingly shifting from one state of mind to another.”

In terms of subject-matter and context, Caroline Bergvall’s theme of transformation could not be more contemporary, although there is no easy, one-dimensional interpretation. Rather, Bergvall’s poetic method links the personal to the political and the universal, and the world of natural phenomena to social issues and processes, through pin-sharp images and metaphors that move from a train journey in search of a beach, to the outer limits of the solar system. Transformation here becomes multi-valenced, from gender identity and sexuality to migration from one nation state, culture or language group to another, partly paralleling Bergvall’s own experience of ‘belonging’. Half Norwegian and half French, born in Hamburg (in 1961), resident in the UK for decades yet with an international profile as a poet, academic and artist operating across normally separate disciplines of literature, visual art and performance, Bergvall (whose 2014 collection ‘Drift’ drew upon the Old English text ‘The Seafarer’ in reimagining the ordeal of mediterranean refugees crossing to Europe) places herself both inside and outside her developing narrative, as if part participant and part observer.

She also uses her voice to great dramatic effect, at times singing the words to create a ritualised chant, hymning “those who risked it all to cross”, or creating a vocal equivalent of concrete poetry. Accompanied by (or accompanying, for the distinction is never clear), the intense rhythmic repetitions and wild swirling strings of Kim Myhr’s music, the effect of ‘pressing clouds passing crowds’ is immensely powerful, building movement by movement into a suitably climactic conclusion.