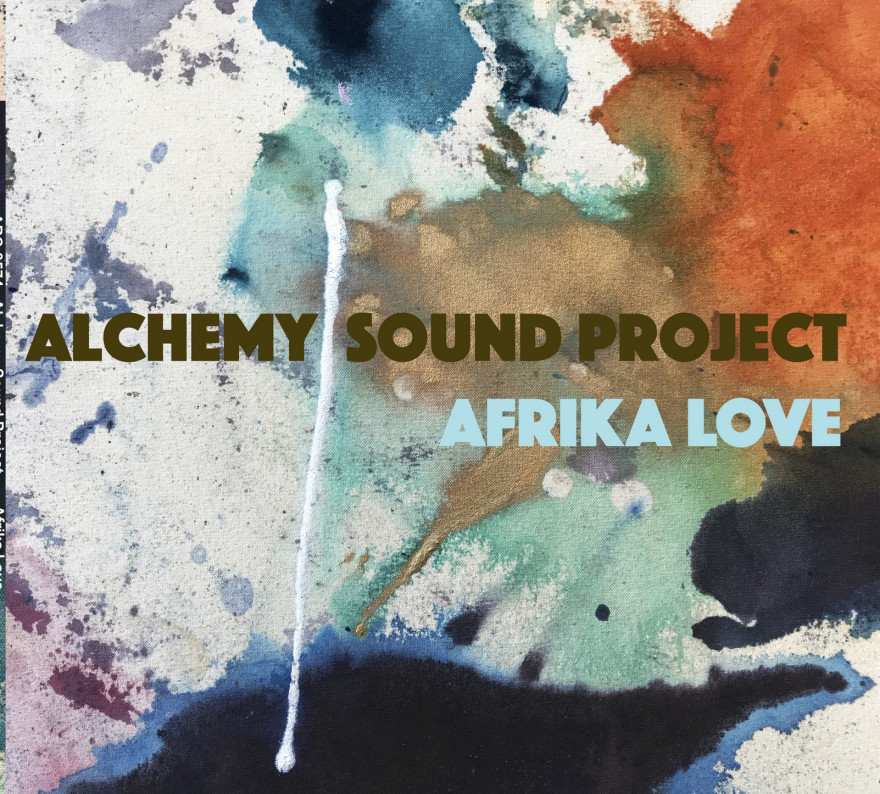 “…five compelling and gifted musicians, each with their own unique and powerful creative vision… their multi-gendered, multi-racial makeup as a group offers a positive example of cooperative humanity.”   – Dee Dee McNeil, Musical Memoirs

★ ★ ★ ★  “…a mesmerizing combination of chamber jazz, symphonic music, modern jazz and big band. You might even hear strains of Charles Mingus in this aurally delicious mix.” – Bob Protzman, DownBeat Magazine

Alchemy is defined as “a seemingly magical process of transformation, creation, or combination” (Oxford English Dictionary). It’s hard to imagine a word that more aptly suits Alchemy Sound Project, a collective in which five esteemed composers and bandleaders — pianist Sumi Tonooka, woodwind players Salim Washington and Erica Lindsay, trumpeter Samantha Boshnack, and bassist David Arend — form a potent ensemble greater than the sum of its parts. A synergy that seems almost supernatural, especially given the far- flung home bases from which these artists converge, is evident throughout Afrika Love, the band’s third album, due May 14, 2021 via Artists Recording Collective.

Alchemy Sound Project formed in 2014, two years after the group’s members met in Los Angeles at the Jazz Composers Orchestra Institute, where, over the course of a week, they learned to utilize Western classical music concepts and orchestration techniques. “We were five friends and colleagues who had all these similar connections,” Tonooka recalls, “and I wanted us to be able to extend what we do together musically, instead of leaning on other projects or other commissions — to set up our own small chamber group to play and record.” What resulted is a diverse, eclectic group that makes powerful, original music meant to blur the boundaries between notated composition and improvisation.

Sessions for Afrika Love took place in January 2018 in Conshohocken, PA. But the album’s title, borrowed from the composition that Washington contributed to the album, reflects the band’s keen awareness that this recording arrives in the wake of one of the most tumultuous years in recent U.S. history — a pivotal period in which race relations and social justice protests have taken center stage.

According to Tonooka, the band found the title “appropriate in terms of what’s happened with the Black Lives Matter movement, and with what the country still has to deal with in terms of conversations about racism and the aftermath of slavery, and the fact that we still haven’t gotten it together to really heal, because no one seems to talk about it in a way that is healing.” Seen in that light, the multi-gendered, multi-racial makeup of Alchemy Sound Project in itself offers an understated, buoyantly positive example of cooperation and mutual regard.

Given that each Alchemy member is so distinguished individually, it’s no surprise that their collective effort shines. Tonooka, who presently makes her home in Philadelphia, was a 2020 Painted Bride Composer Grant recipient, a 2019 Chamber Music America New Jazz Works Grant winner, and a 2018 Philadelphia Jazz Legacy awardee, among other accolades. Seattle resident Boshnack issued a debut album with her band, Seismic Belt, in 2019, and led the group in appearances at Winter Jazzfest, the Festival of New Trumpet Music, and Seattle’s Earshot Jazz Festival.

Arend settled in Los Angeles in 2018, just in time to see local screenings of Changyou’s Journey, a short film for which he served as composer and co-producer. After making his debut as acting principal bassist of the Los Angeles Chamber Orchestra, he completed his first major orchestral score. Lindsay, based in upstate New York, is an artist-in-residence at Bard College, teaching jazz composition and arranging as well as leading a contemporary-music ensemble, and in 2019 she was an artist-in-residence at Philadelphia’s Kimmel Center. Washington, based in Durban, South Africa, leads a busy performance career with several respected groups — the newest, a quartet he leads jointly with piano prodigy Afrika Mkhize, in whose honor Washington penned the album’s title track.

Completing the lineup on Afrika Love are two versatile colleagues, trombonist Michael Ventoso a student of Lindsay’s who plays in both classical and jazz settings, and drummer Chad Taylor, a dynamic solo artist and bandleader, and co-founder of the renowned Chicago Underground Duo. The group elected Arend, a seasoned studio hand, to produce the album, which showcases one original composition by each member. 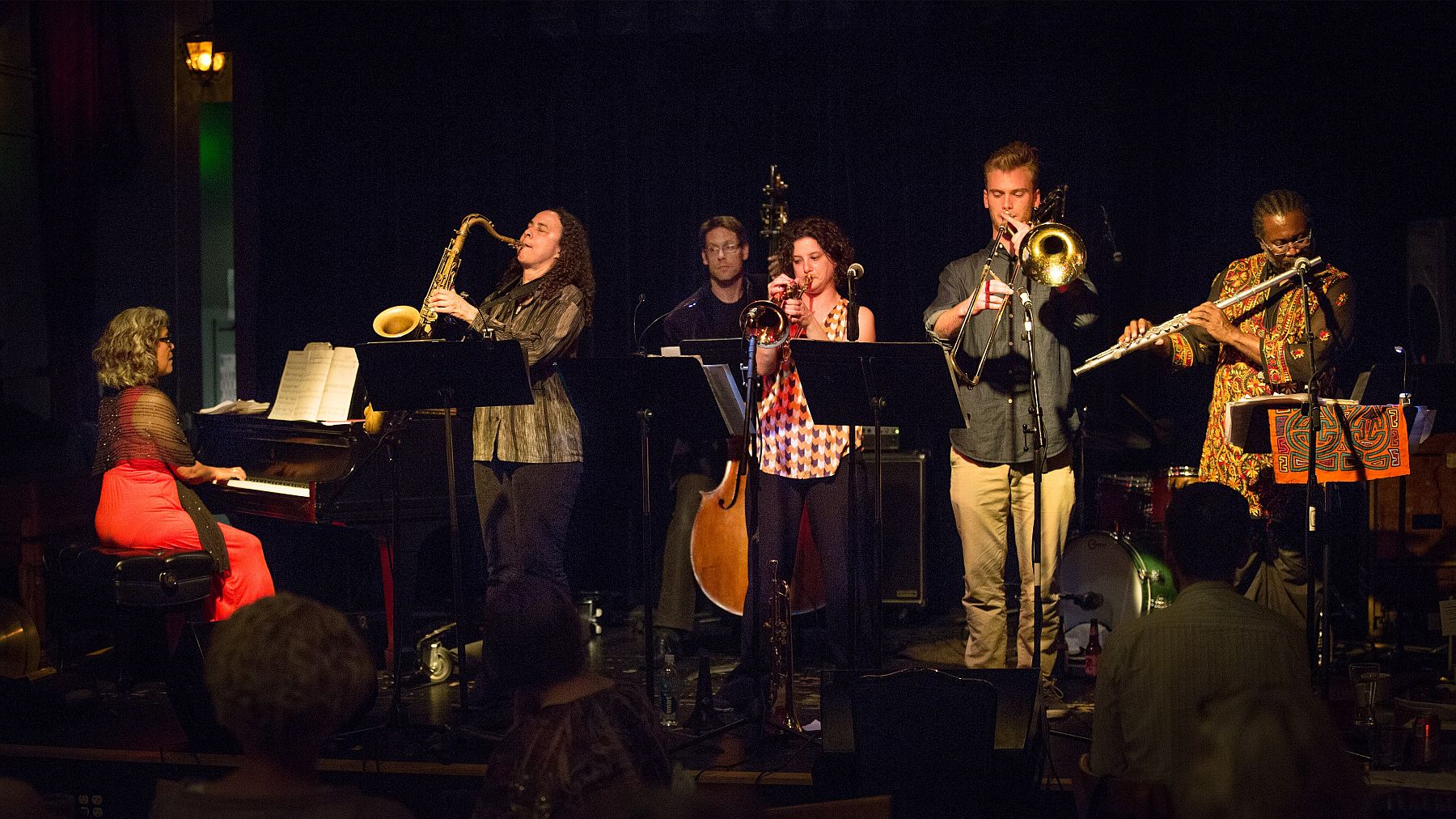 “The title says it all,” Arend says of “The Fountain,” which opens the album. “I was inspired to depict in music the imagery of a huge fountain of water, both the larger scale of gushing energies as well as the smaller scale of individual water droplets. Tightly organized at the beginning and end, the piece contains a central section that is pure free improvisation.” On this track, the musicians’ cohesive free play is book-ended by curve-hugging tightness at the start and finish.

Tonooka says that in writing “Dark Blue Residue,” she was thinking about the aftermath of any experience that brings people together. “A relationship, it could be a group, it could be any social type of situation — the quality of what’s left behind is a sort of residue. People move on, people move forward, but there’s a residue that’s left. And dark blue has to do with the bitter-sweetness of that, when you’re left to reflect on what you have, and what you’ve done.” Throughout the piece, Arend slips seamlessly from classical arco playing with and among the winds and horns to a woody pizzicato throb beneath, lending nuance and dimension.

“Afrika Love” is Washington’s tribute to his South African compatriot, pianist Afrika Mkhize, son of renowned pianist-composer Themba Mkhize. “One day he called me up out of the blue, simply to say, ‘I love you,’” Washington relates. During their conversation, Mkhize talked about a distinctive pitch system native to Zulu musical tradition. “I began experimenting with this system, and decided to write a composition with it,” Washington says. An unaccompanied horn establishes the tone dramatically from the start, and the composer’s oboe soliloquy is a highlight of this rich, original conception.

“The Cadillac of Mountains” is about feeling awestruck in the face of nature’s grandeur, says Boshnack. “As a hiking enthusiast living in the dramatic environs of the Pacific Northwest, this composition conveys the inspiration I feel when enjoying the overwhelming beauty in the outside world.” The composer’s sky-scraping trumpet lines evoke heavenly expanses, which Washington’s plummy bass clarinet counters with elemental earthiness. Lindsay’s tenor sax solo conveys the composer’s passionate vision, while a contrasting section anchored by Tonooka and Arend evokes nature’s tendency toward unpredictable shifts. And not to be overlooked is Chad Taylor’s subtle and varied accompaniment.

A different sort of marvel animates “Kesii,” Lindsay’s sly, earthy closer. “I named this piece after a friend of mine who passed away this year at the age of 107,” she says. “The journey of life and the path it takes us on holds so much wonder and unexpected gifts.” The piece, she explains, is meant to evoke all the twists and turns a life can hold with a constantly changing series of moods, tones, and colors. “I took a 5/4 repeating clarinet phrase as a starting point, and let the music tell its own story,” Lindsay notes.

Each of these five compositions tells a story worth hearing. Together, they serve to remind the listener that, for all of its unanimity of spirit and intent, Alchemy Sound Project showcases five compelling individuals, each with their own powerful creative vision. The genuine magic in the band’s work is that artists so individually strong and distinctive can fold themselves into one another’s visions so completely and sympathetically. The result is alchemy at its finest.