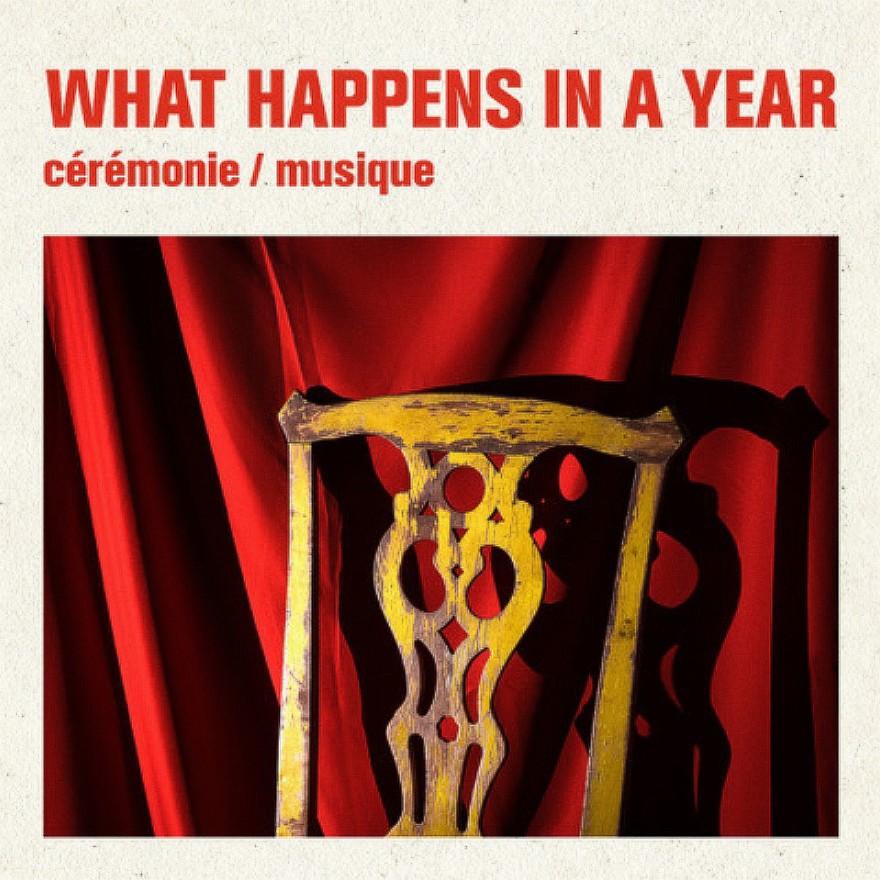 cérémonie/musique is the utterly unique expression of idiosyncratic multi-instrumentalist, composer and audio conceptualist Josh Sinton and his collaborative trio What Happens in a Year featuring Sinton on baritone saxophone and bass clarinet, guitarist Todd Neufeld, and electric bassist Giacomo Merega. The band’s debut recording represents a seemingly radical but absolutely organic “next-step” in Sinton’s artistic development. , cérémonie/musique is a daringly spacious and crepuscular album filled with coherent improvisations reflective of the trio’s longstanding musical relationship. The recording is also the inaugural release of Sinton’s new record label FiP, an acronym for “form is possibility.”

The conceptual idea behind Sinton’s trio involved of making music that was a.) quiet, b.) spacious and c.) executed at fast tempos. “Originally, my thought was to get the three of us together to improvise and record it. Then I’d go home with the field recording and turn it into compositions,” says Sinton. After their very first meeting, it was clear that the spontaneous improvisations, with their mysterious, enticing musical expression, made formal, pre-written compositions superfluous. After several years of investigative playing, the trio entered Oktaven Studio and, with the help of engineers Ryan Streber and Luis Bacque, produced a document of lushly alternating textures. Phrases begin and end with musical ellipsis, one player poses an obscure question while the next answers with a terse rhyme, and it all melts away into an enigmatical mist.

In addition to being the debut album of What Happens in a Year, and the inaugural release for FiP Records, cérémonie/musique marks a first for Sinton in other ways. “I’ve always viewed composition and improvisation as nearly identical creative activities, although the results of each can often be confused. Given the vast quantity of free-form-based recordings, there’s no question that it is a musical category with a history, a context and recognizable styles. I just assumed that when I started my musical training, that making a recording of free-form improvisations was as valid and unsurprising as an album of my own compositions, or a recording of Steve Lacy’s music, or an interpretation of David Lang’s ‘press release.’”

“ Yet, I’ve never recorded a group that only executed free-form improvisations. The closest I came was my album anomonous with Denman Maroney and Ben Miller, but that was made for a friend’s short film, so even that had an extra-musical impetus. Here it’s just the three of us getting together and ‘starting from zero,’ so to speak.”

The results are a clear focalization on implications generated by Sinton’s earlier work. From the hushed ethereality of ‘algernon’ to the rapid mumblings of ‘sleepwalk digest’ to the disturbing lilt of ‘untethered,’ the music of What Happens in a Year once again displays Sinton’s interest in dynamics, pulse and a broad intervallic language.

The title of the album came from guitarist Todd Neufeld when he thought about, “three guys slogging out through these days of teaching, work, fatherhood, marriage and having this kind of musical ceremony when they met each week to make new music.” According to bassist Merega, “A ceremony is a ritual and if I didn’t have rituals, I’d be like a chihuahua in a jungle, I wouldn’t last a day. Among those rituals are making espresso, having breakfast with my daughter, and improvising with Todd and Josh.”

Josh Sinton is an award-winning baritone saxophonist, bass clarinetist, flutist and composer. He was named “Rising Star” in the baritone saxophone category of Downbeat’s 2020 Critics’ Poll. He has been the leader of numerous groups including Predicate Trio, musicianer and Ideal Bread and has been an important voice in the decades-long creative music renaissance of Brooklyn, New York. He has worked with artists including Anthony Braxton, Tom Rainey, Nate Wooley, Ingrid Laubrock, Roswell Rudd, Kip Hanrahan, Darcy James Argue and Andrew D’Angelo.

Italian virtuoso bass guitarist, improviser and composer Giacomo Merega has been an original figure in the New York improv/new music scene for over a decade. Giacomo’s recordings as a leader and/or sideman have been written about and aired on radio stations in a dozen countries and have won critical awards in the US, Italy, France and Canada. His work has been released by Hat Hut, Not Two, American Clave, Underwolf and Rudi Records and he has performed with acclaimed musicians such as Joe Morris, Anthony Coleman, Steve Swallow, Kip Hanrahan, Nate Wooley, Tyshawn Sorey, David Tronzo, Brandon Ross, Satoshi Takeishi, Dana Colley, Noah Kaplan and Mat Maneri among many others.

This album marks the first release on Josh Sinton’s Form is Possibility Recordings (FiP), an outlet exclusively devoted to recordings of his work. “I’m starting a label in order to sidestep the ever-present challenge of getting someone else interested enough in my work to put their imprimatur on it. I like my records and I would like to give other folks the opportunity to give my voice and my art a listen.” Releases will arrive approximately once a year and will come in the form of digital download and limited runs of physical media (for now compact disc) with original cover art by TJ Huff. They will be well-recorded, multi-sectioned, carefully considered works of sonic art that document Sinton’s ever-growing body of heterogenous and self-generated- idiomatic work. “These albums will be more like a self-contained book or movie in that they will dictate their own rules of engagement. Their one unifying factor will be my presence.”