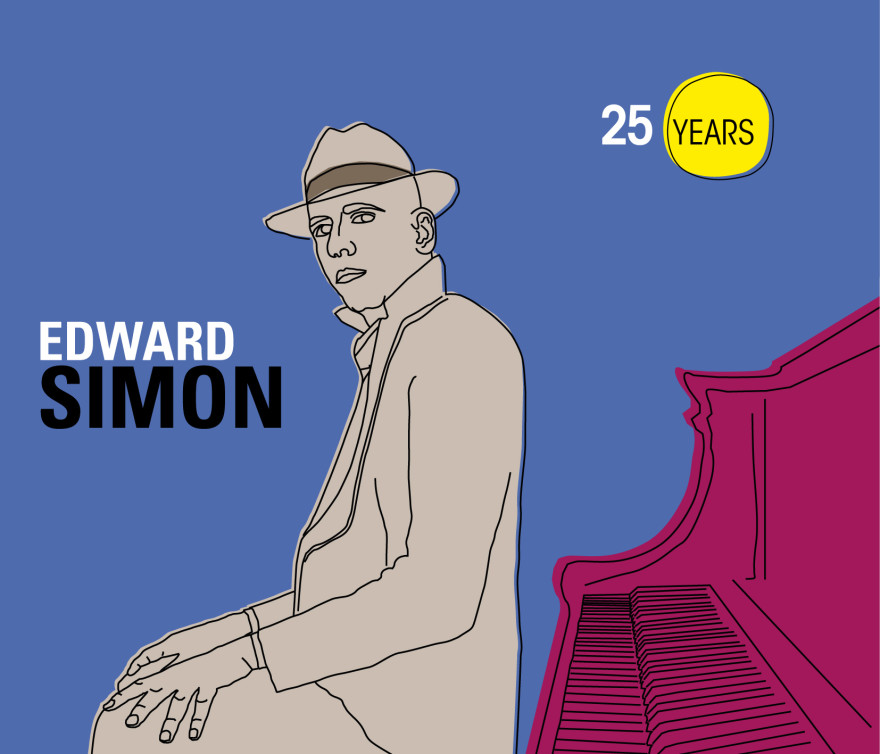 4 stars: “In a musical journey that spans the titular 25 Years, Simon has crafted a lot of music, employing a Latin/jazz/classical approach with a seemingly effortless refinement, making sounds that are unfailingly engaging and beautiful.” – Dan McClenaghan, All About Jazz

“One of the strongest pianists of his generation, with intuitive empathy and drum-like ingenuity, and solos compositionally with passionate elegance.” — Ted Panken, DownBeat

As birthdays go, 50 is a big one. Even people generally unfazed by the passage of time pause for a moment to get their bearings at middle age’s undeniable onset. For Edward Simon, reaching the half-century milestone provided a welcome occasion to take stock of a deeply consequent career that has quietly expanded the frontiers where jazz seamlessly converges with Latin American rhythms and European classical forms and devices. Acclaimed as a pianist, composer, arranger, educator and bandleader, the Venezuelan-born, San Francisco Bay Area-based Simon has been at the forefront of the movement that has greatly expanded jazz’s already extensive ties to Latin American music. His new album 25 Yearsis less a career retrospective than a personally curated tour through some of his highlights as a recording artist.

Brimming with arrestingly beautiful music drawn from 13 albums spanning 1995-2018, it’s a wide-spectrum look at a well-known artist whose music should be circulating much more widely. The album reflects Simon’s recently forged role as associate artistic director of the Bay Area nonprofit Ridgeway Arts, an arts organization, label and presenter founded and run by Jeff Denson, the bassist, composer and California Jazz Conservatory’s dean of instruction.

Rather than inducing angst in Simon, reaching 50 last year inspired him to step back and examine the creative path he’s been following. “I felt like it was time to do some reflecting on my work,” Simon says. “And I realized that a lot of great music went largely unnoticed. It was released on indie labels with no publicity, or small European labels with no presence in the U.S. I wanted to get these recordings back on the radar and into listeners’ ears. I wanted to re-present it in a celebratory spirit.”

Simon didn’t set out to compile a comprehensive portrait of his career. There are no examples of his formative sideman work with Bobby Watson, Terrence Blanchard or Greg Osby, and some of the music he recorded as a leader couldn’t be included. But 25 Years vividly captures a restlessly creative artist wrestling with his influences, honing his voice, and finding an utterly personal synthesis of Pan-American styles. Simon selected all the tracks and decided on the sequencing without paying too much attention to chronology, though the first disc focuses more on what award-winning jazz journalist Ted Panken describes in his incisive liner notes as Simon’s “early-career masterworks of jazz polylingualism.”

He hears his younger self and his freewheeling bandmates as eager to plunge into uncharted territory, unburdened by self-imposed expectations. “There’s a sense of a certain kind of freedom, and at the same time there’s a rawness in those early recordings,” says Simon, a founding faculty member in the San Francisco Conservatory of Music’s Roots, Jazz and American Music program. “We were really exploring ideas of bringing together the traditions that I love. I grew up playing Latin American music, the genres under that large umbrella. They’re traditions I continue to explore and love, particularly the rhythms but also the song forms that come with them. Those early albums capture that exploration, which is wrapped up with the classical music element that I really love and went to school for, the desire and aspiration for structural clarity in composition and arrangement and the playing itself.”

The music ranges far and wide. He introduces the collection with “Ericka,” a winsome piece from his widely influential 1998 album La Bikina. His pianism is luminous, his touch strong and refined. His lines and the feel of the piece call to mind Keith Jarrett, a beacon for jazz players deeply engaged with classical music. By opening with a piece written by his older brother, percussionist Marlon Simon, he seems to be making a clear statement that 25 Years isn’t only about him. With tenor saxophonist Mark Turner, altoist David Binney, bassist Ben Street and drummer Adam Cruz, he’s joined by a cadre of era-defining improvisers who are still some of his closest collaborators. “Pere,” an elaborate melody from 2001’s Afinidad that writhes over a 5/4 groove, features a quartet with Binney, bassist Scott Colley and the extraordinary drum tandem of Brian Blade and Cruz on percussion and steel drum. The extended exploration of “Pathless Path” from 2013’s Trio Live In New York at Jazz Standard captures his celebrated combo with Blade and bass maestro John Patitucci giving a master class in creating form out of freedom while relentlessly building tension over more than a dozen simmering minutes. It’s music that could only flow from players bonded at the deepest level. “It’s an extended family that has played such an essential role in this music,” Simon says.

If the first disc showcases the matrix of relationships that feed and define Simon’s music, the second concentrates more on his work as an arranger and orchestrator. With the support of three grants from Chamber Music America’s Doris Duke Charitable Foundation program for jazz composers he’s increasingly investigated expanded instrumentation, like on “Uninvited Thoughts” from his critically hailed 2018 album Sorrows and Triumphs. Featuring the Afinidad quartet (Binney, Blade and Colley) plus percussionist Luis Quintero and the Imani Winds, it’s an elegantly constructed piece marked by a spritely melody and acutely balanced interplay between the two finely melded ensembles.

No group has provided more opportunities for experimentation in orchestral writing than the SFJAZZ Collective, which commissions original works for every member each season. His long tenure in the all-star band (formerly an octet and now a septet) is represented by “Venezuela Unidad” from Live at SFJAZZ Center 2017: Original Compositions & the Music of Ornette Coleman, Stevie Wonder and Thelonious Monk. An impassioned cri de coeur over the ongoing humanitarian disaster that has beset Venezuela for more than a decade, it’s a verdant tapestry of shifting meters and tempos. Commissions have played an invaluable role in his growth as a composer, “allowing me to explore the realm of what might be called symphonic jazz,” he says. “The possibilities that it offers in terms of timbre and combinations of various instruments you wouldn’t normally have available is so rich. In the SFJAZZ Collective we had for a long time the four main horn sections of a big band and a vibraphone. That offers a great opportunity as a composer.”

At this point Simon has spent far more of his life in the United States than his homeland, but Venezuela still provides the life-sustaining marrow of his music. Born July 27, 1969 in the oil port of Punta Cardón, he grew up in a household filled with music. His father hailed from Curaçao in the Dutch West Indies, and he instilled a love of music in his sons, percussionist Marlon Simon, trumpeter Michael Simon and Edward. The brothers performed music for dancing at local fiestas and events, tapping into an array of rhythms from Venezuela and beyond (they last reunited for a performance together in 2010 as Simon, Simon & Simon). “My older brother played timbales at the time, and we had our band playing parties and anniversaries,” Edward says. “In a way that strong connection with the dance floor and dancers left a great imprint on me. To this day, a groove is an important element in my music.”

Simon was serious enough about the piano that at the age of 15 he left Venezuela and moved by himself to Pennsylvania to enroll at the Philadelphia Performing Arts School, a now-defunct private academy. He continued his classical studies, but he also discovered jazz, and eventually connected with Philly masters like bassist Charles Fambrough and guitarist Kevin Eubanks, who encouraged him to move to New York. Landing in Manhattan in 1988 at the age of 19 he quickly established himself as an essential new voice. A five-year stint with the great altoist Bobby Watson followed a nine-year run with trumpeter Terence Blanchard (who had both thrived in the hard-bop academy of Art Blakey’s Jazz Messengers) firmly established Simon as one of his generation’s leading accompanists. All the while he was looking to combine his growing authority as a straight ahead jazz player with his love of Latin American idioms, ambitions that put him at the center of a brilliant wave of fellow South American artists who had also recently arrived in New York. That creative journey unfolds in exquisite detail on 25 Years, an anthology that documents the arc of a culture-bridging artist who’s still ascending.