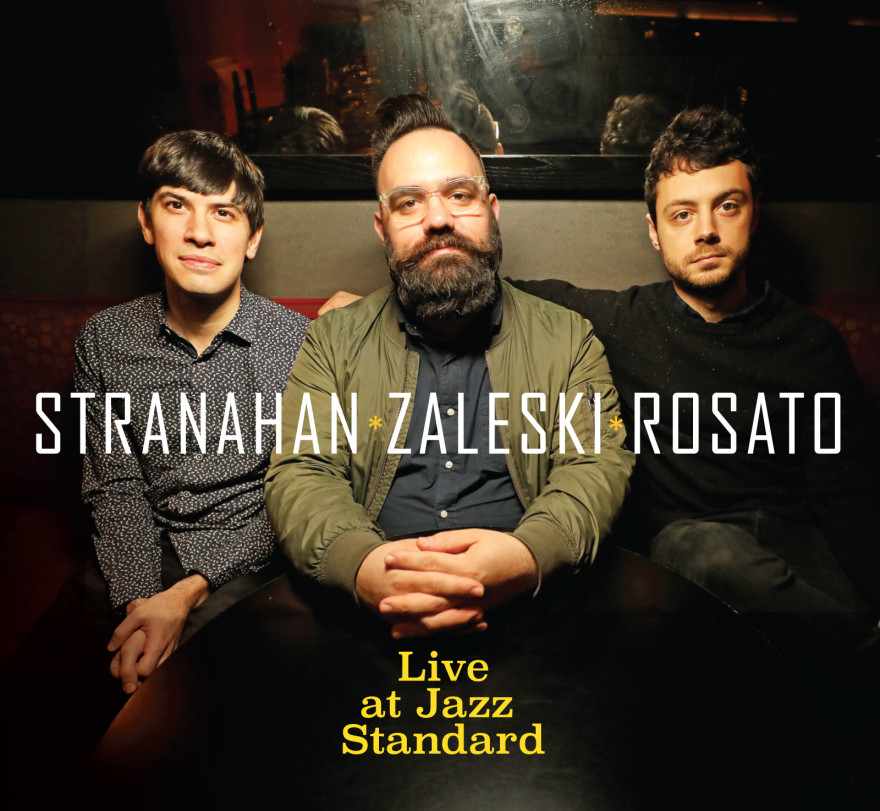 Drummer Colin Stranahan, pianist Glenn Zaleski, and bassist Rick Rosato were all at a formative stage in their respective careers when they met more than a decade ago. While their trio, known simply as Stranahan / Zaleski / Rosato in acknowledgment of their equal and personal contributions to a distinctive group sound, has remained a key priority for all three, their collaboration has become something of a victim of their own individual successes. Six years after their last album, the trio has managed to shake off the demands of rising jazz stardom and reconvened for their long-awaited follow-up, Live at Jazz Standard.

Despite the intervening years, this exhilarating set finds the trio’s chemistry not only intact but flourishing with the passage of time. In part that’s due to the members’ shared commitment to continuing to maintain their collaboration as a going concern. But it also reflects the individual successes and experiences that each of them has enjoyed apart from the others as in-demand bandleaders and sidemen. All of those elements converge in electrifying and captivating fashion throughout the six tracks on Live at Jazz Standard, due out September 20, 2019 via Capri Records.

“There was a lot of time between our second and third records when we all got busier as sidemen,” Zaleski explains. “But our chemistry only deepened in that time. As we grew we were gathering professional experience, and I think that has definitely seasoned our chemistry together.”

That experience has been estimable for all three. Stranahan has traveled to India with Herbie Hancock to commemorate the 50th anniversary of Dr. Martin Luther King’s visit to the country, and toured the world as part of guitarist Kurt Rosenwinkel’s trio and quartet. Zaleski has made a name for himself playing with the likes of Ravi Coltrane, Lage Lund, and Ari Hoenig, and was a semi-finalist in the 2011 Thelonious Monk International Jazz Piano Competition. Rosato is an in-demand bassist who has toured and recorded with artists like Gilad Hekselman, Joel Ross, Melissa Aldana, David Kikoski and Will Vinson.

While their previous two releases, Anticipation (2010) and Limitless (2013) were studio dates, the trio was intent on capturing the thrill and intensity of their live shows this time out. For the occasion they chose one of New York City’s most revered jazz rooms, the Jazz Standard, to capture four sets of music. “The Standard has always been very supportive of this trio,” Zaleski says. “It feels like a home for us, and we’re very lucky to have that relationship with one of our favorite clubs. We were really able to open up playing live in a great room with great sound and an enthusiastic audience.”

Though all three members contribute compositions to the trio, Live at Jazz Standard is largely dominated by Zaleski’s tunes. Reprised from Limitless, “Forecast” opens the album with a simmering and malleable sense of swing, its 9-minute length exemplifying the way that these renditions stretch the material much further than the studio originals. Zaleski and Stranahan both take compelling solos, but it’s the intricate interaction and instantaneous conversation between the three that is most striking.

Zaleski also contributed “Sullivan Place,” a new composition that reflects the view from the pianist’s Brooklyn window with a gentle but bustling hum of activity. The angular, Monk-inspired “On the Road” is taken from Anticipation and highlighted by Rosato’s elastic bass solo and the charged, playful back and forth between Zaleski and Stranahan. The crystalline beauty of “Chorale (for Fred Hersch)” is an apt dedication to the legendary pianist, who has been an avid supporter of the trio. The depth of emotion that shines forth from the piece could only have been intensified by the fact that Hersch was in the audience during its performance.

In addition to Zaleski’s pieces, Rosato contributed the elegantly powerful “Waltz for MD.” Given those initials’ prominence in the jazz pantheon, the composer remains mum about whom “MD” actually refers to – even his bandmates are unsure, and the guessing game has evolved into a running joke in the trio. The set is rounded out by a gorgeous exploration of the standard “All the Things You Are,” more than doubled in length from the version that opens Anticipation.

Stranahan and Zaleski initially met in 2005, when both were students at the Brubeck Institute at the University of the Pacific in Stockton, California. Two years later Zaleski matriculated at the New School in New York City, where his assigned roommate in the dorms was bassist Rick Rosato. The three first crossed paths when Stranahan paid a visit while on break from his own studies at the Thelonious Monk Institute of Jazz in New Orleans, though they didn’t play as a trio until 2010, when Rosato was curating a series at the club Upstairs in his native Montreal and wanted to “bring a taste of the rich musical experience I had in NYC to my hometown.”

“From the first note we realised there was something there,” Stranahan recalls. “It was almost instantaneous; we just sensed that connection and playing together felt so effortless. The music was just flowing out of us. Since then I’ve felt that way every time we’ve played together. The friendships and the music have only gotten stronger, and that’s a unique situation.”

“This trio really feels like home for me,” Rosato adds. “We’ve been playing together as a band for almost a decade now, and so we’ve gotten to know each other on a very deep level both musically and personally during that time.”

At Stranahan’s urging the trio quickly entered the studio to document their newfound connection, recording Anticipation in the drummer’s hometown of Denver. The session was among the earliest recording experiences for all three of them. For Zaleski, the fact that each of the bandmates was at a similar point in their fledgling music careers played a vital role in their burgeoning relationship.

“There’s something special about the connections that you forge when you’re that young,” Zaleski says, pointing out that all three were under 20 years old when they met. “As you grow into an adult and a professional, you don’t really get to have that kind of quality time together. I think that comes out in the music. We have a personal history: we came up together, we were figuring out how to have a career in music and learning how to play at the same time. One of the reasons it’s so important for us to keep this band going is because relationships like that can’t ever really be forged again.”

Drummer Colin Stranahan has had a passion for music since he was a child, making music his life’s focus and passion from the first time he sat down at a drum set at age eight. He studied with Ari Hoenig and Nasheet Waits at the New School before attending the prestigious Monk Institute in New Orleans, where Terence Blanchard, Herbie Hancock, and Wayne Shorter were his main educators. Colin currently performs and tours with a wide array of artists including Maria Neckam, Kurt Rosenwinkel, Fred Hersch, Niia, Dan Tepfer, Ron Miles, Glenn Zaleski, and Rick Rosato.

Glenn Zaleski is a Brooklyn-based pianist who originally hails from Worcester, Massachusetts. He maintains an active performance career in New York City and abroad, including a duo with his brother Mark. In 2011 Glenn was a finalist for the APA Cole Porter Fellowship in Jazz as well as the Thelonious Monk Institute’s International Piano Competition.

A 2010 graduate from the New School, Montreal-born bassist Rick Rosato was a precocious young talent, gigging around Montreal by the time he was 18 years old. He has since performed at notable locations including Smalls Jazz Club, the Jazz Gallery, the Bern International Jazz Festival, the Bimhuis in Amsterdam, and many more. The versatile and virtuosic bassist is in demand, lending his skills and sound to such leading names in jazz as Ari Hoenig, Tigran Hamasyan, Dan Weiss, and Aaron Parks, among many others.