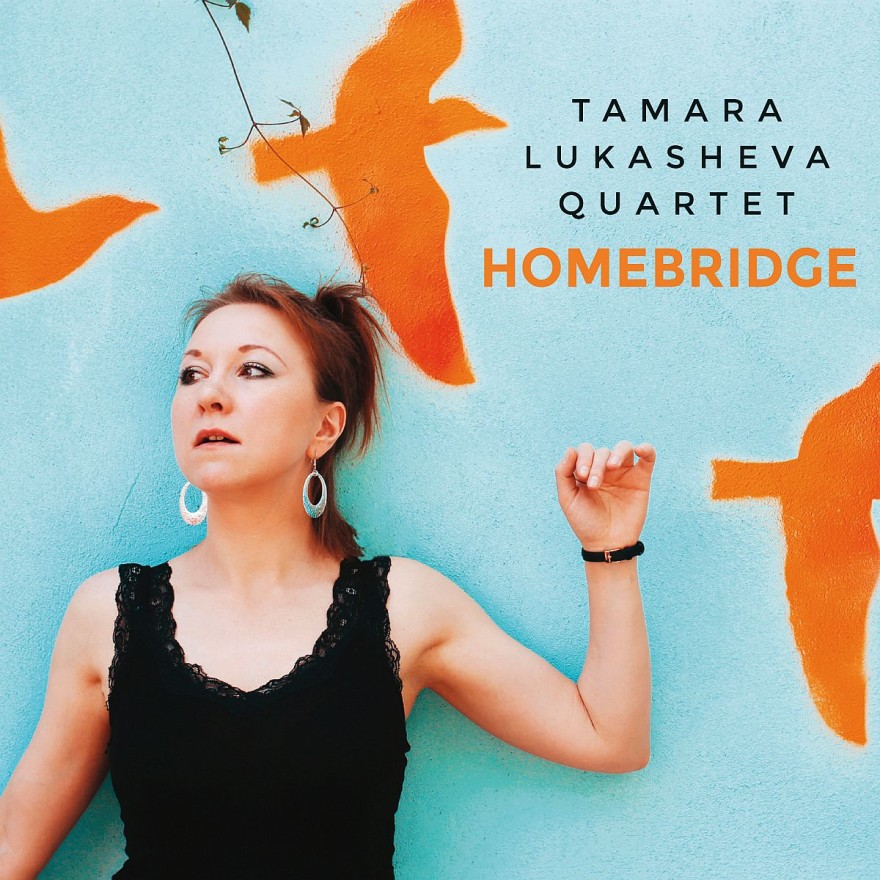 Ukrainian Singer, and now also long time German resident, Tamara Lukasheva is the most striking new discovery and an incredible talent I recently came across and given her quality it might easily stay like that the whole year long. First, her vocal skills are phenomenal, then add to that the Voice, which is capable to surprise you anytime she would feel like taking a little part improvised. And, if it wasn’t yet enough for a single artist, on top of that you are getting a sensitivity which crosses between the usual heritage and cultural background. That last point is possibly most responsible for the freshness of that recording to the greatest degree.

From an opening Night and the Moon, sung half in Russian half in English, she sets an incredible romanticism over the entire piece. Music alone, but also her lyrics which had been balancing between an oriental ballad and melancholic Dumka, trying to describe the sense of loneliness.

Then comes tittle song, the Homebridge, lovely romantic ballade with fantastic piano accompaniment by Sebastian Scobel. Very touchy composition of her own, showing an incredible versatility.

But nothing would prepare you to what comes after with a song called Alte Hauser, which a nothing but sensational tour deforce balancing between folk spirit of the village song and TNT loaded Boss nova, with counter points that someone would suspect Laureen Newton about singing it. Clarity of her voice and theatrically – architectural structure is absolutely innovative and mesmerising with its thin balance between incredible infantilism and fully mature psycho – drama. This song is one of 3 on that recording which are refering to the poetry of prematurely died, autistic poet Asja Klimanova, Lukasheva’s friend to whose memory this recording is dedicated. Let’s focus on them for a while then as they are sort of sub-chapter for what is happening here in general.

Where are you going Yanichku is another one, with brings that feeling of naivety and the way she sings those word s to challenge our sensitivity and ability to understand something what clearly stays alive in her memory but reminds sacred for the listener to whom only artistic Tamara’s translation is available.

Last one, called I will stop disappearing, comes after her own titled Awake, which creates wonderful emotional platform between her own expression and the magic hidden in the little poet’s thoughts. It is sad and more epitaph than the others, with both lyrics and the nocturnal piano and double bass inclusion framing it. It is sung, as others in original, but transcriptions are available for listener to unknowledge the meaning of the words. That is just the right choice as the natural melody of the Russian language is inseparably integrated with the whole tissue.

Another person mentioned in dedication is Lukasheva’s great master and friend, Yuriy Kuznetcow, the great worldwide recognised Avantgarde pianist, Band leader and animator of contemporary music movement in his and her native Odessa. His composition, The Moon is Clean is very nostalgic and healing and the accompanying lyrics are bringing the same feeling of Russian nostalgia, so well understood and executed here.

The most vigorous pieces are two interpretations of the traditional songs. First, titled In As moll, is probably the most technically difficult song here and I do see very few vocalists who would have tried to do so. She puts all she’s got into it with the range going way above 3 octaves and high notes sung long lasting and kept perfectly clear. This is enough to fine line top class singer and she is already there on the beginning of her carrier, which I am going to watch carefully.

Closing Marisija is more conventional alike composition for piano Trio arranged with space given to the singer, but her, here keeps mixing scat with the same propulsive, shortly accented way of singing she introduced earlier in a mentioned Triptych opening additionally enriched with syllable-tonal patterns playing with the rhythmic frame of the composition.

It is congenial and breath taking, what more can I say.