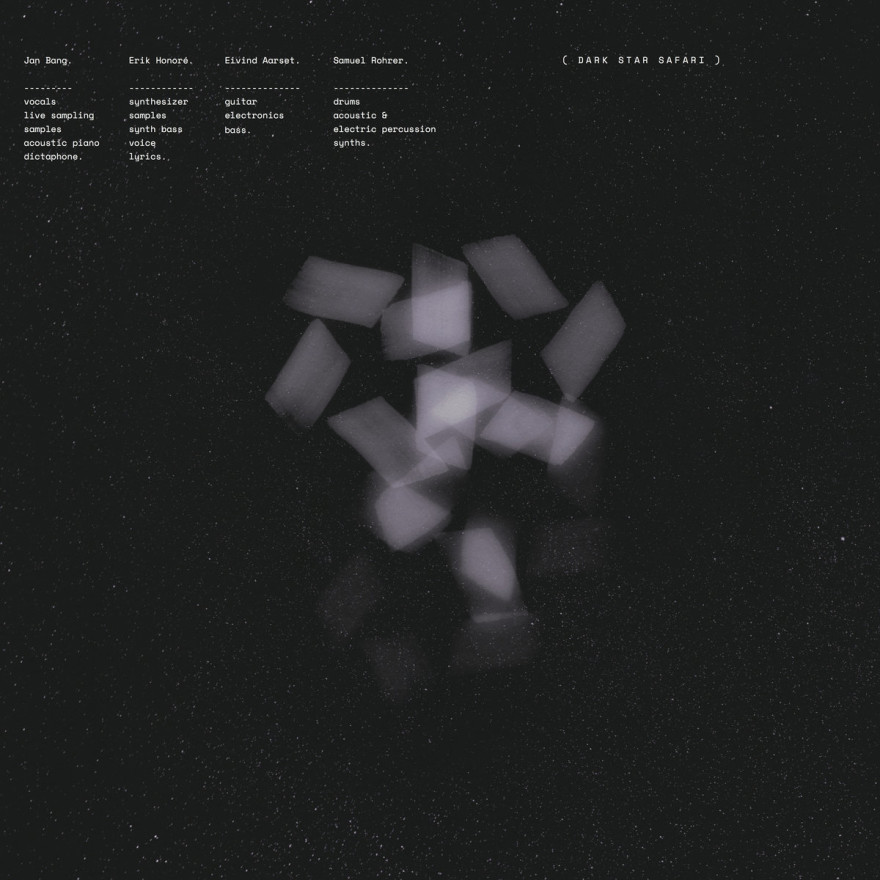 Dark Star Safari is the work of four kindred spirits, their open modus operandi, and a remarkably interconnected creative nerve system. Key to their collaboration is an organic freedom that enables the music “to fill itself in”, to be self-actualizing via the musicians as medium. The music of the 10 songs resulted from a two-stage process: an initial phase of free flowing open improvisation, and a subsequent exploratory phase where hidden potentials were discovered and nurtured.

The groundwork of the album’s music originates from a session initiated by Samuel Rohrer, who invited Jan Bang and Eivind Aarset to the renowned Candy Bomber studio in Berlin. The session was run under the imaginative craftsmanship of sound engineer Ingo Krauss, who worked in the famous Conny Plank studio, and its recording and mixing employed sophisticated use of vintage analogue equipment alongside cutting edge digital processes. This meeting opened the door for something larger to emerge. The group did not settle for just the outcome of the initial open improvisation. They were driven to dig deeper, to attentively examine and manipulate the material, in order to discover what it had to offer. This caused a creational chain reaction, forcefully spreading across the group.

During this second phase, Jan Bang, while meditating upon the possibilities and reach of the improvised material, felt a strong urge to give additional shape and colour to it by singing. Thus, he organically stepped into the role of vocalist, a role he had not pursued since the early days of his musical career. He sent the results to Erik Honoré, who immediately was inspired by its potential, quickly penning lyrics and providing the project with its name. Honoré composed two additional songs, Mordechai and Fault Line, and thus rounded the project out towards a fully realized opus. The group continued this back and forth process, with Samuel Rohrer and Eivind Aarset bringing in fine-tuning and enrichment to the song structures and textures.

Born out of the spirit of open improvisation and the improvisational practice of the immediate live-remix, Dark Star Safari transcends both of these creative processes in a pursuit of fresh approaches to songwriting. Their music is now ready to meet the hearts, minds and bodies of live audiences, to evolve even further through that interaction.

Recorded in December 2017 and mixed in June 2018 by Ingo Krauss at Candybomber Studio Berlin. Additional recordings at Punkt Studio Kristiansand, The Green Room and home-studios in Oslo and Berlin during Spring/Summer 2018. Mastering and Vinyl cut by Mike Grinser at Manmade Mastering Berlin, December 2018. Produced by Dark Star Safari.