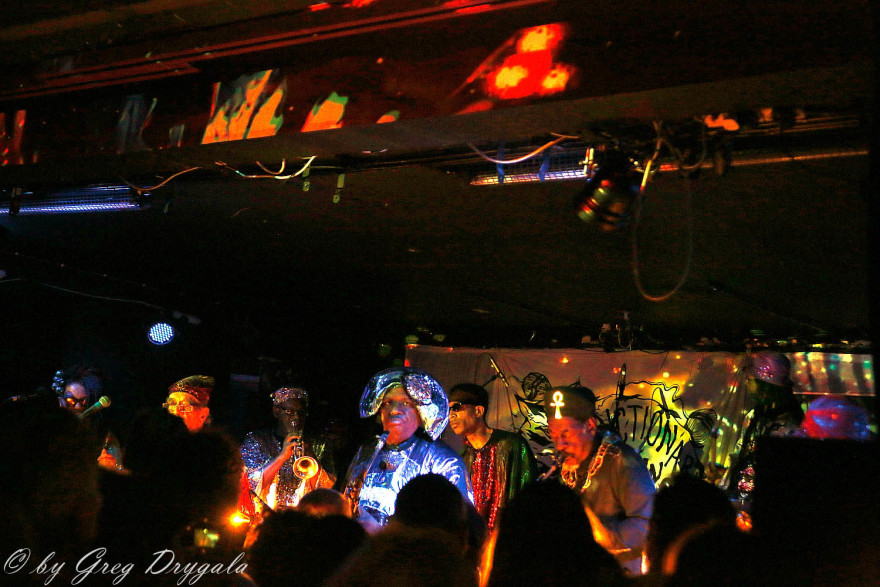 Three day residency of the Sun Ra Arkestra in Lewes, hosted in the Con Club, is a part of The Brighton Alternative Jazz Festival co-organised by Dictionary Pudding. Arkestra was originally created and led by Sun Ra, as he preferred to be called, in the beginning of 60-ties. As the band it was always an open platform and it had many members floating through during the long period of its existence. Keyboard wizard, Afro-futurist and philosopher Ra led it to his end in 1993, when he left the planet. Today his longest time collaborator – Marshall Allen (92), who took a lead of the band 22 years ago, continues his legacy which he fully contributed to. A lot had been said about Arkestra hence no point for repeating. Those who are interested in history will find for themselves. Let’s talk about present then. 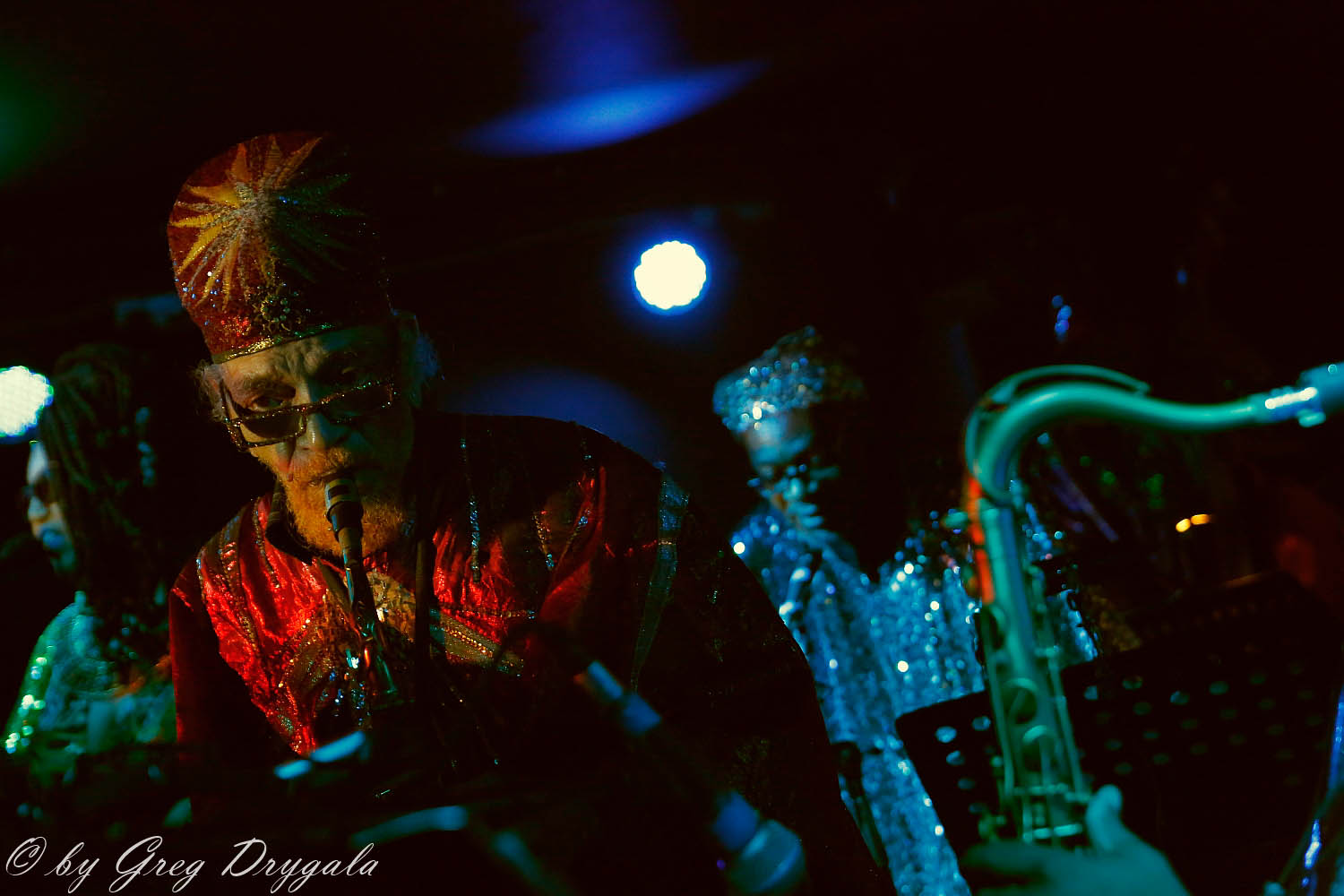 Without too much hassle the band of Eleven went on the stage and the journey begun. Arkestra was always about happening. Musically and visually. Therefore their costumes referring to space connection were the part of the play, as it was always before. Maybe except vocalist Tara Middleton who was wearing traditionally patterned Nubian gallibaya dress. First raw of brass men was full glossy of shining not just because of their instruments then. Then the music started and the spaceship hung up in the air driven by the cannonade of percussive motives kept in order by propulsive bass riffs. The rhythm section contained bassist, drummer and two percussionists swapping instruments randomly. But also reed men had been involved, between playing their own instruments. Routine to which long time Arkestra fans had been well used to.

The Arkestra keeps going strong under Marshall’s lead which is both joy to ears and eyes to experience, but what makes me extremely happy is the fact that it also evolves and still stays alive and fresh. All what made it in the past is still present in this tissue but it merged into the new element as well. It grows in the time passing by incorporates into its aesthetics all what fits or have a meaning that will match the cosmic trip.  I had the same feeling listening to their set last year in London’s Union Chapel, right about the same time of the year. As always their cacophonic brass tyrants and synthesised waves noises are making the cosmic part of the spine but old good blues is all time present and sticks to the gravity of the Earth just as we like it. 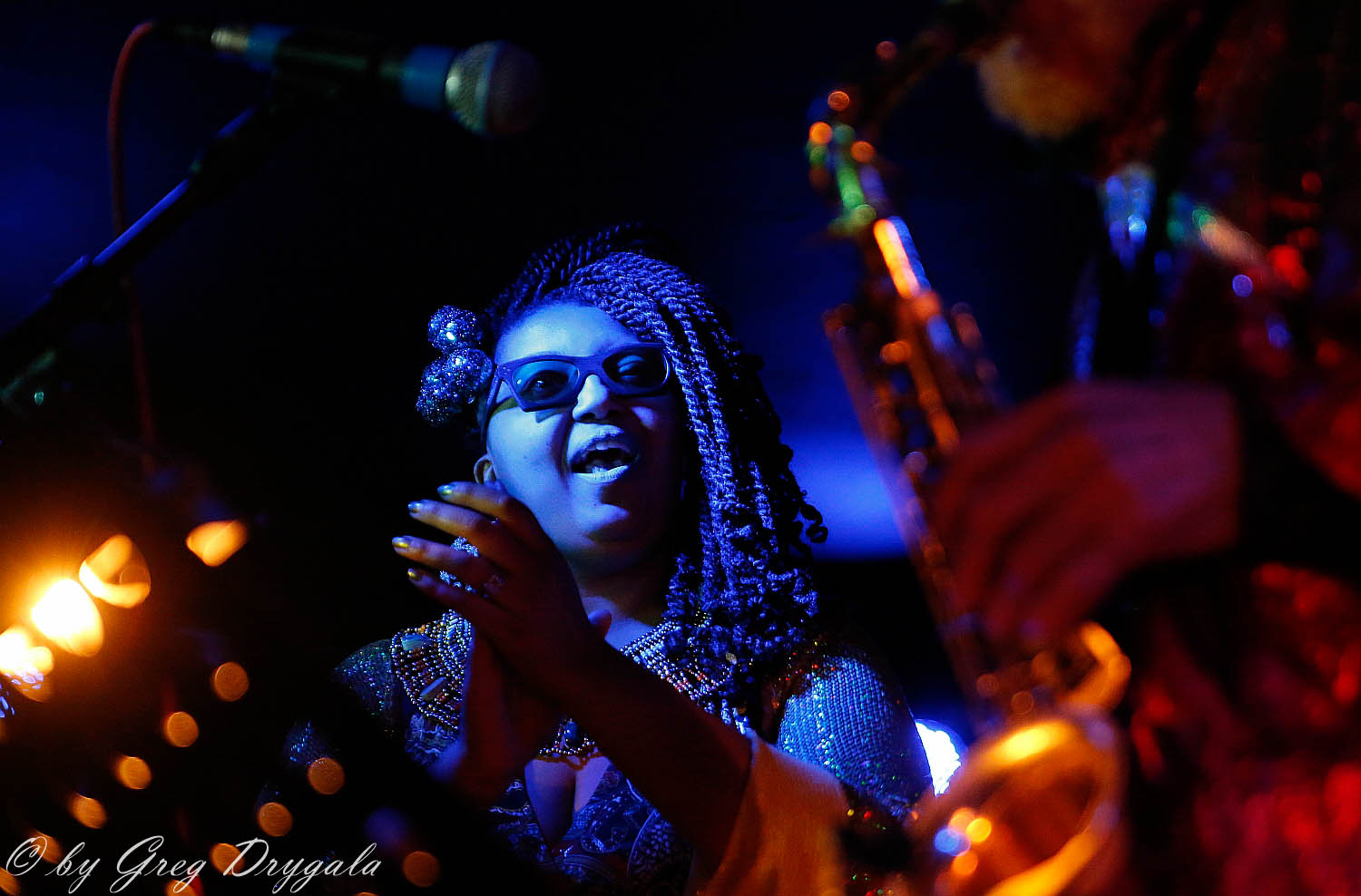 So was a true during the Lewes gig. Marshall Allen’s direction over the band was gentle but firm. As they read each other so well there is no point of accelerating it more than the visual act demands. Marshall himself is doing strong and his sax solos were pretty fiery and flying high. I especially enjoyed his singing. With harmony with Tara’s voice those duets were splendid. Her deep, low and slightly matt voice makes fantastic match to Allen’s light alto. It brings something special and holds into the New Orleans tradition to my ears the way they come together. Singing, dancing (and being a violinist as well, however she didn’t play it here) makes her the natural continuation of who June Tyson was in an original squad. She has her own natural charm and the gift of bringing a new flavour into traditional Arkestra songs. She can beat bit pop-ish and dandy if she wants and that is pretty cool as it just hits today’s listener more accurate. Given the fact that these are different times the revolutionary character of Ra’s music doesn’t have to be exposed like it was in 70-ties. An Astro-Black, Arkestra’s flagship song she opens the second set with is the best example of it. She brings is gently, keeping its hymnal character alive, but her articulation moves the focus the lyrical side and shows how wonderful poetry it is to enjoy once it doesn’t have to be a weapon too. Listen to the 1972’s original and you immediately get what I mean. But get to 21 Century or Space is the Place and the skills will hit you in the face. Keeping up with crazy changing tempo, scatting, or shouting in unison with brass. That’s the place in space where only well adopted organisms can survive. 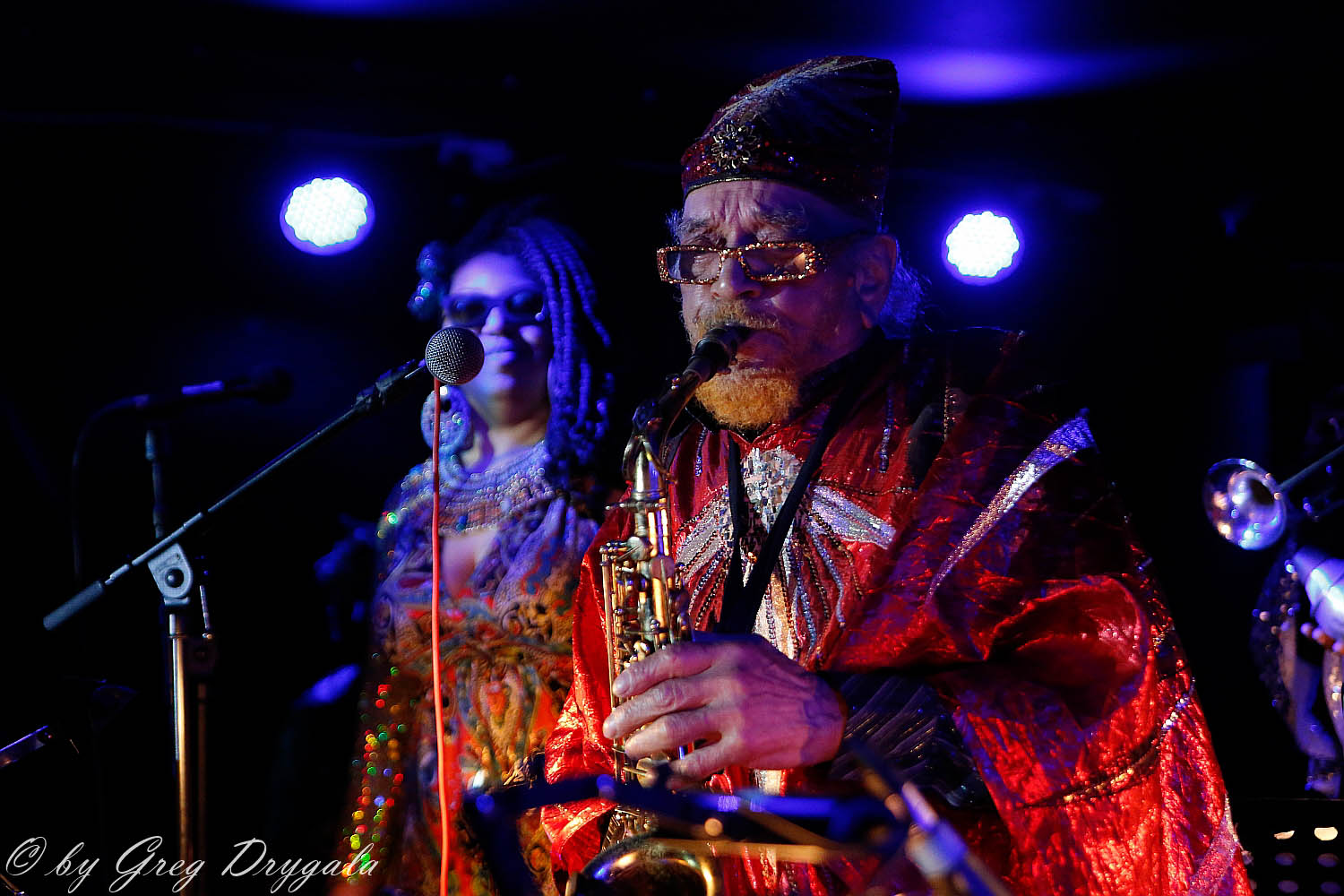 But the trip to Saturn could not be completed without the brass. This is where deposits of all cosmic powers are laying. Starting from Marshall himself they had been all brilliant creating clouds of harmonies going under the roof.  Especially cosmic was Allen’s EWI playing. Instrument which harmonically replaced crazy Ra’s keyboard trips and helped a lot to establish the Arkestra’s sound-scape under Allen’s direction. Then naturally long virtuoso solos played by existing band mates. 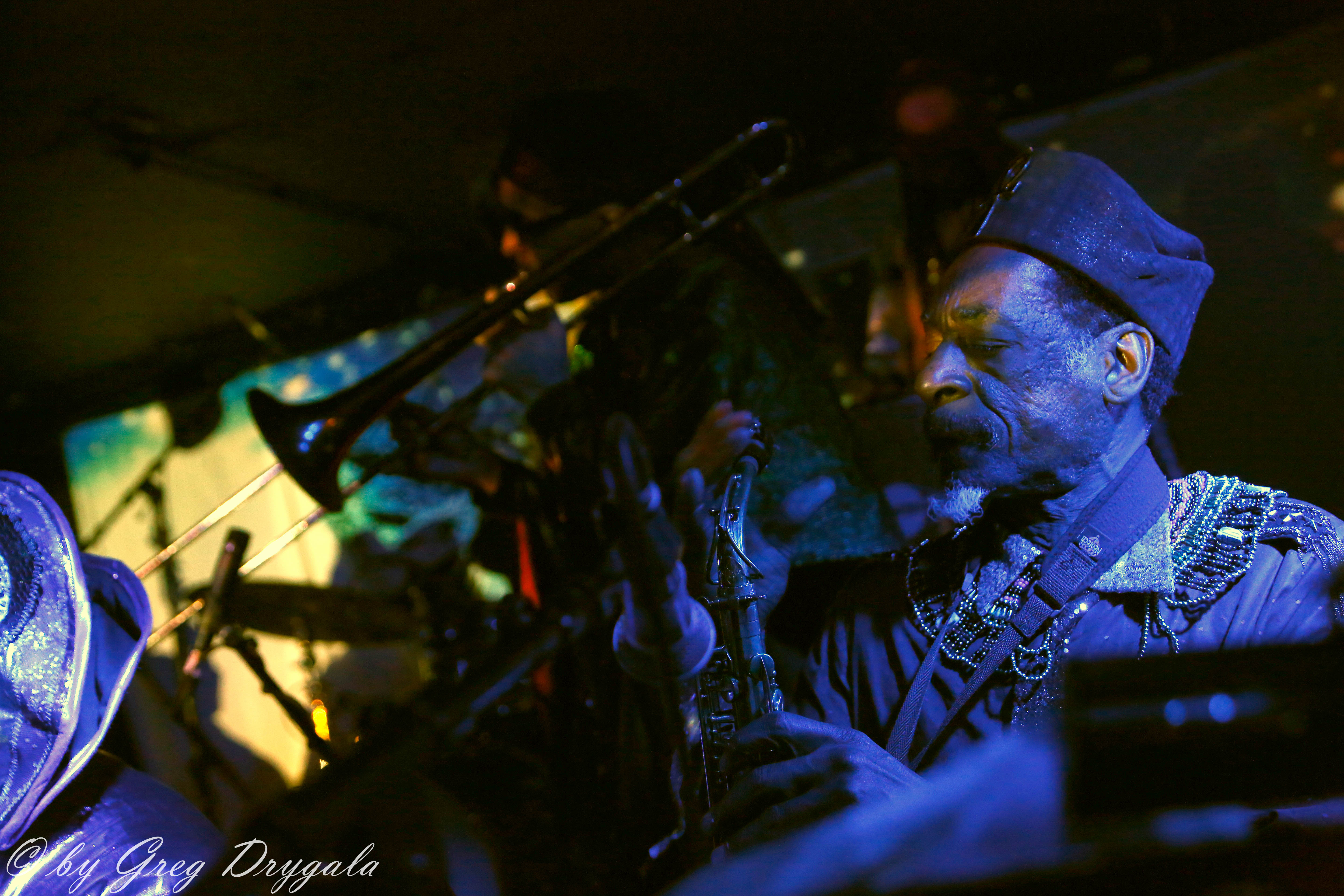 Here the most prominent parts are coming from Knoel Scott who’s tenor lines had been present in music from Saturn from the 70-ties. He remains one of the most entertaining members as I remember it. Damn good conga player too as he acts as rhythmic section extension with a great dedication. His solos are very spiritual and fiery. He also reminds me Rosco Mitchell of AEOC. The tribal approach of an AACM legendary group belongs to the same universe which Cosmic Fleet of Sun Ra is sailing through too. 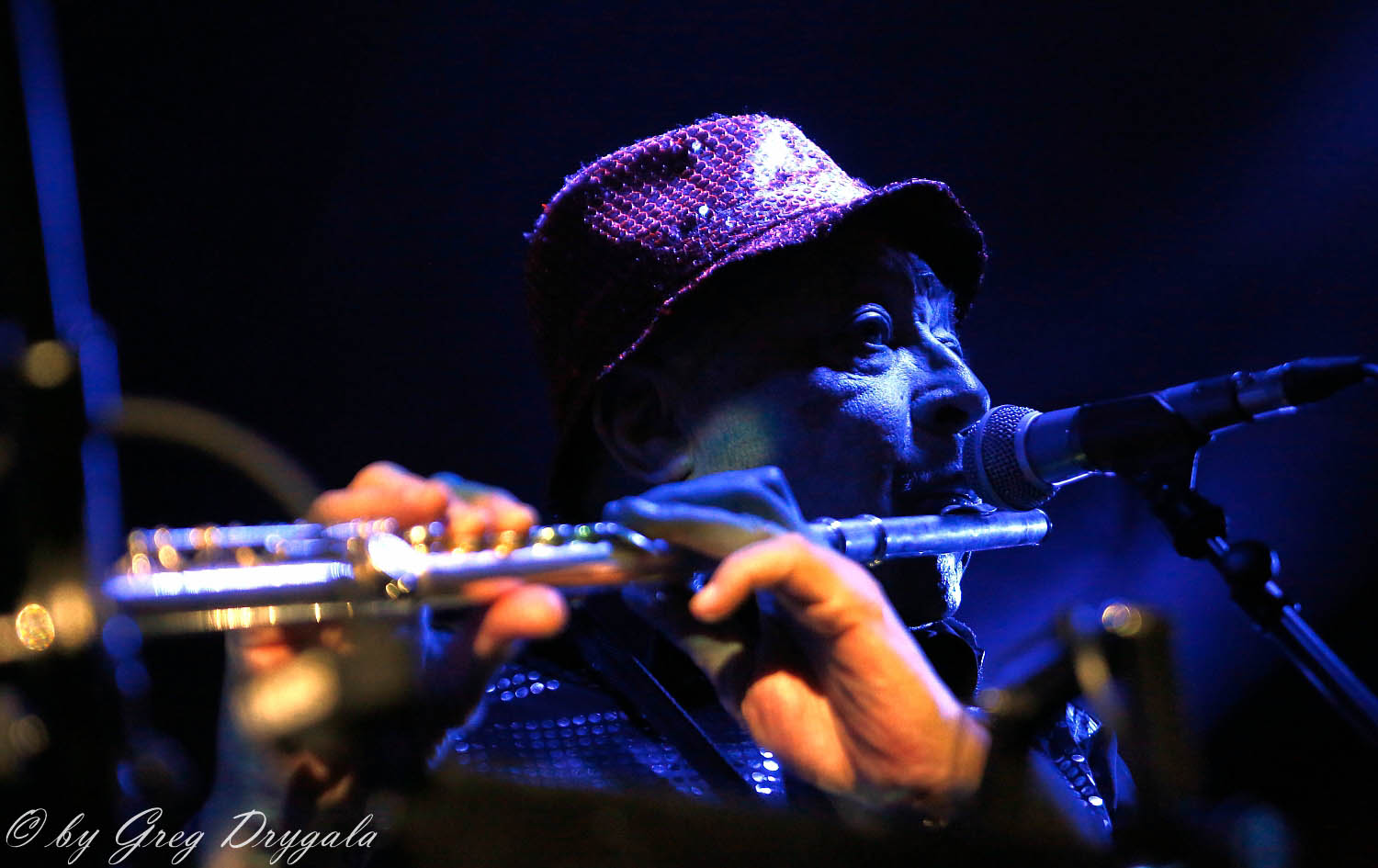 Next would be Danny Ray Thompson, like leader, another long runner and most influential “Arkestrist”. His flute solos decorated most of the tunes they played tonight. Baritone sax figures he played in unison made a semi improvised music flow rich and meaty. Rhythmic figures he introduced became repetitive patterns on which the show build up on. They made a core for the rhythmic structure on which Wayne Smith Jr. Set up his framework. 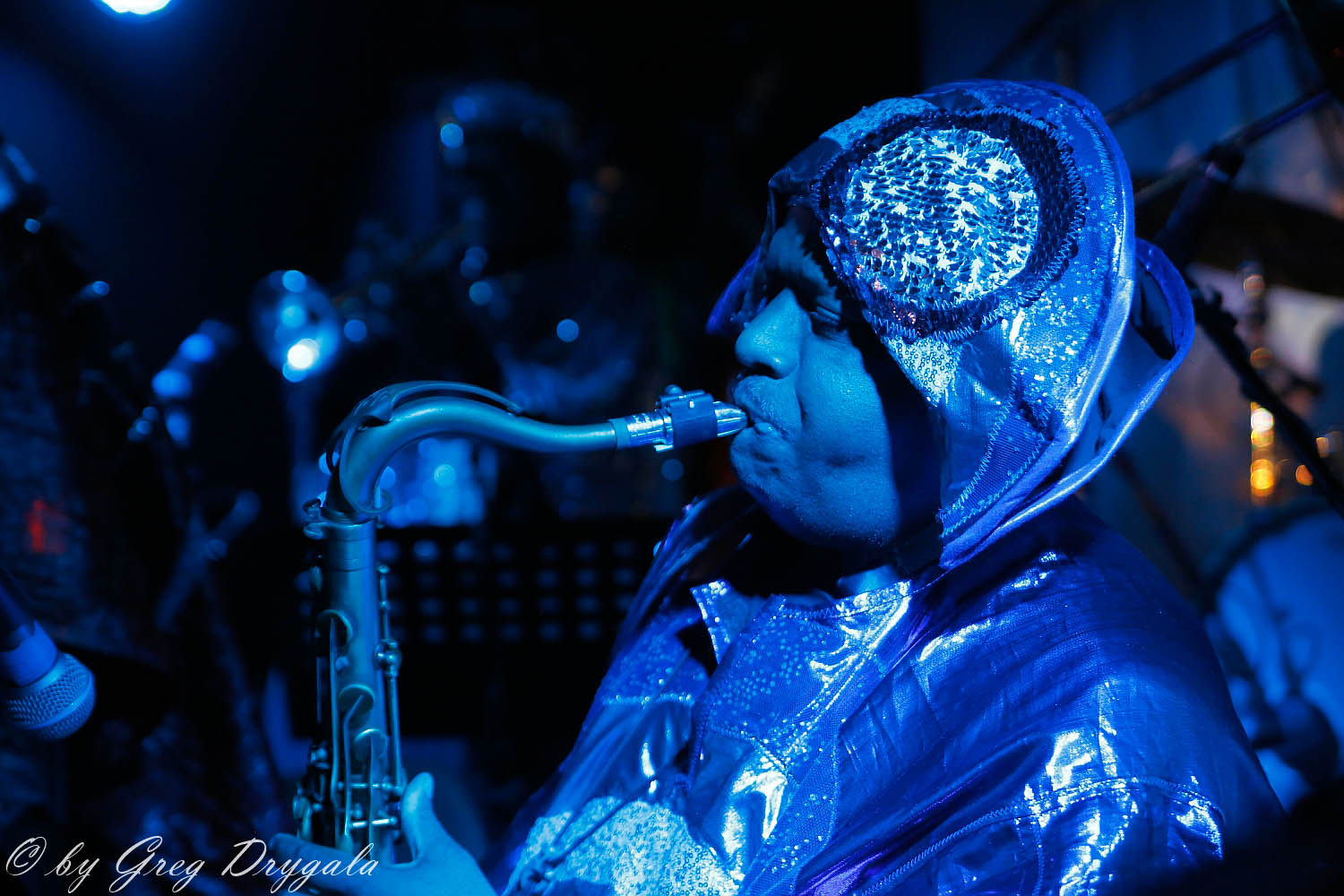 James Stewart, now over half decade on board. Tenorist who’s elegant lines are deeply rooted in be-bop and quick passages he plays are putting the ship on course.

Those had been most visible making first raw , but equally important was contribution of trombonist and trumpeter.

To sum up it never stops fascinating me how this ideology stayed fresh and attractive so long and it occurred to me that it must be for two reasons at least. First is obviously the genius of Ra as a band leader, who made it so attractive to musicians and the audience over decades as they had been going together. Second must be that they never stick up as a band with a single idiom. Let’s say Jazz or Blues. Therefore the audience which could identify with this was huge. After rebel days the message had been passed to Hippies. Then the Funk hit and the flow was on again. In 80-ties fans of psychedelic rock following bands like Gong, Can or Blurt could still stay on. Never mind God Bless Them and the whole movement as the joy to the heart they are bringing is simply priceless. 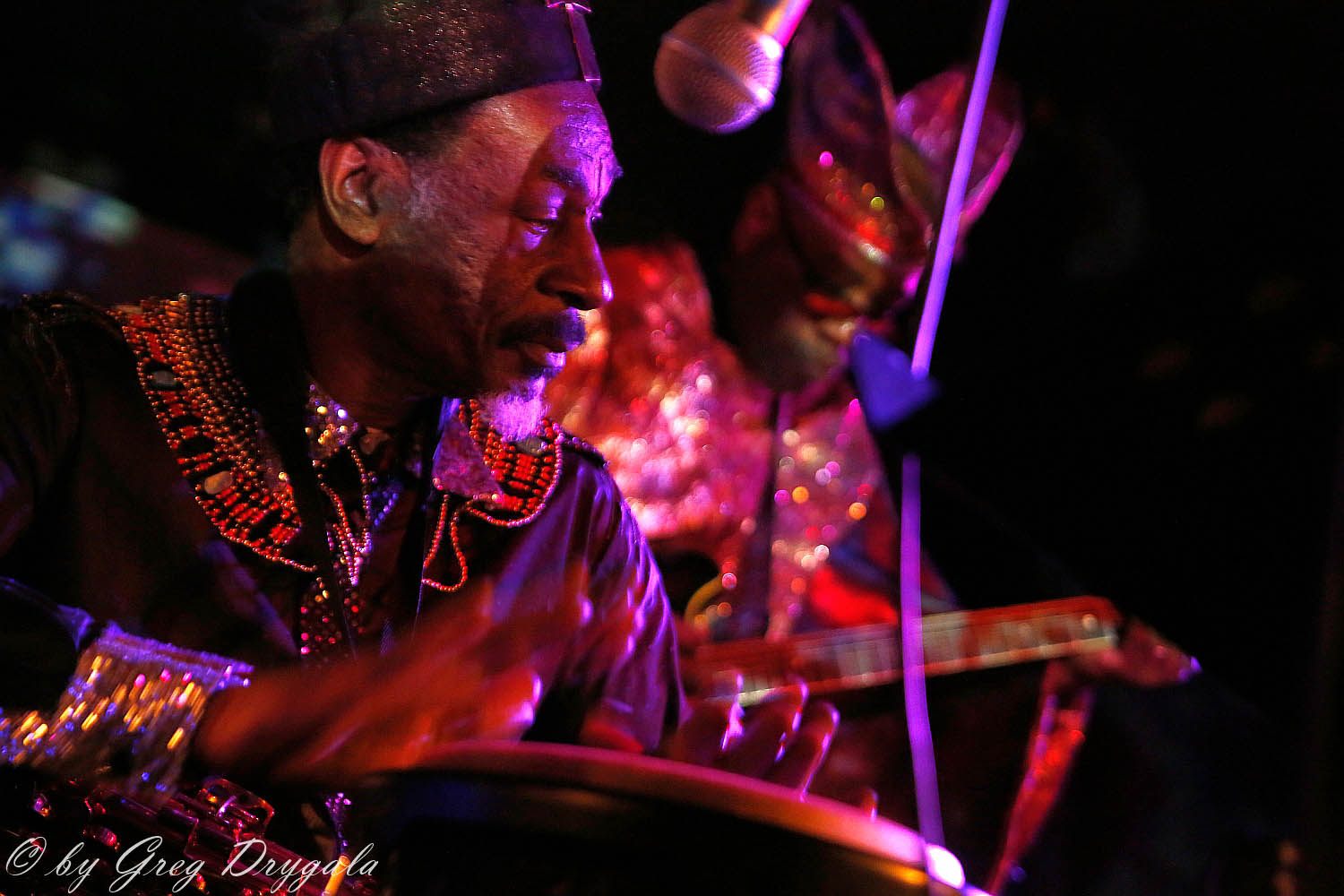 Ps: Those who missed that gig can make it in Con Club, Lewes again during following two nights. If that is too far for you the next set will be come back to London’s Union Chapel on 31st of March.  Then tour continuous heading North with Leeds and Manchester on list among others as far as I am aware. Check it for yourself and try to catch up if you got a chance. This is touching the living legend on the first touch but more important is that this is going to be a massive stardust blast to your soul, heart and body. Don’t miss it !

Sneak recording from a Day 2 gives you some taste of what was happening there.