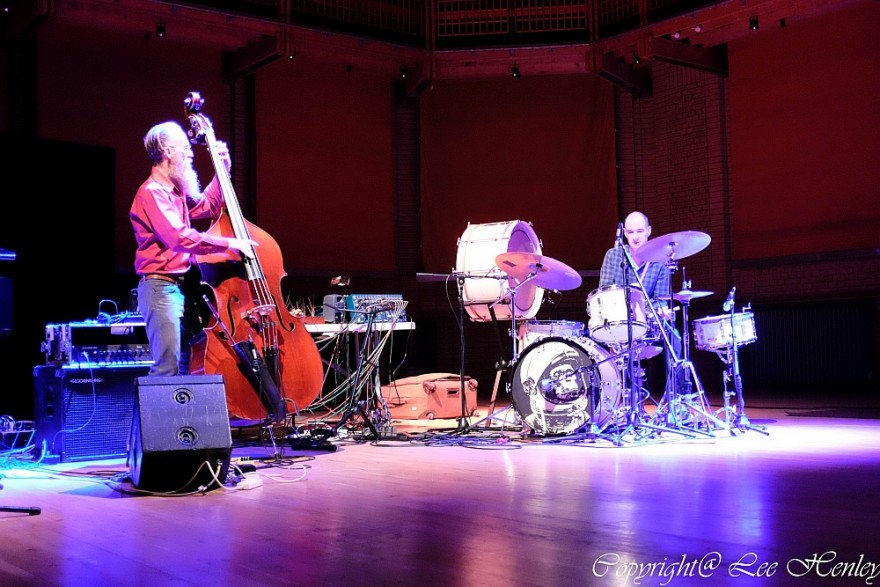 I am delighted to post this article below and extremely happy to host it here. Report of the Saturday’s gig is the first one which I outsourced and I hope that it is not going to be the last one too.  It had been written by two dear customers , who later on became the friends too. I am proud to say that it is happening to me. I could not go there myself, but I remember that I introduced these artists to my friends at some point and recommended warmly to go the concert if there will be a chance any soon.  Nothing makes me more happy than seeing people enjoying the music I love myself too. It is also perfect situation when interest in playback quality which bought us together at the beginning led on the end to the vast exploration of the music. It continues establishing itself on the base of fascination in Art we are sharing, experience and information exchange about our interests on the ground of the spiritual connection to the act, not the focus on the playback quality.

I hope  that you enjoy reading this reviews and watching pictures as much as I did and you like it and will warm encourage my fresh contributors to continue enjoying to go and experience music live and sharing their thoughts and feelings about it with all of us. Thank you . 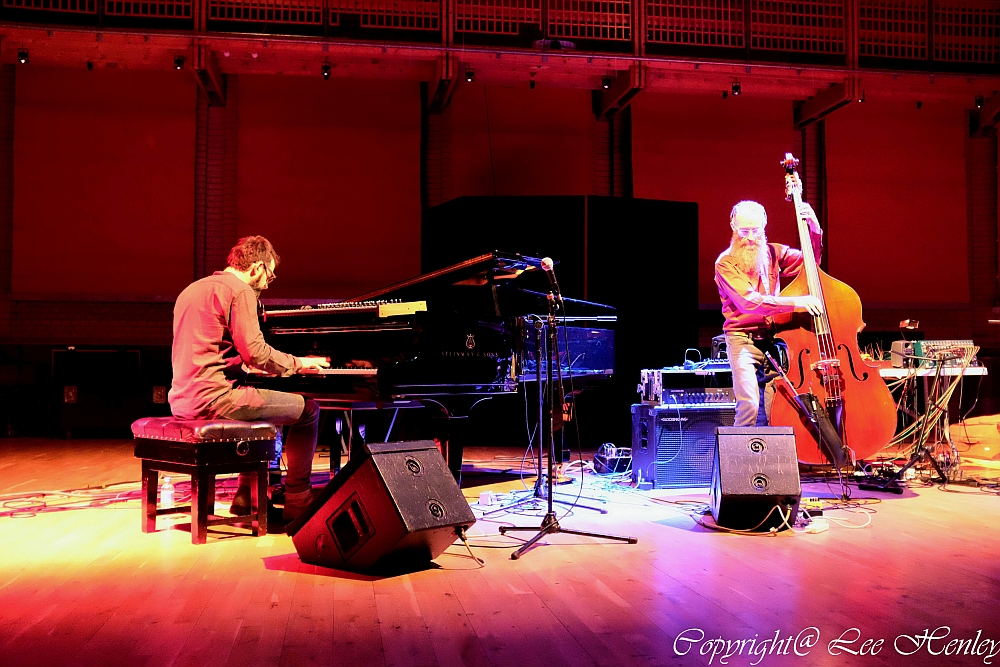 This show represented a couple of firsts for me – the first time I’d seen Neil Cowley Trio and also the first time I’d visited the CBSO centre.  The CBSO centre is fantastic venue, providing superb acoustics not only for the Birmingham Symphony Orchestra to rehearse, but as a great venue for smaller, more intimate performances, with it’s angled walls and it’s uneven brickwork intended to act as a giant diffuser.  No bass build up in the corners of the room, as there aren’t any!

There were around 100 people waiting expectantly for the performance – enough people to make it an “event”, but still sufficiently intimate to feel close to the performers.  The first half of the show was dedicated to the trio’s new album in its entirety – “Spacebound Apes”, a concept album inspired by the writings of Lincoln and marking something of a departure from the trio’s more usual style.  In fact, for the “Spacebound Apes” half of the show, the trio became a quartet, with a shadowy extra member lurking at the back of the stage and seemingly assisting with some of the electronic and synthesiser components of the set, which were also used by both Neil in addition to his Steinway grand piano, and Rex along with his double-bass.  “Spacebound Apes” paints a subtle, atmospheric, melodic and at times, dramatic landscape supplemented with a couple of more up-tempo, almost “pop/rock” offerings (“The City And The Stars” has a hint of Blur’s “Trouble In The Message Centre” to it with it’s relentlessly driving rhythm, and “The Sharks Of Competition”), with, as mentioned, the trio’s more traditional instruments complimented with large helpings of synthesiser-based accompaniment.

The second half of the show was dedicated to the trio’s “hits” (as Neil referred to them with more than a hint of self-deprecation on the few occasions he took to the mic to address the audience with humorous and good-natured patter).  Not being intimate with the band’s material by track name, there were plenty of tunes I recognised, but I will admit to having to resort to Googling them retrospectively to put a name to the tracks I recognised!  The well-known, smooth and melodic “Slims” got an airing, as did “His Nibs”, which Neil informed us was their first “hit”, and played live on the Jools Holland Show live back in 2008.  The encore to the show was the breathtaking and breathless “She Eats Flies” (for an idea of the intensity and sheer energy that is put into this track, take a look at this performance of the same track , delivered with incredible energy and utterly immersive!

Every track was performed with consummate skill and passion by Neil on piano, Rex on bass and Evan on drums. After the performance had finished, they were happy to mingle, chat and sign merchandise, so I have a nice signed copy of the “Spacebound Apes” CD, which I’m listening to as I write this, and very good it is too! 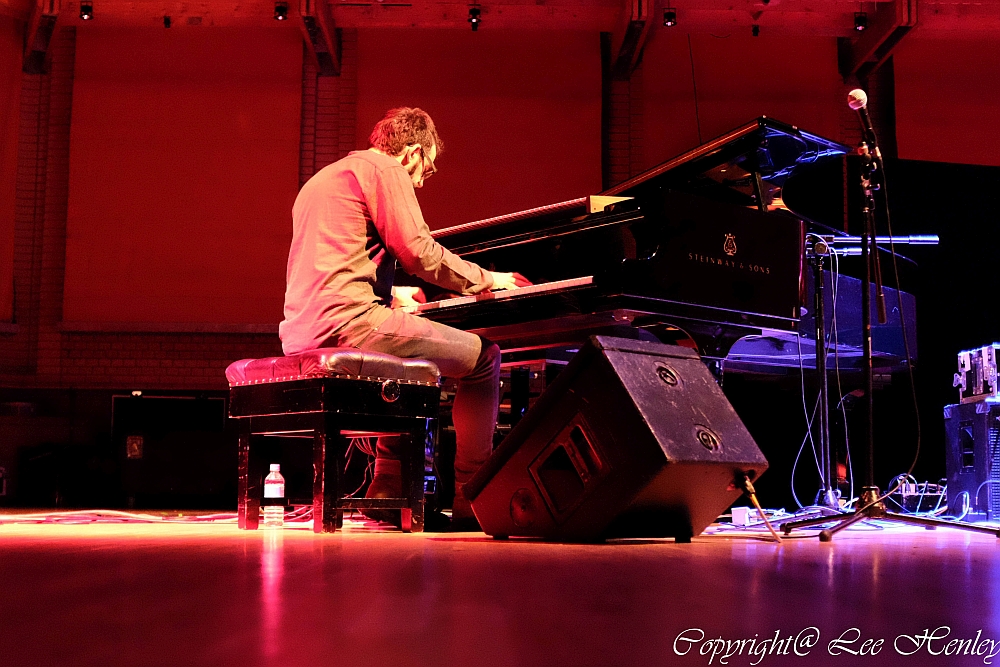 I have to confess I’m quite a big Jazz fan having over 100 Blue Note Vinyl albums and a similar amount of ECM vinyl records plus countless digital formats, however this is only my third Jazz gig, and the previous two were only last year! When the word got round that Neil Cowley was playing in Birmingham at a venue I’d not really come across I jumped at the chance.

The CBSO venue in Berkeley St, is quite simply put a wonderful venue, very high ceilings, wooden floors and a tiered seating arrangement which provided everyone with a decent view. The walls were brick with small facets present to aid in the room Acoustics no doubt.

After taking up residency behind the mixing desk the band came on stage at around 8pm and introduced the first half of the show, Neil Cowley took to the mic and indicated that they were going to play the Spacebound Apes album in its entirety, they had brought in another guy to work the electronics in the background which adds to the album somewhat.

The tracks seemed to flow effortlessly, Neil plays the piano with the utmost ease, Rex on upright Bass and occasionally on a small synth keep the pace going well, and Evan on drums was the sort of drummer that you could listen to all night, he played with minimal wrist action, but created such a crack on the drum skin it was quite deafening at times, but retained such a finite delicacy in the quite sections, overall most impressive.

At the intermission I managed to have a chat with then man himself, Neil comes across as a really nice chap, the kind of guy you could have a few beers with down the local pub, I did ask him who were his influences, to which he replied Errol Garner, for me Errol is a prolific pianist and the album A Concert By The Sea is a land mark album in the Jazz circle and one of the very first Jazz vinyl albums I brought many years ago.

After a brief visit to the bar the second half of the show was introduced by Neil as a Greatest Hits set, which injected further humour to the audience. The band returned to a trio for this set, and played through a realm of numbers with phenomenal rhythm and timing it was shear breath taking at times, the sound of the Steinway piano in the low registers is such a wonderful instrument and one I admire to anyone who can play at this sort of level. For the encore Neil mentioned that he had to get permission from his chiropractor, which seemed quite strange at the time, all was revealed during the number as Neil got up from the piano, at times mimicking Jerry Lee Lewis with a Whole Lot of Shaking going on!

The second set seemed to be over in the blink of an eye, I could have sat there all night, but alas the band called it a night. After the gig I managed to have a chat with the drummer, talking about some of the great rock drummers such as Moon and Bonham, turns out Bonham was the drummer that inspired him the most, which came across in the way he played the drums on the night.

One comment that I’d like to make is just how good Jazz musicians are, the playing is such a high standard, and getting the chance to see and hear them play directly in front of you is a bit like having the cd or vinyl record on at home, they really are that good, I couldn’t recall them missing a note let alone a beat all night!

All pictures used to illustrate this article are courtesy of Lee Henley (as copyrighted).