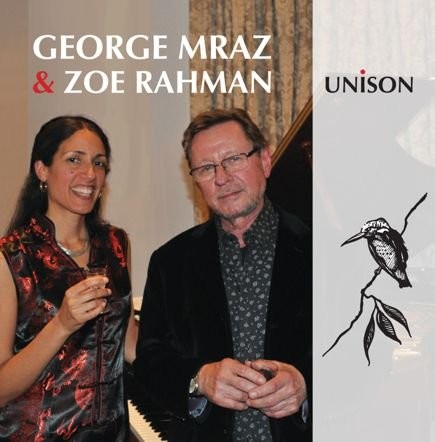 This recording keeps us close to greatest bassists ever. A subject which is worth alone a lot. George Mraz is one of them for sure. During his long career he played with the greatest Jazz artists that had ever walked on this planet. Zoe Rahman is one of the brightest stars on the contemporary British jazz scene, classically trained ,but deeply in love with Jazz. She posses remarkable technique and highly individual, vibrant style. A big part of this definitely comes from her Bengali heritage, which plays role in her artistic complexity ,and is probably responsible for this unconventional mix of vitality and temperament. These roots also blend into jazz part of her soul giving this charming personality all together.

This is a live recording of the private concert which took a place in Greville Lodge last year and now become a part of the series with the same subtitle. Material recorded comes from Mraz almost exclusively , except closing Love Theme from Cinema Paradiso by Morricone and Zoe’s own April Sun.

Let’s start from that one then, as this is a serious piece of music handled as a piano invocation with a space left here for a dialogue with other voice. It starts with a high volume and massive dynamic piano clusters bringing memories of some great piano performance, like for example Jarret’s improvised solos and has this open concept which makes it possible to expand and build in any direction , depends on interpreter imagination only. I can easily imagine myself how Zoe could possibly play it alone, knowing her other recordings, solo and in duets with clarinet.

Following two tracks are traditional Czech folk songs arranged by George. First one is a beautiful and nostalgic tuned curried on almost solo ,with just a last verse repeated as a duo conversation.

Second one turns into regular blues where Mraz’s bass keeps walking across the scale when Zoe is filling up the gaps with chunky and rich chords bringing to mind gospel intensity.

First four tunes {Mraz} are significantly different in the case of arrangement with rich modulations in the bottom octaves and showing clearly the difference between plunking four strings in rhythm section and using double bass as an equal partner for conversation with the piano and any other voice of course. Zoe is a competent partner to handle such a conversation in the way which is innovative and her very own at the same time making this venue really interesting Summit.

She is getting bassists intentions on the fly, really and responds with sensitivity enriching this which had been already written. I am not sure that but listening to this I really have a feeling that they didn’t have time to play it together and polish and rather chosen to rely on their own sensibility to make it happen. And they did.

Thanks to that this material has such a feeling of freshness and a taste of discovery. To close properly I left mentioned above Love Theme to the end. As this tune has such a different character. But also, unlike others,  that one is such a well known. Listening to how they are going through it makes me smile. It shows clearly their different approach than with the rest of pieces they presented here. It is like talking about a things we all know about in a completely honest and straight way. Just using own voices without a trace of forced creation, which could make the balance fall.

Such a lovely set , and it is easy to hear listeners enjoyment too. Those who’ve been lucky enough to attend.