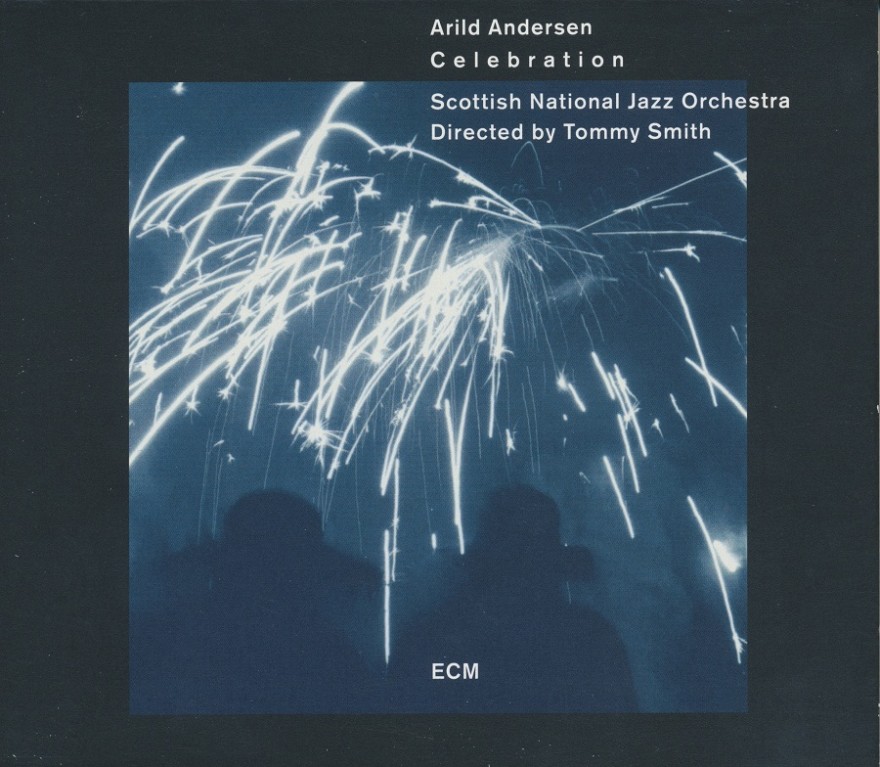 Recorded Live in 2010 in Scotland

This recording is special for few reasons. It contains 5 pieces which might be called milestones in ECM catalogue and one coming from pretty fresh début ,but it stands up in label’s tradition. Composed by artists who established long time relationship with Mr. Eicher. For this reason The Label commissioned to write special big band arranges for them to celebrate ECM’s 40th Anniversary.

Job had been left with Tommy Smith ,who recruited six further artists to participate in it , including pianists Makoto Ozone and Geoffrey Keezer, Øyvind Brække, Trygve Seim ( his Ulrikas Dans is mentioned above one off) and Michael Gibbs. Decision to make Arild Andersen a soloist in this project is unusual either if we think about “ Celebration” as about a homage to artists who remain living monuments of the modern Jazz. Watching that from long time collaboration perspective is giving us more confidence as those two had been long enough together to know perfectly what is going to work for them and what is not. And there is no surprise then the results are superb too.

Opening Dave Holland’s May dance had been originally issued on self titled Gateway, trio’s début recording in 1975. With Abercrombie’s guitar and J. DeJohnette partnering on drums it has his special taste which had many followers. Here in orchestral arrangement the speed had been kept as a hallmark of this composition, but main voice had been given to leader’s sax and responding or counter pointing brass. It was also interesting to hear the bass line played by Arild ,who’s voice is usually more rough and not that dancing like Dave’s phrases , but not on this occasion. Despite modern orchestration the light spirit of seventies had been kept on.

Garbarek’s Molde Cancicle had been gently slowed down, pure sax voice remained on the front but orchestral response made it more monumental than quiet hymn like it originally is. In 1991 such an aesthetic matched artist’s image more and having unique M. Mazur on drums partnered by E. Weber made a perfect accompaniment for his long and nostalgic voice.

C. Corea’s Crystal Silence remains one of this pieces which had been widely explored since appeared first time on artist 1972 recording in duo with G. Burton. Going on through further carrier ,it was a part of Return to Forever repertoire as well as a subject of solo performances, to be finally reborn and brought back to attention by latest 2008 The New Crystal Silence. It always had such a space that almost everything could be put there , so I was not surprised seeing it this program and I like Makoto Ozone arrangement for his respect for this space and avoiding temptation to put there too much.

T. Seim’s Ulrikas Dans ,the youngest piece among that selection ,arranged with Ø. Brække ,his band mate and trombonist gave them both nice opportunity to re-think the ideas. Originally recorded on 2000 Different River début the piece was played by quite a big ensemble too, so we have got here more like an orchestral rearrangement comparing to others. With lovely double bass introduction to motif and more room left for the other brass it now became even more dancing. On gentle orchestral cloud both voices – sax and trombone laying done comfortably dialoguing with precise and figurative bass. Contrast between smooth brassy texture and song of Arild’s instrument compliments and underlines the  brave new reading.

Following Independency, part 4 is Andersen’s original given to M. Gibbs hands to reshape. Originally recorded on Live at Bellville with Tommy Smith on tenor and Paolo Vinaccia on drums in 2008 as a simple trio, here as an orchestral arrangement gained completely independent blow ,but again without giving up natural flow and simplicity of the original score.

Closing My Song is probably the same story as Corea’s one. Recorded 1978 as a second set of Jarret’s European quartet became one of most recognisable tunes not only recorded by Jarret – Garbarek duo ,but presumably by pianist himself too. Often played in his later trios as well as honoured by other artists choice. Here, similarly as it was with previous tracks, it’s keeping again his charm completely. Remains the same simple melody with famous sax thrill now repeated by brass band and solo voices respectively. It completes almost perfect harmony which over all this years never needed any changes . I believe that I do not need to add it is “a must hear one” .