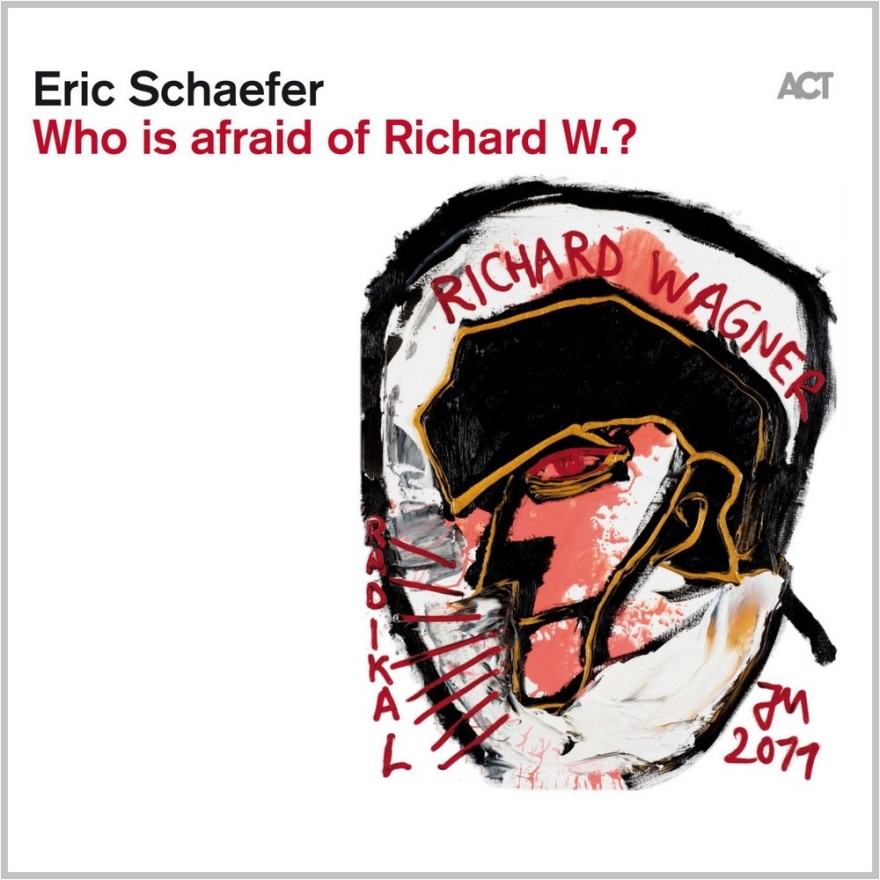 Eric Schaefer is a driving force behind young German Lions Trio [em] as some might know and “ Who’s afraid …” is his début recording as a leader. Here without Wollny and Kruse, with completely different make up. Accompanying musicians are: Tom Arthurs on trumpet & flugelhorn , Volker Meitz on organ, Fender Rhodes & keyboards and John Eckhardt on bass.

In 2013 we celebrating 200th Anniversary of Wagner’s birth  and I suppose there will be sooner or later another interesting recordings available. Her we got then Eric’s tribute to his great compatriot’s heritage. Eight out of thirteen compositions covering exactly Wagner’s operatic works, 1 is collective work, one after Liszt’s Dante Sonata and two leader’s originals .

Prelude to a Prelude, the opening one interestingly stays as co-written (Schaefer/Wagner) and appears to be an ambient version of original Wagner’s Tristan und Isiolde prelude, but completely reworked.

Starting with one of originals: Nietzsche in Disguise takes us immediately into the world of dub and reggae, both styles I never heard from Eric before. Next called Amazingly Slow brings completely different mood. It is slow indeed but not as much. Here we got lovely thrilling trumpet flying over organ landscapes and slowly building up into main chorus. Gentle percussion shimmering feeling up Rhodes approach nicely. Collective Love and Death is pure club aesthetic, art. of noise. Loops ,synthesised phrases and twisted chords finally bring gentle motif up, but it just disappears as quick as it flashed. I would say that one could describe a mystery of love this way, can not find Death there however. Dante Sonata works great with dusty electronic noises and wonderful lead of cool trumpet sound.

Jumping into the main W. Subject one couldn’t miss Valkyrie. You might know noting about W. but you probably have seen the scene from Apocalipse Now (F.F.Coppola) showing ride of furious choppers dropping napalm dead down. Here riders are more like glorious cavalry than enraged ride of female warriors. Among appears another beats from Lohengrin, Sigfrid mentioned already Tristan und Isolde and Tanhauser. They all stay close enough to originals in the case of melody and remain recognisable for those who knows these operas.

Different pieces had been given various treatments. Mostly it goes into dub~club like electronica, proving clearly that this music, re-read and revisited by sensitive souls like those chaps, still can be attractive to youngsters with no exposure to Wagner or Opera at all. I like a lot the way that trumpet arrangements cleverly mixed with keyboard sound-scapes and supported by leaders percussion background keep opening eyes for this music which has been not exposed before to non operatic fans.

Those last might also not like this. Base work is as discrete as you would never expect thinking about W. What touches me most is overall dancing character of this music, and it’s not because clubbing aesthetics, but because of what they found in those scores. With great sense of humour and without unnecessary populism they really manage to bring this music to masses and this is a fantastic achievement.

Listening in the past to Uri Caine’s re-jazzed classical music, just to find something to compare it with, this here is same individual and non compromise. Simply voice of generation. Caine’s surgeon reworks had been heavily criticised by purists at the time they hit the market 1st time and oppositely deeply phrased by those without any experience. Here again I can see the same dilemma, however not for myself. I can be also wrong.

Over ten years passed since Uri “profaned “ Bach, Vivaldi or Wagner daring to use mixes , loops turntables and DJ’s. Habits got changed and people become more familiar with such modest ideas. For this reason I like to see this album to be a great success as it truly deserves to be one. As always with ACT recording quality is astonishing and the way that live music had been mixed with synthetic sounds to create the complex image is smashing and joy to listen for stereo fans.