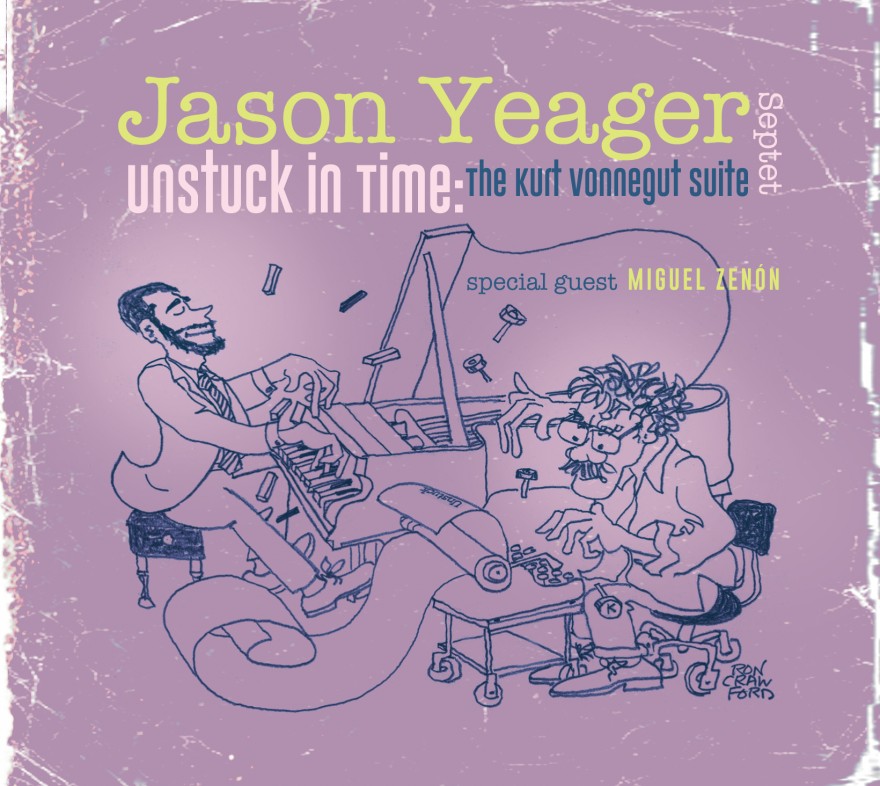 Due out via Sunnyside Records on the author’s 100th birthday, November 11, 2022, Unstuck in Time: The Kurt Vonnegut Suite features Yeager’s gifted septet along with guest soloist Miguel Zenón

“ [Jason] always impressed me with his talent, his curiosity and his desire to create his own music while really investigating the jazz piano tradition.” – Fred Hersch, pianist/composer, Doris Duke fellow

“This music is marvelous and I believe would have been right up my father’s alley.” – Edith Vonnegut, artist

While Kurt Vonnegut undoubtedly found his true calling as an author, writing such classics as Slaughterhouse-Five, Mother Night, Cat’s Cradle, and the short story collection Welcome to the Monkey House, he once speculated about another potential career. “What I would really like to have been, given a perfect world, is a jazz pianist,” Vonnegut said. “I mean jazz. I don’t mean rock and roll. I mean the never-the-same-twice music the American black people gave the world.”

The literary world can be thankful that Vonnegut stuck with the typewriter rather than the piano, but on the occasion of the great satirist’s 100th birthday, the pianist and composer Jason Yeager will gift him the next best thing: a new suite of music inspired by Vonnegut’s writings. On Unstuck in Time: The Kurt Vonnegut Suite, Yeager presents eleven new compositions vibrantly capturing the incisive wit and skewed vision of one of the 20th century’s most inventive and celebrated novelists. The album will be released by Sunnyside on November 11, 2022 to coincide with Vonnegut’s centennial, with a special release event on that date at the Vonnegut Library and Museum in Indianapolis, Indiana. It marks Yeager’s seventh recording as a leader, following his recent collaborative release Hand in Hand (Club44 Records) with spouse Julie Benko, who is currently starring as Fanny Brice in the Broadway revival of Funny Girl for the month of August.

Ever since he began pulling the author’s books off of his father’s shelves, Yeager has found vivid parallels between Vonnegut and some of his favorite musicians. “I consider Vonnegut to be a virtuoso writer, but one who also writes page turners,” the pianist explains. “He doesn’t complicate his language unnecessarily; it’s very pleasurable and easy to read his works. I see him as something of a Thelonious Monk figure in the world of fiction, because he seems to break a lot of the rules that I remember being taught in English class. It also took a long time for both of them to find wider acceptance and appeal. Monk is one of my musical touchstones, and Vonnegut has a similarly unique voice and is unapologetically himself.”

In writing the pieces for Unstuck in Time, Yeager crafted music that suggested that eccentricity and uniqueness. He assembled a stellar band able to bring his singular palette to life: multi-reedists Lucas Pino and Patrick Laslie, trumpeters Alphonso Horne and Riley Mulherkar, trombonist Mike Fahie, vibraphonist Yuhan Su, bassist Danny Weller, and drummer Jay Sawyer. In addition, the ensemble is joined on two tracks by alto saxophonist Miguel Zenón. “I can’t express what an incredible job these musicians did in pulling together really difficult music,” Yeager says. “At the same time they were all able to bring their own unique personalities as players to the project.”
In a curious side note, Yeager has more than a fan’s connection to his subject. The pianist’s grandfather and great-grandfather were architects based in Indiana during the mid-20th century, as was the writer’s father, Kurt Vonnegut Sr. For several years following World War II they were partnered in the firm of Vonnegut, Wright & Yeager. The design projects the firm worked on include the Federal Building and the Coca-Cola Bottling Co. building in Terre Haute, the State Library in Indianapolis, the airport in Columbus, IN, and school and university buildings in Terre Haute and Indianapolis.

These family ties were not the reason behind Unstuck in Time, however; in fact, Yeager didn’t set out with a complete Vonnegut suite in mind. The earliest composition on the album, “Blues for Billy Pilgrim,” was penned shortly after Yeager had read Slaughterhouse-Five, with the traumatizing and bewildering adventures of the novel’s chronologically confused protagonist in mind. Over the course of the ensuing decade, each Vonnegut work that he read seemed to spawn another piece of music until a full album based around the concept seemed the next logical step.

Yeager drew from across Vonnegut’s canon for inspiration: the stealthy opener “Now It’s the Women’s Turn” references the lesser-known 1987 novel Bluebeard, while the freewheeling, Caribbean-inflected “Bokonon” is named for the outlaw religious leader from Cat’s Cradle. The tender “Ballad for Old Solo” is dedicated to one of the aliens from Vonnegut’s Sirens of Titan, who are also the subject for the cosmic, album-closing “Tralfamadorian Rhapsody.” A Martian military march from the same novel is the basis for the parade rhythm of “Unk’s Fate.”

The chanted motto and carnivalesque motif of “Kilgore’s Creed” paint an off-kilter portrait of Vonnegut’s alter ego, Kilgore Trout, and “Rudy’s Waltz” pays tribute to the protagonist of the 1982 novel Deadeye Dick. “Nancy’s Revenge” offers a wish-fulfillment sequel to the problematic short story “Welcome to the Monkey House,” while “Blue Fairy Godmother” is a mock-patriotic ode to the possibly fictional spymaster of Mother Night.

The eclecticism of Unstuck in Time reflects the often uncategorizable nature of Vonnegut’s work; while he could be termed a satirist, a science fiction writer, a humorist, a fantasist or any number of other sobriquets, none are quite sufficient to contain him – which made him all the more compelling to Yeager. “A lot of my favorite artists are hard to place in a category,” he says. “Fred Hersch, for an example; he’s been a teacher and a mentor to me, and although he’s classified as a contemporary modern jazz artist, his music really encompasses different worlds of classical music, jazz, folk songs and many other areas. Miguel Zenón can encompass influences from the folkloric music of Puerto Rico to contemporary jazz to bebop. Stevie Wonder is another favorite who’s beyond category. I’m really drawn to artists like that.” 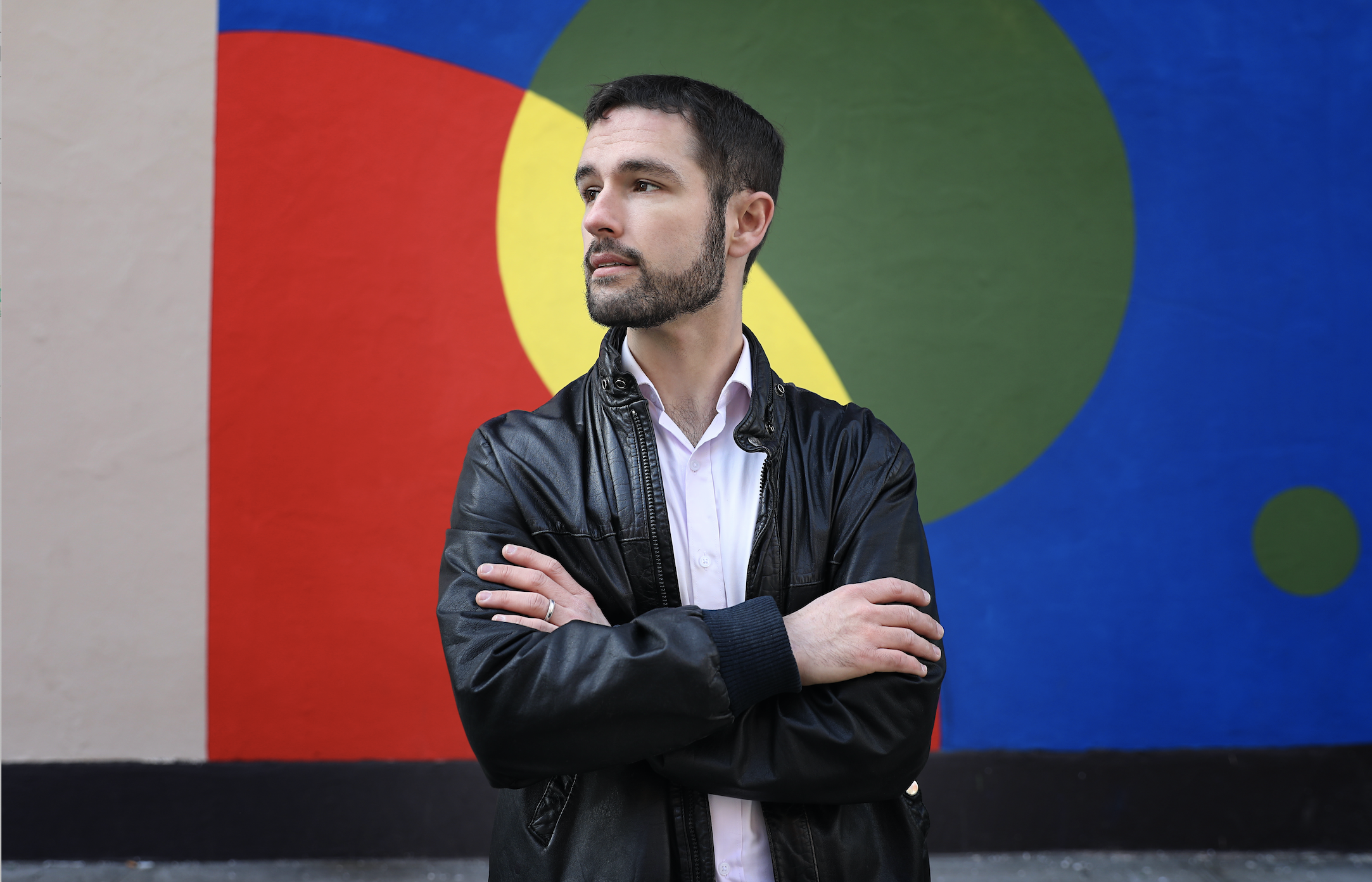 New York based pianist-composer Jason Yeager’s vibrant and colorful music embraces a panoply of influences, from Kurt Vonnegut and Thelonious Monk to Argentine and Chilean folk music, as well as the socio-political issues of our time. In addition to releasing Unstuck in Time: The Kurt Vonnegut Suite (Sunnyside Records), Yeager will releaseHand in Hand (Club 44) in August 2022, a duo album with his spouse, acclaimed Broadway singer and actress Julie Benko. Yeager’s past releases include All At Onceness with musical polymath Randal Despommier; United with violin virtuoso Jason Anick; and New Songs of Resistance, featuring reimagined nueva canción pieces from Latin America and original compositions. He’s played on five continents at such renowned venues as Carnegie Hall, Birdland, Smalls Jazz Club, Qintai Concert Hall, and the Panama Jazz Festival. A frequent accompanist and collaborator, Yeager has performed and/or recorded with such noteworthy artists as Luciana Souza, Ayn Inserto, Miguel Zenón, Greg Osby, Sean Jones, Ran Blake, George Garzone, Sara Serpa, Noah Preminger, Ben Monder, and Rudresh Mahanthappa, among others. A committed educator, he is Assistant Professor of Piano at Berklee College of Music in Boston.

All compositions by Jason Yeager