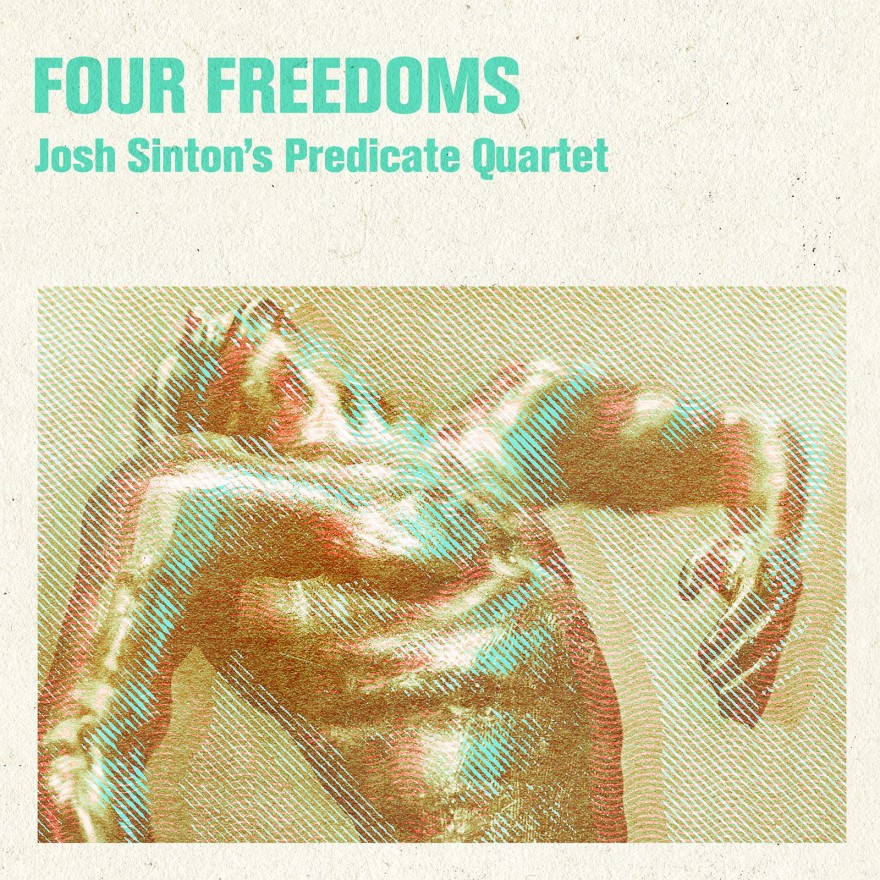 Woodwindist, composer and creative musician Josh Sinton caps off an extraordinarily productive and busy year with the release of 4 freedoms with Josh Sinton’s Predicate. The album, Sinton’s third release in 2022, features cellist Christopher Hoffman and drummer Tom Rainey – the original Predicate trio from their 2018 debut “making bones…” – augmented by Jonathan Finlayson on trumpet. It will be available October 28, 2022 via Form is Possibility Recordings (FiP)

Befitting the momentum Sinton has generated this year, 4 freedoms is a dynamically charged and compositionally rich record which marks a new highpoint in his work over the past fifteen years as a composer and bandleader.

Sinton began work on the album in the late summer of 2020 after receiving a surprise grant from the newly-formed Jazz Coalition. The grant came with a mandate “to create a new work within the spirit of documenting where you are, what you are thinking, and how you are coping at this very crucial time in our history,” a direct reference to the historical awakening Americans wrestled with in the wake of George Floyd’s murder.

“At the time I was thinking about the enormous debt I owe to the African-American community. Not just for their cultural achievements, but also everything they’ve taught me about survival, self-sufficiency, community and beauty,” says Sinton. In the midst of his contemplations, Sinton realized that his sense of musical counterpoint has been informed as much by the work of African-American masters like Henry Threadgill, Duke Ellington and James Brown as the works of J.S. Bach, Josquin des Prez and Arnold Schoenberg.

“Artists like Julius Hemphill had this magical ability to give every player a distinctive and self-contained melody, one a player could imprint their personality on, but it acted perfectly in concert with all the other melodies happening simultaneously.” Sinton heard this unique approach in all of his favorite African-American contrapuntists, and with it the sound of a political world he wanted to live in, where everyone can truly be themselves but still account for and live with other individuals occupying the same time and space.

“Thinking about how I wanted to free up the players in Predicate in the same way artists like Anthony Braxton have, I started thinking about how I can work for other people’s freedom, that maybe in fact that’s the most important thing I can do right now, to serve everyone I meet in their attempts at attaining freedom.” Sinton concretized this thought and realized he wanted to extend it to helping people attain four specific freedoms.

This unique perspective can be heard throughout 4 freedoms. Whether it’s the fearlessness required to play the thorny counterpoint of GATEWAY or the manifestation of the performer’s unique personality required by each of the lengthy soliloquies of VIOLETS, Sinton, Finlayson, Hoffman and Rainey nimbly create the sound of a compassionately anarchistic community. The love they feel for each other’s artistry is beguilingly evinced in the sly accompaniment they provide one another in BLOOD. This is a group that both understands their instruments’ traditional roles and seeks to create new roles for them and for each other.

Called “varied and exciting,” as well as “one of the most striking baritone saxophonists,” Josh Sinton has been heard with some of the leading voices of Brooklyn’s creative music scene since arriving in 2004. Whether with the bands of Anthony Braxton, Nate Wooley or Darcy James Argue or his own groups Ideal Bread or Predicate Trio, Sinton’s unique soundings on baritone saxophone and bass clarinet have lent an air of urgency and immediacy to every musical situation he has participated in. He is proud to count Ingrid Laubrock, Jonathan Finlayson, Tom Rainey, Jeremiah Cymerman and Guillermo Gregorio among his colleagues and looks forward to making music with many other musicians. In 2020 he was named “Rising Star” in the baritone saxophone category of Down Beat’s Critics’ Poll and earned a place in the baritone saxophone category every year since 2014.

June 3, 2022 – Josh Sinton, Jed Wilson, Tony Falco Adumbrations – Free, lyrical and inspired music, Adumbrations is an utterly unique documentation of the twenty-year-long friendship between Sinton, (baritone saxophone, bass clarinet, alto flute), Wilson (piano) and Falco (drums), who have known each other since their student days at New England Conservatory in the early aughts. Even though they have stayed in touch over the years, it wasn’t until August of 2021 that they finally came together and spontaneously created their debut recording. Adumbrations celebrates the importance of friendship and the solace and comfort it provides.

August 12, 2022 – Josh Sinton’s recording of Steve Lacy’s Book H of Practitioners – Baritone saxophonist Josh Sinton has been engaging with Steve Lacy’s first of three books of saxophone etudes for the past twenty years. After patient listening and investigation, he has recorded a deeply personal and exacting rendition of the six etudes Lacy wrote to challenge and inspire creative musicians and listeners of the twenty-first century.