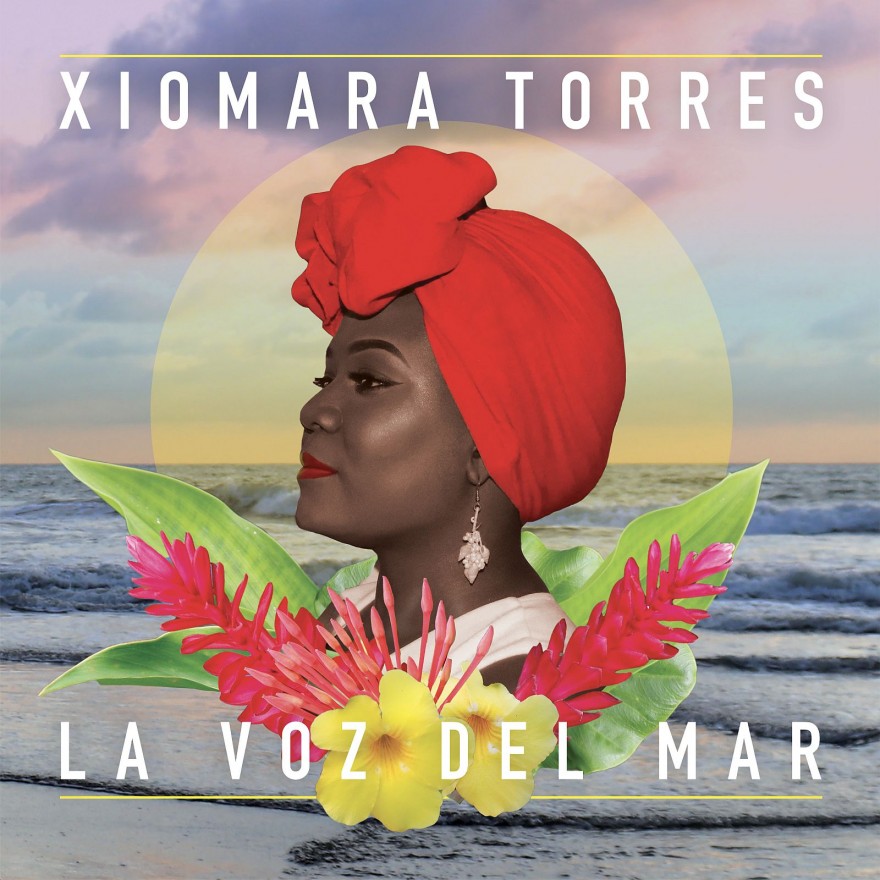 The recording celebrates the rhythms and songs of generations of Afro-Colombians living and making music on Colombia’s Pacific coast, and introduces the stunning singing of Torres, who hails from one of the region’s most illustrious musical families. Guest artists include John Benitez, Edmar Castañeda, John Santos, Wayne Wallace and Destiny Muhammad.

The musical seeds scattered across the Americas by the African diaspora took root far from the motherland, eventually bursting forth in an astounding variety of kindred styles, traditions and idioms. Some, like Cuban son, Brazilian samba and American blues, quickly reverberated around the world. But others have been overlooked and undervalued, like the enthralling rhythms and songs of Colombia’s Pacific coast, where generations of Afro-Colombians have nurtured a verdant array of music heard nowhere else in the world. La Voz del Mar introduces the stunning singer Xiomara Torres (pronounced See-o-mar-a), who hails from one of the region’s most illustrious musical families.

Spearheaded by San Francisco vibraphonist Dan Neville, a deeply skilled jazz musician who has spent years studying with master musicians in Cuba and Colombia, the album was created in tribute to the recently departed maestro Diego Obregón, Xiomara’s uncle, a revered marimba player, instrument builder and repository of música del Pacífico. Recorded in a Cali studio built for Obregón with funds raised by Neville via an IndieGoGo campaign, La Voz del Mar is part of an ongoing effort to share an extraordinary cultural heritage from a little-known region that’s overlooked even within Colombia.

Born and raised in the rural town of Guapi and based in Cali, Xiomara records and performs with some of the Pacific region’s most acclaimed folkloric ensembles, including Canalon de Timbiqui and Grupo Bahía. But La Voz del Mar is hardly a preservationist project. While drawing on her deep traditional roots, she also finds inspiration in a panoply of contemporary styles including salsa, bolero, cumbia and vallenato.

“This really shows my range musically and what I’m able to do artistically,” Torres said, speaking in Spanish via an interpreter. “The foundation of the project is rooted in Maestro Diego and all the music he gave us. We’re basing our artistic interpretation of these rhythms specific to the region without losing the root culture of the Pacific. It’s really about showing and pushing the full artistic range of Afro-Colombian music.”

“Cali is this place where there’s a unique confluence of folkloric Pacific coast traditions, salsa, jazz, reggaetón, vallenato and all these other styles,” Neville added. “It’s very unique and inspiring. I think the songs on the album reflect that. Xiomara is from Guapi and she sings with a certain swing that comes from folkloric music.”

Torres and Neville waste no time introducing their act local/think global vision with a salsified song by the Spanish Gitano flamenco group Los Chunguitos recalibrated as a rumba guaguancó, “Me Quedo Contigo.” The propulsive groove laid down by Puerto Rican Latin jazz bass legend John Benitez keeps the conflagration roaring throughout. By the end of the first line it’s clear that Torres possesses a voice that, like the title suggests, stays with you.

Part of what makes the album so thrilling is the quicksilver dialogue between rhythmic forms. Obregón’s “Tío” was originally set to a 6/8 folkloric rhythm from Colombia’s Pacific Coast known as currulao. The percussion-driven arrangement features the cununo, bombo, guasa and marimba, which carries the celebratory groove as Torres engages in call and response with the chorus. About halfway through the meter shifts into a 4/4 Colombian rumba with the dramatic entry of horns and bass. Xiomara composed the final verse, and the piece is dedicated to Obregón.

The role of music in Colombia’s Pacific coast provinces isn’t just for communal celebrations. It’s also a source of news and protest, like the anguished grito del corazón “Justicia,” a lamento written by Xiomara’s cousin Leidy Riascos about the brutal killing of a local 11-year-old girl. This song features the brilliant Colombian harpist Edmar Castañeda joining a delicate mesh of strings, flutes, glockenspiel and vibraphone (along with the traditional cununo, bombo, and guasa drums). Supplied by Bay Area’s Destiny Muhammad, the harp also features prominently in “La Puerta,” a sensuous late-night bolero.

The album includes two very different popular tunes. “Tarde Lo Conocí” is a ubiquitous Colombian vallenato, but Neville’s arrangement bends the groove in the direction of porro, a north Pacific coast feel from the Buenaventura/Choco region with a marching band/ party vibe driven by bombo, congas, and platillos (cymbals). And Lennon and McCartney’s “Let It Be” turns into a salsa anthem with the great East Bay percussionist John Santos buoying Torres’s soaring vocals. The closer is another gem, a gorgeous traditional tune from Guapi, “Filomena” reimagined with a rumba guapireña feel. Neville’s arrangement for bass, vibraphone and horns (including trombonist Adam Theis, the leader of the Bay Area’s prolific and well-traveled Jazz Mafia collective) offers Torres and the great Pacific coast folk singer Nidia Góngora a lush setting. In a final nod to Obregón, the arrangement interpolates a verse from his song “Con El Corazón” towards the end.

While La Voz del Mar only scratches the surface of the region’s musical riches, the album makes a compelling case that música del Pacífico stands alongside better known African diaspora blooms. It’s not surprising that the music caught the attention of trombonist Wayne Wallace, whose Patois label has released a series of Grammy-nominated albums that expand the Latin jazz lexicon. “There’s great synergy between folkloric music, modern jazz and salsa,” said Wallace, a tenured professor in the jazz studies program at the Indiana University Jacobs School of Music. “This album embraces the past without compromising it and looks forward to what music in the diaspora can be without losing its roots.”

As a vibraphonist, Neville found his way to the region via the marimba, an instrument that defines música del Pacífico. Struck by the combination of vocals and mallets on a radio broadcast, he sought to trace the sound to its source “and I was just drawn in from there. I’ve been curious about roots of the vibes, which obviously don’t come from Colombia, but that’s one important stop on the journey. I’m definitely inspired by the African balafon too. I’ve been very inspired by marimba music also, and Colombia is one of the most important sources of that.”

With the fifth largest Black population outside of Africa, Colombia has long neglected the Pacific coast region, which gets little attention from the central government. While Black arts from Brazil, Cuba, Haiti and Peru inhabit the international arena, Afro-Colombian culture remains undercover. La Voz del Mar seeks to change that equation.

“On the Pacific, our voices are so versatile,” Torres said. “We can sing jazz, opera, salsa, and can do it without losing the roots. I feel a responsibility to open new ways and possibilities, rooted in that tradition, but not stuck in only one genre. I want to recreate the identity of a Pacific coast artist containing lots of different things. This is a start.”