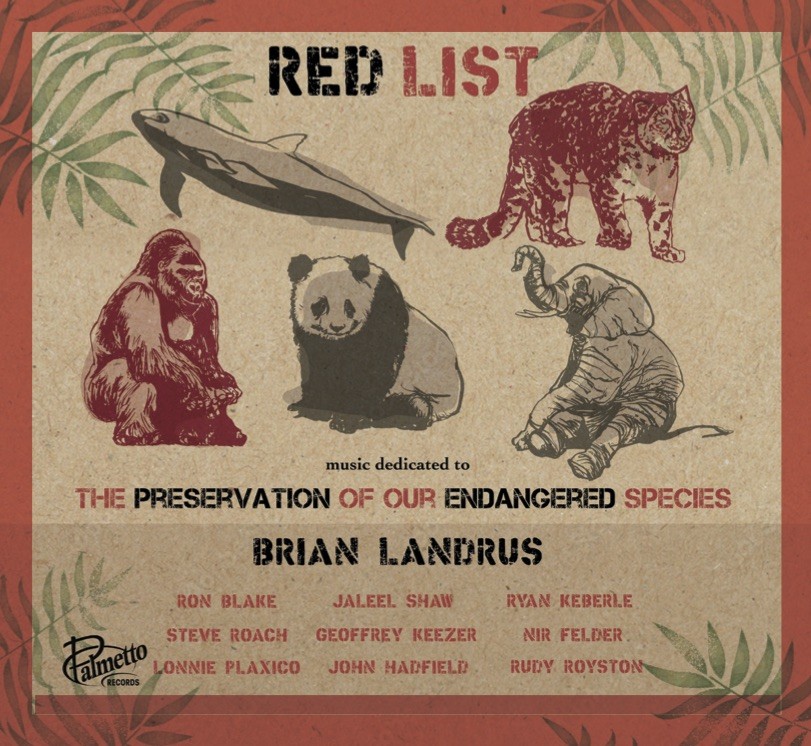 “A spectacular player…Red List has integrity in its compositional structure, its high-level personnel, its accessibility to groove merchants as well as those who revel in solo bonfires. It is inspired by (and helps fund) a worthy cause. And did we mention the siren call of that low woodwinds buzz?” – Britt Robson, JazzTimes

For his 11th album as a leader and second on Palmetto Records, baritone saxophonist and bass clarinet ace Brian Landrus gathered an all-star crew to help bring awareness to a grave matter of life or death on Red List: Music Dedicated to the Preservation of Our Endangered Species. As he wrote in the liner notes: “I recently began researching the many endangered species on our planet. It broke my heart to learn that there are only eight vaquitas, 67 Javan rhinos and fewer than 850 mountain gorillas left on earth. Spreading awareness of this tragic global situation is part of the impetus for this album.”

Hoping that Red List will help to facilitate “critical yet uncomfortable conversations about changing our global habit of destroying nature for our own gain,” Landrus is collaborating with the organization Save The Elephants to sound the alarm. He is joined by trombonist Ryan Keberle, keyboardist Geoffrey Keezer, guitarist Nir Felder, tenor saxophonist Ron Blake, alto saxophonist Jaleel Shaw, bassist Lonnie Plaxico, percussionist John Hadfield, trumpeter Steve Roach, drummer Rudy Royston and vocalist Corey King. Together they create entrancing grooves, lush harmonies, evocative interludes and epic crescendos, all in the service of Landrus’ thoughtful compositions that bring attention to the plight of 13 endangered species. (The Red List was compiled by the International Union for Conservation of Nature, the world’s most comprehensive information source on the global extinction risk of animal, fungus and plant species.)

“I’ve been an animal lover since I was a little kid,” says the internationally recognized Brooklyn-based musician who twice won DownBeat’s “Rising Star” Critics Poll — in 2021 for bass clarinet and 2015 for baritone sax. “I loved pigs, and once I found out bacon was pig, I refused to eat it. I became vegetarian when I was 12, and then later became vegan. It’s something that’s really important to me and I’ve always been part of organizations that try to do things for animals.”

Landrus organized a GoFundMe campaign for Red List, donating 20% of all proceeds and 100% of the profits to Save The Elephants, which has been helping to ensure a future for African Elephants for nearly 30 years. “I’m very happy to be working with them and thrilled that they’re going to use my song ‘Save the Elephants’ in some of their advertising and promotional projects,” he says. “This is certainly a crisis and I wanted to do something positive to help bring awareness to this cause.”

At the Red List sessions, Landrus conveyed to the musicians the sense of urgency he was seeking in the music. “I told them that I wanted the energy to be very intense. I wanted it to be like, ‘It’s now or never.’ Instead of it being relaxed, I wanted to transform the anger of the situation into something positive. So my message was: ‘Let’s realize the severity and critical nature of what’s happening and try to convey that in the music.’”

From the strong, anthemic opener, “Canopy of Trees,” to the grooving title track, to the tender solo bass-clarinet improvisation “Giant Panda,” to the suite-like “Bwindi Forest,” Landrus and colleagues exhibit consummate team play while delivering remarkably potent solos. On the uptempo romp “Tigris,” Landrus’ turns in a scorching bari solo and Shaw follows with a searching alto sax solo before guitarist Felder breaks out some fleet-fingered fretboard work to put an exclamation point on the searing jam. The dreamy waltz-time ballad “The Distant Deeps” finds the leader on alto flute and bass flute while Corey King delivers Herschel Garfein’s evocative lyrics with uncommon sensitivity.

The organ-fueled one-drop tune “Save the Elephants” deals in dub while “Mariana Dove” features Landrus’ effects-laden bass clarinet in an unaccompanied setting. “Congo Basin” features some highly conversational playing in the open-ended middle section along with potent solos from Felder and Keberle. The buoyant “Leatherbacks” is a laid-back, reggae-inspired number featuring King’s wordless vocals in tight unison with Landrus’ bass clarinet. Both Felder and the leader deliver dazzling solos here. Keezer turns in a cascading piano solo on the breezy “Upriver” and is followed in order by Landrus’ lyrical bass clarinet solo and Felder’s legato, chops-laden guitar solo. “Only Eight” is Plaxico’s solo upright bass meditation, while the upbeat groover “Vaquita” provides a nice solo vehicle for the leader’s bass clarinet and Shaw’s alto sax. The dynamic closer, “Javan Rhino,” is a slamming, organ-fueled romp that provides Landrus, Keezer and Keberle with plenty of room to blow.

Landrus said that all the musicians who came on board the Red List project were completely invested in the mission. “Before recording, I sent everyone the names of the songs, the animal that it was written for and the photos of the animals along with information about each one. Before we would track the music, we’d have a conversation about each animal. That was really spiritual. It was something that was completely different from every other session I’ve done.” 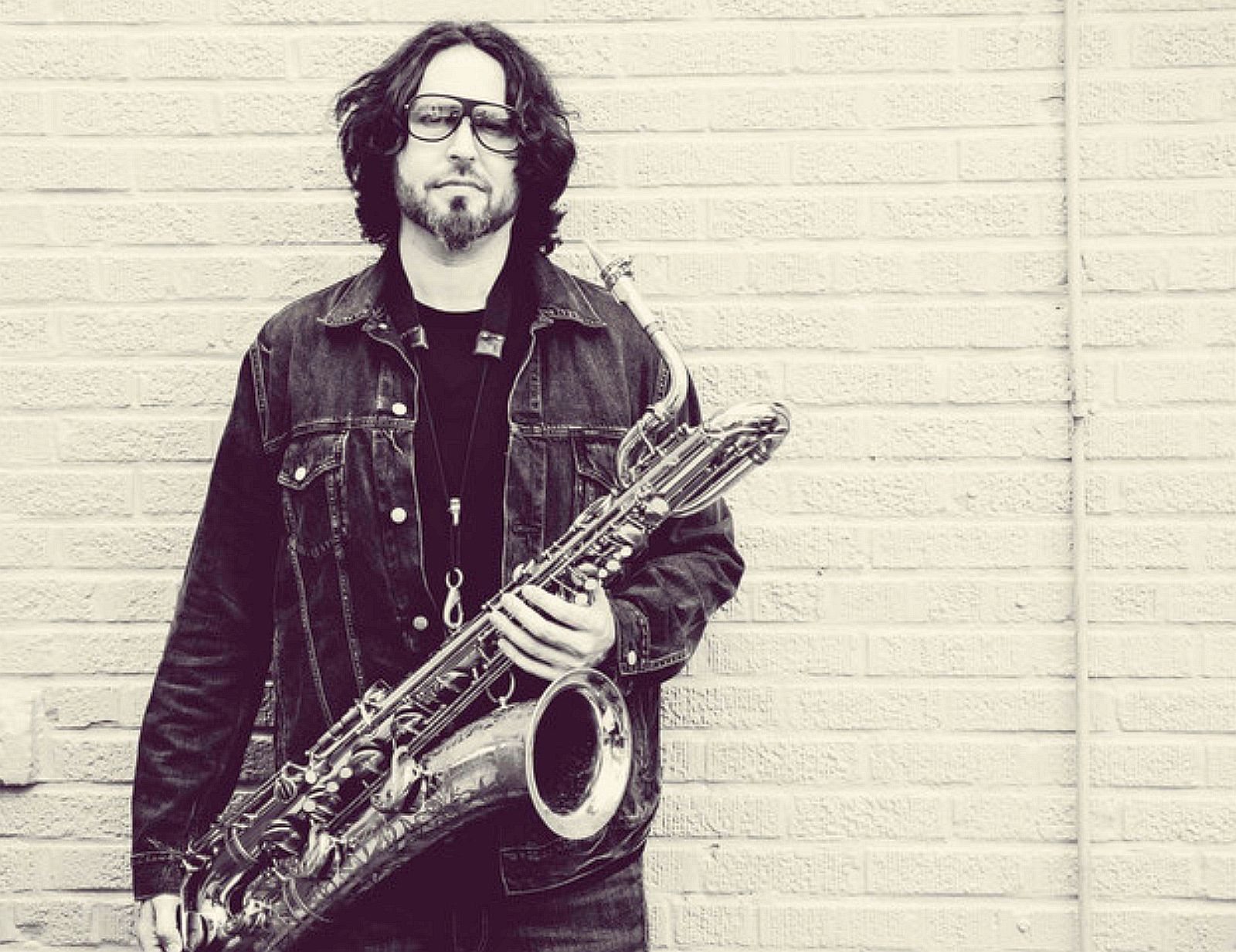 A veteran of the New York scene since moving to town in 2007 following four years at New England Conservatory in Boston, Landrus has performed with some of the world’s great jazz musicians, including Fred Hersch, Esperanza Spalding, Rakalam Bob Moses, Billy Hart, George Garzone, the Maria Schneider Orchestra, Ken Schaphorst Orchestra, and his teacher and mentor Bob Brookmeyer. He also toured with such national pop acts as The Temptations, The Four Tops, The Coasters, The Drifters and Martha Reeves. Landrus, who hails from Reno, Nevada, earned his doctorate from Rutgers University and is currently on faculty at the School of Music at California State University in Sacramento.

A prodigious player with a commanding voice on both baritone sax and bass clarinet, as well as a prolific composer, Landrus has made a string of potent statements as a leader on such albums as 2009’s Forward, 2013’s chamber-like Mirage, 2015’s austere and adventurous trio project The Deep Below, 2017’s sumptuous orchestral project Generations and 2020’s acclaimed quartet recording For Now. With 2022’s Red List, Landrus has created a low-woodwind manifesto—an urgent call to action.

“Moving ahead, I plan on working with different organizations and doing things that are much more important to the world than simply recording another album with great musicians,” Landrus says. “As much as that’s a wonderful thing to do, I feel like I’m at the age that I need to be more aware of our world and the reason to be here—leaving something more than just taking. I want to build awareness of the situation with these creatures. And if it changes a couple of people, then it’s all worth it.”