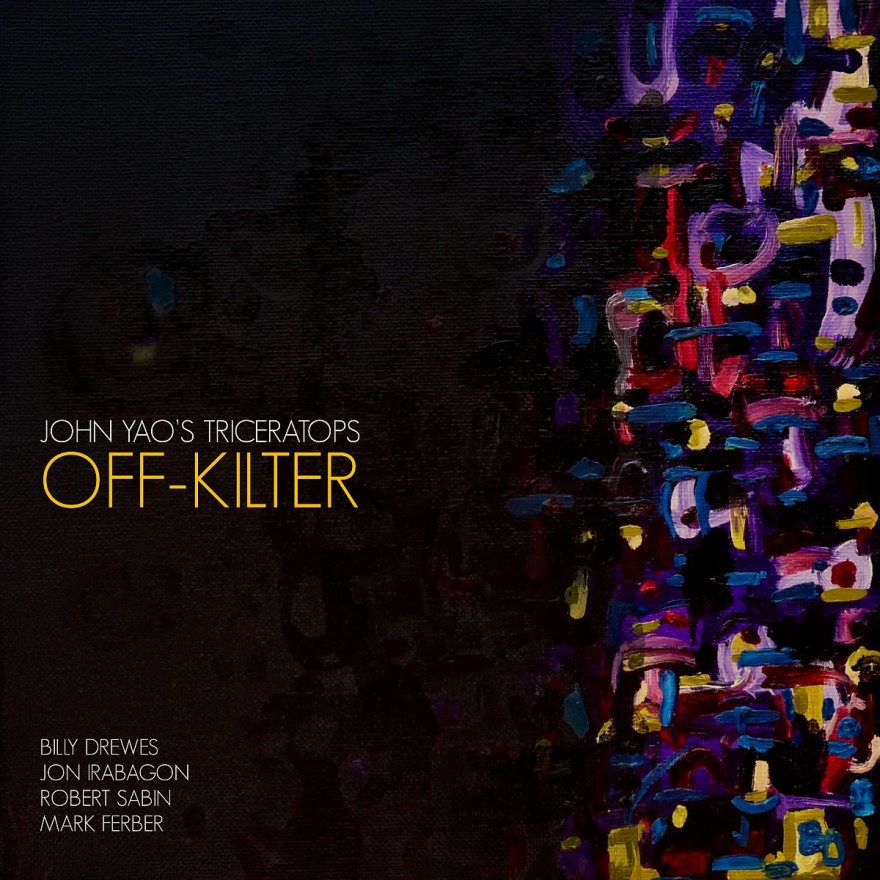 “[Yao’s] music swings, lopes and races forward. All five of the bandmembers share command of their instruments and a likeminded sense of joy that makes the album feel like an amusement park ride: energetic, exciting, yet safe.”  – Franz A. Matzner, All About Jazz

Musically scratching that prehistoric itch, trombonist/composer John Yao has once again unleashed his three-horn terror Triceratops on unsuspecting listeners with the band’s even more audacious second outing, Off-Kilter. The album title is an apt one, vividly capturing the exhilarating sense of risk-taking and disconcerting invention that make up this boldly unpredictable album.

Off-Kilter reunites the brilliant frontline from Triceratops’ 2019 debut, How We Do – saxophonists Billy Drewes and Jon Irabagon along with Yao himself – and drummer Mark Ferber. This time the chordless quartet is completed by bassist Robert Sabin, a longtime collaborator with Yao’s 17-Piece Instrument big band.

While How We Do featured some of Yao’s most envelope-pushing music to date, he deliberately stretched the limits even further on Off-Kilter. The compositions are at once daringly complex yet expansive and open, challenging these gifted players while offering limitless space in which to venture and discover.

“I set out to write music that was freewheeling and open,” the trombonist explains. “I tried to strike a balance between structured, complex compositions with loose, open space for improvising.  The music offers plenty of freedom and opportunity for interaction between the players.”

It doesn’t hurt in that effort to share the stage with two such unfettered saxophonists. Drewes is a veteran whose approach blurs the boundaries between a variety of styles; he came of age in 1970s NYC alongside the open-minded likes of Joe Lovano and Bill Frisell, with whom he recorded and toured in Paul Motian’s band. Irabagon is a prolific and irreverent player with a seemingly limitless collection of horns (on Off-Kilter he supplements his tenor with the miniscule soprillo saxophone). He’s worked with a who’s who of modern jazz including Dave Douglas, Mary Halvorson, Barry Altschul and Mostly Other People Do the Killing.

Important in any band, a rhythm section is especially crucial to a chord-less group like Triceratops, even more so given the liberties that Yao allows – even encourages – in the free-ranging improvisations throughout the album. Mark Ferber is a in-demand drummer who can be heard on more than 200 recordings, including dates with Lee Konitz, Gary Peacock, Fred Hersch, Don Byron, Ralph Alessi, Marc Copland and Brad Shepik. On Off-Kilter he combines a sly precision with a buoyant spirit that maintains a core of infectious joy in even the most chaotic of moments.

Sabin proves to be a perfect fit for the band, lending the tunes a robust spine whenever necessary but with a slippery, elastic sensibility that maneuvers empathically with the horns’ eccentric deviations. “Robert is a very open, exploratory sort of player,” Yao says. “His attack and articulation can be a little more aggressive and he takes a lot of liberties with the instrument in a way that I really enjoy. His open-minded willingness to explore uncharted territory, harmonically and rhythmically, is something that the music really called for.”

The album opens with the darting lines and erratic grooves of Drewes’ “Below the High Rise,” the sole piece not penned by Yao. The tune’s sharp angles give way to vast open space, setting the tone for the album as a whole by quickly pulling the rug out from under the undaunted musicians. They challenge one another as well – Yao’s blustery solo is unexpectedly pierced by Irabagon’s flitting, high-pitched soprillo, sending the trombonist off into abrupt, soaring detours.

The title of “Labyrinth” suggests the feeling of wrong turns and tight corners embodied by the piece, with sudden surprises around every corner from tautly coiled funk to stealthy grooves to raucous eruptions. It’s followed by the first of two interludes that shine a spotlight on Ferber, with sculptural drum solos over a bed of bass and horns. They’re prime examples of Yao’s compositional approach, which aligns this small, chord-less group with his big band in its use of intricate architectures and lush backgrounds.

“Quietly” is a wavering, sinuous ballad, while “Crosstalk” bursts into a swaggering funk out of some otherworldly car chase. “Unfiltered” is built on a foundation of rich, colorful three-horn harmony suspended over a floating time feel, whereas “The Morphing Line” is another shape-shifting composition atop the rhythm section’s muscular foundation. The title tune hurtles the album to an end at an untethered, breakneck pace.

“I love this band’s ability to go wherever everyone collectively or individually feels like they want to go,” Yao concludes. “That was such an amazing thing to be a part of. It’s something you can’t predict when you write a piece of music, but then you put it in front of players like Billy, Jon, Bob and Mark, and it becomes a thousand times better than anything you could have come up with.” 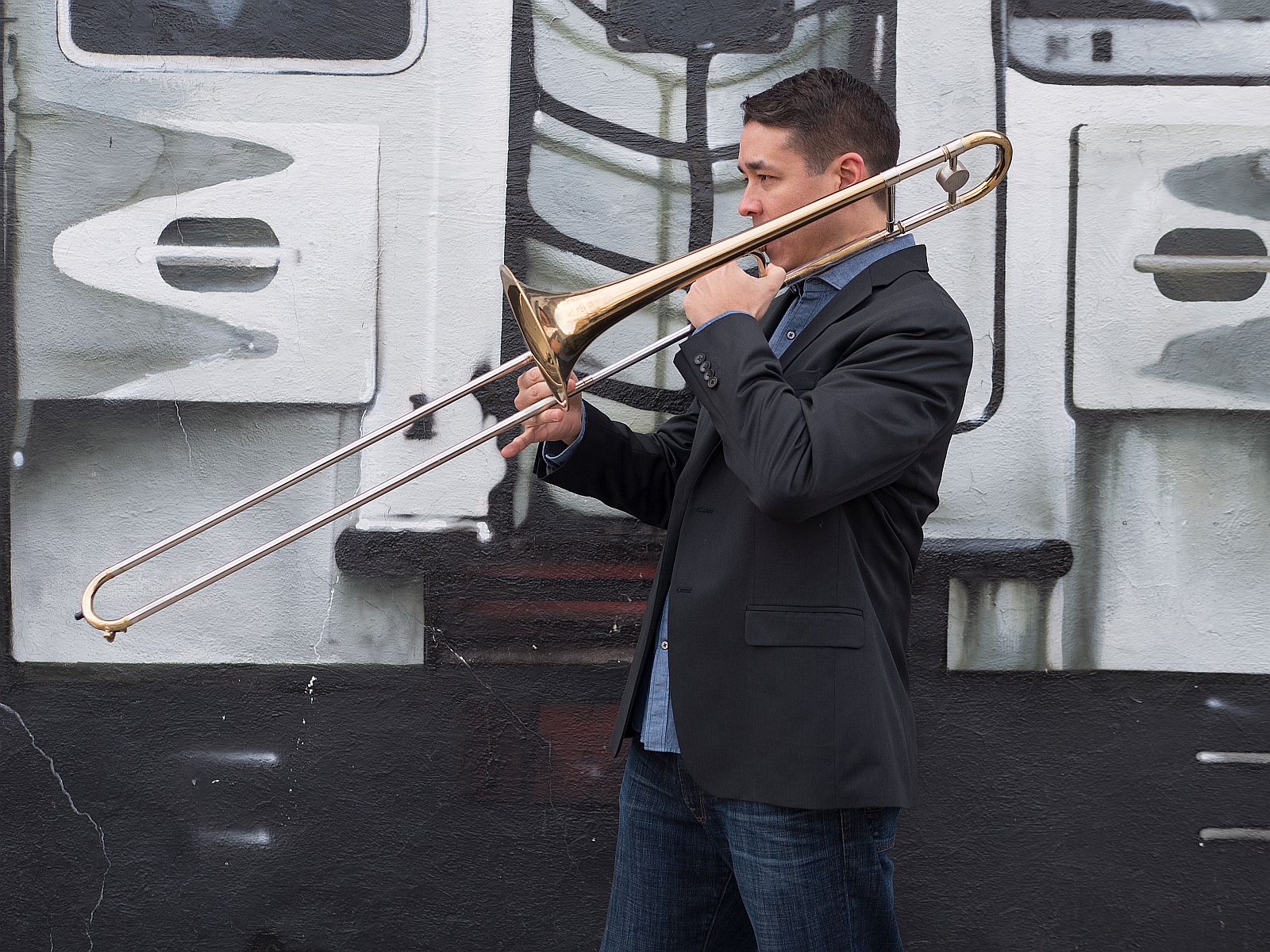 John Yao
For more than fifteen years, John Yao’s adept talent as a trombonist, composer and arranger has helped cement his place on the New York City jazz scene. All About Jazz calls Yao “an evolving artist who continues to grow at a rapid pace.” As a trombonist, he has worked extensively as a sideman for Grammy-award winning ensembles, such as the Vanguard Jazz Orchestra and the Afro-Latin Jazz Orchestra, and has also performed with Paquito D’Rivera, Eddie Palmieri, Danilo Perez, Chris Potter and Kurt Elling, among many others. As a composer, Yao has been commissioned by the Afro-Latin Jazz Orchestra, Jazz Orchestra of Philadelphia and the Arsonore Spirit Orchestra based in Graz, Austria. He has published numerous compositions and arrangements for professional and educational ensembles. As a bandleader, he has released four solo recordings, all of which feature his adventurous, boundary-pushing compositions for small groups and big bands alike. An in-demand educator, Yao serves as Assistant Professor of Trombone at Berklee College of Music and as Adjunct Professor of Music at Molloy College. He is an active guest artist and soloist at colleges and universities throughout the United States and abroad.