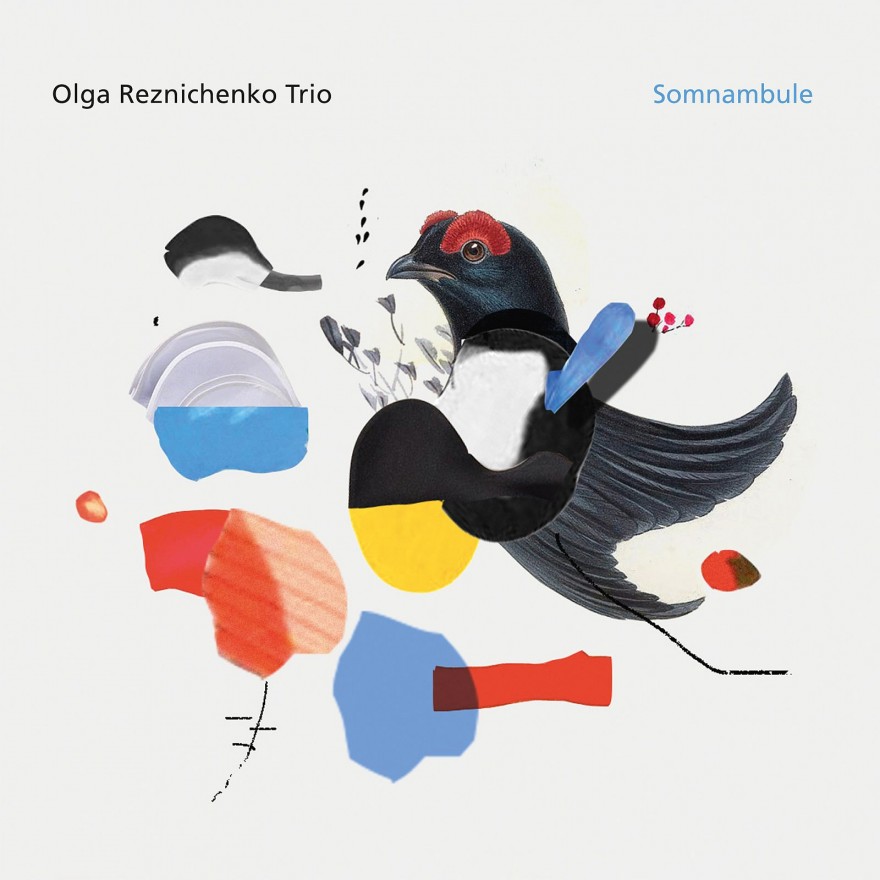 Whoever expects only calm, dreamy music because of the album title, Somnambule, will be surprised. Olga Reznichenko does not take the name of the album so literally, but rather in an associative way. “It’s not directly about sleepwalking, but about different nocturnal states. These also included semi-conscious phases in which my thoughts don’t come to rest or melodies that I played before still reverberate.”

The opener “Liquid Salt Sleeps Lost” is indeed quite lyrical with its harmonic moments, but the trio’s energy potential already flashes up in between the finesse. The following “Restless Stone Stops Motion” also begins quite poetically, but already in the main melodic motif Olga Reznichenko’s piano notes flow a bit faster, and Maximilian Stadtfeld intertwines the beats more dynamically. His individual accents inspire the pianist’s improvisations. As she breaks out ever further with a remarkable balance of elegance and determination, bassist Lorenz Heigenhuber also soars into inventive, spurring lines. After a good four minutes and a brief phase of contemplation, the proceedings take an unexpected turn. Suddenly repetitive figures dominate and Reznichenko lets them spin and dance more and more powerfully, finding an own expression between classical minimalism and Nik Bärtsch‘s Zen-Grooves. 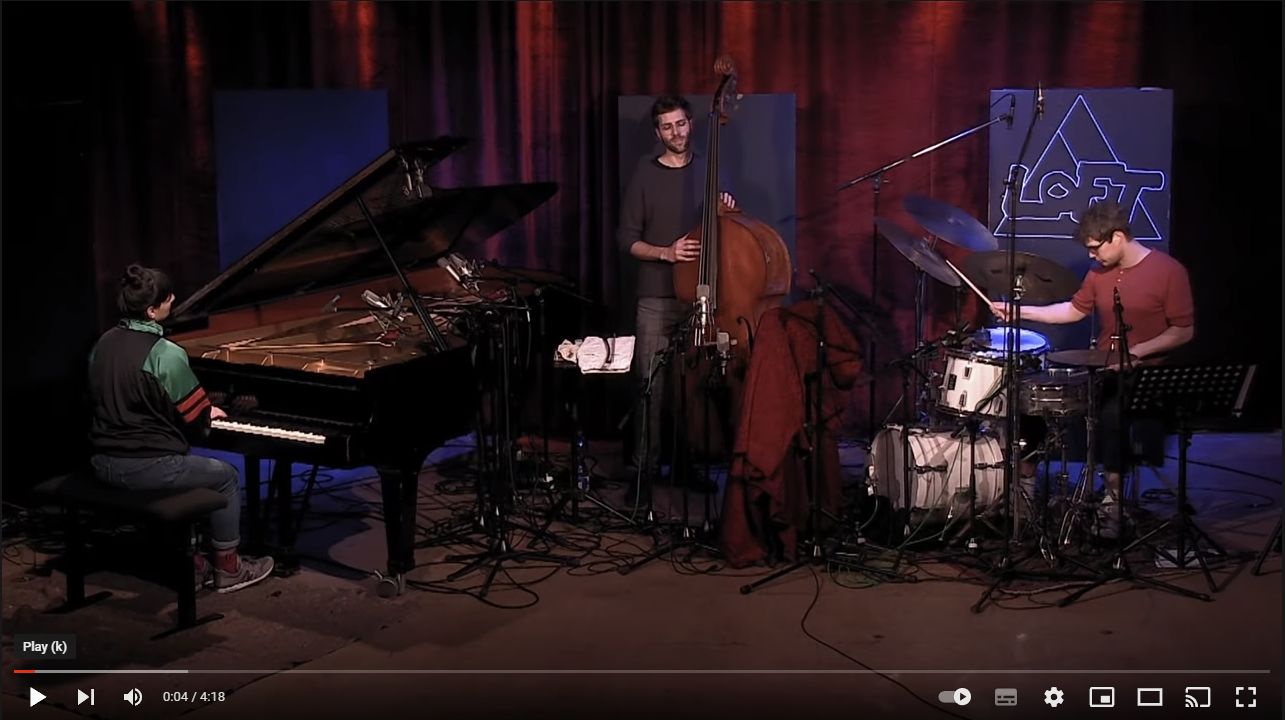 It is rare that a debut album impresses this much after the first two tracks and some 16 minutes of running time. The depth in Reznichenko’s playing, the oscillating of timbres and stylistic influences, the singing tone and sharp rhythmic detail of bassist Heigenhuber as well as Stadtfeld’s masterful, sometimes melodious, sometimes eruptive style of drumming create a unique sound and give Somnambule its special aura. While “Still From Below Found” is a bit calmer again, developing subtle suggestiveness, “One Hit Backlash” impresses with spirited, almost nervous and also quite free expressivity, without the band ever completely breaking the form. In the introduction of “Ground Most Must Take” Heigenhuber bows lightly squeaking notes on his bass, later the band increases the intensity one more time with purposeful densification. “Final Mirrors Facing Flames” captivates with rhythmic finesse as well as rolling piano cascades, which point to Reznichenko’s liking for Russian (late) Romanticism à la Prokofiev, Mussorgsky or Scriabin. Finally, “All After Nothing Left” with its mysterious harmonies and swelling dynamics sounds like new music for an old film by Roman Polanski.
When composing, Olga Reznichenko follows an intuitive rather than conceptual approach. Her pieces are based on improvisations that she plays alone and records. She then gradually distills the essence of her ideas. And not until then she shows the music to her accompanists: “I bring material to our rehearsals that I enjoy 100% and that is already worked out quite precisely.” Nonetheless, she is open to ideas that Stadtfeld and Heigenhuber bring in. The origins of Somnambule’s pieces date back to 2018. “Back then I had the idea of combining music and read narration, and I asked a friend if he could write something for that,” Olga Reznichenko says. “Thereupon he divided a dream into eight episodes and told me the stories of these episodes, and I wrote eight compositions for them. The titles he came up with for the eight chapters became the names of the pieces, and the music is the narration.”
Since then, she has repeatedly refined details, often after concerts. There had been several shows before the recording date on December 7, 2020, thus the band was wide-awake in the Loft Studio in Cologne, which resulted in an intuitive understanding in their agile interactions. The concentrated recording during the day was followed by a streaming concert in the evening at the same location. “I wasn’t feeling quite so fresh anymore, yet still we were able to build such a strong shared energy at the gig that a lot of it actually made it onto the record,” Reznichenko rejoices about the magic of the moment.
Olga Reznichenko was born in 1989 in the port city of Taganrog at the mouth of the Don River into the Sea of Azov. Encouraged by her musical mother and grandmother, she took piano lessons from the age of eight. Jazz concerts at school sparked Reznichenko’s passion for jazz and – against the will of her parents – she secretly began playing with musicians from this genre. Initially she studied at the conservatory in Rostov-on-Don, and in 2012 Reznichenko moved to Leipzig, where she studied with Richie Beirach for two years, then with his successor Michael Wollny. Especially the latter has recognizably inspired her playing. In 2018 she graduated with a bachelor’s degree, and in the summer of 2022 she will complete her master’s in jazz piano. 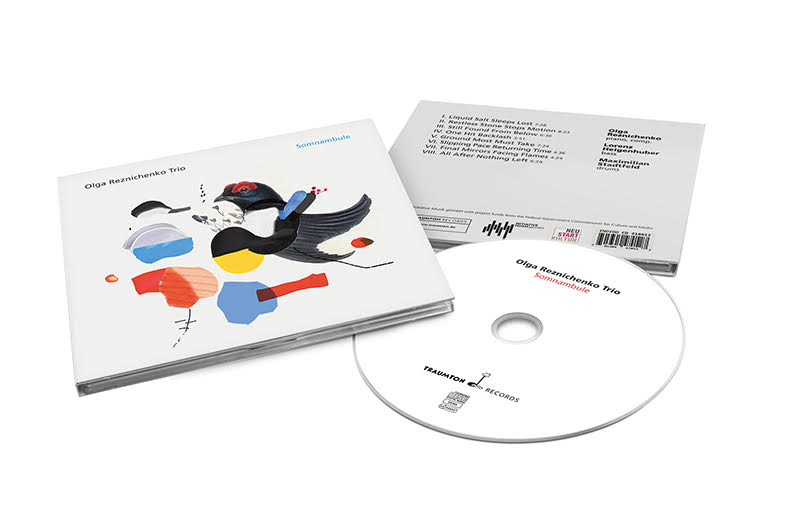 With her band Ylativ Algo, Olga Reznichenko won the 1st prize at the 40th Getxo International Jazz Festival in 2014, and in 2017 she placed 2nd with the duo Sofia & Olga at the Sparda Jazz Awards during the Jazz Rally Düsseldorf. In the same year, the two musicians released their debut album Shells in Motion. In 2018, Reznichenko played at the festival Leipziger Jazztage in the Matthew Herbert Brexit Big Band. She is also a member of BREU with Maximilian Breu, Andreas Dombert and Andreas Lang, and part of A Word Is A Swallow with Theresia Philipp, Robert Lucaciu, Philipp Scholz. In 2021 Reznichenko became a member of the ensemble Spielvereinigung Süd. Since 2021 she is a program curator for the Leipziger Jazztage and part of the organizing team of the Mjuzik Festival in Leipzig.
Olga Reznichenko founded her current trio for her final bachelor’s concert at the University of Music in Leipzig. The resulting repertoire celebrated its public premiere in a three-night engagement at the Hot Club in Lisbon. At the same time, Max Stadtfeld and Lorenz Heigenhuber, in a trio with vibraphonist Volker Heugen, were awarded the Newcomer Award of the City of Leipzig 2019. Earlier that year, Stadtfeld received his international “accolade” as drummer of Michael Wollny’s live project Bau.Haus.Klang (with Émile Parisien and others), which excelled at the opening of the Bauhaus Festival at Berlin’s Akademie der Künste (with broadcast on Arte-Live), at the London Jazz Fest and the Leipziger Jazztage. Heigenhuber meanwhile worked with Louis Sclavis, Enders Room, and was engaged for various theater productions, including “Die Räuber” [The Robbers] (Theatertreffen Berlin 2017).
“I’m not such an analytical type,” Olga Reznichenko explains cheerfully, “I like to just let go of all thinking when I play.” It is the mixture of profound knowledge and clear visions, of moods and timbres for instance, that feeds Reznichenko’s creative drive. With her band, she combines complex harmonic and rhythmic structures, delicate and powerful moments, and captivating melodies to a personal aesthetic that makes Somnambule an outstanding debut album.