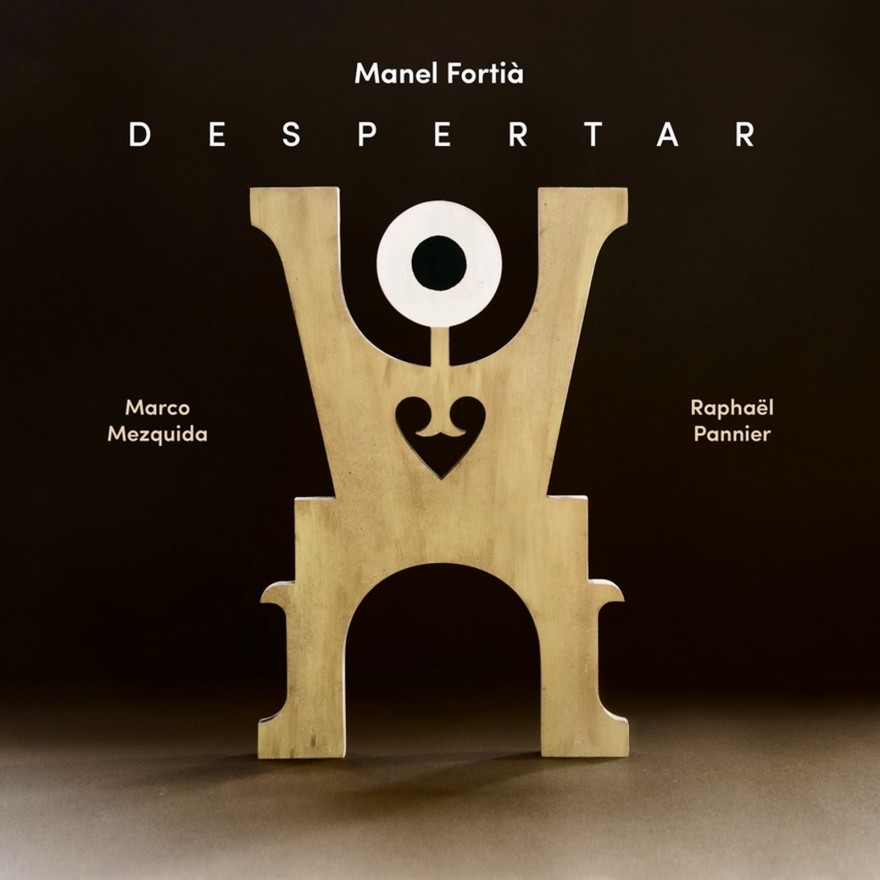 “Despertar is a gorgeous declaration of emancipation from the assumptions that sometimes are erroneously made about Spanish jazz. This is fresh thinking and beautiful playing from a trio that is led by the extraordinary bassist Manel Fortià. His bass sound is huge and fluid and his bandmates are almost telepathic in their interaction with it. This is an incredible outing for a young bandleader and should firmly establish Manel as a voice to be heard for years to come.” – Grammy Award-winning pianist and composer Arturo O’Farrill

“Wonderful interaction and beautiful compositions are highlighted on this recording. I hear the influence of Spain throughout. This is a great trio which will be listened to by serious musicians and enjoyed.” – NEA Jazz Master, saxophonist and composer Dave Liebman

Barcelona-born bassist Manel Fortià bridges his Mediterranean and Spanish roots with the sounds of modern New York jazz on his trio album Despertar, available May 12, 2022 via Segell Microscopi/Altafonte Distribution.

Meticulously composed and produced by Fortià, Despertar presents a musical self-portrait based on a selection of spirited originals, all inspired by his experiences while living in New York City between 2016 and 2020. The composer creates a mellow and personal music which touches on influences as varied as Charlie Haden, Keith Jarrett, Maurice Ravel and Paco de Lucía, among others.

Fortià’s extraordinary trio features two of the most prolific European jazz personalities of the new generation. Multi-award winning Spanish pianist Marco Mezquida (Lee Konitz, Dave Liebman, Bill McHenry, Chicuelo, Noa), understands Fortià‘s music deeply and performs with elegance and dynamism. The connection between these two artists and their ability to listen deeply was showcased on their critically acclaimed 2015 duo album My Old Flame. Rounding out the trio is the revelatory French drummer Raphaël Pannier (Miguel Zenón, Aaron Goldberg, François Moutin) with whom Manel recorded the 2018 album Bulería Brooklyniana mixing Brooklyn jazz underground with flamenco. Joining them on that album was pianist Albert Marquès. With his huge palette of textures and sounds, Pannier brings the music to another level, infusing vital and foundational energy into the rhythm section.

“This album is very important to me because it reflects one of the most transcendent moments in my artistic life. I feel that living in NYC changed me tremendously and I grew a lot there,” Fortià says. “It is also the first time I recorded a full album featuring all my compositions. That I can share playing them with two of my favorite musicians with whom I have a great connection personally and musically, is like a dream come true.”

The Spanish title “Despertar” translates into “awakening,” which references the last tune of the album, while, in contrast, the first one is called “Dormir” (“fall sleep”). Between these tracks we are on a dreamy journey of vital experiences, traveling to different places and moments in a very imaginative way that brings about the magic of Mediterranean culture.

Like Charlie Haden, Fortià is an extremely melodic and open-minded player, executing performances on the upright bass with deep sound and precision, dropping guideposts, marking turns and grounding the journey while adding the occasional weighty statement on his compositions. His sound on the instrument is his major virtue, easily recognizable as his own. He can play a variety of styles and rhythms without losing his personality. Mellow and powerful, straight and flexible, sober and free, laid-back and energetic… all of these contrasts coexist in his playing. Inside his music we can find New York modern jazz but also some Mediterranean colors, hints of flamenco as well as European classical influences.

Between the Bach choral-inspired opener “Dormir” and the powerful meditative suite “Despertar,” we have seven different episodes of an exciting dream unfolding in NYC. The energetic groove of the JFK AirTrain (“Circular“) drives us from the airport to the melancholic, impressionist neighborhood Astoria (“Saudades“) where Manel lived while in New York. Then we travel to Harlem with the beautiful gospel-inspired “Espiritual,” an homage to Black American music, where Manel‘s solo travels from the bottom of his upright bass to heaven. Next is the deep ballad with a Spanish touch called “El Día Después,” dedicated to La Rambla de Barcelona where there was a terrorist attack in 2017 while Fortià was in New York, suffering in the distance. We then travel to the iconic Grand Central Station at rush hour which is represented by the frenetic and dynamic song “Crescente.” A calm after the storm arrives courtesy of two beautiful tunes with South American flavors: “Aires de Libertad” is dedicated to Prospect Park, an area of Brooklyn where historically a huge group of jazz musicians have been living, and “Simple” to the Jackson Heights neighborhood in Queens, where we find a huge Colombian community. This musical “American Dream,” is Manel’s self-portrait of life as an immigrant artist during his time in the United States.

Recorded and mixed at El Local Studios (Girona, Spain) by Marc Piña and mastered at Sear Sound (NYC, USA) by Grammy-Award winning sound engineer Jeremy Loucas, Despertar has the perfect balance of sounds between Europe’s beautiful harmonies and America’s energetic rhythms, bringing us on a journey of different colors and contrasting climates.

The striking album art highlights original objects the Argentinian artist Fran Pontenpie conceptualized and built after listening to the music and then photographed for the album. On the cover is a wooden upright bass bridge transformed into a human who is awakening from the bass. On the back are four clouds created from bass tuners. Inside is a plant that has three pairs of eyes, for every member of the trio. Pontenpie’s visual contributions enhance the listening experience and make the album a unique piece of art.

Manel Fortià
Barcelona/NYC-based upright bassist Manel Fortià is in a fruitful moment of his artistic life. His melodic sense, rhythmic precision and creativity have made him one of the most unique and original musicians of the new generation.  In addition to leading his own projects, Fortià is a versatile and in-demand sideman.

In addition, he has appeared in more than 50 albums as a co-leader and as a sideman, including Estándares with Grammy Awarded pianist Chano Dominguez and Antonio Lizana, My Old Flame in duet with Marco Mezquida and Bulería Brooklyniana with Marquès/Fortià/Pannier trio.

Fortià has been recognized with multiple awards such as the “Jazzer 2020” from the Jazzing Festival of Barcelona. He has also been a finalist at “Terra i Cultura 2019” with Magalí Sare, and a three-time finalist at Castelló Jazz Contest (2012-2014). He won the Jazz Fusion Contest (2013) with Tak! In addition, he combines a performing career with his teaching role at the prestigious ESEM – Taller de Músics in Barcelona and in the Jazz Department of Girona Conservatorium.

He also has been involved with social justice music projects happening in the U.S. including Freedom First (Justice for Keith Lamar), which fights for human rights and equality, led by the musician-activist Albert Marquès featuring Arturo O’Farrill, Salim Washington, Caroline Davis among many others.