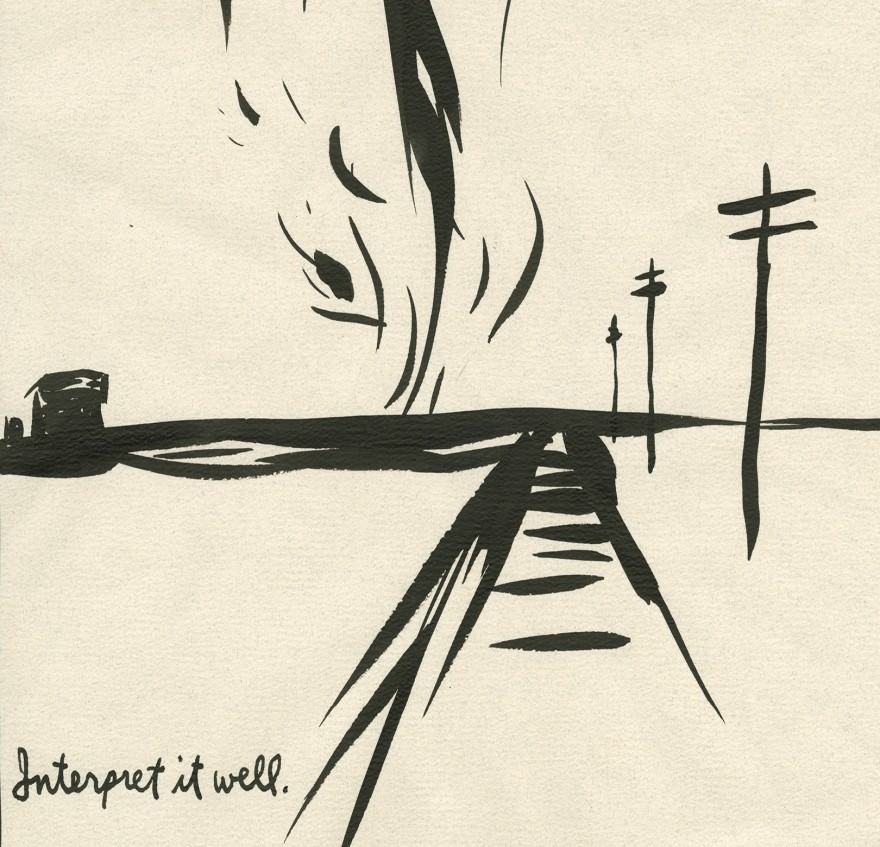 ★★★★ “Every track has an architecture, a flow, a journey, a story…again and again one can admire and be touched by the ability of all four of these musicians to make the pacing, the story-telling all feel as natural as breathing.” – Sebastian Scotney, The Arts Desk

Interpret It Well, the new album featuring drummer/vibraphonist/composer Ches Smith and his all-star quartet with guitarist Bill Frisell, violist Mat Maneri and keyboardist Craig Taborn, is out Friday, May 6 via Pyroclastic Records

Interpret it well,” reads the script text in Raymond Pettibon’s mysteriously evocative drawing. A few thick black ink strokes describe an enigmatic landscape – the telephone poles, the railroad track and the building in the distance seem obvious enough as markers of desolation, but the swirl of lines on the horizon are more ambiguous. The steam from an approaching train? An oncoming tornado? Hope or dread, connection or destruction, all depend on interpretation.

It was that sense of openness and exploration, in fact, which intrigued Frisell in the first place. The guitarist attended a Ches Smith Trio concert in late 2018, following which he contacted the drummer with questions about the compositions. “Bill was very nice about the gig – effusive, actually,” Smith recalls. “He told me that he felt the tunes were accessible but challenging at the same time. There’s something about the way Craig and Mat and I play together, where we extrapolate to the max but the music feels like the pieces. So I thought Bill might be interested in playing them with us.”

It took more than a year for schedules to align, but Frisell was finally able to join the trio for a performance in early 2020. The combination gelled immediately – “Bill felt like a natural part of the band,” Smith writes in his liner notes – but the demands on everyone’s time meant that a recording with all four would prove next to impossible to book.

Everyone knows what comes next – the pandemic happened, and suddenly time was all anyone had. Smith reworked his compositions with the newly forged quartet in mind, and the band went into the studio that October when life began to resume some semblance of normalcy (for the first time, at least).

The results are absolutely striking. As he did for the trio incarnation on The Bell, Smith writes compositions that are minimal but indelible; skeletal enough to allow these remarkable improvisers space to roam far afield yet so vivid that the core image is never lost amidst the daring embellishments.

Which brings us back to the Pettibon drawing – what Smith’s music shares with the artist’s work is that idea of a distinctive landscape evoked with a few sketchy lines, with vast stretches of the mysterious left in the spaces between. “There are definitely maximal moments on this record,” Smith says. “But when I think of the music in my head, it’s fairly minimal. I like a lot of music where nothing seems to be happening.”

That may be true of the music on Interpret It Well in broad terms, but listen closely and a great deal is happening just beneath the misleadingly placid surface. The album is bookended by “Trapped” and “Deppart” (“Trapped” spelled backwards), two alternate versions of the same brief piece, a haunting, repetitive melody that slowly accrues power one voice at a time. “That’s one of the most minimal things I’ve ever written,” Smith says. “It’s simultaneously a bar, a melody and a chord, and people can approach it however they want.”

The title track begins with Smith’s tentative, querying vibraphone, with the other voices gradually gathering around him like a deepening fog. The picture eventually comes into focus only to give way to Taborn’s stuttering, agitated solo, which ushers in the urgent, ferocious final section. The piece has been inspiring to artists outside of the band as well – artist/filmmaker Frank Heath, whose works have been described as “poetic interventions into systems of communication, information and understanding,” has created a new film to accompany “Interpret It Well.” The piece will be available May 6 via the Ches Smith and Pyroclastic websites. 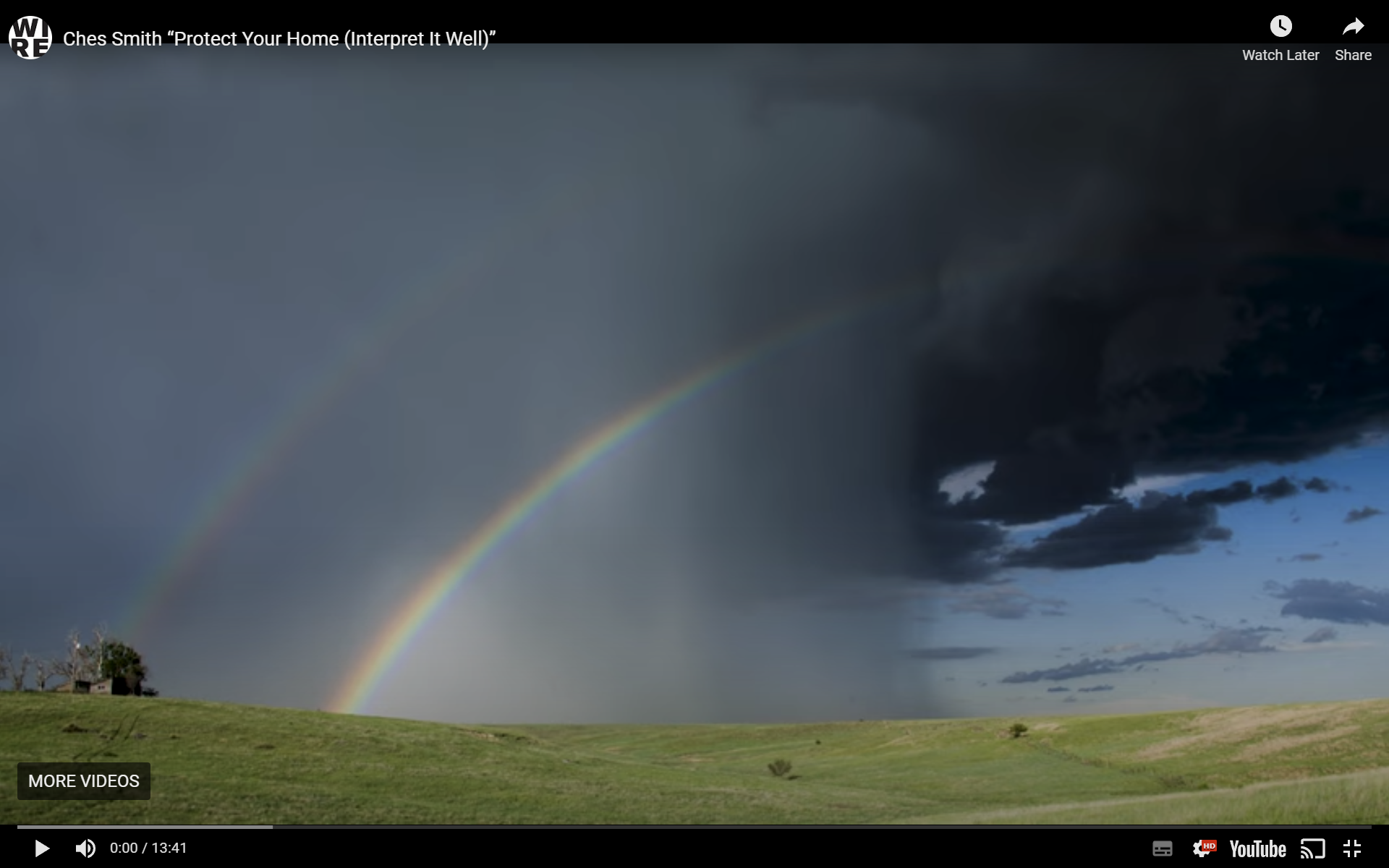 Frisell contributes a high lonesome intro to “Mixed Metaphor,” soon matched by Maneri’s forlorn bowing. Smith (on vibes) and Taborn then take over for a labyrinthine duet, ultimately leading into a spiraling vamp. The sparse “Morbid” is a ballad of sorts, an elegy unfurling at an achingly slow pace, luxuriating in the evanescent sound while all four take care not to shatter the exquisitely delicate atmosphere. “Clear Major” takes on a more forceful tone, beginning with Taborn’s insistent patterns. The piece is a three-part suite, the volleying first section followed by the lurching rhythms of the middle and the intricately woven lines of the final – each movement separated by clamorous improvisations that deconstruct the composition in order to rebuild again. The complex “I Need More” proceeds at a brisk pace rife with tension, finally exploding into Frisell’s razor-sharp, searing solo.

Interpretation is central to Ches Smith’s compositional approach, and here it yields absolutely breathtaking results. “Bill, Mat and Craig can all turn the ensemble in a new direction on a dime by playing one phrase,” Smith says. “What I love about this band is the way that over time, they’ll all change their parts – Craig adding harmony or Mat embellishing the written material to keep it fresh. I’ve played with the two of them a lot over the years, but the music turns out different every time. And I know Bill’s playing very well, but he constantly surprised me. Interpret It Well is really my way of encouraging them – it could be the unspoken credo of the band.” 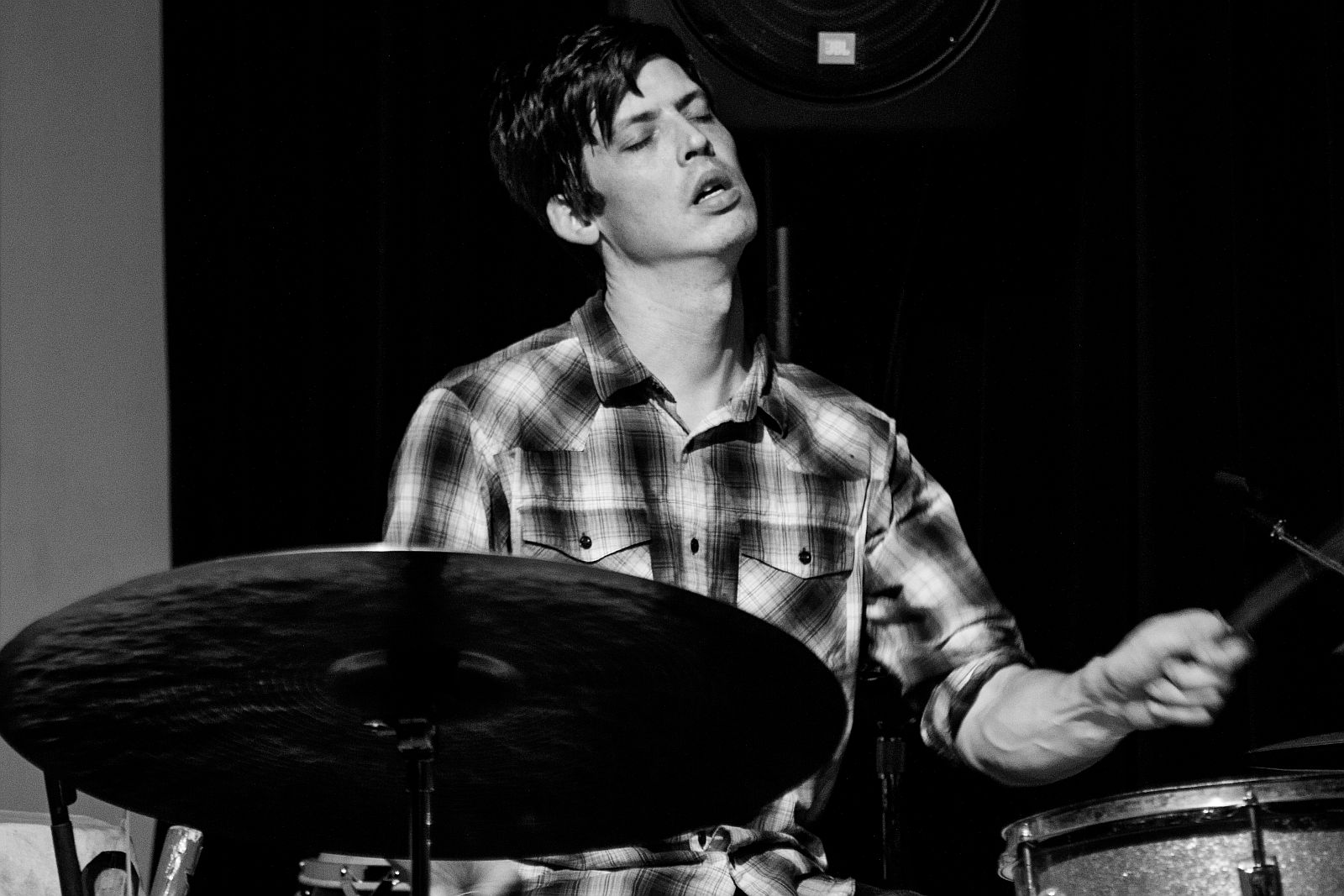 Ches Smith
The 2021 release by his Vodou-inspired project We All Break, Path of Seven Colors, was named best jazz album of the year by The Guardian and was ranked #7 among all the year’s releases in the international 2021 Jazz Critics Poll.Originally from Sacramento, California, Ches Smith is a drummer, percussionist, and composer based in New York. He has collaborated with a host of artists on many scenes since the early 2000s, including Marc Ribot, Tim Berne, John Zorn, Darius Jones, David Torn, John Tchicai, Nels Cline, Mary Halvorson, Trevor Dunn, Terry Riley, Kris Davis, Dave Holland, Secret Chiefs 3, Xiu Xiu, Good for Cows, Theory of Ruin, and Mr. Bungle, among others. He has nine records to his name as a bandleader that feature his writing and ensemble curation, and is a devout student of Haitian Vodou drums, performing in religious and folkloric contexts in New York and Haiti for the last decade.

Pyroclastic Records
Pianist-composer Kris Davis founded Pyroclastic Records in 2016 to serve the release of her acclaimed recordings Duopoly, Octopus (with Craig Taborn) and Diatom Ribbons with the goal of growing the label into a thriving platform to serve cutting-edge artists. In 2019, Davis launched a nonprofit to support those artists whose expression flourishes beyond the commercial sphere. By supporting their creative efforts, Pyroclastic empowers emerging and established artists — including those on its 2022 roster: Tony Malaby, Ches Smith, Nate Wooley, Kris Davis and Trevor Dunn — to continue challenging conventional genre-labeling within their fields. Pyroclastic also seeks to galvanize and grow a creative community, providing opportunities, supporting diversity and expanding the audience for noncommercial art. Additionally, its albums often feature artwork by prominent visual artists—Julian Charriére, Dike Blair, Mimi Chakarova, Jim Campbell and Raymond Pettibon among recent examples.