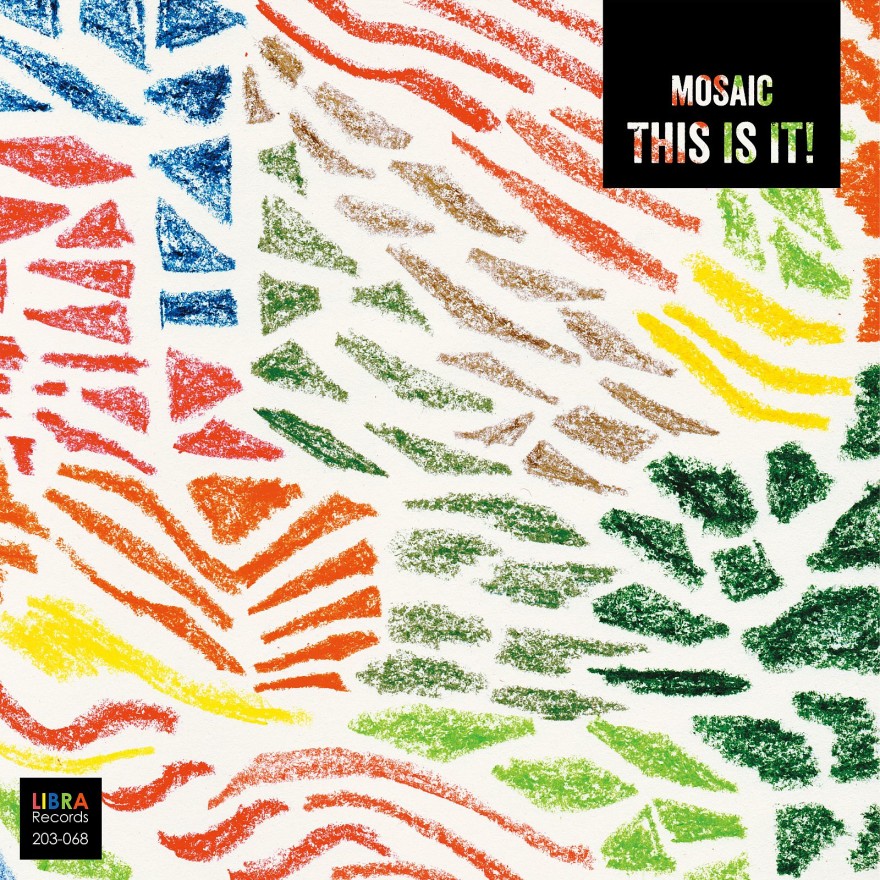 Pianist-composer Satoko Fujii records live via the internet for the first time with her trio “This Is It!”

“…can’t get much closer to improvisational music perfection” — Victor Aaron, Something Else!

“This project…has lifted her artistry to a new level…. Always fresh, always adventurous.” — Dan McClenaghan, All About Jazz

Pianist-composer Satoko Fujii hasn’t let the global pandemic slow her down. She’s recorded solo and duet albums at home and made others by swapping sound files over the internet. Now comes Mosaic, her new album with her trio This Is It!, her first pandemic album made in real time with one band member in a remote location. With drummer Takashi Itani 400 miles away in a Tokyo suburb and Fujii and trumpeter Natsuki Tamura at home together in Kobe, they overcame technical and artistic challenges to capture the buoyant, interactive spirit of their live performances. “This pandemic pushed me to find new ways to create that I have never tried before,” Fujii says. “Nothing can stop us from making music!”

Fujii missed the opportunity to record the band live last year. “I had two shows in 2020, both at Pit Inn. The first day, I played with my Tokyo Trio and that was recorded and released as Moon on the Lake. On the second day, I played with This is It!, but I didn’t record it. I really regret that now.” However, from the beginning of the pandemic, the trio rehearsed online several times and enjoyed it. “I can make music exchanging files online,” Fujii says, “but this trio plays spontaneous improvisation and needs the inspiration that we get when we play together. So we decided to record a session on the internet.”

They discovered that it was not the same as performing and recording in person. For one thing, internet connections can sometimes delay the transmission of sound and they needed to compensate for that when it happened. Fujii found there was another challenge as well. “I had to consciously concentrate more on listening,” she said. “If we play in the same room, listening is as natural as breathing, I’m almost unaware that I’m doing it. But on the internet, it was not like breathing. My ears worked like listening carefully to another language; it required a little extra effort. But we found we could make music in this way.”

Indeed they can. The album bubbles over with the joy of music making, the sheer delight they take in challenging and supporting one another. They play with fierce urgency on “Habana’s Dream,” feeding off each other in a multi-layered ensemble performance. It features Fujii at her most percussive and explosive, with Tamura and Itani alternating brilliant flashes of sound and color with darker, grittier passages. “Dieser Zug,” featuring Itani on vibes, is a lovely construction of contrasting parts. In one section, Itani’s sparkling vibraphone dances around Fujii’s percussive note clusters as Tamura weaves soft low tones between them. It’s a stellar display of the ways in which the trio interlocks their ideas with compelling clarity and balance. The trio initially uses the melody of Fujii’s “Kumazemi” to guide their improvising, but they gradually move far afield from it, exploring timbre and sound as they build tension and momentum. “Sleepless Night” is a dark tone poem, with Itani’s metallic clicking and clattering making a disturbing racket as Fujii and Tamura engage in a troubled dialogue. “76 RH” takes the album out with a burst of energy, blending Fujii’s composition seamlessly with full-on free improvisation. If working virtually posed challenges for this group, it doesn’t show. 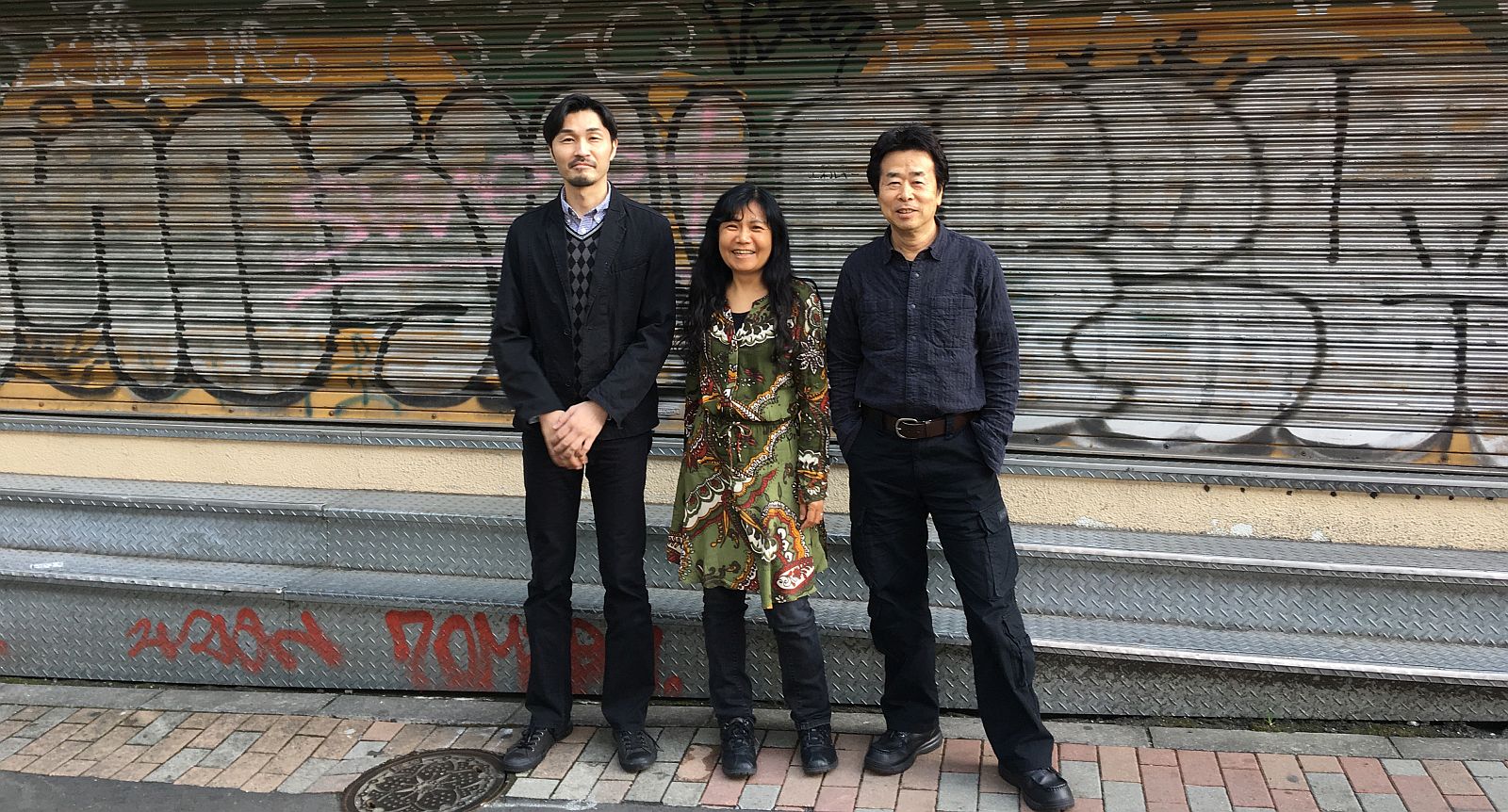 Trumpeter and composer Natsuki Tamura is internationally recognized for his unique musical vocabulary blending extended techniques with jazz lyricism. This unpredictable virtuoso “has some of the stark, melancholy lyricism of Miles, the bristling rage of late ’60s Freddie Hubbard and a dollop of the extended techniques of Wadada Leo Smith and Lester Bowie,” observes Mark Keresman of JazzReview.com. Throughout his career, Tamura has led bands with radically different approaches. On one hand, there are avant rock jazz fusion bands like his quartet. In contrast, Tamura has focused on the intersection of folk music and sound abstraction with Gato Libre since 2003. The band’s poetic, quietly surreal performances have been praised for their “surprisingly soft and lyrical beauty,” by Rick Anderson in CD Hotlist. In addition, Tamura and pianist Satoko Fujii have maintained an ongoing duo since 1997. Tamura also collaborates on many of Fujii’s projects, from quartets and trios to big bands. As an unaccompanied soloist, he’s released four CDs, including Koki Solo (2021), in celebration of his 70th birthday. He and Fujii are also members of Kaze, a collaborative quartet with French musicians, trumpeter Christian Pruvost and drummer Peter Orins. “As unconventional as he may be,” notes Marc Chenard in Coda magazine, “Natsuki Tamura is unquestionably one of the most adventurous trumpet players on the scene today.”

Pianist and composer Satoko Fujii, “an improviser of rumbling intensity and generous restraint” (Giovanni Russonello, New York Times), is one of the most original voices in jazz today. For more than 25 years, she has created a unique, personal music that spans many genres, blending jazz, contemporary classical, rock, and traditional Japanese music into an innovative synthesis instantly recognizable as hers alone. A prolific composer for ensembles of all sizes and a performer who has appeared around the world, she was the recipient of a 2020 Instant Award in Improvised Music, in recognition of her “artistic intelligence, independence, and integrity.”

Since she burst onto the scene in 1996, Fujii has led some of the most consistently creative ensembles in modern improvised music. Highlights include a piano trio with Mark Dresser and Jim Black (1997-2009), and an electrifying avant-rock quartet featuring drummer Tatsuya Yoshida of The Ruins (2001-2008). In addition to a wide variety of small groups of different instrumentation, Fujii also performs in a duo with trumpeter Natsuki Tamura, with whom she’s recorded eight albums since 1997. She and Tamura are also one half of the international free-jazz quartet Kaze, which has released five albums since their debut in 2011. Fujii has established herself as one of the world’s leading composers for large jazz ensembles, prompting Cadence magazine to call her “the Ellington of free jazz.”