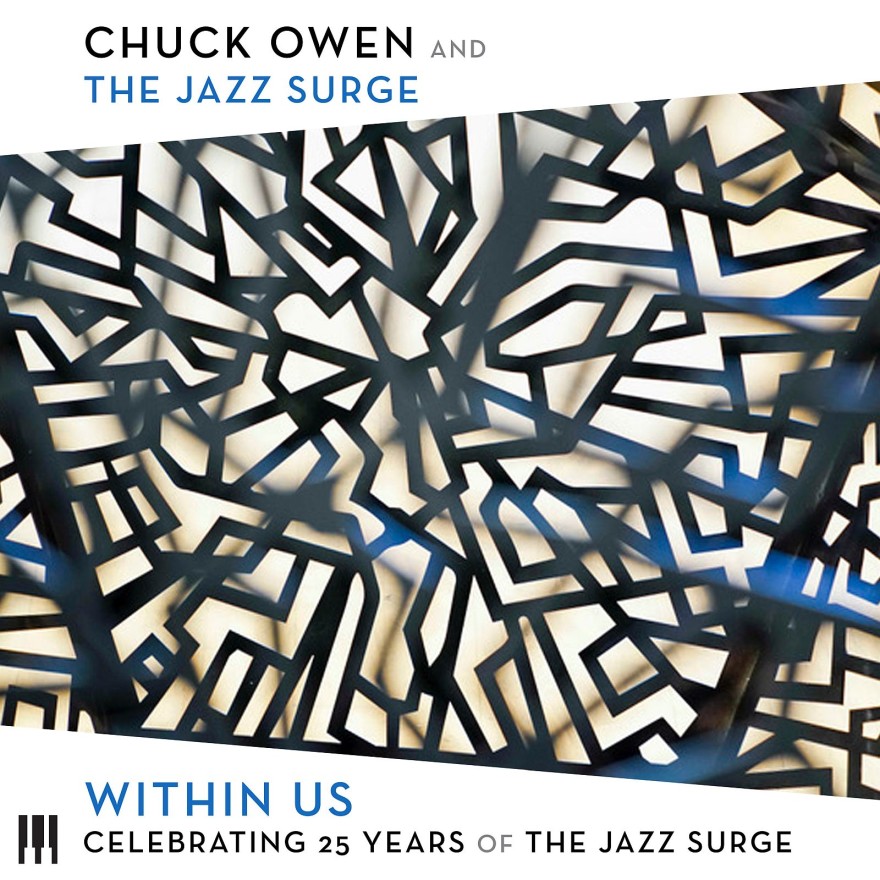 “Owen writes with seductive rhythms in mind and sets aside ample room for earnest blowing by a number of splendid soloists.  Grammy voters, have your pens and pencils ready – again.”
– Jack Bowers, All About Jazz

With the 25th anniversary of his groundbreaking big band, The Jazz Surge, swiftly approaching, Florida-based composer and bandleader Chuck Owen saw an obvious theme for the ensemble’s upcoming seventh album. It’s an impressive landmark for any large ensemble, of course, but especially worth commemorating for one that’s been hailed as “riotous and joyous” (JazzTimes) and “rapturous” (DownBeat), earned seven Grammy nominations, and led its founder to such high-profile opportunities as composing and arranging for the WDR Big Band.

As a global pandemic interfered and delay after delay pushed back the planned recording session, however, a new theme began to emerge. Once this tight-knit group of musicians emerged from quarantine and reunited in the studio in May, there were far more important ideas to express than the mere passage of time. The remarkable new album that emerged, Within Us, is a testament to the vibrant collective identity forged by the band over the past quarter-century.

“For almost everybody in the band, it was the first time they’d recorded with actual people in the same room since the beginning of the pandemic,” Owen recalls. “Just being together became such a joyous occasion. There was an amazing sense of community. Within Us really seemed to represent this sense of what we’d all been through and the inner strength, especially collectively, that drove us through it. We all felt that was worth celebrating once we were on the other side of it.”

Within Us features a stellar 19-piece ensemble, including several members who have been with the Surge since its self-titled 1996 debut, with vibraphone great Warren Wolf joins the band as special guest. Within Us takes its title from an uncharacteristically hopeful quote by the typically darker-toned author and existentialist Albert Camus, from his essay “Return to Tipasa.”

Owen paraphrased the quote, changing the “within me” to the more communal “us,” characteristic of his collaborative nature. The Jazz Surge itself was not originally planned to be a vehicle for his own work, but an extension of his teaching at the University South Florida, an institution from which he’ll retire this summer after 40 years. He’d written an article stressing the importance of jazz repertory in music education, so decided to put his words into action with the founding of the South Eastern Repertory Jazz Ensemble – or, SERJE. After an initial rehearsal using some of his own charts he realized how much fun it was to hear his music played by such a gifted band, and the SERJE ceased being an acronym and became the soundalike Surge.

Owen’s joy in hearing his compositions brought to life by the band remains evident 25 years later. Opener “Chelsea Shuffle” brims with that excitement, even given its somewhat tragic origins. Legendary pianist Chick Corea was originally slated to be the album’s special guest, so Owen arranged this Corea composition to feature him. The pianist’s untimely death leaves the tune as a fittingly exuberant send-off.

It was Corea’s longtime partnership with Gary Burton that turned Owen’s thoughts to the vibraphone, leading to Wolf being recruited as the date’s special guest. His agile playing graces both “Chelsea Shuffle” and Owen’s lush “The Better Claim,” revisiting a piece from the Surge’s 2013 suite River Runs. “Milestones,” of course, is a holdover from the album’s original title. Owen’s arrangement of the Miles Davis classic fuses it with “Surge,” the first composition he ever wrote expressly for the ensemble, bridging the band’s past and present in the span of one tune.

Other pieces look nostalgically back while gazing resolutely forward with a tentative optimism, befitting both the album’s status as an anniversary celebration as well as its tribute to the band’s strong resolution. “Trail of the Ancients” and “Apalachicola” both ruminate on Owen’s love of and concern for the environment, while “American Noir” is a cynically hopeful recap of recent political turmoil inspired by Chinatown soundtrack composer Jerry Goldsmith. “Sparks Fly” and the title track (subtitled “An Invincible Summer”) are both more direct tributes to Owen’s dedicated bandmates.

“I’m incredibly grateful to be commemorating 25 years with this band,” Owen concludes. “It really changed the trajectory of my career and gave me a newfound focus for my writing. I now had specific people that I was writing for, and through them I discovered so many things. Ultimately it’s allowed me to take more artistic risks based on the fact that I have wonderful musicians that are willing to go on the ride with me.”

Central Florida-based Chuck Owen has been a revered composer and bandleader as well as a committed, passionate and nationally respected jazz educator for over 40 years. Thoughtful, creative, evocative, and intensely personal, his compositions and arrangements are steeped in the jazz tradition but draw liberally and often playfully from a diverse array of additional influences that include contemporary classical, American folk/roots music, Latin, funk, hip-hop and even country music. Since founding it in 1995, Owen’s primary creative outlet has been the 19-piece Jazz Surge, and he has served as conductor, primary composer/arranger, and producer of all of its highly feted releases, which have garnered seven GRAMMY nominations. His compositional talents have also been recognized by a Guggenheim Fellowship. During its history the Surge has hosted such special guests as Chick Corea, Joe Lovano, Randy Brecker, Bob Brookmeyer, John Clayton, Dave Douglas and Gerald Wilson, among many others