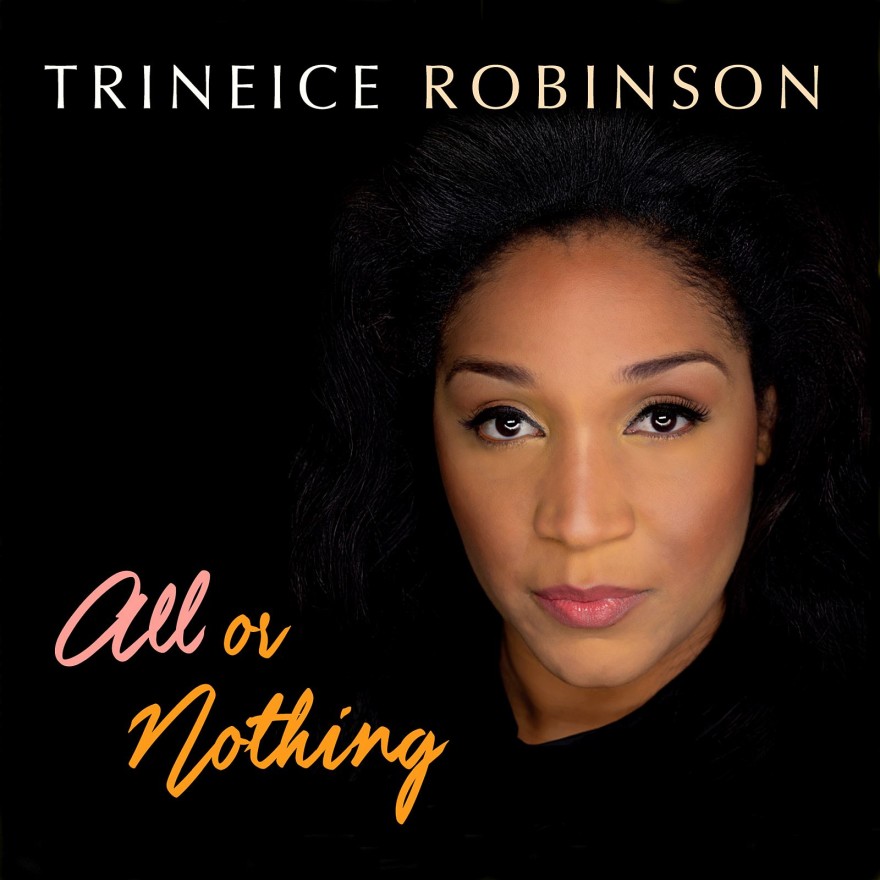 “With the right sass and style to be a first class jazz vocalist, this later in life debut hits all the right notes throughout.” – Chris Spector, Midwest Record

“soulful , warm, intense, with daring improvisation in her scat – singing, bringing out a certainty of joy and celebration…. a production that reveals from the beginning its aspirations and achieves them to the fullest extent.”  – Phontas Troussas, Vinylmine

All Or Nothing, brings together a lifetime of experience and influences from jazz, R&B, gospel and classical music with an all-star band featuring Don Braden, Cyrus Chestnut, Kenny Davis and Vince Ector, along with guest appearances by pianist Phil Orr, guitarist Joe “Stretch” Vinson, percussionist Kahlil Kwame Bell and the horn section of Ian Kaufman, John Meko and Nils Mossblad, as well as her children Laura-Simone Martin and Lindsay Martin Jr. who lend a sweetness and charm to Robinson’s gospel-inspired original, “Let It Shine.”

With the release of All Or Nothing, vocalist Trineice Robinson crosses off a major item on her bucket list, finally releasing her debut album at the age of 40. Belated though her emergence into the spotlight may be, Robinson does so with the confidence and dazzling range of a performer who’s invested a lifetime in her craft.

It also must be one of the last unfulfilled dreams on that bucket list: she’s already enjoyed a career as a renowned educator and researcher, developing her pioneering Soul Ingredients® teaching methodology to remedy the lack of Black music traditions represented in the field of voice pedagogy; and she’s raised two children, both of whom sing along with her on All Or Nothing.

Robinson’s path has crossed these musicians at a variety of junctures throughout her career as an educator and performer. Some of them are colleagues from Princeton University, where she is a member of the Jazz faculty; others have been connections made through her travels as a scholar and researcher; others are longtime collaborators on the local music scene where Robinson has plied her trade while focused on her teaching. And of course there are her children, Laura-Simone Martin and Lindsay Martin Jr., who lend a sweetness and charm to Robinson’s gospel-inspired original, “Let It Shine.”

“I tried to engage people that are a part of my journey,” she explains. “Whether it’s my family or my colleagues, these are all people that I felt understood my vision and could help me be better at me being me. I got people that helped me shine.”

The music on All Or Nothing, a blend of standards, jazz classics, R&B/soul favorites and original songs, reflects Robinson’s diverse tastes and interests. In fact, it was her restless desire to explore beyond the narrow confines of a single defined genre that led her down the circuitous path to All Or Nothing.

Her entire career in academia was a result of not being able to find those answers when vocal pedagogy was decidedly focused on the European classical tradition. She eventually remedied that with Soul Ingredients®, which encourages vocalists to find their own personal blend of influences and autobiography in their approach to singing. “The ingredients I talk about are the components that people use for self-expression,” Robinson explains. “When you understand how ingredients are used in a dish, you can create whatever dish you want.”

Robinson’s own passion for music began in Oakland, California, where she came from generations of clergy. Though she began singing in church, she resisted following in those footsteps, instead starting college as an engineering major. The urge to sing wasn’t quelled for long, however, and she eventually earned her master’s in jazz studies at Indiana University-Bloomington, where she studied with Dr. David Baker, and her doctorate in music education at Teachers College Columbia University.

The wholeheartedness with which she attacks every aspect of her career is reflected in the title of All Or Nothing, taken from the standard that opens the album. Braden’s forceful, abbreviated arrangement underlines the fervency of Robinson’s attitude as she takes on this next challenge. The singer’s take on Wayne Shorter’s “Footprints,” with lyrics by former student Nandita Rao, focuses on the crucial idea of legacy. “I’m always talking about legacy,” Robinsons says. “What are you leaving behind? Do you realize you have the power and the responsibility to make a difference?”

Robinson’s love of classic soul shines through on her silken rendition of Marvin Gaye’s “What’s Going On?” The subtle addition of “hoodies” to the lyric updates the song’s lament to the current day. “We’re still singing the same songs and telling the same stories,” Robinson says tersely regarding the racial struggles that remain relevant a half century after the original song’s release. Some respite from that pain is provided by Duke Ellington’s revered “Come Sunday,” an intimate duet by Robinson and Chestnut that, she says, “definitely brings out my church influences… The concept behind it is that no matter what’s going on, on Sunday things are going to make sense, even for a couple of hours.”

Robinson’s “mini-song,” “If This Is Love,” leads into “The Very Thought of You,” on which she and Braden alternate burnishing the melody. Both that and especially “Save Your Love For Me” were chosen in homage to Robinson’s favorite singer, the great Nancy Wilson, who passed away as she was working on the album. Another hero, Carmen McRae, is echoed on the Thelonious Monk tune “You Know Who (I Mean You).” She showcases her transfixing way with a ballad on the McCoy Tyner/Sammy Cahn collaboration “You Taught My Heart To Sing,” and a tropical soul feel on Natalie Cole’s sunny “La Costa.” The album ends with the brassy gospel of “Let It Shine,” save for a brief, heartwarming coda from 10-year old Lindsay Martin Jr.

Jazz, gospel, R&B, classical – Robinson combines ingredients from all of this music into the rich, expressive stew that makes All Or Nothing a bountiful feast for the listener. Combine all of that with her vivid emotional delivery and the unapologetic way she makes every lyric so deeply personal makes this a stunning debut well worth waiting for.

Dr. Trineice Robinson-Martin has dedicated her career to performing and developing resources for teaching jazz, gospel/Christian, R&B, rock, country, and pop singing styles in an applied/private voice lesson setting. In addition to releasing her debut album, All Or Nothing, she maintains a busy schedule as a singer in a variety of styles while holding a faculty position at Princeton University as the jazz voice instructor, lecturer, and director of the Jazz Vocal Collective Ensemble. She serves on the National Faculty in the academic division of Gospel Music Workshop of America, serves as the Executive Director of the African American Jazz Caucus, Inc., serves as a Board of Director for the Jazz Education Network, serves on the Editorial Board of the Journal of Singing, and is a member of the distinguished American Academy of Teachers of Singing. Dr. Trineice created Soul Ingredients®, a teaching methodology for developing a singer’s musical style/interpretation in African American folk based music styles (i.e. jazz, gospel, R&B, blues, etc.). This methodology shows students how to take their personal experiences, musical influences and models, and execute the different components in a manner that is personal to the singer/performer’s own personal expression.