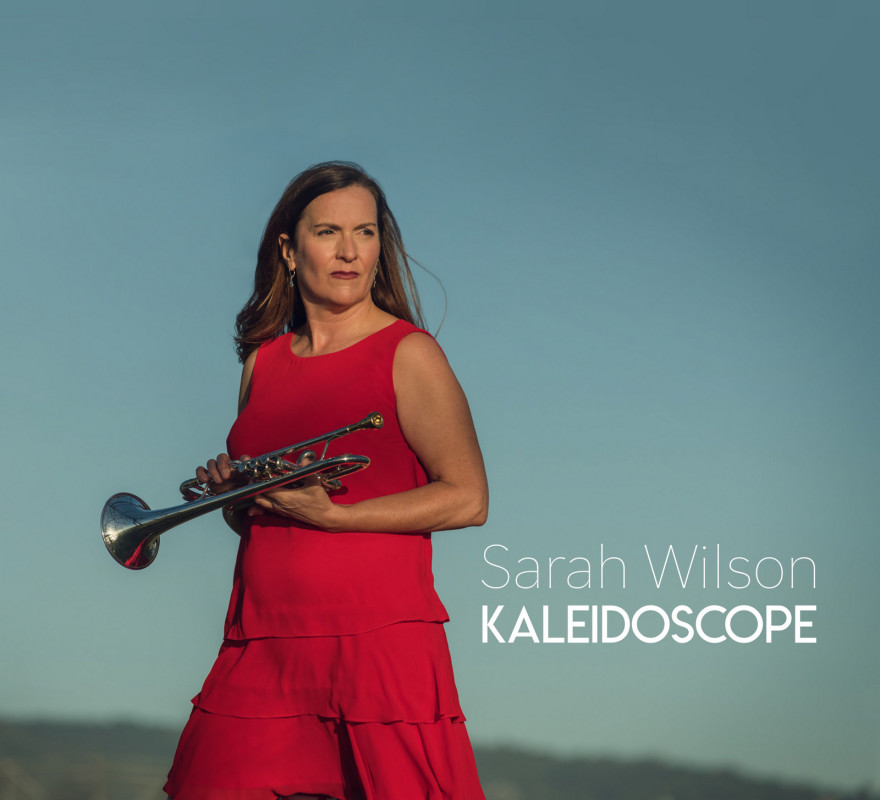 ”…one of the most intriguing and promising composers and trumpeters on the contemporary music scene.“ – Derk Richardson, San Francisco Chronicle

At its best music is an act of generosity that flows from creative camaraderie. Slated for release on July 16, 2021 via Brass Tonic Records, Sarah Wilson’s third album Kaleidoscope results from that kind of rarefied communion. The San Francisco Bay Area trumpeter, vocalist, and composer wrote and recorded the music in a spirit of gratitude inspired by some of the key figures in her creative life. She’s joined by a nonpareil cast of improvisers, including pianist Myra Melford, drummer Matt Wilson, violinist Charles Burnham, bassist Jerome Harris, and guitarist John Schott.

While deeply shaped by jazz, Wilson’s music owes as much to avant pop, Afro-Latin grooves and indie rock as the post-bop continuum. Evidencing her profound gift for musical storytelling, Kaleidoscope reflects Wilson’s background composing scores for puppet shows and theatrical productions. Not every piece is dedicated to a mentor or creative beacon, “but this record is about the people who have supported me,” says Wilson, who like so many musicians has gone more than a year without performing. “At a time when putting out an album is a minor miracle, this is music about buoying each other up.”

“>As the name implies, Kaleidoscope embraces multiple views, approaches and personalities. The album opens with “Aspiration,” a gently descending melody that seems to defy gravity as Burnham’s violin doubles Wilson’s gleaming horn. Dedicated to Renee Baldocchi, who was Director of Public Programs at San Francisco’s de Young Museum, the piece was inspired by the Aaron Douglas painting that provided the creative blueprint for Wilson’s score for “Off the Walls,” the aerial dance production that concluded her fellowship at the de Young. If “Aspiration” serves as the album’s benediction, “Presence” is a joyous, calypso-tinged tune that announces that the celebration is underway. Written for Carla Bley, the piece was inspired by “Major,” the opening track on her 1999 album of duets with bassist and partner Steve Swallow, Are We There Yet?

Wilson’s winsome song “Young Woman” features her beguiling vocals and evocative lyrics. It’s one of several pieces inspired by Myra Melford, a close friend and mentor. The quietly majestic “With Grace” is another piece written with Melford in mind. Composed while Wilson was on a Djerassi artist residency, the melody conjures the rugged California coast south of San Francisco. She was listening to Melford’s music in a very different setting, the possibly haunted 19th century resort Stags’ Leap Winery in Napa, when she wrote “Night Still,” a mysterious theme that features Burnham’s achingly beautiful violin.

“It wasn’t long after I heard about Myra in the early 1990s that she became my hero,” Wilson says. “She was such an inspiration. I loved her composing and I had a few lessons with her studying Threadgill’s technique. We’d go on walks in Prospect Park. But I had quit the trumpet and was hardly playing at all. She said ‘You have to play your music. This needs to be performed as concert music.’ I’m not sure if I would have had the strength without her support. That was so important.”

Another essential supporter and music mentor was Paul Caputo, and Wilson dedicates the bright, delicately filigreed tune “Color” to the widely esteemed Schoenberg scholar. The piece features Schott, a brilliant guitarist who has created a vast array of music outside of the near-legendary Grammy-nominated post-bop/funk band T.J. Kirk. He also contributes a tightly coiled, stinging solo on the title track, which Wilson dedicated to Peck Allmond, Tony Scherr and Kenny Wollesen, key collaborators during her New York years. She brings luminous intensity to her vocal rendition of M. Ward’s “Lullaby + Exile,” and closes the album with “Go,” a celebratory Cuban-inflected tribute to Laurie Frink, the late, legendary trumpeter and brass teacher.

A project many years in the making, Kaleidoscope is a creative dispatch from an artist on an unlikely path. A lapsed high school trumpet player, Wilson didn’t come to music through the usual channels. As an undergraduate anthropology major at the University of California, Berkeley, Wilson took a strong interest in theater. A visiting artist from Vermont’s globe-trotting Bread and Puppet Theater inspired her to move east to work on their spectacular giant-puppet productions after graduation. She spent two years as a member of the troupe as her responsibilities expanded to encompass conducting, arranging and performing music for their shows. In 1993, she moved to New York City to concentrate on music, studying with trumpeters John McNeil and Laurie Frink.

Through her affiliation with Bread and Puppet Theater she soon found herself musical director and composer of Lincoln Center’s Out of Doors Festival’s annual puppet program. “At the time, I didn’t really have any formal training or experience composing,” Wilson says. “I didn’t know much harmony, so I would just write these melodic bass lines and layer contrapuntal melodies on top of them. I was really into Afro-Cuban music and Henry Threadgill and Steve Coleman, so everything had a really strong rhythmic base, sometimes with odd meters. I’ve formally studied music since then, but my basic composing approach hasn’t changed much.”

Wilson absorbed other sources of inspiration from the eclectic downtown New York new music scene of the 1990s, while connecting with plenty of open-minded musicians. “I was fortunate to find these amazing musicians, like Kenny Wollesen, Peck Allmond, Tony Scherr, and others who liked my work precisely because it was different and original.”

To further blur stylistic boundaries, Wilson began singing and writing her own songs in 2000. “My mom died that year, and I gave up the trumpet,” she says. “I listened to the radio a lot and I started writing songs. It was distracting, soothing as I was dealing with this terrible loss in my life.” She introduced the new material at Performance Space 122, realizing afterwards “that singing gave me this intimate connection with the audience and I felt relaxed doing it,” Wilson says. “It is another avenue for my music to travel down.”

She released her first album, Music for an Imaginary Play (Evander Music), in 2006, earning sterling reviews with her picaresque compositions. Featuring Wilson on trumpet and vocals, Peck Allmond on tenor sax, Steve Cardenas on electric guitar, Jerome Harris on bass and Kenny Wollesen on drums, the project was drawn directly from her many years of writing music for puppet theater.

She followed up with 2010’s Trapeze Project (Brass Tonic Records), an album inspired by a sense of dislocation and freedom after moving from New York to the Bay Area in 2005. Drawing on a far-flung array of sounds from Balkan and Persian folk music to New Orleans jazz, marching bands, blues, and pop music, she developed tunes that sounded utterly personal and unmoored to prevailing jazz fashions. Once again she convened an inimitable cast, including Melford, Harris, clarinetist Ben Goldberg and drummer Scott Amendola.

Wilson has spent the past decade developing programs for a variety of museums and institutions. Her latest project is a music production for The Tenderloin Museum. Collaborating with Larkin Street Youth Services, a long-standing non-profit organization serving homeless youth based in one of San Francisco’s most poverty-stricken, challenged neighborhoods, “Tenderloin Voices” brings their stories to life through writing workshops and musical performance.

The music on Kaleidoscope was created with support from the de Young Museum Artist Fellows program with commission funding from Wallace Alexander Gerbode Foundation and The William and Flora Hewlett Foundation, Center for Cultural Innovation, Zellerbach Family Foundation and many generous donors. At a time when the music scene is facing an unprecedented crisis, Wilson offers a candle in the darkness. “The theme of this music is that it makes me happy,” she says. That’s a view that works from any angle.