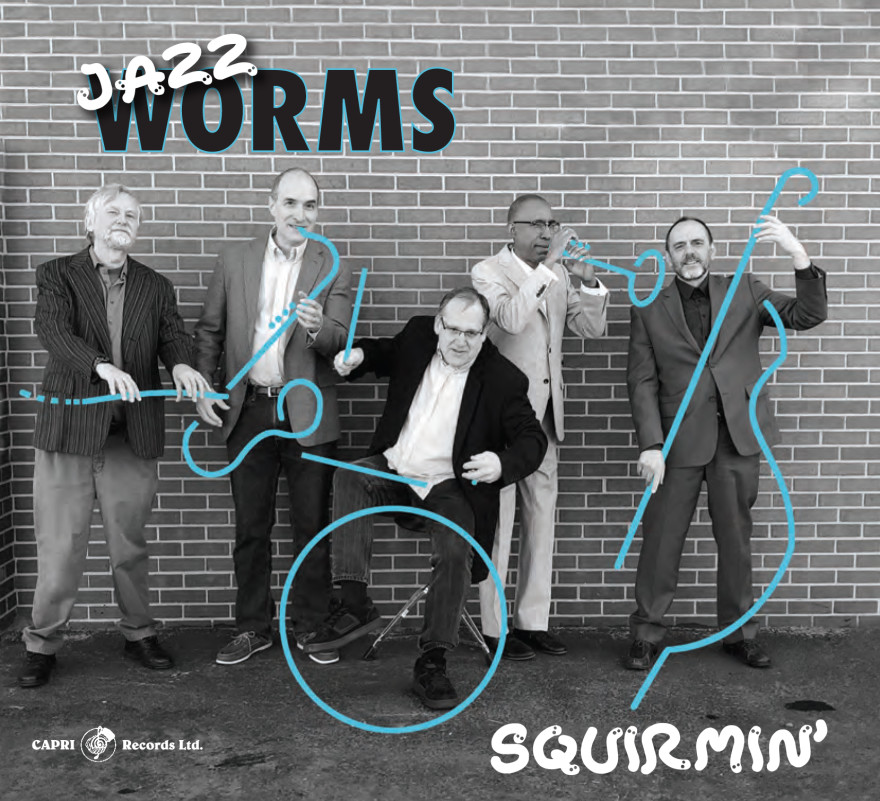 More than 30 years after the release of their acclaimed debut album, Denver-based quintet the Jazz WORMS make their belated return with Squirmin’, due out March 19, 2021 via Capri Records. Well worth waiting for, the thrilling new session reconvenes all five original WORMS – pianist Andy Weyl, saxophonist Keith Oxman, drummer Paul Romaine, cornetist Ron Miles and bassist Mark Simon – on an invigorating set of all-new material that picks up where the band left off three decades earlier.

Just as their 1987 debut, Crawling Out, made species-appropriate reference to the emergence of five new voices on the jazz scene, so Squirmin’ captures the sense of eager anticipation and urgency that marks this long-overdue sophomore effort. Both the continuity and the passage of time are reflected by the album cover, which replicates its predecessor with a bit more gray hair and an updated fashion sense. 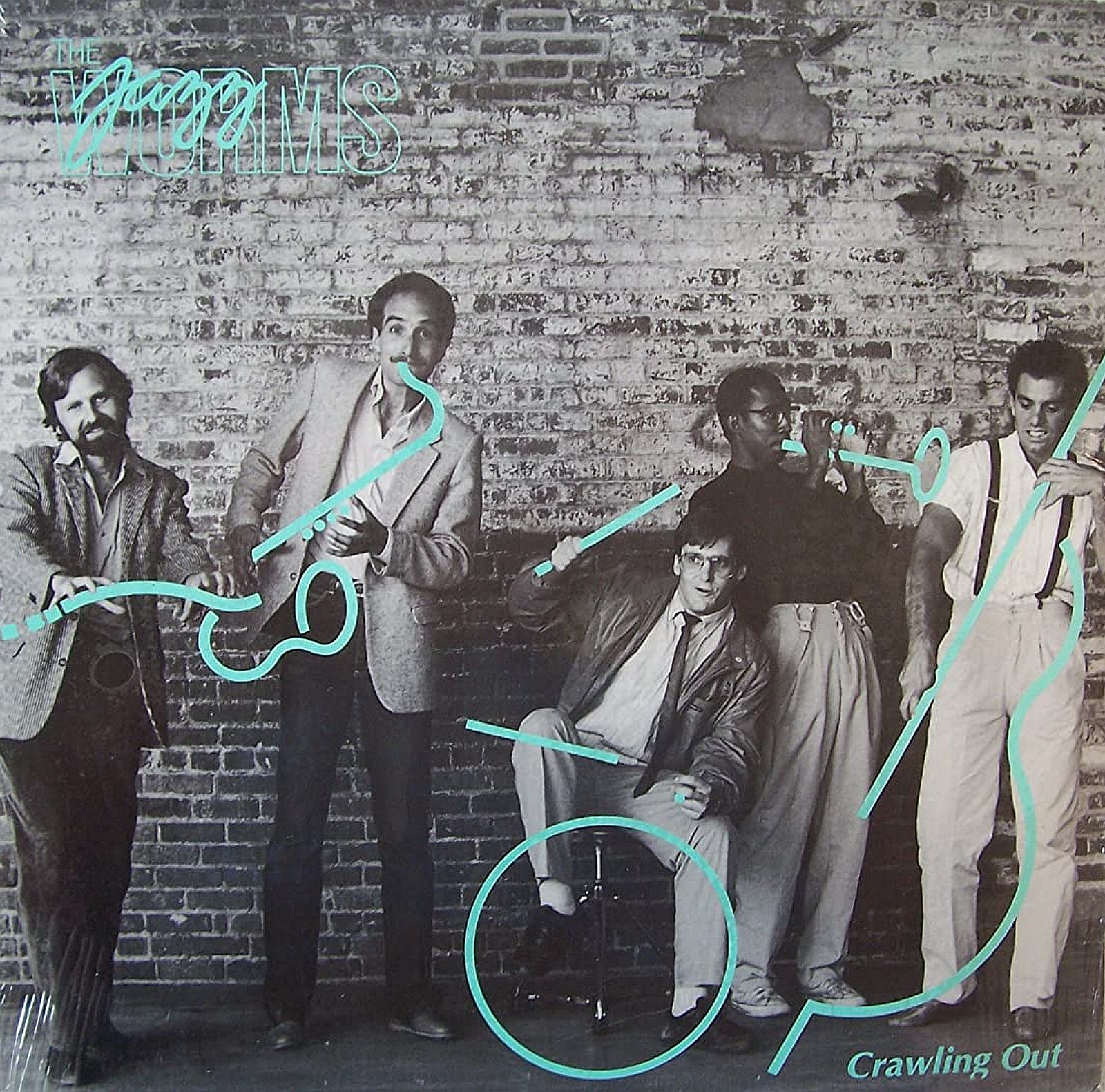 “I think Crawling Out made a mark of some sort,” says Oxman with a fair degree of understatement. “I run into people all the time who say, ‘I still have that original vinyl,’ or ‘I used to love hearing you guys play.’ So it feels marvelous to be together again.”

The long hiatus can be chalked up to the fact that each of the WORMS has enjoyed a busy and fruitful career in his own right. Oxman is a mainstay of the Denver scene who has recorded albums with such legends as Charles McPherson, Dave Liebman and Houston Person in addition to being a highly influential educator at the city’s East High School. Miles has become one of the most acclaimed artists on the current jazz scene, recording his own albums for Blue Note while forging meaningful collaborations with greats like Bill Frisell, Jason Moran, Brian Blade and Joshua Redman. Weyl has toured the world with the vocal group Rare Silk and crossed paths with such artists of note as James Moody, Tom Harrell, Benny Golson and Eddie Harris. Romaine and Simon co-founded the Colorado supergroup Convergence.

But when they first joined forces in the early 1980s, the WORMS (the name is an acronym for their respective last names) were simply five rising stars on the Denver jazz scene eager to find opportunities to craft an original sound. “We all grew up together,” reflects Oxman. “We were all young guys coming up at the same time who had similar ideas about music and just enjoyed playing together.” After a few years, however, each found himself on a separate path until a 2014 reunion concert at the revered Denver jazz club Dazzle revealed that the old chemistry was intact.

Squirmin’ not only fulfills the band members’ long-held desire to recapture the magic, it also marks the realization of a dream for Capri Records founder Thomas Burns, who was himself in the early stages of a remarkable career as a label owner, promoter, photographer, writer and entrepreneur. “I really wanted to record their first album, but [vocalist and label owner] James Van Buren beat me to it,” Burns recalls. “The Jazz WORMS had such a different sound for that period of time, when most jazz musicians in Denver were still looking back at the classic jazz of Ben Webster and Coleman Hawkins. To hear a group of young guys at the time just blowin’ their asses off was really exciting.”

That sound still feels vital and current today, realized through eight captivating new compositions. The album kicks off, appropriately enough, with Simon’s sizzling “Launching Pad,” on which he and Romaine lay down a muscular groove punctuated by knife-edged horn lines. Simon also contributed the jaunty “What If All?” which spurs graceful melodic flights from Weyl and Miles. Romaine’s two pieces were inspired by his pet birds – and, in the case of “Wheaty Bowl,” one iconic Bird: Charlie Parker, who Wheaty can apparently chirp along to and whose memorable compositions are quoted throughout the piece. “Bu’s Box,” meanwhile, reference Bu’s cardboard home, which supplements Romaine’s percussive arsenal on the tune itself.

Oxman’s new compositions are both dedications. “Joaquin” is something of a companion piece to an earlier tune, “Elena,” recorded with Charles McPherson. That piece was written for a close friend’s granddaughter; “Joaquin” is for the same friend’s grandson, and captures the sense of wonder and tenderness evoked by a newborn. “The Chimento Files,” which closes the album, is a simmering blues dedicated to one of Oxman’s East High colleagues, Alan Chimento. Weyl’s pair of offerings range from the blistering “Lickity-Split” to the wistful, self-explanatory “Balladesque.”

The results of this welcome rebirth exceeded expectations. “It was magical,” Burns says. “I love the way these guys interact. They seem symbiotic: they speak as one, they listen to one another, all the stuff that they teach about jazz musicians – they have it. They always shine as a group.”

“I’m thrilled about this album,” Oxman says. “I think it’s even better than the first one. I think that’s mostly due to the fact that we all truly love each other and love playing together, even though it’s sometimes been difficult to get us all in one room.”

Formed in 1984, the Jazz WORMS emerged from the thriving Denver jazz scene of the era, bringing together five young musicians who would go on to make great strides as artists and educators in the ensuing decades: pianist Andy Weyl, saxophonist Keith Oxman, drummer Paul Romain, cornetist Ron Miles, and bassist Mark Simon. The quintet recorded a single album, 1987’s Crawling Out, before going their separate ways. A 2014 reunion concert reignited the spark, providing the opportunity for a rare second act for this adventurous and witty ensemble.